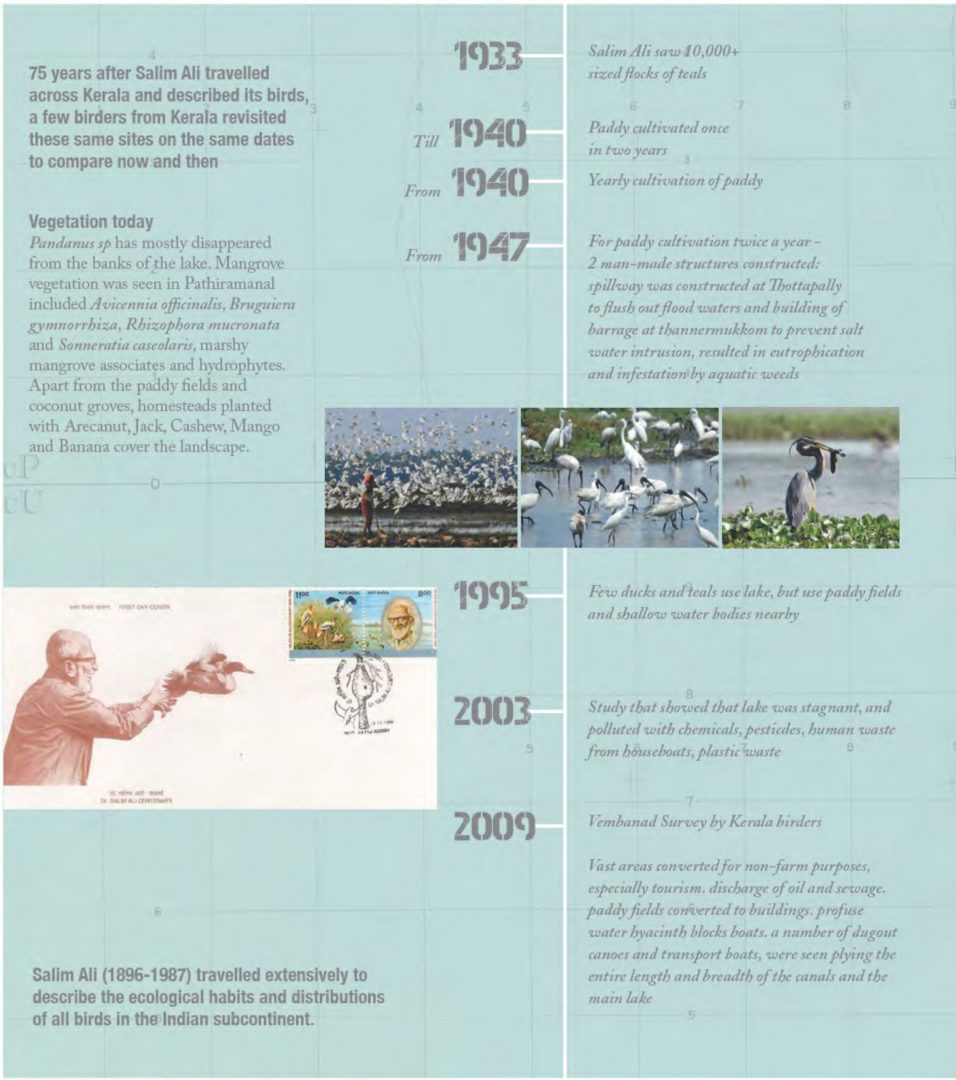 “A fairly large town … surrounded by extensive cocoanut and paddy cultivation. Canals connect the town on the western side with the Vembanad Lake, a large backwater lagoon. The water in this lake is brackish except for a couple of months during the monsoon when it is said to be potable. All around the margin of this lake are extensive cocoanut plantations and paddy cultivation. The paddy lands are below the level of the lake and the water has to be kept out by laboriously constructed dykes. A species of Pandanus is largely grown on these dykes or bunds its roots acting as reinforcement material and helping to hold the mud from being washed away. The paddy lands are left fallow every alternate year. The dyke is breached and water allowed to flow in and completely submerge the land.

Ploughing in the submerged fields is done by means of buffaloes whose backs and snouts alone show as little ridges above the surface of the water while the ploughman walks behind them often immersed to his chest. Two crops are sown and gathered in quick succession between the end of the SW monsoon and its commencement next year. The bunds or portions of them with the tall grass and Pandanus stand out like little islets, forming ideal haunts for Acrocephalus stentoreus and Prinia inornata and offering favourite nesting sites to Ploceus manyar. The backwater canals are lined with cocoanut, Pandanus, Thespesia populnea, and Cerbera odollam trees, the last with white flowers and round green fruits of the size of tennis balls.

Beyond the paddy fields and in among the cocoanut groves are little habitations and homesteads surrounded by trees of Areca-nut, Jack-fruit, Cashew, Mango and Banana. In this facies are to be found such birds as Leucocirca, Tehitrea, Molpates, Mynas, Parakeets, Lorikeets, Striated Munias and the like.

The places visited in Vembanad Lake were: Aleppey, Kumaragam and Munro Island (Padiramanal). The first is a seaport and a busy trade centre. Kumaragam is one vast expanse of cocoanuts and paddy with huts here and there surrounded by bananas and jack. It was here that the first lot of Psittacula krameri in Travancore was met. Munroe Island is a flat oval piece of land, 8-10 miles west of Kottayam, under paddy and cocoanut. It is cut up with irrigation channels or trenches for watering the young cocoanuts, whose banks are in places covered with Pandanus tangles, as are also the edges of the island itself for the most part. In the paddy-fields here, snipe are plentiful.

Vembanad Lake has crystal clear water through which the sandy bottom (8-10 ft. or more) below is clearly visible. It is on the whole a disappointing place from the ornithological point of view as it presents an open expanse of water for many miles in every direction with no sandbanks or reed-covered islets. Except for some gulls and terns and one or two gigantic flocks (10,000 or more) of teals – chiefly Garganey, and a few Whistlers – little else was noted.”

For further information, read Sashikumar et al, 2011, along the trail of Salim Ali; A study of avifauna, their habitat and ecological history” Kerala Forest Department 2011