The paradox of militarised conservation and justice in decentralised forestry 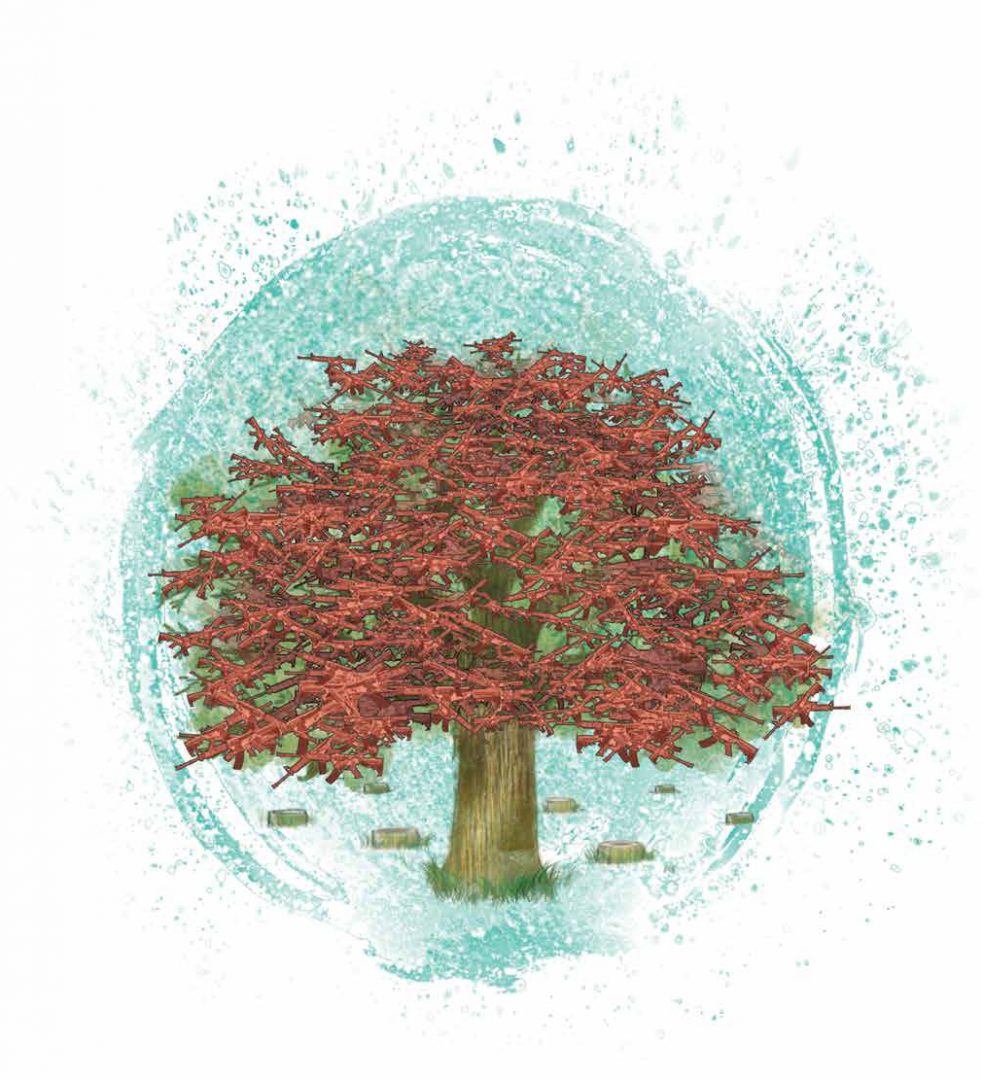 I have recently observed a growing trend of illegal resource utilisation that is countered with armed responses across East Africa’s protected areas. Various local and international media link illegal logging with devastation and extinction of tree species and forests. A recent UNEP and INTERPOL report, titled ‘The Environmental Crime Crisis’, sees illegal logging and associated crimes as threats to human well-being and the broad sustainability agenda. It is especially interesting to note how governments and conservation organisations have responded. There are both news articles and academic discussions documenting an emphasised use of military and paramilitary tactics against illegal resource utilisation. The tactics’ advocates claim that as illegal resource extraction is becoming more sophisticated, armed and well organised, the use of militarised counter-measures is necessary. To show how seriously they are, in June 2014, high-level government representatives from Kenya, Tanzania and Uganda announced their intention to curb armed illegal logging with the help of the INTERPOL through the East Africa Initiative on Illegal Timber Trade and REDD+. Likewise, in a recent budget speech, one heard the minister of natural resources and tourism in Tanzania proudly talking about the ministry’s plan to involve the Tanzania Police Force in controlling illegal logging. In the recent final evaluation report of REDD+ pilot projects in Tanzania, there was a recommendation about military training for local forest rangers to enable their ‘self-defence’ against armed and aggressive illegal loggers when carrying out forest patrols and monitoring.

As a political ecology researcher, I see the trend and resulting counter-measures as interesting ‘case studies’ to scrutinise the emerging and intensifying dynamics about violence, conflicts, justice and struggles over natural resource utilisation and conservation. Rosaleen Duffy and Elizabeth Lunstrum have referred to the use of military and paramilitary tactics – actors, techniques, technologies and partnerships – in the pursuit of conservation as ‘militarised conservation’ and ‘green militarisation’ respectively. Though ‘militarised conservation’ is not new (it was practiced during the fortress conservation regimes in colonial and early postcolonial era), it is the intensification in terms of actors, techniques and technologies involved, its ill understood justifications (ethically and morally) and consequences towards justice that seem to capture interests of political ecology researchers (including myself). For instance, in his recent inaugural professorial lecture, Bram Büscher has called the intensification of violence, conflicts, securitisation and surveillance in natural resource utilisation as one of the 21st century ‘development and change’ problematics that need further scrutiny. There is also an upcoming panel, titled Conservation and/as unending war in sub-Saharan Africa of the Political ecologies of conflict, capitalism and contestation conference at Wageningen University. The panel intends to foster critical discussions for understanding the logics and dynamics behind the surging militarisation and war-making in the conservation frontiers of sub-Saharan Africa.

My interests on the topic are centred on questioning moral and ethical justifications (in connection to local forest justice) for using armed responses to counter illegal resource utilisation in defence of non-human species. Roderick Neumann’s article on moral and discursive geographies, and Rosaleen Duffy and colleagues’ recent back-to-back articles on the nuances of understanding the links between poverty, illegal wildlife hunting and intensified militarised conservation influence my thinking and the arguments I raise in this piece. The idea of shooting or even attempting to shoot a person in the defence of non-human species is seemingly absurd, especially when motivations that drive the person into illegal resource extraction are currently either ill understood or wrongly conceptualised. People may illegally extract forest resources as a response to increased demand for certain high-value timber from wealthy populations in the country and abroad; as a form of revenge against increased crop raids and livestock predation as a result of improved forest cover; as a mechanism to cope against restricted forest access (due to decentralised governance regimes) that precludes pre-existing income generating activities etc.

Here, I therefore conceptualise ‘militarised conservation’ as a paradoxical approach in three ways: first, the approach does not differentiate subsistence and commercial illegal resource utilisation i.e. it applies similar tactics when countering illegal resource extraction by individuals for subsistence and survival, and by well-organised groups for large-scale profit making. Secondly, the approach focuses attention only in tackling one end of the illegal resource extraction chain, ignoring the political economic contexts (at national and international levels) that drive illegal extraction at the local scale, thus creating furthering injustices. Lastly, advocates for ‘militarised conservation’ see the approach as justifiable in the defence of non-human species, but it does not allow ‘spaces of exception’ in cases where people responsible for forest protection under decentralised regimes fail – due to structural or relational reasons – to fulfil their responsibilities. I use my experience as a political ecology researcher in Tanzania to reflect on the three aforementioned ideas in connection with militarised conservation and justice.

I developed an interest in militarised conservation and justice implications during my fieldwork and research activities as a Masters student at the University of Dar es Salaam, Tanzania. I spent six weeks carrying out fieldwork (between April and May 2010) in three villages, studying the political ecology of a decentralised forestry scheme in northern Tanzania. I explored influences of power struggles and relations over forest costs and benefit sharing amongst participating actors in Nou Forest Reserve (NFR). Though it was not the initial focus of my research, I often heard discussions about surging armed illegal timber extraction. In several formal and informal discussions, villagers told me about how ‘clever’ illegal forest users had become as a result of using better weaponry than the local forest rangers possessed (sticks and machetes). The Joint Management Agreement (JMA) requires rangers to accompany the Village Natural Resource Committees (VNRCs) three times per month to undertake forest patrols and monitoring as part of the villagers’ responsibilities in the scheme. Failure to fulfil such responsibilities could put the scheme into an impasse without the villagers’ consent. Therefore, for the villagers to maintain their ‘distributive justice’ i.e. abilities to derive benefits (mostly through harvesting non-timber forest products, confiscating illegally harvested logs/timber and collecting fines from caught offenders) from the scheme, it was mandatory to perform forest protection duties effectively.

The lack of advanced weaponry to counter the armed illegal loggers’ tactics meant that participating villages were to be seen as irresponsible partners thus being axed from the joint forestry scheme. To avoid that and keep the flow of the benefits, the villages asked the Babati district police force to provide support in terms of personnel and equipment during forest patrols. With limited budgets, the police help did not last long as the villages lacked sustainable funds to cover fuel costs of the police vehicles and per diems of the patrol team members. Unfortunately, the police involvement led to a change of tactics by illegal loggers who started doing their activities at night. With just sticks and machetes and without heavy-duty night-time lightning equipment, the local patrol teams did not dare put themselves into a grave danger by carrying out night-time patrols. Thereafter, the patrols became very irregular as perceived security risks and lack of allowances discouraged local forest patrolling. This meant that the villages would potentially be cut off from the scheme, thus going back to a governance regime where the state (through the forestry department) would oversee forestry under commanding and policing means, which have historically produced long-lasting injustices to forest-dependent people.

Other parts of Tanzania are also experiencing this paradoxical militarised conservation, which has produced or enforced injustices. Cases of illegal logging syndicates made headlines in 2007 as top public officials were involved in illegal extraction in southern Tanzania and trade in high-value timber to China and India (where there is increased demand for such timber). Interestingly, in the crackdown that followed, it was the local people (involved as log cutters, timber makers and transporters) who bore the negative consequences, while powerful people behind the illegal logging avoided the consequences of forceful countermeasures.

In general, I suggest that the use of armed counter-response against illegal resource utilisation indicates a weakness, as illegal activities may contain the hidden message that people are not satisfied with existing governance regimes and the promises they offer. Or they find the regimes and promises inefficient, damaging, or simply irrelevant with regard to local contexts. Likewise, ‘militarised conservation’ reveals the widening gap between policy and practice, indicating how policies are not in harmony with realities on the ground. So policy proponents have to use greater force when the policies falter in the face of local realities. And this usually does not end well for locals, as recent cases in Pugu-Kazimzumbwi forest reserves show. Here, with an eviction order signed by the Prime Minister, a local conservation NGO financed the Tanzania Police Force to forcefully evict people who were classified as ‘forest encroachers’ by the forestry department and the NGO, but as legal occupiers by the Ministry of Land. Most of the evicted people were farmers and pastoralists who occupied the forestland for subsistence (and a small percentage through charcoal production). This happened at a time when economically and politically powerful individuals in Dar es Salaam were hiring some of the evicted people as their servants in the lucrative charcoal making business. As always, it was local people who faced the consequences of the police force as policemen confiscated their property such as bicycles, harassed them and handed unfair judicial treatments to the ‘local offenders’.

With this piece, I raise two related arguments. Firstly, unless the driving forces for people to engage in illegal resource extraction are well understood and conceptualised within academic and policy spheres, militarised conservation or green militarisation will remain a paradoxical approach. One of the possible ways to enhance our understanding and conceptualisation is by looking at the motivations from a political economy lens; and policy makers must use these analyses in policy development. In a country such as Tanzania where GDP growth has been at 7% over the past ten years, but poverty is still widespread, illegal resource extraction (especially by those doing it for subsistence) may be conceptualised as an outcome of distributive injustice as a result of unequally distributed national wealth and other related political economic processes. It is such situations where natural resources-dependent people entangled in the broad and complex political-economic processes that leave them without ‘rational’ options, may be involved in illegal resource utilisations.

Therefore, as long as ‘militarised conservation’ does not acknowledge how and why people are motivated to engage in illegal resource extraction, it will be remain an approach that may further injustice. In such times of crisis (as illegal extraction surges due to local ‘military’ incapacities), normal law and regulations about forest protection responsibilities and consequences of failing to fulfil them should not hold, as enforcing them will only increase injustice. ‘Militarising’ local forest rangers can only escalate conflicts between local rangers and illegal resource users, which will raise further questions about moral and ethical justifications of any killing of humans in defence of nature, and even local forest justice. I argue therefore that it is necessary to have such ‘spaces of exception’ as better temporary solutions while working to redress the political economic processes that motivate people to engage in illegal resource utilisation, thereby reducing injustice and creating long-term equitable solutions.

Duffy R, FAV St John, B Büscher & D Brockington. 2015. Toward a new understanding of the links between poverty and illegal hunting. Conservation Biology.

Neumann R. 2004. Moral and discursive geographies in the war for biodiversity in Africa. Political Geography 23: 813–837.

Mathew Bukhi Mabele is a doctoral student at the Department of Geography, University of Zurich, Switzerland, mathewbukhi.mabele@geo.uzh.ch.