Coexisting with biodiversity in the city 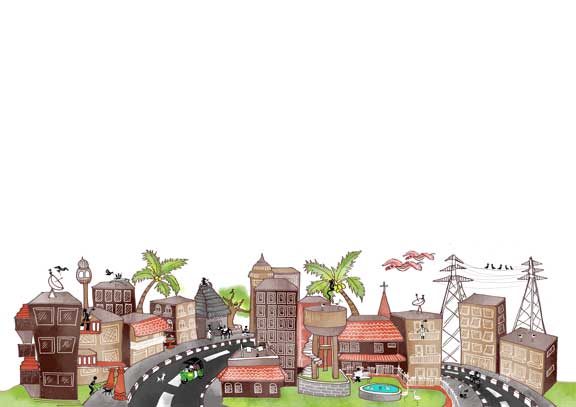 A blank map of the world fills the screen as 200 students look up at it in a darkened classroom in California. The blankness represent an early time in human history when there weren’t so many of us around. It is an animated map designed to illustrate the growth of the human population across the globe. As the animation moves forward in time, a few dots appear in some parts of the world, and start filling up the blank spaces. Each dot represents a significant center of human habitation, a town or city holding a large number of people. The dark dots start appearing at a faster rate as we get into recorded history, with the pace slackening only in the Americas in the decades immediately after the Old World “discovered” the “New” one. Over the last couple of centuries, the pace really picks up, even in the New World, at our post-industrial exponential rate illustrating how Paul Ehrlich’s (and Thomas Malthus’ before him) population bomb started really going off all over the Earth during the 20th century.

Alongside this map is a graph showing the rate at which species have been going extinct on Earth over the same time period as the map’s animation. At least, our best estimate of how many species have gone extinct. There is a familiar yet disquieting cadence to this dance as the line on the graph sweeps and bounces upwards to keep pace with the rhythm of the dark dots pattering across the map. The lesson couldn’t be made more obvious: as people have increased in number, so have we been pushing ever more and more species off the cliff of extinction. It is the biggest cautionary tale of this Anthropocene, one that every young student must surely absorb deeply if we are to hope that the human juggernaut can be turned around and many non-human lives saved.

Yet, as the young mixture of blank and anxious faces stares at the screen, and up at the professor hammering in the point about how the human population explosion is a leading cause of species extinctions, I can’t help but notice something different. The students have naturally focused their attention mostly on the Americas and on Africa, large land masses with which they are familiar as home, for themselves or for wild animals. These are also places where the recent population growth and extinctions are most prominent, making them more animated on screen.

Over on the Indian subcontinent, though, the dots dance to a different rhythm. This corner of Asia seems to get filled by people quite early in our history, and remains relatively more filled than most other places throughout subsequent millennia. Yet, it is not a region that has seen spectacular extinctions quite like those elsewhere. Yes, we’ve lost the Cheetah, and many other species hover at the brink, but compared to much less populated North America, the Indian subcontinent has managed to retain quite a number of even large fierce species. How has it been possible for a land so full of people as to inspire Ehrlich to write “The Population Bomb” four decades ago, to also hang on to so many wild animals crowded into this tiny corner of the world?

A recent global collaboration (in which I play a part) compiles a database of biodiversity (starting with plants and birds) in the world’s cities. As the database starts filling up with lists of plant and bird species now known to be regularly occurring in 147 (and counting) cities, a number of interesting patterns emerge, fueling further research on urban biodiversity on a global scale. As I have noted in this column before, studying biodiversity in cities and understanding how species find ways to survive and sometimes thrive in the interstices of human habitats is key to how we navigate our way out of the current Anthropocene extinction crisis.

One in five of the world’s bird species (and one in twenty of the plants) now occur in urban areas. More interestingly, over 95% of the bird species found in cities are native to the region. In other words, bird diversity in any city continues to reflect its region’s unique natural history heritage, even as cities seem more alike in this globalising world culture of shopping malls and airports, high-rise apartments and office buildings. Cities may be simpler (compared to a rainforest) or more complex (compared to a grassland) than the natural ecosystems they displace. Yet, the niches in these novel ecosystems are filled mostly by species who evolved in those displaced native habitats. Not really by design or intention, the cities we have built for ourselves somehow serve as arks for more native biodiversity than we imagine. We need to imagine better, and to improve how we design cities so even more species may find ways to cohabit with us on this urban planet.

Yet again the picture from cities in India fuels my unreasonable and skeptical optimism. For here in this land of over a billion people, a land which has always been more heavily peopled than almost anywhere else on earth, even the largest megacities contain over 300 bird species. And hardly any of them are exotic invaders who managed to gain a foothold and usurp habitat from native species. This is in part because the world’s most widespread city-slicker species (the house sparrow, the rock pigeon) figured out how to live with humans early in these parts, and along with the mynahs and parakeets, managed to invade other urban areas while retaining their hold on their native cities in India. The same may hold for primates and some other mammals. But maybe not for plants where people brought in some pretty exotic species which ended up escaping from their gardens to become the most notorious ineradicable outlaws choking the jungles and grasslands across the subcontinent.

Is it India’s mainstream culture of revering nature and finding gods in various animals which allowed so many of them to live among humans? Is it more simply that the early onset of urbanisation in the the Indus valley, in Harappa and Mohenjo-daro, has allowed more time for the native birds (and other wildlife) to adapt to city life? Or is it that the collapse of those once rich cities into deserts burned some ecological lessons into unconscious cultural memory, allowing subsequent development to hang on to bits of wildlife and nature amid human enterprise?

Wherever the answer may lie, we better find it soon. Because it has the potential to help not only India, but cities everywhere in conserving more of the world’s wild species even as more humans turn to city life. Even now, even in anarchically sprawling megacities like Mumbai, something remarkable happens: mangroves come back in Thane creek, paradoxically protected by the newly urbanised populace of Navi Mumbai. And every winter a sprinkling of pink brightens the grey of the tide flats and the dark green of the mangrove canopy, when lesser flamingos by their tens of thousands show up to add color to urban life. We don’t quite know what brings the flamingos into the city, nor why mangroves grow back along the shores of Navi Mumbai’s new suburbs even as developers continue to cut them down elsewhere in the metropolis.

Perhaps it is part of that different rhythm to the dance of the urban human dots on that map in that California classroom. Somehow, both Indian culture and biodiversity have remained surprisingly resilient even as humanity transformed the entire planet. The real challenge ahead will be to not throw that cultural and natural historic legacy away, but to show the rest of the world how human development can be reconciled with conserving other species.