Emerging Disease at the Human-Animal Interface 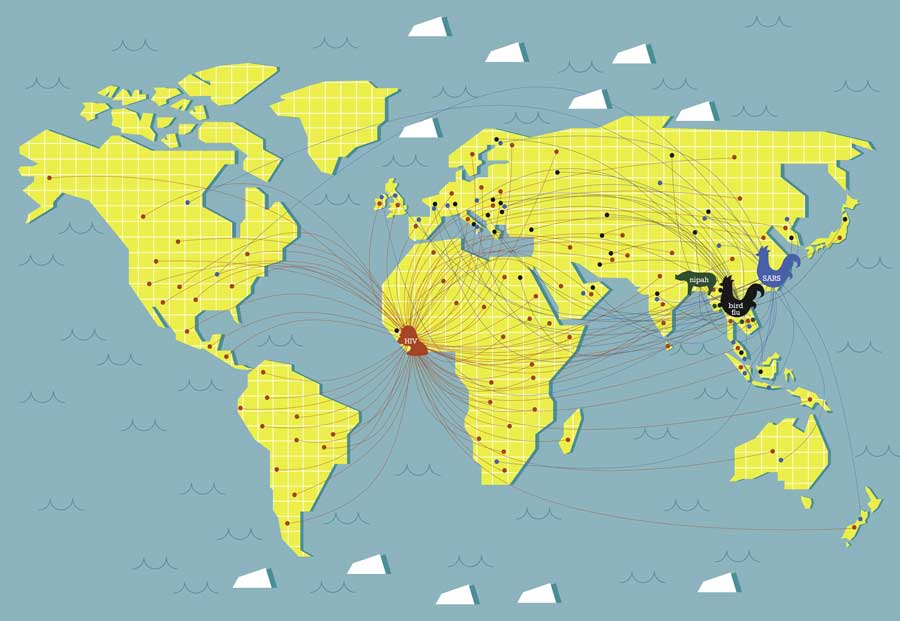 More than 60 percent of infectious diseases that affect humans are caused by pathogens that we share with wild and domestic animals. Such diseases, known as “zoonoses,” are transmitted from other vertebrate animals to humans in a process known as “spillover,” and pose a significant threat to human health. Spillover is more common in developing countries, which experience rapid environmental change as their human populations grow. Some zoonoses, such as rabies and anthrax, occur only when there is transmission directly from animals to humans. However, there is the potential for a shift from animal-to-human to human-to-human disease transmission. The result may be a localised outbreak of disease, such as the periodic emergences of Ebola virus in Zaire/ Democratic Republic of the Congo, or a global spread of epidemic proportions such as the recent outbreak of Severe Acute Respiratory Syndrome (SARS).

In order to better anticipate, contain, and even prevent such outbreaks, it is first necessary to improve our understanding of the basic epidemiology of zoonoses, including the factors that cause new diseases to emerge, and those that cause re-emergence of known diseases. The first step in this process is considering the anthropogenic activities that have been linked with the dramatic increase in incidence and frequency of zoonoses over the past 30 years.

Pathogens are more likely to occur in populations above a certain density; below this “threshold density,” pathogens cannot survive. Before the Second World War, most human settlements in tropical developing countries were scattered, with few large cities. This pattern has changed over the past decades: areas that previously consisted of scattered settlements are now occupied by large mega-cities surrounded by semi-urban settings, with only small areas of undisturbed forest area remaining near croplands and degraded lands. In 2006, there were 18 mega-cities in the world, cumulatively containing more than 10 million inhabitants. By 2025, Asia alone is predicted to have 10 mega-cities; by 2030, these areas may be home to as many as 2 billion people. Both the size and high density of human populations and their associated domestic animals increases the risk of new disease emergence. These conditions also allow rapidly reproducing pathogens more chances to undergo mutation and develop new traits that will promote survival and infectiousness. Even if there are no immediate outbreaks or emergences of new diseases, pathogens will adapt to conditions within the infected host. Later, under favorable circumstances such as a weakened host immune system, the resident microbes can cause an infection.

Land use and environmental changes

Another consequence of human population growth is an increase in deforestation, the conversion of forested land to non-forested areas such as cropland, plantation and urban habitats. This allows humans to settle in formerly isolated areas rich in previously unknown pathogens. This is probably what led to the spread of human immunodeficiency virus (HIV), which originated as simian immunodeficiency virus (SIV) in chimpanzees.

Deforestation is frequently associated with forest fragmentation, which reduces the number of predators that can occupy the habitat. Without predators to control their population, rodents and biting insects thrive; because these animals can act as reservoirs for human disease, their increase allows zoonoses to flourish. As the movement of humans and wildlife species between remnant forest and human habitation increases, pathogenhost interactions also increase and result in the spread of infections.

Anthropogenic changes to the global biosphere include shifts in land and water use, biodiversity loss, and introduction of new chemicals. These processes alter environmental factors such as temperature, humidity levels, and water availability. Disease vectors such as ticks and mosquitoes, which carry disease from one organism to another, are sensitive to such changes in the environment. The resultant fluctuations in vector population can facilitate the emergence of vector-borne zoonoses such as West Nile virus.

Climate change, a phenomenon associated with global biosphere change, is likely to increase populations of vector-borne pathogens in cold regions, which are expected to become warmer. At the same time, it may decrease the transmission of infections in areas that become so warm that vectors are no longer able to survive in high numbers. Climate change is also predicted to change patterns of human activity. For example, continued warming of the Earth’s surface temperature could reduce the quality of pasture lands, causing a decline in livestock numbers and human-animal interactions.

This changing context presents many uncertainties. For example, droughts may decrease mosquito populations and, therefore, the incidence of mosquito-borne diseases; at the same time, the accumulation of dead vegetation might act as a reservoir for other pathogens. The effect of climate change on the spread of zoonotic disease is likely to vary according to geographic location and local habitat.

Recent advances in the way food is produced, processed, and preserved can also play a role in the emergence of zoo-notic disease. One especially influential practice is the use of antimicrobial feeds and drugs. The latter are particularly to blame for an increase in the number of antimicrobial-resistant pathogens that can be transmitted from animals to humans through the food chain. In human Salmonella isolates collected in the United States, for example, resistance to antimicrobial agents rose from 0.4% to 1.0% between 1996 and 2001.

Among animals reared for agricultural purposes, repeated breeding of genetically similar stocks leads to weakened immune systems that leave animals less resistant to infections that may then be transmitted to humans. Further, these animals are often housed and transported in crowded conditions that increase the chances of exposure to, and transmission of, infections.

Another risk factor for cross-species spread of infection is subsistence hunting. The bush-meat trade–the tracking, capture and butchering of animals in the wild, and transportation of meat— brings humans dangerously close to potential vectors and the microbes they carry. Risk of infection is especially high during interactions with non-human primates such as chimpanzees; these close relatives of humans may transmit pathogens such as Ebola virus. The amount of annual wild meat consumption has been calculated to be around one billion kilograms for central African countries alone. In Cameroon, Central, and West Africa, bush-meat hunters and other persons who handle vertebrate pets are at a higher risk of zoonotic transmissions as a result of bites, cuts and exposure to the bodily fluids and tissues of infected animals. Bush-meat hunters are commonly infected by simian foamy virus; luckily, human-to-human transmission of this pathogen has not yet been established.

Zoonoses are most likely to emerge where humans come into close contact with animals. Such encounters are most likely in tropical regions, which are characterised by increasing human population densities and rapid urbanisation. Because of the high number of low-income individuals in these countries, a significant proportion of the population is faced with poor sanitation, substandard housing, inadequate disease control and management, and rapid urbanisation. Globally, over 600 million people are dependent on livestock for their income, and up to 70% of these people live in marginalised developing regions. Two-thirds of the workforce in sub-Saharan Africa and South Asia is involved in agriculture; livestock are vital as a source of both income and food. Unfortunately, they may also be a source of pathogens and, to compound the problem, there are few incentives for farm-level management and control of infections.

Once infected, people in this socioeconomic group often lack access to proper medical care. Health centers are few and far between, and potential patients lack the time and money needed to visit them often. As a result, most zoonotic infections are chronically under-diagnosed.The burden of looking after a seriously ill family member may push the household further into poverty and illness.

Another major challenge associated with disease management in developing countries is the lack sufficient information to make decisions, both at an individual and a national level. In India, for example, around 68% of the national workforce depends on farming, yet most people are unable to tell whether they are working with infected or healthy animals. Because of ineffective data collection and poor disease management practices, there are no data on death rates associated with zoonotic infections across the country. Further, there seems to be a reluctance to recognise that the study and management of zoonoses requires the combined efforts of medical and veterinary professionals, who have, historically, worked in isolation from each other. The transmission of swine flu across the country can be used as an example: Even though many control measures were taken to prevent infections among humans, few or no measures were taken at the veterinary level to prevent infections among livestock. This lack of coordination and information is only exacerbated by widespread illiteracy, poverty and unsafe living conditions.

Learning from the ‘Nipah outbreak’ in Bangladesh

The emergence of new infections and the reemergence of known infectious diseases are both major global concerns, particularly in developing countries that lack adequate medical surveillance, disease management practices, and financial resources. Successful management of zoonoses requires collaborations between experts at the local, national, and global levels, as currently being demonstrated in Bangladesh in association with the emergence of the Nipah virus.

Nipah infections in Bangladesh are very different to the first emergence of this zoonosis in pig farms in Malaysia in 1998, when pigs were exposed to flying fox urine, faeces or saliva carrying Nipah virus. The disease quickly spread to humans throughout Malaysia and Singapore as infected pigs were transported to slaughterhouses. Since 2001, periodic outbreaks of Nipah virus, with approximately 200 human fatalities, have been reported from Bangladesh and northern regions of India; however, these occurrences of zoontoc disease resulted from increased habitat loss which placed humans in closer contact with flying foxes. In Bangladesh, the infections coincide with the date palm sap harvesting season from November to March because the most common transmission pathway for Nipah virus is human consumption of sap contaminated with flying fox saliva and urine.

Date palm sap is collected through a tap or funnel that drains into a clay pot, often left in place overnight and frequently visited by flying foxes that enjoy the sugar-rich sap.The harvester, their families and friends drink the raw sap the next morning. Shields to keep fruit bats away from the sap collection pots are known to local harvesters, but rarely used until scientists from United States Centers for Disease Control and Prevention, and International Centre for Diarrhoeal Disease Research, Bangladesh, determined that homemade skirts covering the sap-producing surface and mouth of the collecting pot prevented most flying fox and bats from contaminating the sap. Community intervention trials are underway to determine if changes in sap harvesting practices can reduce local spillover of Nipah virus from flying foxes to humans, minimising the human-to-human transmission which may occur during the care for an infected patient.

Prediction and prevention of the future zoonotic disease

As human populations grow, and our interactions with the environment change, there is a greater likelihood of emerging disease at the human-animal interface. However, greater awareness and collaboration among doctors, veterinarians, wildlife carers, biologists and communities can identify potential diseases at the source, before there is the potential for diseases to be carried to other regions and have a greater impact on human health and economies.

As shown by the case of Nipah virus in Bangladesh, minimising the risk of zoonoses is best accomplished with the involvement of local people. Global co-operation to support monitoring programs in tropical developing countries, hotspots for disease emergence, and new molecular methods of identification will help to quickly isolate potential new pathogens. Advanced communications technology allows outbreaks to be reported quickly so susceptible communities can be informed of transmission pathways and prevention strategies. Our best weapons against future zoonoses are understanding the origin and dynamics of pathogens in wildlife, reacting quickly to spillover events so that the disease has limited time to be transmitted among the human populations.

Aswathy Vijayakumar is a recent graduate (BSc) and current Teaching Assistant at Asian University for Women, Bangladesh, and hopes to enter a graduate program in molecular biology in the near future, aswathy.v@auw.edu.bd.

Andrea D Phillott, an Associate Professor in Biological Sciences at Asian University for Women, studies zoonoses and disease transmission at the human-animal interface in Australia and Bangladesh, andrea.phillott@auw.edu.bd.