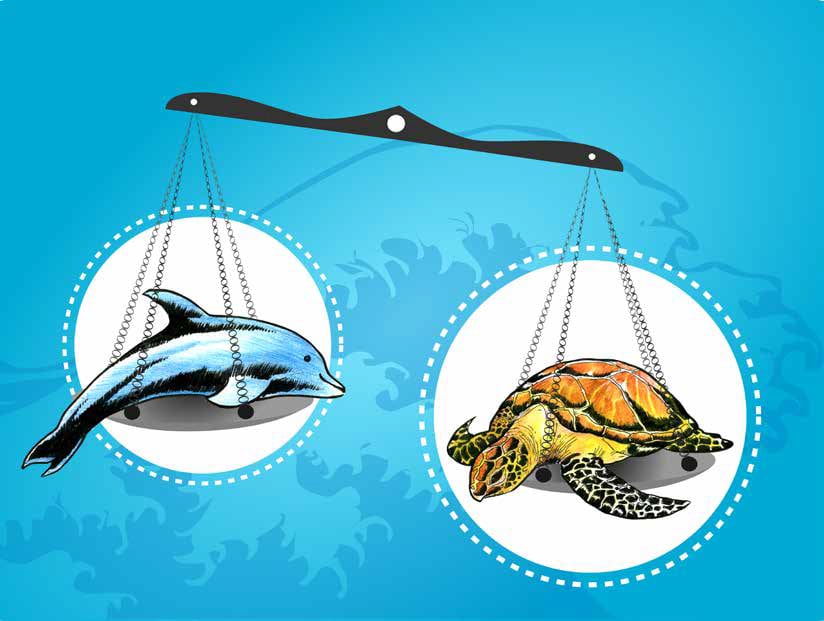 Conservation biology is routinely built on fears and portents, proclamations of one disaster after another. This species is on the brink of extinction; that habitat has been destroyed; such-and-such environment is in crisis… Prospects like these, routinely derived from biological and ecological studies, are indeed frightening; such forewarnings warrant careful attention and diligent action.

Yet conservationists are accused of promulgating a gross overabundance of bad news, often resorting to scare tactics and doomsday predictions to garner attention and raise support for their activities. There is nothing new about this strategy: environmental disasters have been predicted from the time of Genghis Khan and the Ancient Greeks.

But the trend of procuring attention and financial support by proclaiming disaster has often resulted in a jaundiced public; as we know from the children’s story, crying “wolf” can have dire consequences—not on the wolf but on the person who cries its name in vain. Besides, who wants to support a gloomy enterprise that careens from one catastrophe to another? Not surprisingly, conservationists have identified the pressing need to show success and move away from the constant environmental obituaries.

A more balanced approach is long overdue, and in recent years it has become ever more common to recount success stories. Surely we need more manifestations of success, for after all success in solving complex environmental problems is presumably the object of engaging in the great conservation enterprise in the first place. Clearly, there are some excellent success stories from many projects and diverse lands. Yet as this alternate strategy becomes more fashionable the conservation industry is in danger of drifting back into the same swamp as before, only from a different path. Many conservationists now swing to the other extreme—playing up any little improvement as virtually world-saving. Just as there have been countless hoary predictions of environmental calamities, we are now facing a blitz of success stories and with each one the respective bard expects to be rewarded.

But what constitutes an authentic success story? Who defines “success”? The dictionary tells us that “success” is primarily about fame and fortune: is that what conservation success stories are about?

Take marine turtles: there are few turtle conservationists who would question that more turtles signify more success. But if conservation really is based on robust biological and ecological information, then one needs to look more closely at what exactly “more turtles” means. If these are critically endangered hawksbill turtles, then population recovery and more of them is certainly the desired condition. On the other hand, if the more numerous turtles are, say, olive ridley turtles, then their increased numbers may not necessarily be universally appreciated. If you happen to be struggling to rehabilitate badly decimated populations of critically endangered leatherback turtles and the olive ridleys are competing with them for food, nesting areas or other limited resources, the success of the olive ridleys would be a threat to the leatherbacks.

The point is, not all marine turtles are created equal and measures of success need to be gauged by bearing in mind characteristics and situations of different species—information that is often out of reach.

Alternately, consider that a dolphin is severely threatened by incidental capture in certain fishing operations, and there are, unfortunately, many species of dolphins that are in this situation. At the same time, incidental capture and mortality is also a major threat to most marine turtle species. Consequently, there have been diverse attempts to reduce or mitigate incidental capture of marine wildlife. Some of these methods work better for turtles than for dolphins. So more turtles would indicate success in dealing with incidental capture of the reptiles—but if this came at the cost of more dolphin captures, then many people would question if it really is “success” when one endangered species bears the brunt of another species’ triumph. In fact, this dilemma has occurred repeatedly, often with specialists of one group of animals focused on protecting “their critters”, but oblivious of the consequences of their conservation actions on other endangered species.

So, not all endangered species are created equal.

Another critical consideration is what happens to the environments where the species of conservation concern live. For example, when a depleted population of green turtles increases, consequently there will be more turtles grazing more often, looking for more food; the marine pastures on which they depend will be under increased grazing pressure. This will have important consequences on the plants and animals that live in the marine pastures: some of them will be under increased pressure because the green turtle population is recovering. Indeed, an entire marine pasture ecosystem could be negatively impacted if grazing pressure by threatened green turtles increases too much. While it may be a blasphemous question to some turtle conservationists, could it be that too many threatened green turtles in an ecosystem would actually be endangering to the ecosystem?

But these deliberations are simple when compared to others that consider the impact of one other species: Homo sapiens. Even if it there were consensuses that a conservation action was valuable for an endangered turtle species and it did not cause any problems for other turtles or any other endangered species or ecosystems where the turtles live, we have not necessarily reached a universally acceptable state of “success”. More turtles might be celebrated by all conservationists (turtlely ones and dolphiny ones), but the situation could still cause distress or annoyance to other people. For example, fishermen are often bothered by turtles getting into their nets, reducing their catch and destroying their gear. In the case of trawlers, the turtles can crush valuable catch and increase drag, lowering efficiency and profitability of the operation. For longlines, with thousands of baited hooks, a few turtles can cause havoc, not only eating the bait and leaving the hooks bare and useless but tangling up and knotting the lines to create terrible messes that take tremendous time and effort to put right: all this denies the fishermen of the ability to fish. Nesting turtles that wander around on beaches at night, knocking over and destroying beach furniture are not welcome for some hoteliers. More turtles grazing on a marine pasture could mean less fish available to the fishermen. And so on…

The point is: not everyone is madly in love with turtles, no matter how endangered they may be or how politically correct it is to show concern for them. For some people the chelonians present clear problems and threats to their livelihood. From their point of view, more turtles mean more problems, less ability to meet their own needs. Although conservationists are adept at arguing their case, providing alluring pictures and marketing cuddly plush animals, in fact, there are far, far more fishermen than conservationists in the world. So, what may be “success” for a few could actually be failure for many.

And we have only considered well-known and innocuous turtles. These reptiles have numerous attractive features, they are central to many cultures the world over and there is no great challenge to get people to identify with these curious animals that live inside a box. In the conservationists’ lexicon, these are “flagship” species, relatively easy to attract attention and interest.

What if instead the conservationists’ attention were focused on some other endangered species, say some critter that is barely known to biologists, much less to the lay public, something that has no clear redeeming qualities and is not attractive but rather is generally disgusting to people. Would most members of society really agree that more of the “what-do-you-call-them” is success?

Or take some very well-known endangered animals. Does everyone whole heartedly agree that more wolves, more bears, more panthers, more tigers, more elephants is unequivocally a success? If your crops were destroyed, your livestock carried away, your child mauled or your own life threatened by one of these endangered animals, would you want more of them?

Without a doubt, we need more success stories. But just like the fashion of effortlessly stamping some living thing with “brink of extinction” or some landscape with “environmental disaster”, conservationists need to be very careful about painting a situation a glowing colour of success. Employing either of these strategies to draw attention and raise support could be counter-productive, not to mention dangerous, if conducted without consideration of the complex ecological, sociological, and political context in which the protected species exists.

It is said that “beauty is in the eyes of the beholder”: the vision of success is no less subjective. Truly successful success stories must have many and diverse eyes beholding them.