A Bold Tusker’s Tale of Timidness

Pre-monsoon showers at the start of May, drenching the charred ground, filled the entire forest with the aroma of wet mud and brought a huge sigh of relief from the thirsty wild animals. This beautiful forest was changing her clad from grey to green. The sight of blooming lush green grasses could captivate any onlooker.  The beauty and the fragrance in the forests were aided by the orchestral sounds from rutting gaurs, alarm calls of spotted deer, mating pea-fowls, and chirping birds. It seemed to me that the entire forest was rejoicing the upcoming festival of ‘monsoon’.

I was on our regular routine of monitoring elephants in the jungles of southern India. Since the first shower in the forest, we tried our luck to locate our identified herds. Given that water was plentiful in all the waterholes and streams, elephant herds were not travelling across the forest, making them difficult to sight.  I decided to position myself near a source of perennial water, hoping that elephants would visit either in the noon or the late evening.

Everything in the forest had been revamped as was this waterhole which got its water from the check-dam at one end and spread its charm engulfing and drenching the bed of small and tall grasses. Thus grabbing the attention of elephants, who came to drink and then munch some grasses. As I was busy in my thoughts, observing the ripples in the pool, at around 4 pm, I saw a herd marching towards the waterhole. I got alerted and counted the members. Initially, there were five of them;  an aged female, a young female with a very small calf and two juvenile tuskers who were about five years old. This herd was followed by another 15 elephants who came to the waterhole in three groups. Now, there were 20 elephants altogether! They walked with utmost caution and with supreme elegance, interacting with each other by sniffing, touching their mouths, temporal and genital regions with their trunks, to identify each other or exchange greetings! 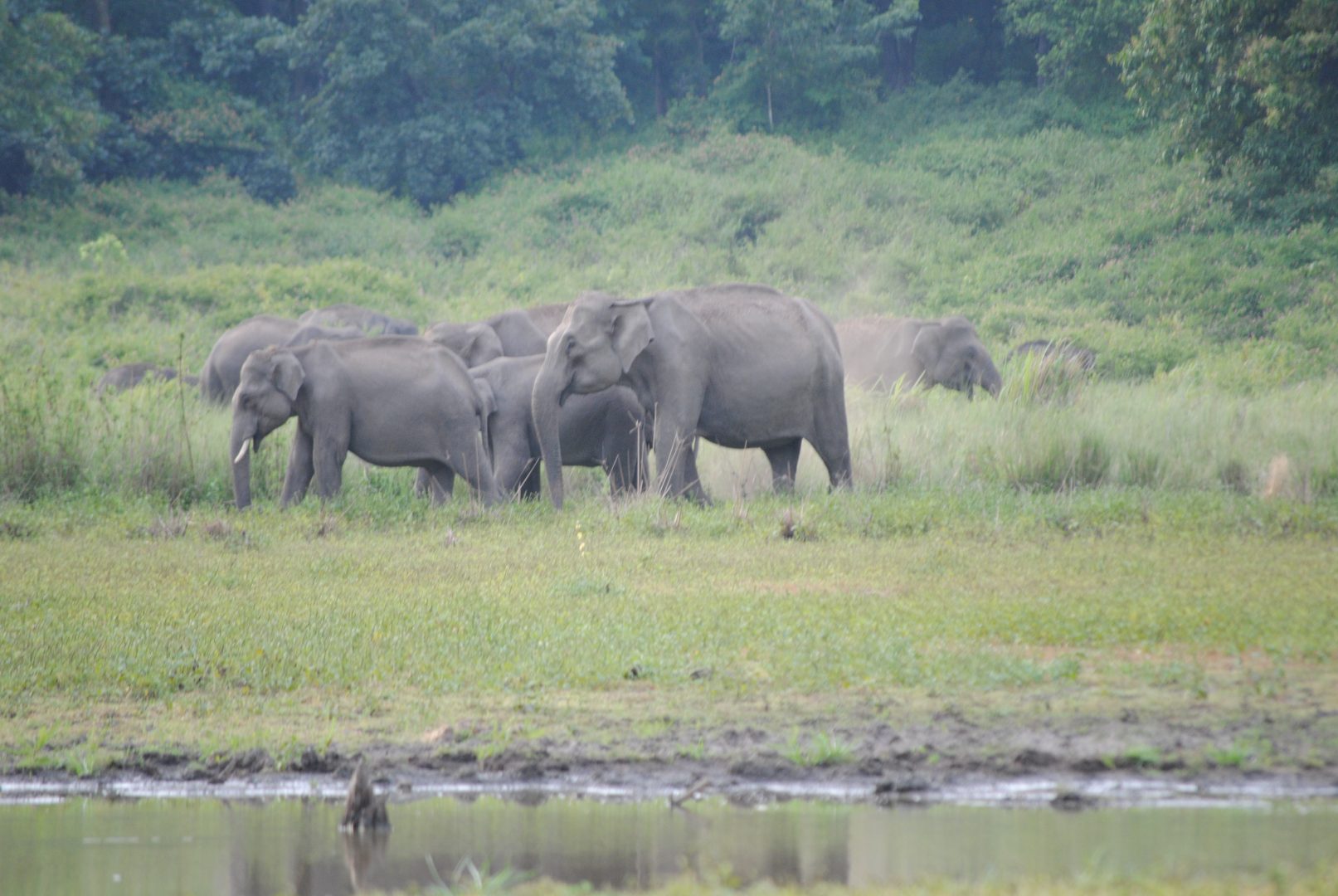 Amazingly, the elephants, after their tactile communications, coordinated well and entered the waterhole in batches.  After spending some quality time in the water, groups started adorning themselves with their own natural cream of mud. All of them glittered brilliantly. 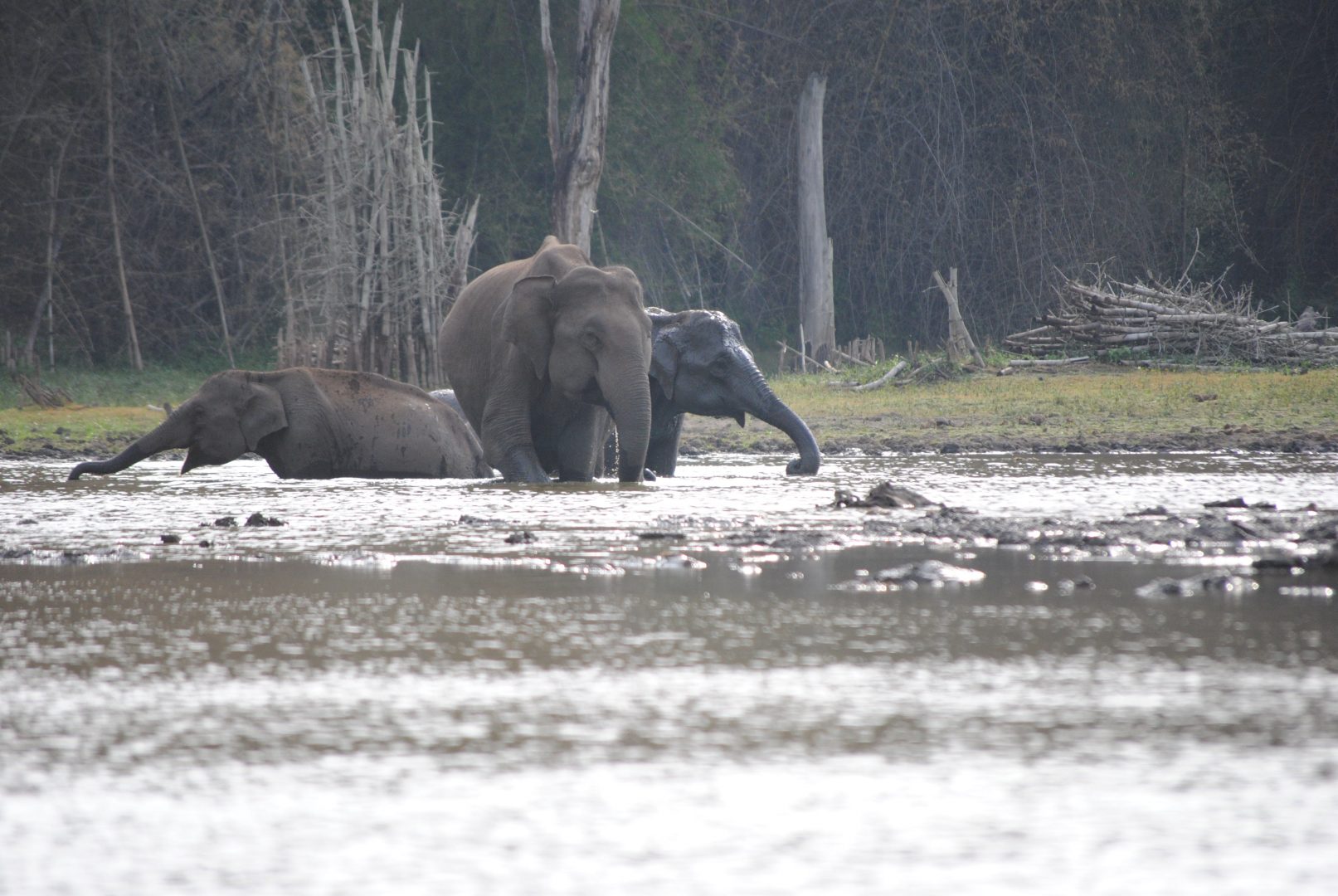 The herds started grazing. All was calm and quiet. Juvenile tuskers were playing and sparring with each other. Calves followed their mothers, imitating them by plucking a single blade of grass, often failing in doing so. Sub-adult females not only grazed but were also vigilant. 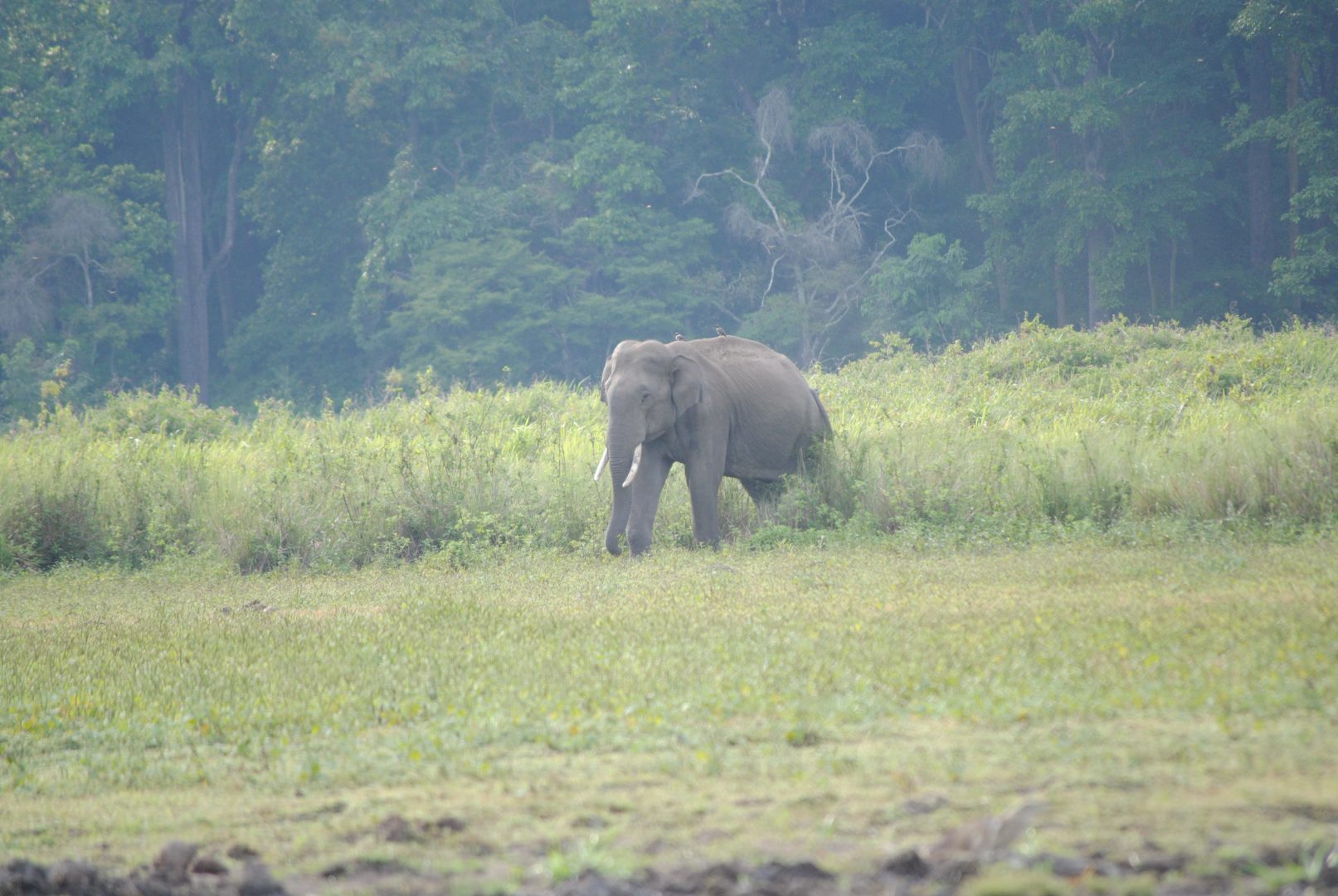 Engrossed in observing them, I did not realize that it was already nearly 5 pm. Traversing the tall grasses, a 15-year-old sub-adult tusker (I named him ‘Krishna’) entered the scene. With his distinct short and parallel shinning tusks, I could see that he was at the onset of ‘musth’ (a sexually active state in male elephants). It could have been Krishna’s first experience of being in the musth! He headed straight to the grazing females, sniffing their reproductive signals, perhaps searching for the best partner! 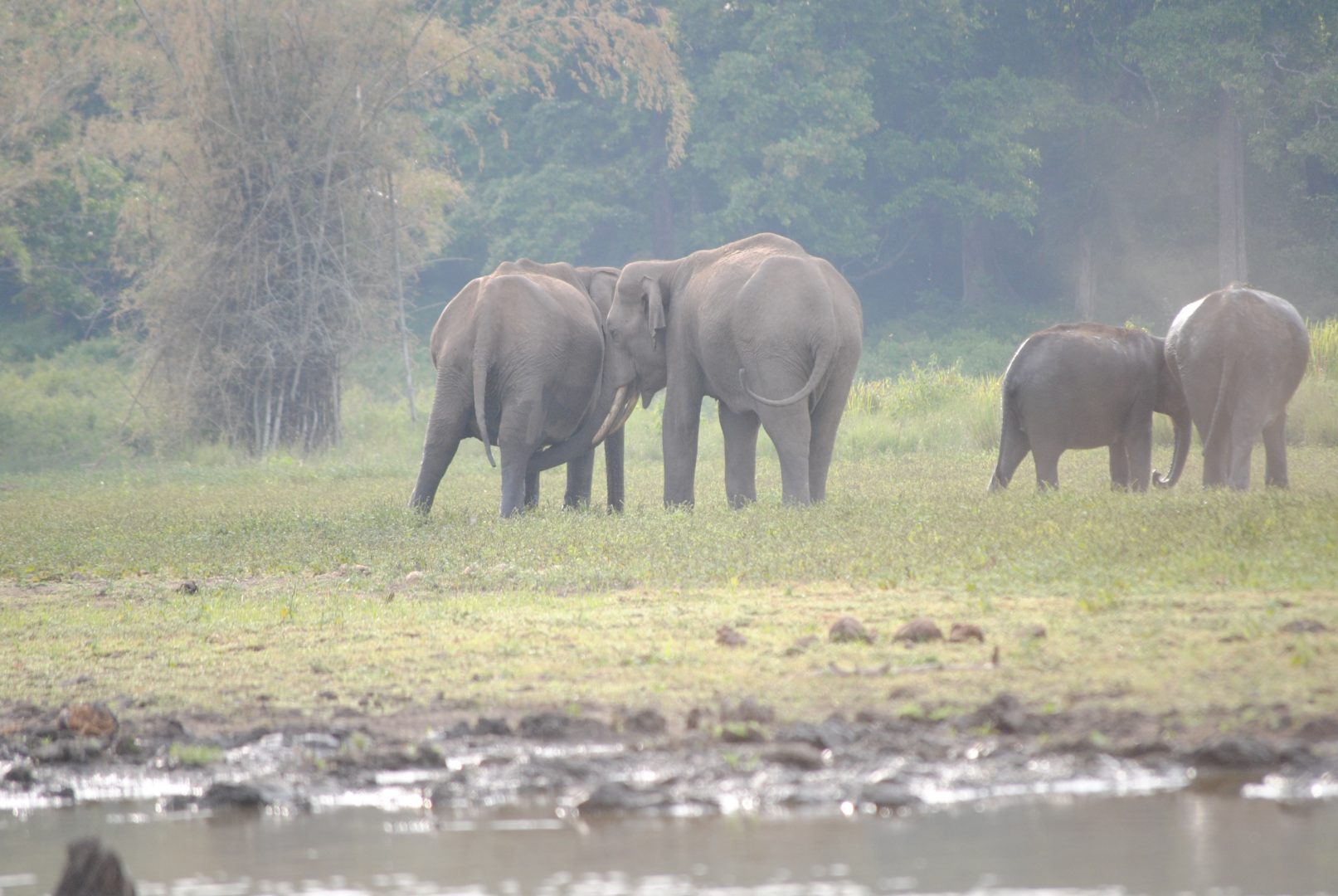 After a bit of sniffing and examining the females, Krishna seemed to lose interest in his mate-searching activity, and turned towards the juvenile tuskers. Upon seeing him approaching, the juvenile tuskers were reluctant to face him.  Surprisingly, he had other ideas in mind. He held the tail of a juvenile tusker with his trunk and pulled the youngster towards him, while another juvenile stood stunned. 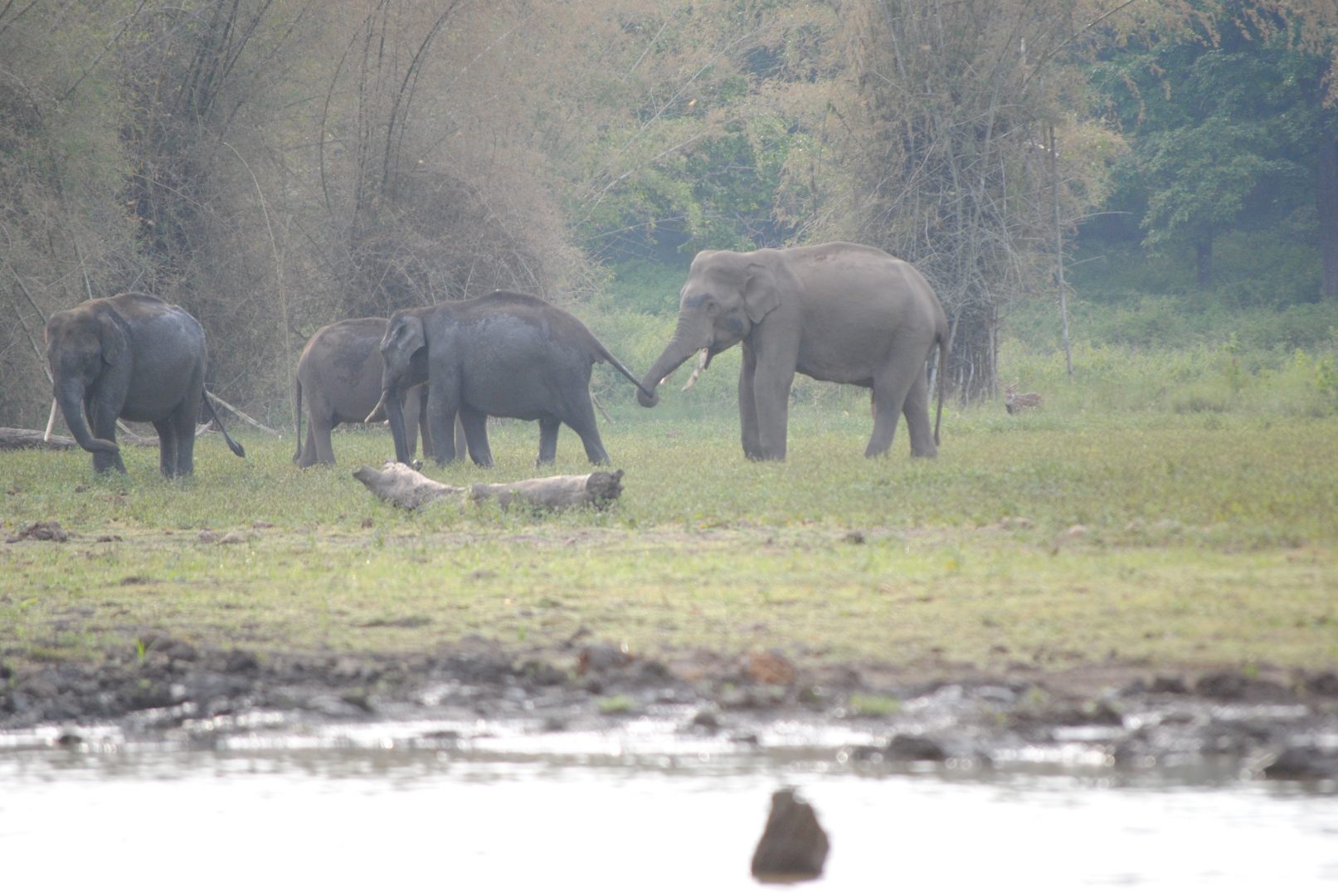 He did not stop his unwelcome brawl. He wanted to take young tuskers on. He started poking the rear of the juvenile with his short tusks to initiate a fight. He locked his tusks with a young one, and by lifting head, pushed the young one back on and on. As the young tusker retreated, he pressed the hind legs of the youngster to the ground, forcing him to ‘cry’ for help! 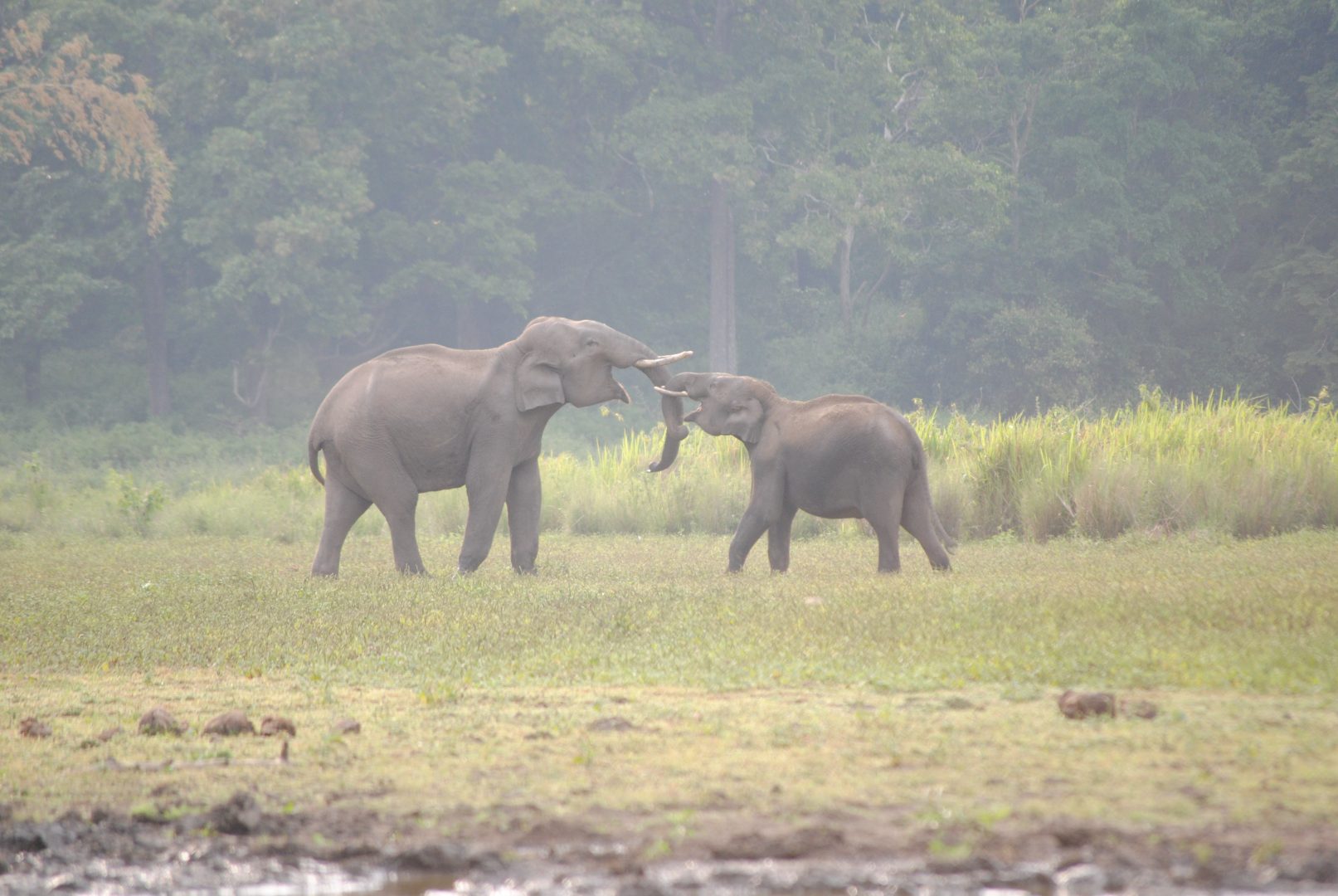 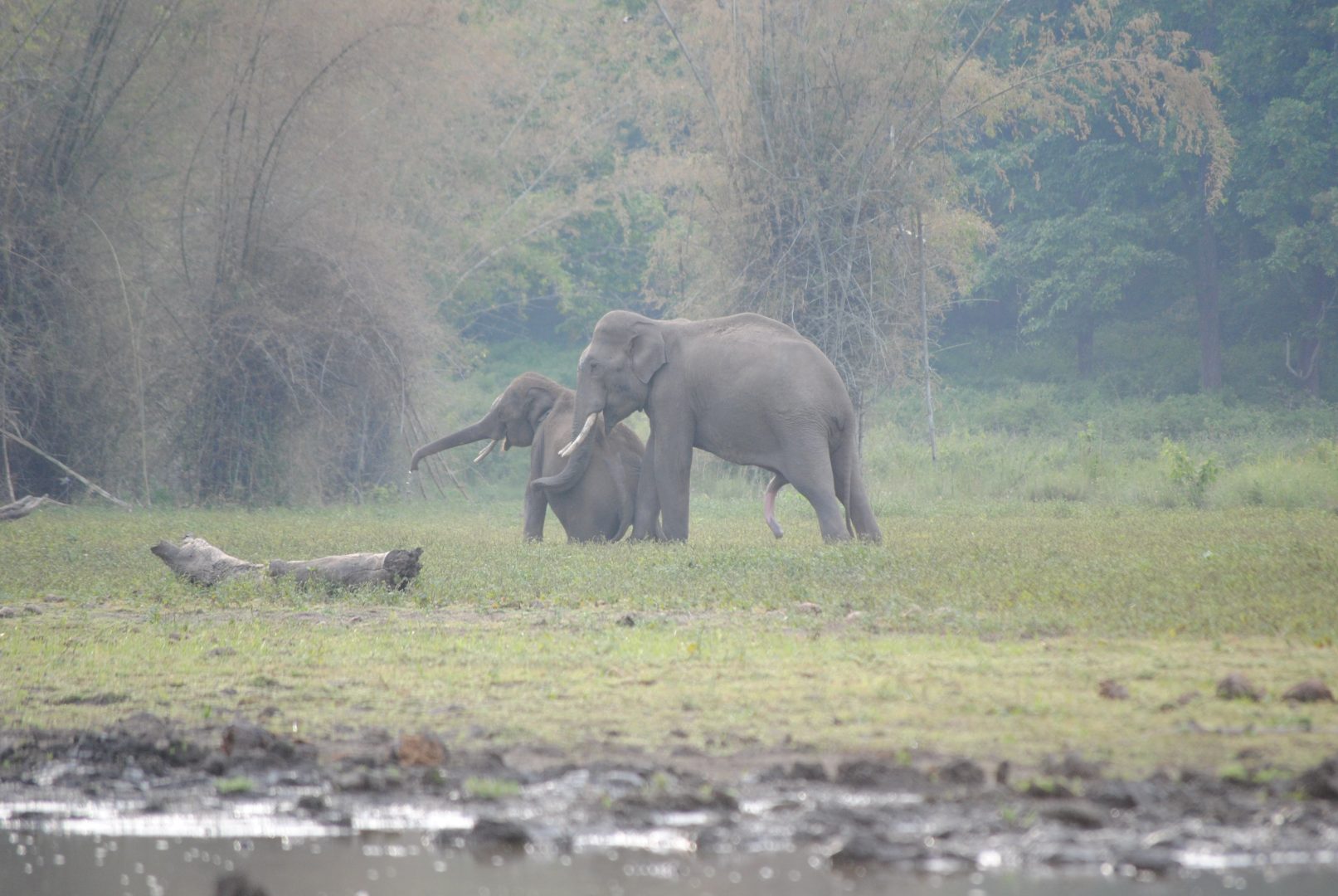 After winning his self-initiated wrestling and establishing his hierarchy among the young tuskers, he then marched valiantly towards the waterhole. As Krishna approached, he sensed a slight movement and ripples on the pool. He became cautious. I too was curious. It was a turtle! As the tusker came closer, the turtle rushed into the water from the mud-puddle. And then came the surprise. Seeing the turtle slipping into the water, this tusker lifted his tail and ran for his life as if some giant threat had emerged from the water. He did not return to the waterhole! 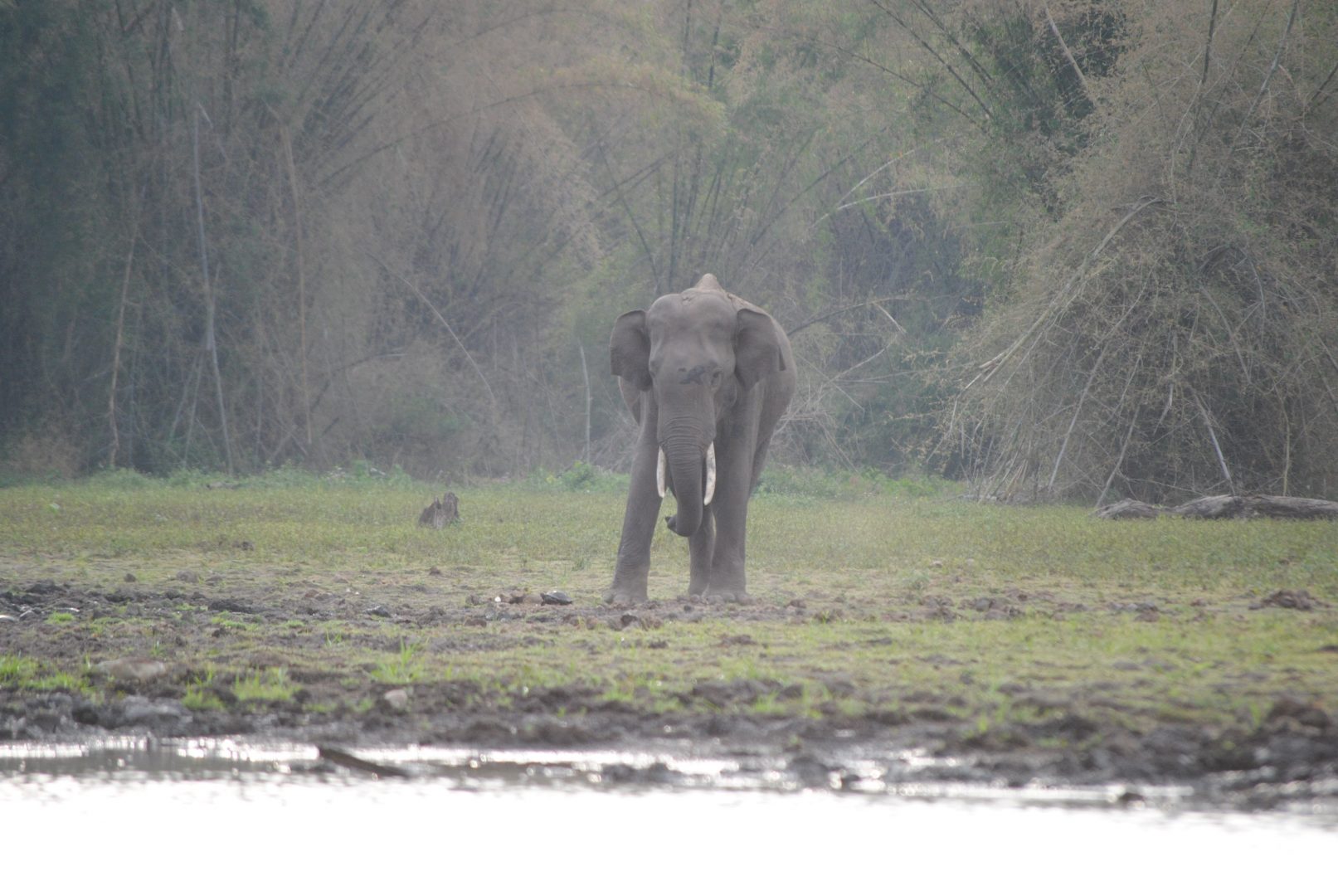 I was left perplexed and amused. After showing his strength to his subordinates, how could a ‘bold’ tusker fear a tiny turtle? Like human beings, elephants too have personalities. A few studies on semi-captive elephants showed how elephants differ in terms of how brave, friendly, social or aggressive they may be.  To observe their contrasting personalities in the wild is, indeed, fortunate… 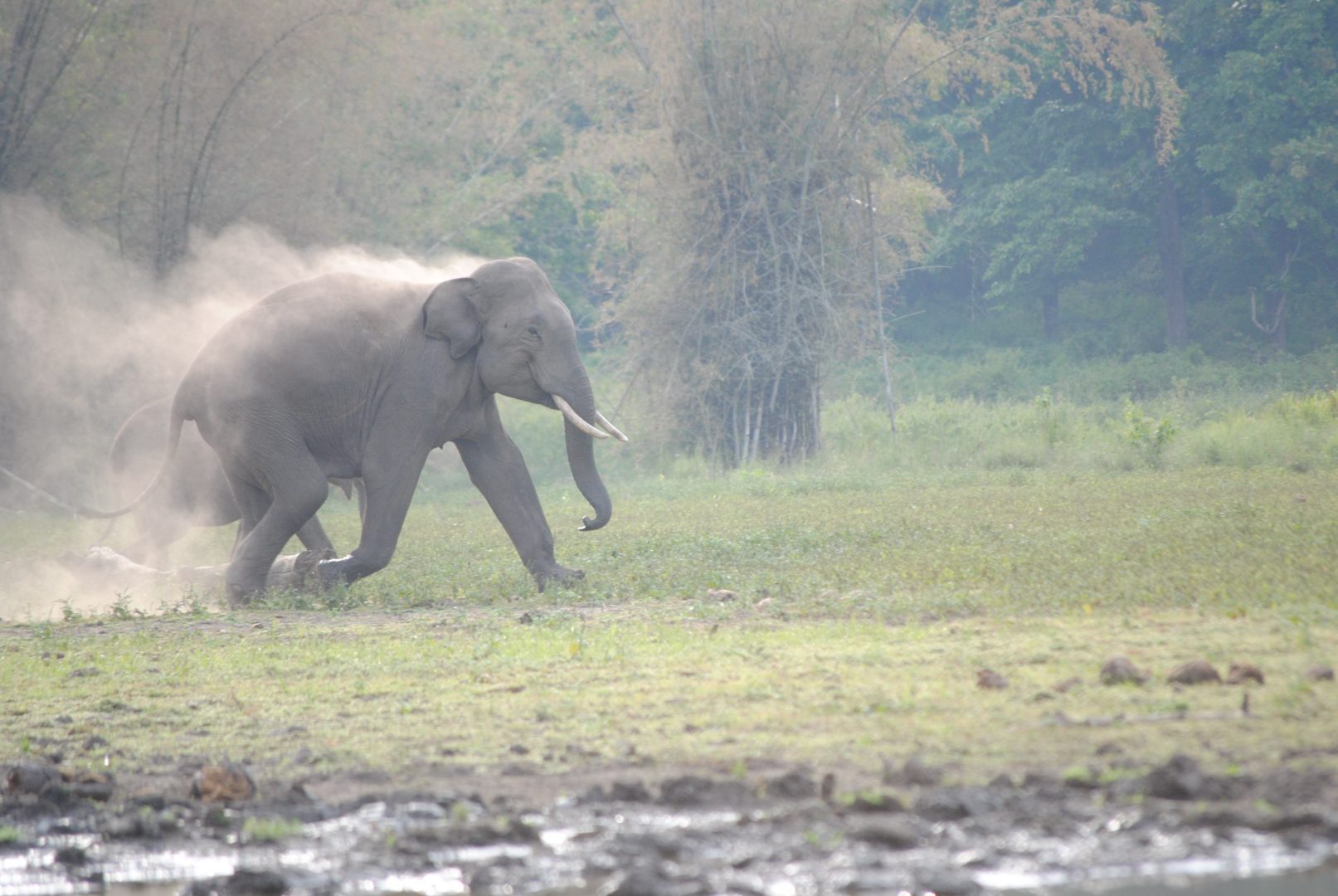