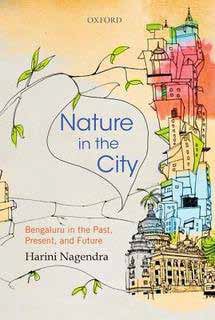 Nature in the City: Bengaluru in the Past, Present, and Future

This year, one of Bangalore’s largest citizen protests incidentally followed the publication of Harini Nagendra’s book – ‘Nature in the City – Bengaluru in the Past, Present and Future’. It saw thousands raising their voice against the construction of a massive steel flyover that aimed to ease traffic en route to the airport, but at the cost of several hundred trees. Such struggles to conserve nature amidst rapid urbanization exemplify the relevance of Nagendra’s book today – of the need to understand nature and its immense contribution to the ecological, social and cultural fabric of a city.

Nagendra has close ties with the city she describes – she grew up here, and is now a Professor of Sustainability at Azim Premji University, Bangalore. She draws greatly from her academic research, covering the ecological history of Bangalore going back several centuries, and gives a detailed account of changes nature has undergone in its private and public spaces leading to the present. She looks at the ecology of Bangalore from various vantage points – home gardens, slums, avenues and parks, sacred places and lakes. But this is done in a very personal way, by weaving her findings with stories of people who interact with nature every day and whose reality is the changing face of this city. These multiple experiences of nature and people in Bangalore, come together to offer a picture that speaks of the city’s disconnect from its underlying terrain, a shift in the role of nature in people’s lives, simplification of biodiversity, and reduced access to nature.

The most compelling parts of Nagendra’s book are where she talks about the city’s history. There are several interesting details here – the historic recognition of Bangalore as its malnad (rocky region) and maidan (plains) parts, written records of settlements in the city from as far back as the 6th century, records of tigers and wild boars in now residential areas, or the turbulence of 17th century Bangalore when it changed hands between half a dozen dynasties. Nagendra uses history as a tool to explain ecological patterns today and the story of Bangalore’s lakes is one of her most moving narratives. Starting from a description of Agara lake from the 9th century to Col. R.H. Sankey’s construction of Sankey lake in the 1880s, she describes the centrality of lakes to the existence of Bangalore using several archival sources. She details the key events leading to their degradation, causing historic lakes such as Dharmambudhi to be converted into the city bus terminus, and Sampangi lake to be built over as Kanteerava Stadium.

Against the image of Bangalore’s past, Nagendra’s descriptions of the city’s present take new meaning. The shrinking of nature becomes apparent, not just in physical space, but also in the mental space of people who no longer directly depend on its trees and lakes. Those who do, are marginalized even further. One example is of the basket weavers on Krishna Rajendra Road in Basavanagudi, who worked in the shade of its large avenue trees for over half a century, but were forced to move a few years ago when these trees were felled for the Bangalore Metro Rail project. Nagendra talks about people’s protests against this move, which unfortunately failed, but also many other civic protests in Bangalore’s history that were successful. Though the book makes one feel grim about the fate of nature in cities today, Nagendra is optimistic that collective action can still help make nature an integral part of cityscapes.

Nagendra’s work is a synthesis of Bangalore’s ecological history and an extensive case-study of the effects of urbanization on nature. To someone who is familiar with the city, it offers more – names and places evoke intimate images in the mind and the book speaks to the reader on a very personal level.

Bharti Dharapuram is a doctoral student at the Centre for Ecological Sciences Indian Institute of Science, Bangalore. bharti6587@gmail.com.