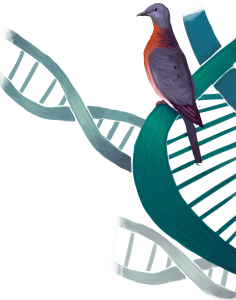 In a world with limited funding and fast-vanishing space, most conservationists work towards preservation and management of existing animal populations within available land. They work to prevent extinctions. However, there are also those who would rather apply their efforts towards resurrecting extinct animals. This ideology may seem a bit far-fetched and is not particularly popular with the larger community. From minor scepticism of the methods used, to outright dismissal of the entire concept, the idea of recreating extinct animals tends to divide a room. Torill Kornfeldt’s book, The Re-Origin of Species: A Second Chance for Extinct Animals attempts to bring these disparate opinions to the table and provides plenty of food for thought.

The resurrection of extinct species is definite cause for trepidation. There are too many movies out there with apocalyptic settings and out-of-control dinosaurs. The author shares similar concerns and sets out in search of meaning and reason behind the concept, taking us with her to meetings with scientists across the world. If we are resurrecting species, how do we decide which species to recreate? If a species has been extinct for 10,000 years should we invest time and money in bringing it back? What about a species that went extinct only 100 years ago? Or one that is not yet extinct but stands on its precipice? Will it be a real mammoth if we’re only tinkering the DNA of an elephant to produce certain mammoth-like features?

Kornfeldt does not want to give us the answer. Possibly because it is a philosophical question that we need to present to ourselves. The book acts as a guide on this journey, providing an insightful blend of scientific objectivity and dilemmatic humanity. The words encourage the reader to think about where they stand on the spectrum, how they might feel about having mammoth-like creatures roaming the Arctic scapes or cowering under the poop shower of a hundred thousand passing passenger pigeons.

Each chapter is dedicated to ongoing ‘de-extinction’ projects on species – mammoths, passenger pigeons, bucardo (Iberian ibex), aurochs – and explains key concepts and methods involved in bringing back the dead. Since supernatural spell-casters are highly elusive, we are left with expert scientists and tiny cells in petri dishes that are not nearly as insignificant as they may appear to be. The author does well to articulate with simple and relevant analogies complex methods such as genome sequencing and CRISPR (which is all the latest buzz). The writing maintains a good balance between the ethical and logistical complexities involved in species revival. 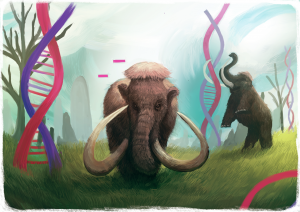 Periodically, Kornfeldt brings the mystical back to the courtroom of reality; it is not about the first passenger pigeon or even the first 100 pigeons. This would be a technological advancement indeed. But the aim of species revival, at least with the passenger pigeon, is to restore earlier processes of ecosystem functioning. And to have any intended impact on the ecosystem, we have to not only create many pigeons but we also have to figure out how to get passenger pigeons to form large flocks (hundreds of thousands in one flock), the way they used to in the 19th century. This is a mighty task, given that the cells in the petri dish are still years from taking flight.

Maybe reviving extinct species is not altogether a bad idea. Take the northern white rhinoceros, for example. They are viably extinct today, with only two females and no males remaining. As recent as September 2019, scientists were able to create two embryos using eggs from females and frozen sperm from dead males. The embryos are on their way to a surrogate southern white female rhino. The long-term goal is to recover this species and hopefully safeguard it from the very threats that drove it to the edge of extinction.

Before this book, I didn’t think to consider the role of mammoths in keeping carbon dioxide locked into the permafrost in Siberia’s vast tracts. As temperatures continue to rise, the ice breaks and carbon dioxide is released into the atmosphere, further increasing temperatures. If mammoths were present, they would compact the snow with their movements to insulate the frozen layers beneath, while also encouraging growth of light-coloured grass (which would reflect the sun’s warmth), overall preventing the ice from melting and keeping the greenhouse gas trapped. Why mammoths? Why not introduce a similar species to fill that niche? The scientist working on this project currently drives around an old Soviet armoured tank to simulate a mammoth knocking down trees, and he hopes it’s only temporary. 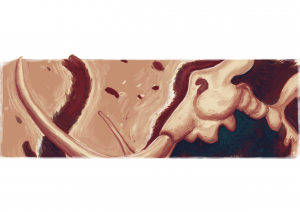 Even though the book briefly mentions the threats that drive a species towards extinction, it does not spend much on it. The author does acknowledge that these threats need to be addressed, perhaps simultaneously, but prefers placing the context of the book squarely on a post-damage situation, to focus on the philosophical debate around de-extinction rather than the causes of species decline.

Easily the best feature of this book – it’s backbone – is how it constantly initiates discussions on the morality of de-extinction. It asks the big questions of whether we should even bring back extinct species or not, how it may affect the way we interact with nature and our current views on conservation, whether it may inadvertently make us complacent to species on the edge, and what if the worst happens and we suddenly find ourselves in Jurassic Park part 6 without Jeff Goldblum.

The voice of the author at times trembles with uncertainty, fills with hope, shivers a little while pondering the whys and hows of de-extinction. As a reader, you may find her words mirroring yours – trying to choose which side of the fence to land on.

I’m left wondering if the appeal of species revival, like other concepts in conservation, depends on context. I would have liked for the author to arrive at a decision, albeit for herself, in any one species revival project, and share her reason with the readers, as an example of how to navigate this “philosophical quibble in my (own) mind.” If we are indeed re-creating species, I find myself more accepting of the rhino project than the mammoth project for instance, and even then only after completely eliminating poaching and other threats to rhinos. Can we truly predict and prevent any possible mishap in the re-origin of species? Where would you draw the line?

Divya Ramesh is a behavioural ecologist looking for patterns in nature through observations, math, words, and pictures.

Hari Kumar is a freelance Graphic designer currently based out of Chennai. He has an interest in working on books for children’s education and working with technologies like augmented and virtual reality solution.