A not at all exhaustive list of colours in Anshi 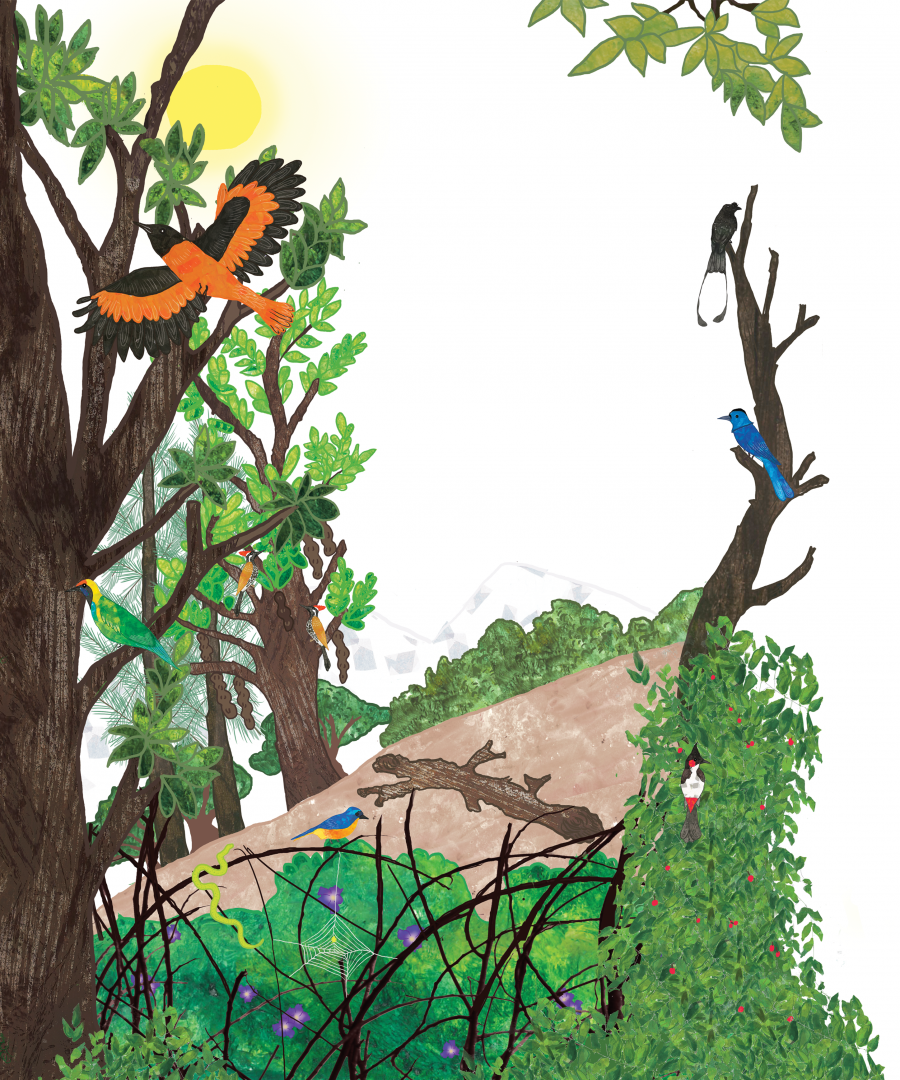 Immediately, arrestingly, there seems to be serene, unadulterated green. But look a little closer, and you’ll see that it’s a mishmash of many greens all co-existing, as they have for years and years.

From a rocky outcrop, you see the landscape of jade, emerald, moss, and seaweed, and you can’t help but marvel at their sheer diversity. In the senescence of the full grown tree’s leaves, you see not just green, but also the strangest shades of red and brown. They cling on desperately, so close to the gentlest, shyest of greens. The green that is so new to the world, and is growing resolutely every day. Then there is the green that strikes fear in your heart, because when you walk through a dense patch of Carvia, you know you don’t walk out alone. Dozens of ticks have come out with you, on your pants, on your hands, on your legs – you’ve walked through a veritable metropolis of their homes. There is the excellently camouflaged vine snake who makes you stop short and notice his slender body, his grace as he watches you gawk at him. You move, he moves. He doesn’t like any part of the vibrations you’re causing. You’ve made him leave his spot in the sunlight now, slithering away into the undergrowth. The leafbird who forages high in the canopy has no time for you. She will not let you get a good look at her, even if only to watch her and make your observations. She’s busy, she merges into the trees. You see some greens that have invaded this land – the dull grey-green of the Casuarina and the white-green of the dying Acacia leaves. You walk past them many times a day, in the village.

Then there is that astonishing blue of the sky, which robs you of all thought for a second, when you duck out from under the canopy. Or, more beautiful still, when you catch glimpses of it amidst the green. It’s hard to imagine that any photograph could capture the startling contrast in all its glory in that visceral way the human eye can. But blue flies through the forest too. The monarch, with his petite black cap, calls in seemingly every flock of birds you see. The fairy bluebird suns himself on top of a leafless tree with his partner for a while, and with a final sharp call, they’re off. The bright blue of the flycatcher who wags his tail up and down as he sits on a branch for minutes on end – only to dive at the ground to catch a flying insect – will keep you entertained as long as he is around.

There are those purple flowers that stubbornly grow on well-walked trails, wild and obstinate. But also bold in the brown of the forest floor and the green of the undergrowth. Later, you see it take over rice fields abandoned for the season, unknowing of what is to come in the following summer when the crops are planted again.

The flashy yellow and orange of the spider that painstakingly builds a web across shrubs. A large web, hoping for a multi-course meal. You walk right into her sometimes, and by then it’s too late. You’ve torn the web apart and she must rebuild it. The orange of the minivet biases you, because what bird wouldn’t look dull next to that plumage? The abundant fulvettas of the forest stand no chance – their nondescript browns are no match for that orange that begs the question, ‘Hasn’t this bird heard of a little thing called camouflage?’ The female is no quieter in her yellow plumage, only smaller than the oriole of a similar shade.

The flameback woodpeckers work in pairs, trying to crack open Entada pods with their strong beaks. You hear the racket from quite a distance away. They do not care – they are determined to get those insects that are theirs only to claim. But you certainly see the rapid movement of that red crest as they work their way through pods larger than their whole bodies. Not far away, you see ripening berries in shades of red and yellow hanging on a tree that is being overrun with doves and bulbuls galore.

The lonely brown that signifies death in a tree, termites feasting now on the fallen giant. What a spectacle it must have been, the day this tree fell to the quiet forest floor! How the mighty have fallen indeed. You look in awe at the stately trees still standing around you, and then your eyes travel back to this one, crumbling slowly to powder and dust.

Crunch. Crunch, crunch. That’s you walking on the forest floor in your heavy shoes, unlike the quiet cats of the forest with their velvet pads. Whoever knew there were so many colours of decay? There is green, grey, red, yellow, orange, purple and brown. And mottled black where you see fungus feeding on the remains. There are dead leaves choking small streams, deceiving you into thinking you can step on them.

There is black and white too, you know. Black in the thieving drongos, in shimmering bronze, ash, and long racket-tailed. They swish and swash from the canopy to the forest floor, everywhere at once, and incite a flurry of activity in every flock they steal from. On a lonely road near a one-house village, you see ten cattle grazing. They must be ushered through the forest, back home, from where they’ve strayed. And as they herd onto the path, you see that last one is white, with an oval patch of black on his bottom. There is no way this cow will leave without eliciting that smile from you, as he trots merrily away with his friends.

Then there are colours that cannot possibly be described. To call the sunlight golden as it bathes the trees in the morning and warms the forest seems somehow inadequate. Can sunlight be a colour? In its absence, the forest has so very solemn a glow to it – you begin to understand where the fairy tales learnt to describe their forests from. You look around, and there you are, in all the most ethereal ones, all at once. Colours cascade around you, as they have for millennia.

Priyanka Hari Haran is currently a research assistant at the Ashoka Trust for Research in Ecology and the Environment
(ATREE). This piece draws on her master’s dissertation work with mixed-species flocks of birds in Kali Tiger Reserve.

Maanasa Ganesh is a designer, Japanese aficionado, and ardent bird enthusiast. As travelling and studying new cultures
refreshes her creativity, she is shifting her base to Tokyo to explore and absorb the design landscape.