A tale of the misunderstood crocodile 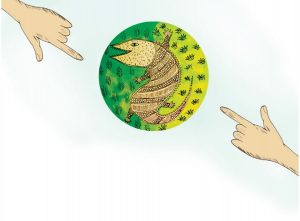 “We don’t go alone into the forest because there are crocodiles.”

A woman states this while stirring fragrant, crispy mudi, or puffed rice, on a wood-fired chullah. My field assistant and I crouched down to catch a glimpse
of how each rice kernel pops into a plateful of deliciousness.

Another day in Odisha, an acquaintance recounts his encounter with a fascinating beast.

He says, “While I was fishing by the river, a crocodile attacked me out of nowhere. I somehow managed to escape unhurt.”

How crocodiles help us

But what they fail to understand is how these fantastic creatures that bask along riverbanks, soaking up the warm sun’s rays, play a crucial role in the river food chain as the apex predator, much like the tiger. They help increase the general population of fish in the river by preying on predator fish that eat smaller fish and destroy fishnets.

Similarly, the scavenging role in the ecosystem is almost never discussed. What keeps the river clean? The crocodile! They ensure carcasses decompose properly, keeping the rivers clean and healthy. In this region, the crocodiles also play a very significant role in keeping mangrove forests healthy. Part of the government’s efforts in reviving the species from the brink of extinction have made sure that Phoenix paludosa, a mangrove palm is part of the re-afforestation efforts in the park. The bushy and scrubby growth of the palm provides the perfect nesting habitat for the reptile. The reptile also creates a sense of fear and caution, keeping villagers away from deep forested areas. They only enter demarcated forest trails, always in groups to harvest firewood. Villagers also do not trouble the reptiles by destroying their habitat.

Crocodiles and humans share a bittersweet relationship. It’s interesting how mythology sometimes plays such an intricate role in influencing how people interact with wildlife. The Indian mugger, for example, is often seen as the vehicle of the river goddess Gangadevi. The depiction portrays a calm and benign presence of the creature rather than the usual fearsome and deadly representation of the reptile.

A popular story narrates how the Hindu God, Vishnu, had to descend to Earth to rescue the elephant king Gajendra from the clutches of this aquatic beast. The elephant struggled for over a thousand years to free itself from the crocodile’s powerful hold, finally resorting to divine assistance. During my time with the villagers, many used this tale to explain why they keep away from the infamous reptile. It was also interesting to know how some felt keeping away was better than simply troubling the creature.

Ironically, religious significance often overrides ecological significance in India. Occasionally, both coincide beautifully and make for enriching stories. At other times, they don’t. For example, villagers value the mangrove forest, locally referred to as Hentalban or Sundari-ban, for its ecological significance. The forest’s ability to keep the shoreline intact, attenuate large waves, and provide a protective net against frequent storms is well known. In contrast, the ecological significance of the crocodiles is less clear. They are usually feared, at times revered too, but not for their important role in the river ecosystem. 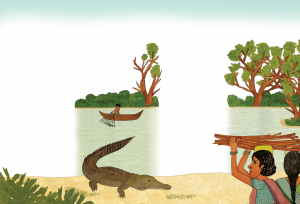 Coexistence or no existence?

However, the large population density of crocodiles and humans in the region has made it difficult for both to keep their distance and live peacefully. A recent study reports that in the last 15 years, about 57 people were attacked by crocodiles in Bhitarkanika. Among those who were attacked, 27 lost their lives. The remaining suffered injuries, some major.

But from my interaction with villagers, it appeared they were more upset at not being adequately compensated for living in such close proximity to these stealthy creatures, oblivious of human-forestwater boundaries. Most felt the process to acquire compensation was tedious and non-transparent. Some strongly felt that if extracting firewood was a crime, they should at least be provided enough compensation when they suffer losses from animal raids.

They just wanna chill Bhitarkanika harbours the saltwater crocodile (Crocodylus porosus), the largest species of the crocodilian family in the world. Although presently this species is at a much lower risk of extinction, the ‘70s was a grim decade for all three crocodile species found in the country (the freshwater species Gavialis gangeticus or the gharial, and Crocodylus palustris, also known as the Indian mugger). Commercial killing and habitat loss were two major things that pushed these creatures to the verge of extinction.

As you walk along the muddy roads in Bhitarkanika, you will notice ample green. Yellow-ish light green shade of the rice fields on one side, a dark dense green hue of the mangrove forest on the other. If you ask a villager where you can spot a crocodile, he’ll point to both directions.

Every year, the crocodile park is shut to visitors during the annual crocodile census scheduled in the first week of January. It is a good earning time for some villagers, especially those who possess boats. According to news outlets, this year, officials reported about 1742 individual crocodiles. This is a marginal increase from the 1713 individuals reported in 2018.

“But the tourists don’t understand,” a Forest Guard explained. “There are signboards everywhere, but they still throw stones at them because they want to see them move.” He emphasises, “These lazy creatures just like to stay put in one place and soak up the sun. Is that too much to ask?”

Dina Rasquinha is a social ecologist and a communicator, currently pursuing her Ph.D. at the University of Georgia. She enjoys a good cup of tea and a story.

Maanasa Ganesh is a designer and illustrator currently living in Tokyo. She loves traveling, studying new cultures, visiting museums, and looking for
inspiration in nature.