Act Responsible at the Top 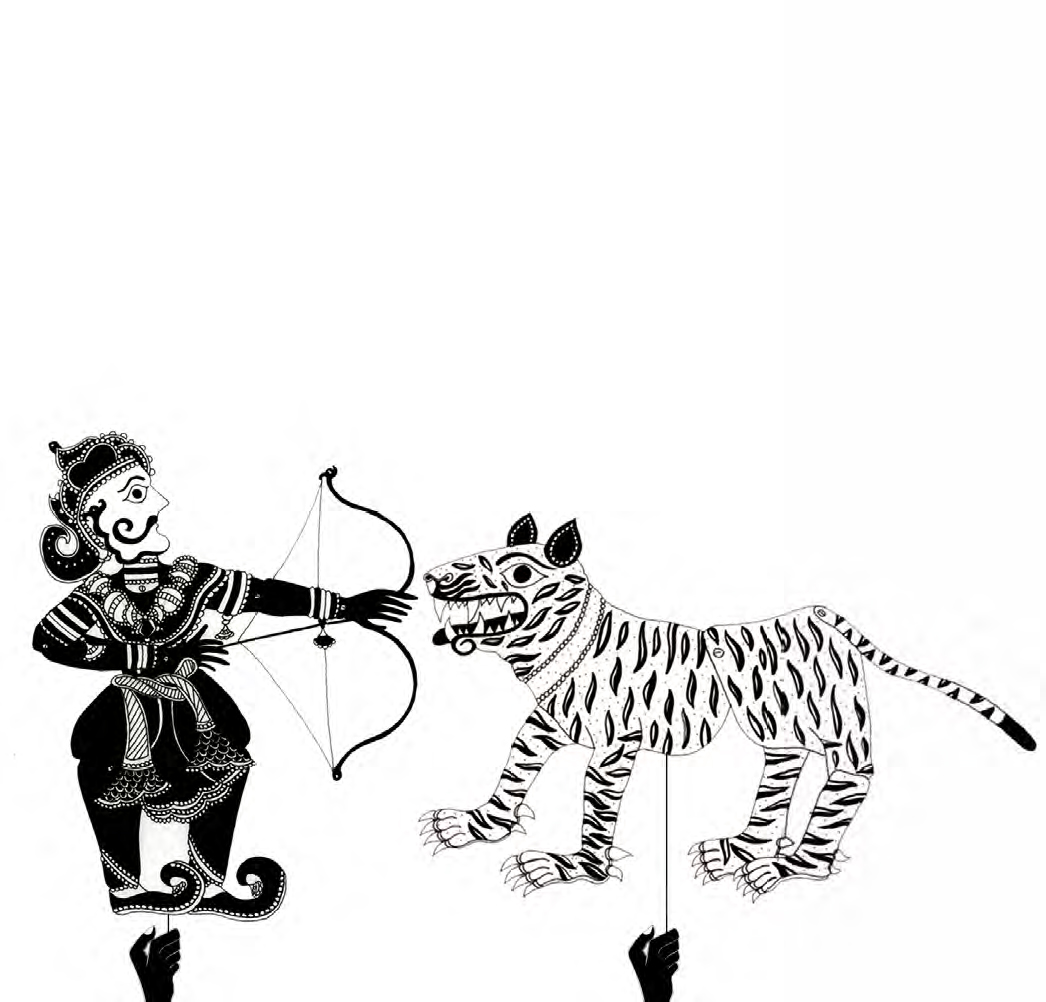 Much of human-carnivore conflict is supposed to be either accidental or caused by old/injured animals, but how do we explain deliberate attacks on people by healthy, mature carnivores?

Big carnivores scare many of us. They are nature’s most effic-ient killers. But the “threat perception” seems disproportionate to the threat. A very conservative estimate of the big five—tigers, lions, leopards, wolves and crocodiles—will put their collective population at 10,000. Each of them makes a kill every week. There are about 15 crore people living in 1,70,000 villages around India’s forests, offering the biggest prey base to pick and choose five lakh kills from every year. Yet, how many people are killed by carnivores? Even accounting for those that go unreported, the numbers do not add up to the 200 mark.

Indeed, the numbers tell interesting stories. In India, more than 30,000 people die of rabies due to dog bite each year. Venomous snakes claim about 50,000 victims. No less than 80,000 die of injuries caused by road accidents. And yet carnivores are considered a far, far greater threat to human safety. On one hand, people are known to overestimate rare and dramatic events. On the other, maybe it is because carnivores consider us food.

So, are we wrong? The etymology-carne (flesh) vorare (devour)-is a giveaway. Obligate carnivores live exclusively on meat. They prefer herbivores but are not fussy about other meat. Technically, that makes us, omnivore humans, carnivore food; just like all omnivore primates are in the wild. Surely, whatever be the numbers, quite a few people still do get devoured by carnivores across the world.

But contemporary science tells us that carnivores do not consider us food. The figures cited above support the claim. Almost three-quarters of a century back, Jim Corbett was quite unequivocal in his Man-eaters of Kumaon: “A man-eating tiger is a tiger that has been compelled, through stress of circumstances beyond its control, to adopt a diet alien to it. The stress of circumstances is, in nine cases out of ten, wounds, and in the tenth case old age-human beings are not the natural prey of tigers, and it is only when tigers have been incapacitated through wounds or old age that, in order to live, they are compelled to take to a diet of human flesh.”

To the list of old and injured carnivores, wildlife biologists add inexperienced or alarmed animals as potential man-killers (not man-eaters). A chance encounter with a carnivore, particularly a young one, may result in accidental attacks but such kills are not usually consumed. Some attacks are blamed on mistaken identity when a squatting person is taken for a four-legged prey. Experts have identified another condition—significant loss of wild prey or habitat or both— as a trigger to conflict.

Some biologists, pioneer among them Vidya Athreya in India, have recently pointed out another manmade aspect of conflict. Their research shows that the policy of capturing and trans- locating so-called problem animals exacerbates, and even creates, conflict because such displaced carnivores, traumatised after prolonged captivity, try to find their way home and encounter people on their way.

Clearly, the consensus is that carnivore attacks on humans are not natural and happen only under a set of exceptional circumstances. Otherwise, given that so many of us are around, the human casualties would surely have been many times higher. But do these arguments settle the issue? Not quite. Records show that on many occasions, perfectly healthy, undisturbed carnivores in their prime have been killing and feeding on people. So if a few individual carnivores are eating human flesh, and since potentially all of them can, what keeps the rest of them away?

Also, the contemporary assertion—that carnivores, under normal circumstances, do not consider us food—is, well, contemporary. The great apes were very much part of the carnivore menu. So were the early humans. Carnivores continued to attack and kill scores of people throughout recorded history. The contemporary assertion gains ground only because fewsuch cases occur in recent times. Of course, the trend is unmistakable. The frequency of attacks on people by carnivores has been reducing steadily with time. Could it be because large carnivores are getting fewer by the day? Or is it because they have been undergoing a behavioural change?

Loss of population does not quite explain it. If we go by the notional number of 40,000 tigers at the turn of the last century (plus easily 100,000 leopards, wolves etc) and the corresponding scale of reported conflict (up to 10,000 in the 18th century), it becomes clear that even 200 years back, carnivores had limited dietary interest in us.

Can we, therefore, attribute the historical trend of consistently reducing conflict to a changing attitude in carnivores that had considered early men as natural a prey as anthropoids but slowly learned to drop modern man from the list? If we can, it is important to understand the factors that triggered this change in carnivore behaviour over so many thousand years. It is even more important to explore if such factors can get locally or temporally reversed. Because such reversal may explain why certain individual carnivores that do not fit in the exceptional category (old, injured, alarmed, prey-less or translocated) still go for human prey today. Or why certain areas (eg Sunderbans) record consistently higher casualties or certain pockets (eg Tadoba) suddenly become conflict-prone.

In most human societies, carnivores are not considered food. Early man hunted carnivores mostly to protect himself. From human fossils and cave paintings to scriptures and folklore, there is evidence that carnivores were one of the prime threats to human life. The mighty animals’ larger-than-life presence frequently transformed them into gods and demons alike—entities considered almost as powerful as other great natural forces.

Things were probably slightly more complicated on the other side. As hunter-gatherer humans emerged as a predator species in their own right, it was not easy for carnivores to negotiate with them as just another competitor. Three factors that made (and still make) carnivores wary of us are numbers, tools and motive. Humans hunted in groups. They also used tools. The first factor is traditionally respected in the wild. A solitary large cat, for instance, rarely takes on a pack of wild dogs or an elephant herd. Tools turned the balance of power upside down. Initially, tools substituted for canines and claws. Then tools became technology. From slingshots to catapults, bows-and-arrows to guns, better guns and the arms race was over soon. We all know that story.

In any human society, a carnivore hunter was always a hero. The pride and thrill involved in hunting soon turned it into a popular sport. Game hunting upturned the fundamental laws of the wild where animals kill either for food or for protection. Over time, the carnivores had to learn how to deal with a species that often killed arbitrarily. This learning process continues and it has not been particularly kind.As humans became increasingly organised and technologically evolved over centuries, these factors probably made carnivores adopt a “no risk” policy vis-à-vis people over time, so much so that it became normal for most to walk the other way when humans were in sight. Many shikar accounts relate how tigers or leopards did not risk charging people unless disturbed or threatened.

But a lonely, unarmed human is still the easiest prey for any large carnivore. To stretch the elephant analogy, we know that tigers, otherwise wary and respectful of elephant herds, do occasionally kill isolated calves. I have known instances of tigers successfully defending kills against smaller wild dog packs, something they will not usually attempt against bigger packs.So, is it possible that even healthy, mature carnivores may seek out lonely, unarmed persons for food? If it is, given that there is still no dearth of lonely, unarmed persons in and around our forests, why are such attempts so few? Probably because a wary carnivore never attempts a human kill unless a meticulous risk assessment assures it of a certain safety threshold.

So what factors determine this safety threshold? Do carnivores balance the risk of attacking humans against the availability and their own ability to get other prey? On one hand, hunger (due to injury, inexperience or lack of wild prey) can push carnivores to target high-risk prey. There are instances of desperate carnivores targeting people in broad daylight in crowded places. But this rule is likely to apply only to certain individual animals in distress and not to a population as a whole. There is no example of a large number of carnivores turning on people even in the most degraded, prey-deficient forests. On the other hand, it is possible that even healthy carnivores will prey on people when they can assess the risk itself to be particularly low. This may explain occasional, deliberate attacks on people by carnivores that are not hungry or injured.

Most instances of sporadic conflict seem to have a few factors in common. First, the victims ventured inside or very close to a forest. Second, they were alone. But many others do so every day and some carnivores, like leopards, even share space with people. Perhaps, a third factor decides the tipping point. Perhaps, the careless victims “unmindfully” allowed the predators enough undisturbed time to stalk, observe and be sure.

But what explains the high conflict zones like Sunderbans or Tadoba? Perhaps, numbers do. Compared to other forests in In-dia, more people venture into Sunderbans (fishing, honey collec-tion etc) and Tadoba (for bamboo). In both places, they also spend a long time inside the forests. Most fishing, honey-collect-ing or felling expeditions inside Sunderbans last more than a week. Thanks to a recent state law that makes bamboo products legal, villagers around Tadoba not only enter the forests in thou-sands but also spend long hours cutting down the bamboo to thin strips which are then carried out of the forests.

This means more opportunities for carnivores to stalk, observe and be sure. With more practice, comes more experience. Cor-bett’s Champawat maneater reportedly killed more than 400 people (a random assessment only indicative of the long killing spree) and in the process learnt to single out victims in groups. Probably for the same reason, tigers have been reported to have attacked the last persons in groups walking single file in Sunder-bans—a strategy that defeats the security of numbers.

Moreover, while there is little scientific evidence of so-called maneaters developing a taste for human flesh, it may be possible that they learn to appreciate the relative ease with which a human can be hunted down if the risk (numbers and arms) is low. This may explain those cycles of attacks in crowded forests (many potential targets) as very few villagers stay closeted in groups or carry guns (minimal risk) while making forays.

Of course, other manmade factors have created what Jim Corbett called “stress of circumstances” at both Sunderbans and Tadoba and may partially explain such high conflict. Poaching leaves behind orphaned, inexperienced or, injured carnivores. In the past year, five Tadoba tigresses have disappeared—feared poached. A number of faulty interventions like capture-release are rampant in Sunderbans. But, such interventions do not happen on the Bangladesh side where conflict is acute. But then, too many tigers are poached (both for revenge and profit) in Sunder-bans which might have created a highly disturbed population.

Ultimately, each local conflict demands to be understood in terms of local factors. We have little data to draw any sound con-clusion anywhere and thorough ground research is long overdue. Human-carnivore conflict has always evoked strong emotions. There are greater pressures at play today but we had better act responsibly. We have our right to safety, but that is not secured through exterminating other apex species. It is certainly not safe being alone. Not while walking in the wild. Not at the top of the food chain.

Jay Mazoomdar is an independent journalist and writes on environment, conservation and wildlife issues.