WHAT ARE THE IMPLICATIONS FOR HUMAN LIVELIHOODS AND NATIVE BIODIVERSITY AFTER THE ABANDONMENT OF TEA PLANTATIONS?

In the mid-1800’s, many large plantations were established at the expense of natural forest in many parts of India. The British and the subsequent Indian government leased these plantations to private developers on a long-term basis, usually for a period of 99 years or less. In recent times, many such plantations surrounded by forests have been notified as Protected Areas (PAs). While most of these plantations have continued to function for decades despite falling within the larger boundaries of PAs, many are now being abandoned either due to expiry of leases that have not been renewed subsequently by the Government, or simply due to the decline in profitability of the plantations. What happens to these plantations after they are abandoned?

Tea plantations within the Agasthyamalai range (southern Western Ghats, Kerala) have been vulnerable to poor markets, decreased demand, increasing labour costs, fluctuating global prices and insecurity over lease renewals. Litigation between plantations and the government or amongst the plantation stakeholders themselves (plantation owners and workers) has also been responsible for the non-maintenance or cessation of operations in plantations. Recent data from the Tea Board showed that between 2004 and 2007, the tea plantation area declined by about 55 % just in the Trivandrum division. In this short note, we examine what processes are under play in abandoned plantations in the Agasthyamalai hills, Kerala, regarding the recovery of native forest plants and tree species, and the social and economic consequences of abandonment for the plantation stakeholders (owners, workers, etc.).

Following abandonment, if a plantation is left unmanaged and undisturbed, it experiences different colonisation patterns depending on its location. Many invasive species colonised plantations at different elevations. At the elevational range of 900-1000 metres above mean sea level, Lantana camara took over 70 to 80 % of the area in plantation abandoned for nineteen years. A similar trend was observed even in recently (seven year old) abandoned plantations between 600-1000 metres in Ponmudi (Kerala), with invasive species like Eupatorium sp., Cromolaena odorata and Lantana camara taking root. Many studies have highlighted that the growth and spread of invasive species leads to changes in plant community composition, which can affect the recovery of native forest species. At elevations of 1300 m and above, tea plantations abandoned for nineteen years were colonised by the tea plant itself. In such cases, they can grow into tall trees that completely shade the forest floor, making growth of sunlight-loving forest species difficult.

Social and economic consequences of abandonment

The tea plantation industry is one of the major agricultural sectors in India, providing the most employment. The current scenario of dwindling plantation areas leads to an increase in unemployment and livelihood-related issues of workers. In the Agasthyamalai region (Trivandrum division) of Kerala, many plantations have been abandoned and workers are struggling to find alternate livelihoods sources. Many families are working as causal labour in road constructions, or in some cases (eg., in Bonacadu estate) workers themselves started small areas of tea cultivation to sustain themselves, where they pluck the leaves and sell them to middlemen at low prices. In Ponmudi, after the Ecological Fragile Lands Act was enforced in 2003, many tea plantations could not sustain themselves, as the act prohibits estates from reviving non-cultivated areas within plantations. Managers from Merchiston and Ponmudi tea estates mentioned in conversation that now they do not have work all through the year for their plantation workers due to this Act. Workers from tea plantations are now registered under the National Rural Employment Guarantee Act to sustain their livelihoods.

The issues arising out of plantation abandonment are complex and need to be studied in greater detail. On the one hand there is an urgency to understand the ecological processes within the abandoned tea plantations and surrounding forests while on the other hand, social and ecological issues cannot be neglected, especially when large areas outside the PA network are constrained by newer laws. There are no win-win situations but a working compromise needs to be made where workers’ livelihoods and ecological stability of the landscapes are met. 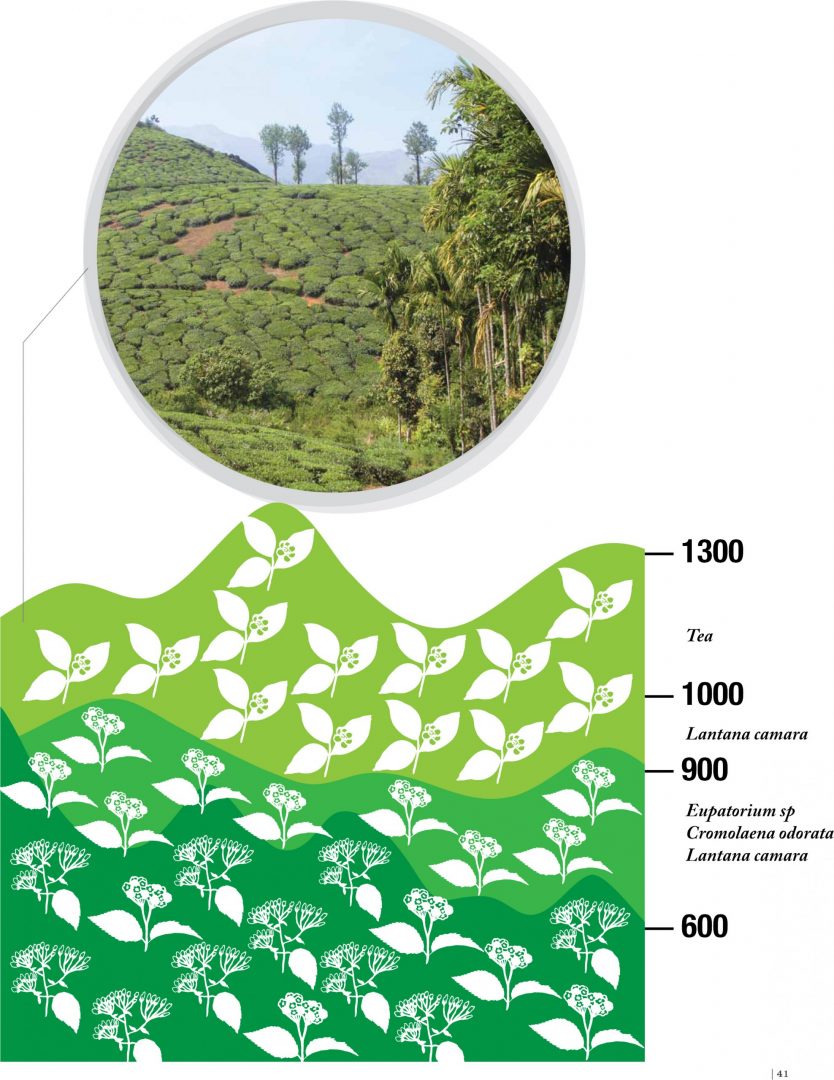 HC Chetana is a PhD student at the Ashoka Trust for Research in Ecology and the Environment (ATREE) and Manipal University, and T Ganesh is a Senior Fellow at ATREE. chetan@atree.org