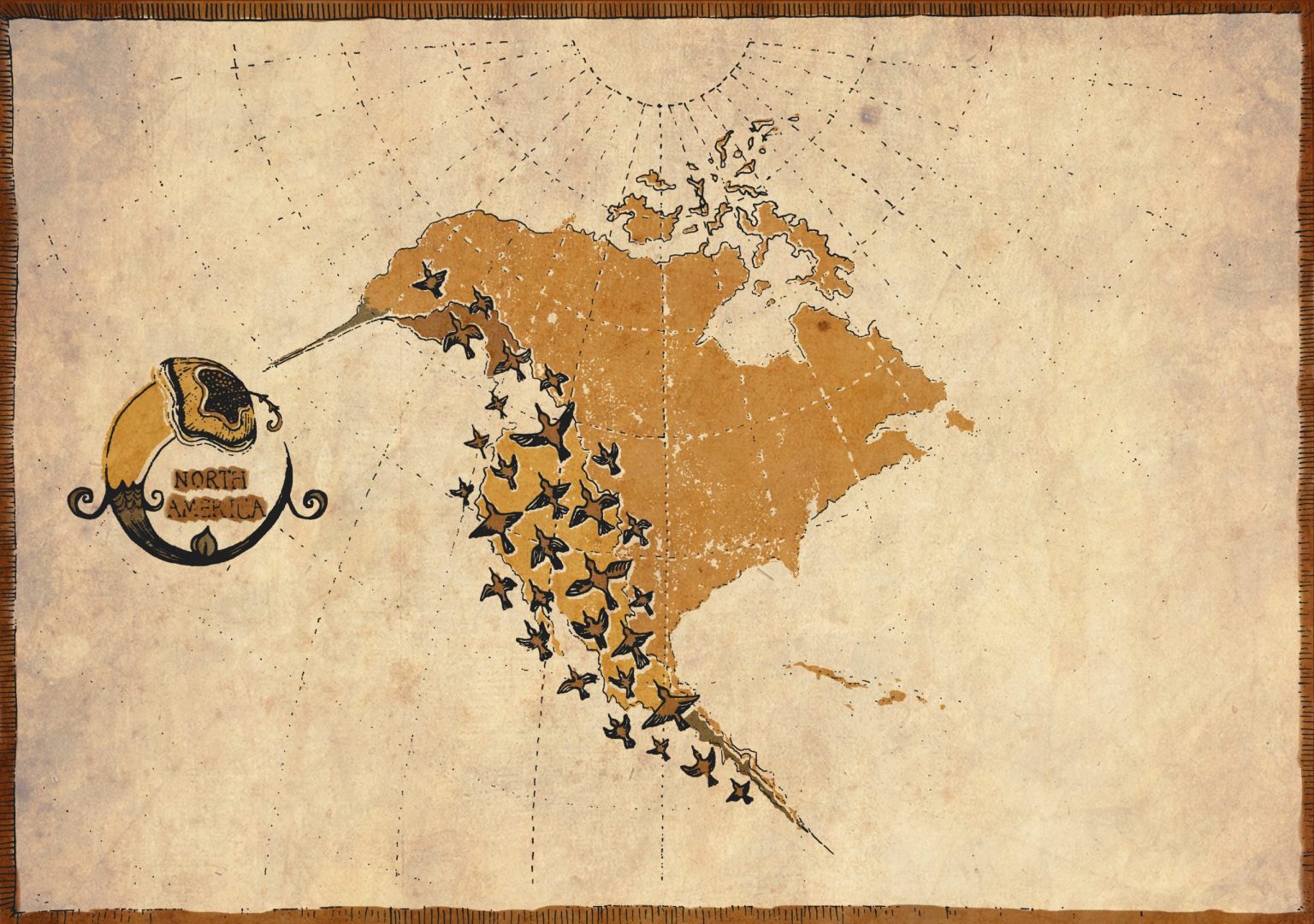 It is January, and deep in the Mexican tropics, a change is coming. Shifting, swirling forces in the upper stratosphere bring another flowering season to an end, and with it a signal to one extraordinary little bird to begin one of the greatest journeys in the natural world. Almost 4000 miles, the Sonoran desert and both the Rocky and Sierra Nevada mountain ranges separate this tiny traveller from its destination, but this trip must be completed twice a year if it is to breed. A little over 9 cm long and weighing just three and a half grams, the rufous hummingbird (Selasphorus rufus) is about to embark on the longest migration, relative to its size, of any bird in the world. 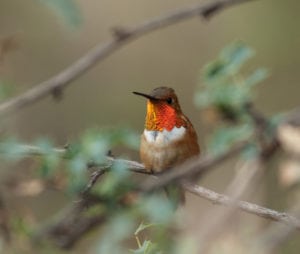 There are five aspects that make this such an astonishing undertaking. The first is simply the distance – 4000 miles one way, an 8000 mile round trip.That is a distance more than twice the length of India. To drive that distance averaging 60 mph would take more than five days. Even to travel by jumbo jet would require a ten hour flight*1! For the hummingbird this amounts to 78,470,000 body lengths. For a human to cover an equivalent distance, would mean walking around the circumference of the earth more than 3 times.

This is all amazing enough, but it is made all the more so if we consider the 2nd astonishing fact – the energy required to live life as a hummingbird. When hovering it must beat its wings 52-62 times per second, and at this time have the highest metabolic rate of any vertebrate. This means that they are never more than 20 minutes from starvation. Truly a life on the brink. To cope with such extreme energetic demands, they possess a number of physiological and behavioural adaptations. They have big hearts for their size and their blood contains a high number of red blood cells. These traits enable them to transport enough oxygen round the body as efficiently as possible. Other adaptations help them conserve energy. Fat, which yields more energy compared to carbohydrates, is burned during migration. Fat is also burned while resting, but when feeding the birds switch to burning carbohydrates. This keeps fat stores in reserve and avoids the need to use energy producing the fatty acids which are needed to metabolize fat. What is more – something I’m sure we can all relate to – these birds do everything possible to avoid cold toes.When they are feeding, , how far they hold their feet from their body varies with the ambient temperature. When it is particularly nippy, they keep them tucked up in their abdominal plumage, but when it is warmer, they dangle their toes in the cooling breeze. Finally, they maximize energy intake by being very fussy eaters, preferentially visiting flowers from which the nectar flows quickly, or in which sugar composition is particularly high.

Even with these adaptations, the locations this bird chooses to breed in are extraordinary. Their breeding range spans from the northern tip of California, through the mountains of British Columbia – where the altitude of nests can vary from sea level to 1,830m – right up Alaska, the most northerly latitude reached by any hummingbird.

And if they weren’t already burning enough energy, one additional trait exacerbates this even further. They have larger than average brains, and possess a range of cognitive abilities which exceed those expected for a bird of this size. This is intriguing, because brains take a lot of fueling, and storing information for any period of time requires significant energetic effort. Consequently, how species choose to allocate their energy resources, particularly when they must be so care-column Matt Creasey fully guarded as with the hummingbirds, gives us a hint to the most important factors influencing hummingbird survival. If their particular cognitive abilities didn’t confer a real advantage, they would quickly lose them.

This unexpected braininess has made rufous humming-birds the subject of much research investigating both their cognitive and physiological abilities. This research has uncovered a lot about these birds, and has revealed a web of relationships between the hummingbirds and other species which span a continent. We now know for example, that the birds are able to remember when they last visited a particular flower, avoiding ones they know will be empty and returning to those which have had time to re-fill with nectar, thus maximizing their foraging efficiency.This memory does not only retain information for short periods of time – individual hummingbirds return to the same breeding and wintering sites year after year, follow similar routes while on migration, and even appear to visit sites where good food sources have been found in previous seasons. This suggests impressive navigation and a spatial memory which is maintained between years.

These discoveries reveal a lot about what really matters to these little birds, but also pose a number of questions. Perhaps the most obvious is why do they undertake such an apparently hazardous journey at all? Surely between Mexico and Alaska there is enough suitable habitat to sustain the whole population of rufous hummingbirds? So why continue north?The answer seems to be that by reaching such isolated and difficult climes, they ensure that they have exclusive rights to the food supplies on offer, avoiding competition with other nectar feeding species.

The next question is how? What factors enable them to be successful in their undertaking? The physiological and behavioural adaptations which enable them to survive so far north are only part of the answer. After all, the final destination is only a small part of the whole astonishing journey, across a hugely varied landscape. To get a more complete understanding, we must consider the interactions between the hummingbirds and two other, apparently unconnected species. Firstly, along the length of the migration route, humans put out feeders containing sugar rich water to attract the beautiful birds. This provides an important opportunity for the tiny travellers to top up waning energy reserves, enabling them to survive the journey.The second interaction occurs as the birds reach the northern limits of their journey. Here, resident red-naped sapsuckers (Sphyrapicus nuchalis), small woodpeckers found across the upper states, move between willow and alder trees, using their strong bills to remove circles of bark, and allowing the sugar rich sap to trickle out. Hummingbirds arriving on the breeding grounds early have learnt that by following the sap-suckers, they can take advantage of this free meal when most plants are yet to begin flowering. 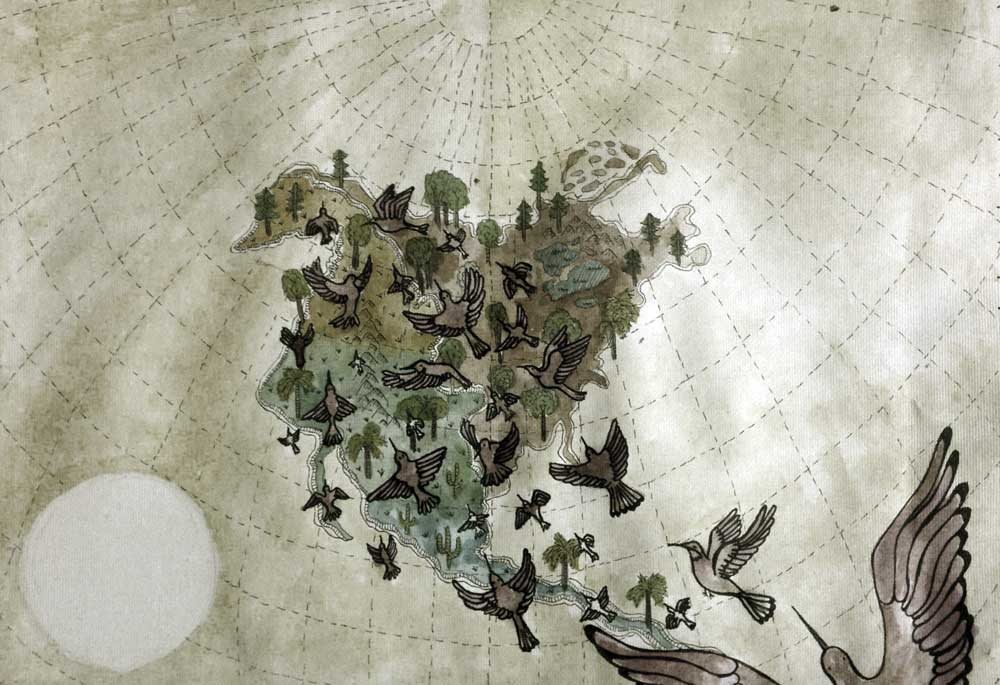 The delicacy of the balance which enables rufous hummingbirds to live is hard to imagine, and harder to predict. Scientists have revealed a great deal about this astonishing little bird, and the complex and intricate web of relationships which cross national and species boundaries and comprise the different ‘compartments’ of their lives. Yet it is still all but impossible to predict what effect small changes at a local level will have for a given species, or even more so, what cascading effects there will be throughout ecosystem

Take a moment to think about the species you see every day in your own garden, or that you passed on your journey to work or school this morning. How many of them were migratory? For those that were, what sort of lives, and what world do they experience during the times when they are away in other parts of the world? We get but a snapshot of the whole picture when we see any animal in a single setting, a single window into a life of many rooms and hidden passageways. In some ways perhaps, this is akin to imagining the people our parents were before we were born.What were their childhood dreams and aspirations? Did they come true, or fall by the wayside? What of our boss or teacher, what are they like when at home eating dinner with their family? We can never truly know someone until we understand the elements which comprise their complicated, messy, fascinating lives. In the same way, we can never truly understand the important elements of any organism’s existence until we recognize the multidimensional nature of it. Nor can we easily predict how far reaching changes to one small part will be… if your mother had argued with her parents that afternoon, if she had never attended that dance, then perhaps she may never have met your father, and you would not be here to read this now…

At present, the hummingbirds are listed by the International Union for Conservation of Nature (IUCN) as ‘of least conservation concern’. How – ever, numbers are decreasing, and the reasons for this are still unclear. Evidence from one study in Alaska has shown this species to be affected by timber harvesting, being completely lost from the study site after felling had occurred. Who would guess that felling a small stand of trees in Alaska could mean that the bird feeders at a house in Mexico remained unvisited? And what of the role that hummingbirds play as pollinators? The birds have been shown to be of critical importance in certain ecosystems, as their warm blood enables them to be active during the cold months of early spring when invertebrate pollinators are yet to emerge, thus ensuring the pollination and seed-set of early flowering plants which are important food sources for a variety of species. If hummingbird feeders are no longer put out in California, will this affect the body condition of bears in British Columbia? Think about this carefully and I am sure you will see how the answer could be yes.

We take the species we see, particularly the common ones for granted. But they live complicated lives, and we should not underestimate the far reaching effects that environmental damage at a local scale may have. Equally, we should never underestimate the power and influence we can have ourselves. Small gestures for conservation can have significant effects, and we are all part of the great web of life.

Matt Creasey is a PhD Researcher at Centre for Ecology and Conservation, University of Exeter, UK, mjsc201@exeter.ac.uk.