Asian vulture crisis – 40 million gone, but have we reached a turning point? 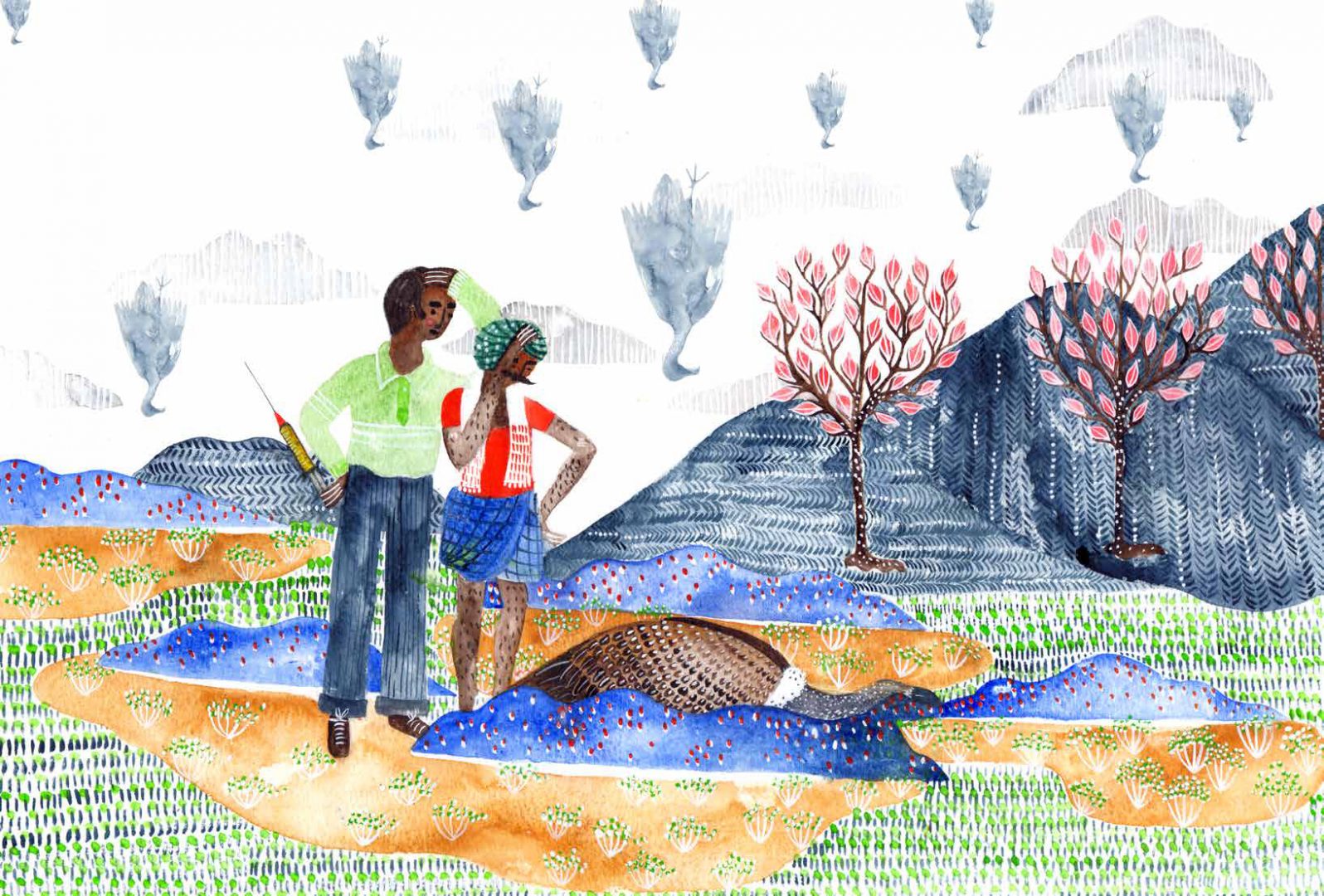 Four of South Asia’s nine vulture species are classified by the International Union for Conservation of Nature (IUCN) as ‘Critically Endangered’ – the very highest threat category short of extinction. These are the Oriental white-backed vulture, the long-billed and slender-billed vultures and the red-headed (or ‘king’) vulture. The battle continues to prevent them from disappearing altogether, and combat the major threat posed by the veterinary drugs used as a cattle painkillers, that have proved to be such catastrophic killers of vultures that consume the meat of animals treated with diclofenac. 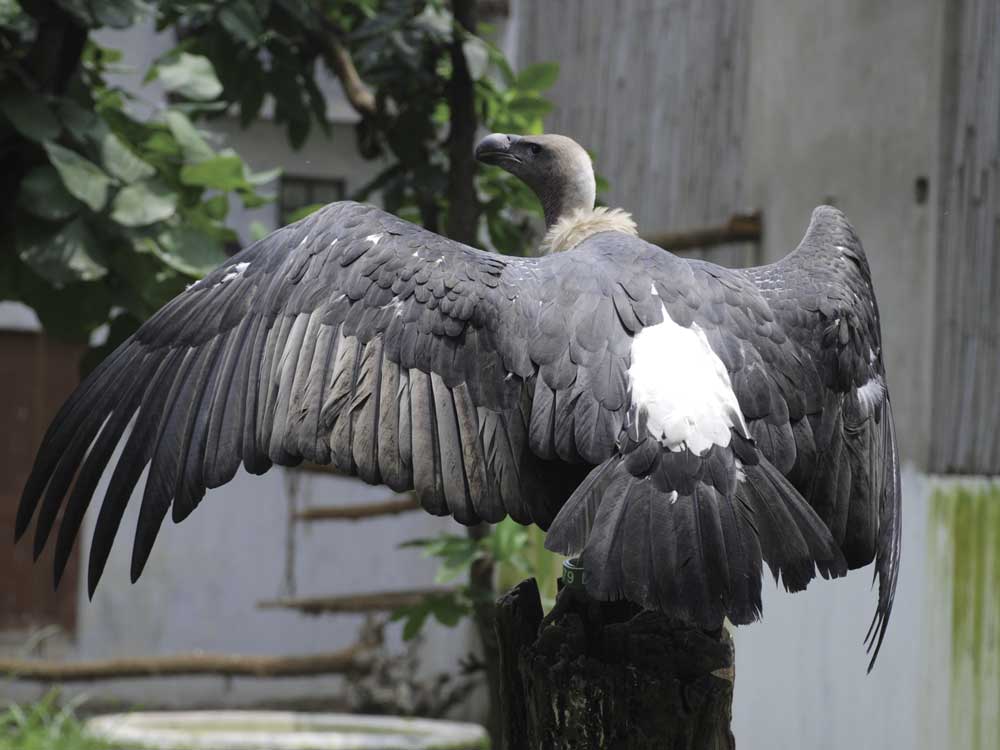 It was only in the late 1990s that anyone realised how dramatically fast vultures were disappearing, and then there was a race to track down the cause. Various theories were circulating for investigation before the true cause was identified in 2003, first in Pakistan by the Peregrine Fund team, and quickly afterwards by Bombay Natural History Society (BNHS) and partners across the rest of the subcontinent.  A common human painkiller, diclofenac (a non-steroidal anti-inflammatory drug– NSAID) which had been switched into veterinary practice on a huge scale and produced very cheaply, turns out to be extremely toxic to all vultures that consume the carcasses of animals that have been treated shortly before their death! It is a relatively safe and quick acting drug for humans and cattle, and it seemed unbelievable that such a potent drug could be used sufficiently widely to cause these dramatic declines – causing no less than 99.9% of the Oriental white-backed vulture population to disappear in barely fifteen years!

Once the main cause was clearly identified, the task to remove the drug could start, along with the need to take some birds into captivity in time to secure the populations for future release.  Various partners came forward to take up that challenge, led by BNHS and Bird Conservation Nepal, with strong support from UK’s Royal Society for the Protection of Birds (RSPB). Undoubtedly the biggest breakthrough came in 2006, when the Indian Government (the Drug Controller General of India) took the bold step to ban veterinary diclofenac formulations, making their use illegal. This step was immediately followed in Nepal and Pakistan, and in 2010 in Bangladesh. The fact that at least one alternative drug, meloxicam, was safety-tested on vultures and other species, and found to be a safe alternative was a key element in the willingness of the governments to take this important step so quickly.

Nine thousand km of repeated road-transect and other vulture surveys across India, Nepal and Pakistan showed that the population declines had significantly slowed by 2011 (Chaudhry et al. 2012, Prakash et al. 2012), and heralded what we still hope will prove to be the turning point. There were even hints of the very first signs of localised recovery in some areas, although a further repeat of these surveys this year will tell us more on how well founded those hopes are. The key to the slowing of population declines is the effectiveness of bans of veterinary diclofenac imposed by the governments of these countries. But having already lost the vast majority of these species in just fifteen years, will this be enough? 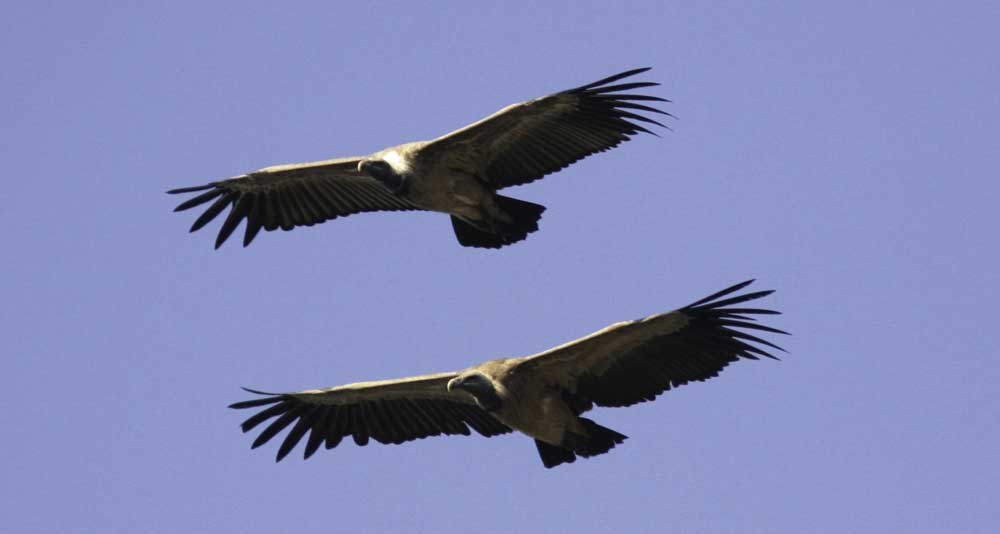 The latest information shows that the levels of diclofenac being found in dead cattle have come down quite dramatically (70% reduction by 2010; Cuthbert et al. 2014). But although diclofenac use in cattle (the main food of these vultures) has almost certainly fallen further since then, the usage today is still sufficient to exterminate vulture populations (Green et al. 2006). These unacceptable levels are undoubtedly due to the illegal use of diclofenac formulations designed for humans. Although diclofenac is used extensively for humans, the dose of 2-3ml is all that is required for people, but larger 30ml vials have been marketed which make it all too convenient and cheap for illegal use in veterinary doses. BNHS and some Ministry officials have been seeking to ban these large ‘multi-dose’ vials for human use for several years, and in July 2015 this ban has happened in India, and is a further welcome breakthrough which should significantly improve the chances for the vultures.

Meloxicam is still the only comparable alternative known to be safe for vultures and the good news is that more manufacturers (now over 70 in India alone) are producing it. Fortunately, it is also out of patent, so any company can take up its manufacture. And a further positive is that the German company Boehringer Ingelheim, which originally developed meloxicam, has released their patent of the formulation for India to further encourage companies to produce it in an effective form.

Just when it seems that the future for vultures is looking a lot brighter, we have learnt of a growing serious worry: there are other drugs (NSAIDs) apart from meloxicam that are taking the place of diclofenac, and we know that some of these are also toxic to vultures. One is aceclofenac, which is a ‘pro-drug’ which is immediately metabolised into diclofenac in the cow, and so is clearly a threat. Others such as ketoprofen, and now we know, nimesulide are already known to be unsafe for vultures, and are picking up in veterinary pharmaceutical markets and practice. Trying to get all such drugs banned will be important, but instead, (and far preferable) there is a need for safety-testing on vultures of any such drugs, before they are introduced to the market. This option has already been agreed upon, together with protocols by the Indian Veterinary Research Institute, but this urgently needs funding and to be put in place before these other drugs gain popularity with the vets. 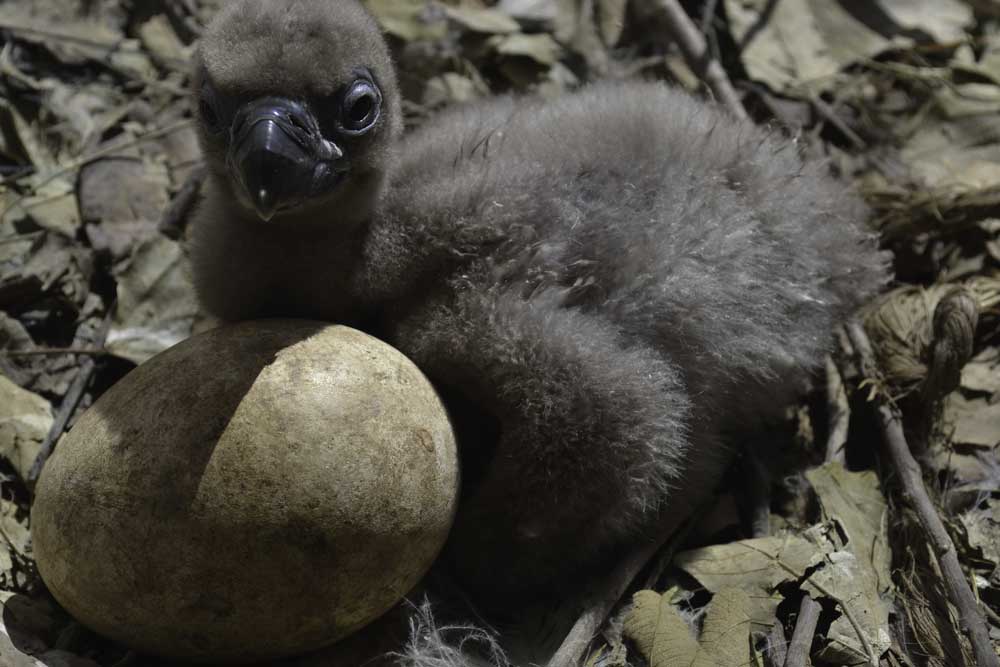 Removing the first egg to an incubator induces the birds to lay again, and the chick can then be given back to the parents while removing the second egg for hand-rearing

To ensure conservation measures are taken seriously on the ground, on a scale that can really save the vultures, the ‘Vulture Safe Zone’ (VSZ) programme has been developed, working in huge areas within a 100 km radius of important vulture breeding colonies, where intensive advocacy and awareness work is carried out by dedicated teams. The VSZ approach was originally developed in Nepal and involves a range of advocacy and awareness measures, in collaboration with state Government officials, particularly with veterinarians and drug distributors etc. It is now being taken up more widely in South Asia, with programmes led by BNHS in four Indian states and other independent Indian initiatives replicating the approach more widely. Two new VSZ projects are underway, run by IUCN Bangladesh and the Bangladesh Forest Department and coordinated by the Bangladesh National Vulture Steering Committee. It is hoped that the VSZ work alongside the other national advocacy efforts will allow the first pilot releases of birds back to the wild to take place as early as 2016.

Meanwhile, the conservation breeding programme for these species has been established mainly in India as a precaution against total extinction in case these drugs cannot be removed in time and for future reintroduction work. This has been making major headway recently, with support from State Forest Departments particularly of Haryana, West Bengal, Assam and Madhya Pradesh. The total number of birds fledged at the first three Indian centres has already exceeded 180 for all three Critically Endangered Gyps species combined since 2008, with a record 58 produced in 2015 alone. There was also the first successful fledging of a Oriental white-backed vulture Gyps bengalensis in Nepal in 2014—from the birds held at the Kasara centre, Chitwan. A number of other milestones have also been passed in India recently, including all three species being successfully reared by artificial incubation. There was another first in 2014 when four pairs had their first egg removed and artificially incubated to hatching, prompting them to then lay a second egg, which was in turn swapped with the chick from the incubator. This has been successfully replicated on a larger scale in 2015. The parents then successfully reared the first chick, whilst the second egg was artificially incubated and then successfully hand-reared. One further achievement in 2014 was that ‘Phoenix’, one of the first two Gyps bengalensis fledglings from Pinjore, Haryana from 2008, herself reared chicks for the first time. 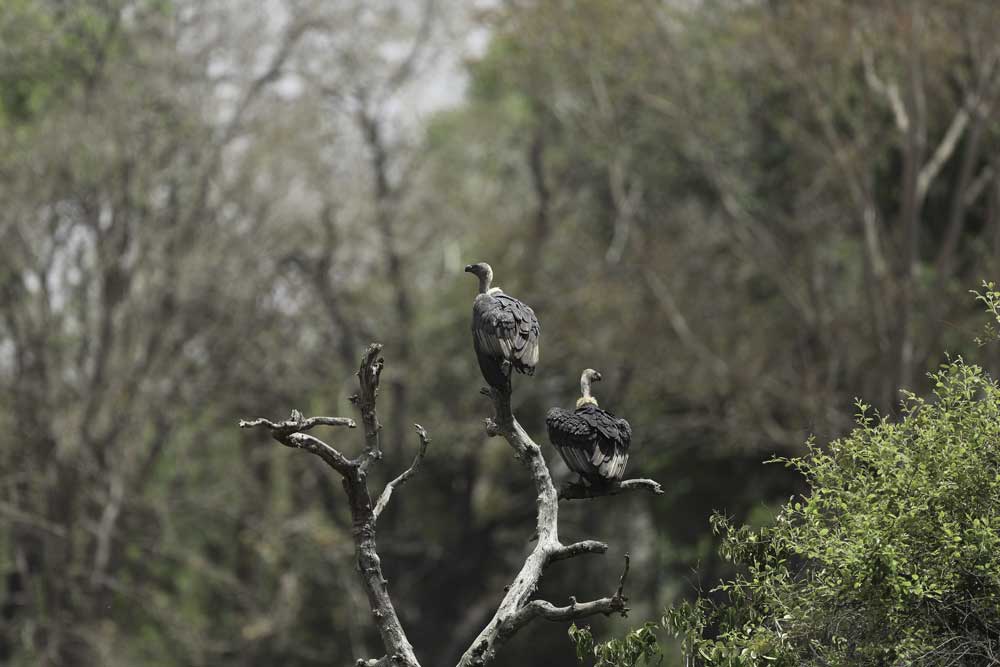 Progress, so far, has been possible through the concerted efforts of several partners all in close liaison with the Governments. They came together under the umbrella and banner of ‘Saving Asia’s Vultures from Extinction’ (SAVE), which was formalised in February 2011 and has now expanded to include fourteen full partners (a mix of national and international NGOs and Government institutions). The partners meet annually and review the necessary priorities. They took an important further step by developing and updating the February 2014 ‘Blueprint for the Recovery of South Asia’s Critically Endangered Gyps Vultures’ (downloadable from www.savevultures.org) which maps out the actions to 2025 for Bangladesh, Cambodia, India, Nepal and Pakistan. SAVE updates the conservation priorities for these species annually and provides a transparent and widely respected identity for these scientifically backed actions to gain credibility and hopefully attract the resources required to conserve the three Critically Endangered Asian Gyps vultures.

One new spectre has recently emerged more prominently for vultures in the region. This is the problem of people deliberately poisoning animal carcasses to target either large carnivores such as leopards, or probably more often feral dogs that have themselves increased in the absence of vultures (and thereby increasing the problems of dog bites, dog attacks and very significantly – rabies!), but unfortunately these poisoned carcasses often inadvertently kill remaining vultures. 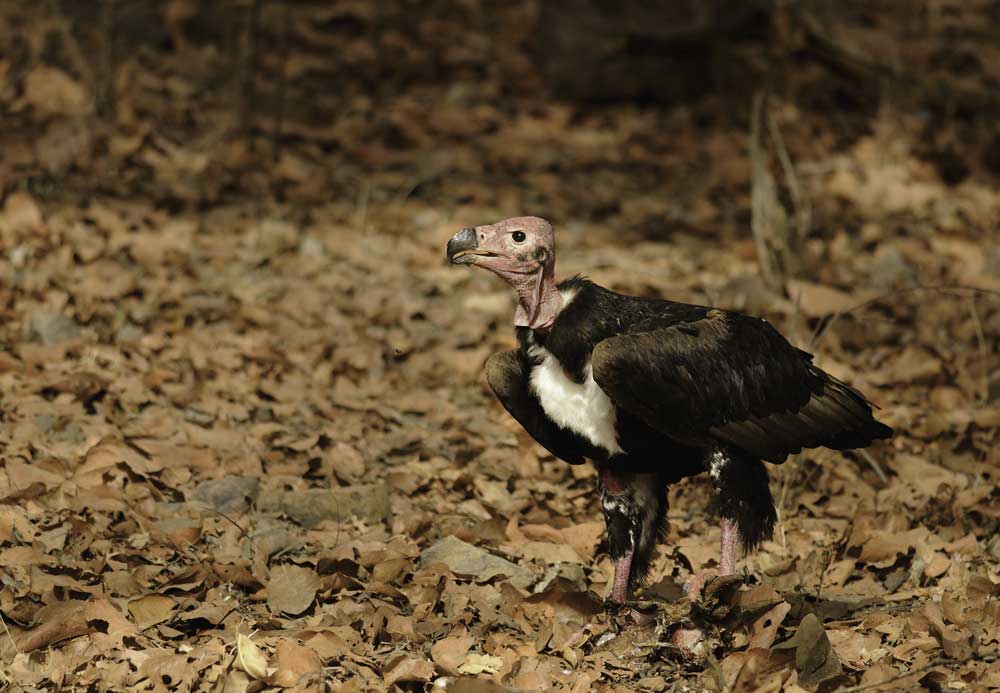 Major efforts are urgently needed across South Asia to address the immediate and increasing gap in funding for vulture conservation, which is now jeopardising the whole programme. These efforts will need to include charitable and corporate support from industry from within the region, as surprisingly, the main resources so far have come from UK charity Royal Society for the Protection of Birds as well as other external sources that SAVE Partners have managed to engage. But even more crucially, only if the restrictions and this safetytesting regime for these lethal veterinary drugs are taken seriously by Governments in time to prevent replacement drugs becoming popular with veterinarians, can we save these majestic species – the environmental cleaners – from extinction.