Conservation problems are typically complex, uncertain, multi-scale and affect multiple actors and agencies. This demands transparent decision-making that is flexible to changing circumstances and embraces a diversity of knowledge and values. To achieve this, stakeholder participation is increasingly being sought and embedded into environmental decision-making processes, from local to international scales. However, involving people in decisions is inevitably time- consuming and costly – and it may not work. History is littered with examples of failed attempts to work with stakeholders. Old conflicts have been re-ignited, and dominant groups and individuals have been given the power to de-rail or bias outcomes. So why are so many conservationists still interested in participatory approaches?

First of all, whether it works or not, there is a strong argument that we should give those who are affected by, or who can affect, proposals to develop the uplands a chance to have their say. Increasingly this is a right that is being enshrined in law. The Aarhus Convention stipulates that all environmental decisions must involve stakeholders. Local communities are now being involved in environmental decision-making across Europe as River Basin Management Plans are developed in collaboration with stakeholders to reach water quality targets under the Water Framework Directive.

But proponents of participatory approaches argue that there are also many pragmatic benefits to be gained from working with stakeholders. They argue that the reason why stakeholder engagement has sometimes failed in the past is that people haven’t done it right. Poor engagement may be more damaging than none at all. But to what extent are these claims supported by evidence? There is now empirical evidence showing that environmental decisions that were taken in collaboration with stakeholder were higher quality and more durable. Decision quality can be higher because decision-makers can access a wider range of often higher quality information upon which to base decisions, rather than relying solely on text-book answers from researchers. By getting a more complete picture in this way, unintended consequences may be anticipated and avoided. The long-term durability of decisions can be enhanced through participation because the design of interventions, projects and technologies can be more effectively adapted to local circumstances, needs and priorities.

Although empirical evidence has yet to be collected, many other benefits have been claimed. For example, by establishing common ground and trust between participants and learning to appreciate the legitimacy of each others’ viewpoints, participatory processes may have the capacity to transform adversarial relationships and find new ways for participants to work together. This may lead to a sense of ownership over the process and outcomes. If this is shared by a broad coalition of stakeholders, long-term support and active implementation of decisions may be enhanced. Depending on the nature of the initiative, this may significantly reduce implementation costs. Surely even if a few of these additional benefits can be realised, it is worth trying to engage stakeholders in conservation?

But participation is more than either of these metaphors can describe. It is an approach that values and attempts to reconcile multiple (often differing) perspectives, to facilitate learning and progress.

There is a philosophy (some have called it a world view) underpinning stakeholder participation that emphasises empowerment, equity, trust and learning. There is a need to replace a ‘tool-kit’ approach to participation, which emphasizes selecting the relevant tools for the job, with an approach that views participation as a process. This view emphasises the people who use the tool-kit in the context of a long-term relationship where the parties develop mutual trust and respect as they learn from each other to negotiate potential solutions. 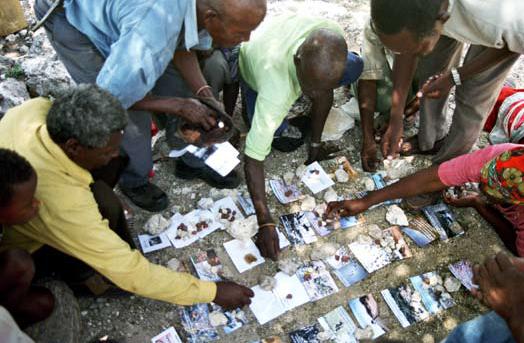 In this context, it is possible to consider best practice principles that can guide the design of effective participatory processes. Box 1 suggests 6 principles based on a Grounded Theory Analysis2 of available literature on stakeholder participation from around the world.

Although few of the claims that are made for stakeholder participation have been tested, there is evidence that it can enhance the quality of environmental decisions, possibly due to more comprehensive information inputs. However, the quality of decisions made through stakeholder participation is strongly dependant on the nature of the process leading to them. Deficiencies in this process are most commonly blamed for the failures that have led to disillusionment in stakeholder participation. Often this has arisen from a focus on the tools of participation, rather than the process within which those tools are used. However, by focusing on participation as a process, Box 1 identifies a number of best practice principles from the literature. But for these sorts of approaches to become embedded in conservation practice, stakeholder participation must be institutionalised, creating organizational cultures that can facilitate processes where goals are negotiated and outcomes are necessarily uncertain. In this light, participatory processes may seem very risky, but there is growing evidence that if well designed, these perceived risks may be well worth taking.

Stakeholder participation should be considered right from the outset, from concept development and planning, through implementation, to monitoring and evaluation of outcomes. Engagement with stakeholders as early as possible in decision-making has been frequently cited as essential if participatory processes are to lead to high quality and durable decisions. Typically, stakeholders only get involved in decision-making at the implementation phase of the project cycle, and not in earlier project identification and preparation phases. Increasingly they may also be involved in monitoring and evaluating the outcomes of the decision-making process. However, unless flexibility can be built into the project design, this can mean that stakeholders are invited to get involved in a project that is at odds with their own needs and priorities. This may make it a challenge to motivate stakeholders to engage with the decision-making process, and those who are engaged may be placed in a reactive position, where they are asked to respond to proposals that they perceive to have already have been finalised. The Sustainable Uplands Project presents one of the few documented examples of stakeholder engagement right from the development of the initial concept. This was made possible by seed- corn funding from the Rural Economy and Land Use programme where stakeholders developed a project proposal with researchers in a Scoping Study. A review of the Programme’s seed-corn funding showed that it played a crucial role in catalysing interdisciplinary collaborations to tackle complex problems, and recommended wider use of such funding mechanisms. Other researchers have shown how stakeholders could be actively engaged in sampling design, data collection and analysis, in addition to more traditional roles.

2 Make sure you’re talking to the right people

Stakeholder analysis is increasingly being used to systematically represent those relevant to environmental decision-making processes. Stakeholder analysis is a process that: (i) defines aspects of a social and natural system affected by a decision or action, (ii) identifies individuals and groups who are affected by or can affect those parts of the system (this may include non-human and non- living entities and future generations), and; (iii) prioritises these individuals and groups for involvement in the decision-making process. A wide variety of tools and approaches have been used for stakeholder analysis to: (i) identify stakeholders; (ii) differentiate between and categorise stakeholders; and (iii) investigate relationships between stakeholders.

3 Make sure you know what people want to talk about

In order to design an appropriate process using relevant tools, it is essential to clearly articulate the goals towards which the group will be working. This is closely linked to stakeholder analysis and may take place as part of such an analysis, where system boundaries and issues are identified alongside those who hold a stake in what happens to the system under investigation (Reed et al., submitted for publication). This may require negotiation, and different stakeholders may have irreconcilable objectives. If the goals are developed through dialogue (making trade-offs where necessary) between participants, they are more likely to take ownership of the process, partnership building will be more likely, and the outcomes are more likely to be more relevant to stakeholder needs and priorities, motivating their ongoing active engagement.

Participatory methods can only be chosen once the objectives of the process have been clearly articulated, a level of engagement has been identified that is appropriate to those objectives, and relevant stakeholders have been selected for inclusion in the process. For example, there are many methods that can be used to communicate (e.g. information dissemination via leaflets or the mass media, hotlines and public meetings), consult (e.g. consultation documents, opinion polls and referendums, focus groups and surveys) or participate (e.g. citizen’s juries, consensus conferences, task- forces and public meetings with voting) with stakeholders. Methods must also be adapted to the decision-making context, including socio-cultural and environmental factors. For example, methods that require participants to read or write should be avoided in groups that might include illiterate participants. The amount of time that participants are likely to give up varies between cultures, and limited time may constrain the choice of methods. Equally, the resources available may also limit this choice. Depending on the power dynamics of the group, methods may need to be employed that equalise power between participants to avoid marginalising the voices of the less powerful. There is evidence that less powerful actors who are marginalised during decision-making can delay or prevent implementation through litigation.

Don’t underestimate the power of a good facilitator to bring people together and deliver high quality outcomes. The outcome of any participatory process is far more sensitive to the manner in which it is conducted than the tools that are used. Highly skilled facilitation is particularly important in the uplands, given the high likelihood of dealing with conflict, for example between conservationists and resource users. Different facilitators can use the same tools with radically different outcomes, depending on their skill level. Such skills include technical expertise in the use of different tools. However, it is sometimes the most seemingly simple of methods, such as informal group discussion, which require the greatest expertise. A successful facilitator needs to be perceived as impartial, open to multiple perspectives and approachable. They need to be capable of maintaining positive group dynamics, handling dominating or offensive individuals, encourage participants to question assumptions and re- evaluate entrenched positions, and get the most out of reticent individuals. Such skills are difficult to learn and tend to be developed through years of experience, intuition and empathy.

The need for scientific information and analysis to inform stakeholder deliberation has been identified by many authors as an essential ingredient in any participatory process. It is argued that local stakeholders may be able to learn from scientific sources of knowledge and so make more informed decisions in highly technical decision-making contexts, for example using Citizens’ Juries. Equally, by taking local knowledge into account, researchers may have their assumptions and validity of results questioned, leading to further investigation and a more rigorous understanding of the issues they are investigating. Following from this, cross- fertilisation of ideas between these different sources of knowledge may provide more comprehensive information upon which to base decisions, which may increase their robustness and durability. Having said this, opponents argue that local knowledge may be exaggerated or distorted, and irrelevant to ‘scientific’ nature of much modern environmental management. On this basis, concerns have been expressed that integrating scientific and local knowledge bases will inevitably involve a trade-off between meaningful participation and scientific rigour. However, the same critique can be made of scientific knowledge, which should also not be uncritically accepted without evaluating the uncertainty and associated value judgments in the claims being made. If we consider local and scientific knowledge to be equally valid, it is necessary to subject each to an appropriate level of scrutiny, before considering what exactly may be integrated.

Mark Reed (m.reed@abdn.ac.uk) is Senior Lecturer at Aberdeen Centre for Environmental Sustainability and Centre for Planning and Environmental Management, School of Geosciences, University of Aberdeen.