Beyond business as usual: Why urban biodiversity indicators matter

How can we change ourselves, move beyond “business as usual”, and revert the trend of biodiversity loss in general and in urban areas in particular? Knowing the status quo and monitoring trends in your neighbourhood is one way to go about it. This is where indicators can play a role. 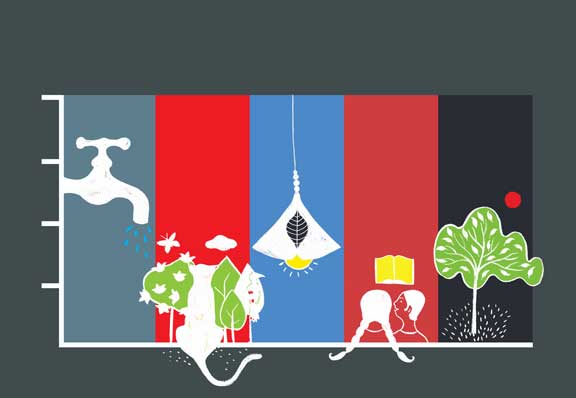 Since its development in the 1970s at the Organisation for Economic Co-operation and Development (OECD), various instruments have been development for environmental issues in the city. It started from simple indicators such as urban green areas but the limits were already clear at its early stages. Indicators were unable to deliver its performance because they were split into different categories, mostly according to the administrative units or scientific disciplines. The economic sections monitored trends of housing and energy use, while environment sections looked into green areas and water use. Ecologists monitored species abundances while school activities are analysed by pedagogics. For certain cities, economic growth was attained at the expense of environmental deterioration. Trade-offs and synergies of different aspects were not taken into consideration. There was a growing awareness that indicators should not be observed as individual numbers but more holistically, monitoring whether your city is moving towards more sustainability or not.

The City Biodiversity Index (CBI, or Singapore Index) is set of indicators to self-monitor such trends for the cities. It was developed under the framework of the Convention on Biological Diversity when the local authorities in implementing the goals of the Convention were recognised and adopted in 2008. Singapore lead the process as urban biodiversity was uniquely important for the nation mostly consisting of urban areas.

Various cities and experts joined the development and application of the index, including former hosts of the Conference of the Parties, Curitiba (Brazil, host city of COP8), Bonn (Germany, host city of COP9), and the City of Nagoya (Japan, host of COP10). The index rests on the pillars of ecology, ecosystem services, and governance.

In the book Urbanization, Biodiversity and Ecosystem Services – Challenges and Opportunities, the scientific foundation of the Cities and Biodiversity Outlook project (www.cbobook.org), published in 2013, experiences of applying the CBI in different contexts are reviewed and lessons are shared. Besides the technical or terminological difficulties for measuring or definitions, a number of cities expressed difficulties in monitoring ecosystem services and their indicators. Unlike compiling number of endemic species, where datasets are mostly available in existing institutions, setting baselines for ecosystem services were causing difficulties. In some cases, there were no available ready-made data sets for e.g., costs of water purifications, or carbon storage.

These “difficulties” can be constructive if it can shake up the “business as usual” mindsets. The purpose of indicators is not development or the application per se. It can easily become a routine if ready-made datasets are applied. The development of process indicators can be instrumental in promoting dialogues amongst administrative units to create datasets. In order to monitor ecosystem services, environmental sections will need to talk to construction sections. Ecologists will need to discuss with economists or other social scientists. By doing so, these indexes will promote reflexive thinking for policy makers and scientists. Experience of Japanese cities showed on a diverse range of green coverage and species richness. Osaka and Kawasaki were relatively grey for example. The range of “greenness” of Japanese cities is wide, since they are formed by their individual histories and economical cycles. In contrast, governance indicators have indicated more similarity across cities. The strategy for greener cities might thus need to be attuned to individual cities with their respective starting points and, in the context of Japan, take into consideration a rapidly aging society.

In 2014, the slogan “think globally and act locally” means acting in urban parks or forests, school gardens, remaining lands amongst the skyscrapers, or farmlands adjacent to the urban areas, at least for half of the world’s population. Monitoring trends and changes in urban settings will be critically important for the future. We will not be able to address environmental problems unless the studies and tools used include nature in cities and the resource-producing areas that cities depend on. Indicators in your town matters for these purposes.

I would like to thank the CBO team and the Grants-in-Aid for Scientific Research (26360062) by MEXT, and Environment Research and Technology Development Fund (ERTDF) [Nr. 1-1303] by MoE .