Bluefin off the UK & Ireland: overexploited and endangered?

Over the late summer and autumn months, visitors to the western coasts of the British Isles might see splashing at the surface of the water. While dolphins, seals and basking sharks could often be spotted, bluefin tuna are now being increasingly reported, bursting out the water whilst feeding on shoals of small silvery fish. Bluefin tuna are one of only a handful of fish (one out of a group of 30, out of ~25,000 fish species) that are “warm blooded”, or endothermic, meaning they can exploit food-rich, but cold, regions like the northeast Atlantic. To stay warm, they need to feed often and on high quality food, such as herring, mackerel, sardines and sprat. It is this constant need to feed that brings them to the waters of the northeast Atlantic at the end of every summer and drives the frenzied feeding behaviour that make them so conspicuous.

There are three species of bluefin tuna: Pacific, Southern and Atlantic. All three species have been heavily fished for decades. The global bluefin fishery is driven by an insatiable market demand and a seemingly limitless price-tag in the Japanese sushi-sashimi market, in which bluefin tuna is the most highly-prized delicacy (a single 222kg fish fetched $1.8 million at the season opening auction in Tsukiji fish market, Japan in 2013). As a result

, all three bluefin are now listed as endangered, or critically endangered, by the World Conservation Union.

The Atlantic bluefin population is comprised of at least two separate ‘stocks’, split according to where they breed; an eastern stock that spawns in the Mediterranean Sea and a western stock that spawns in the Gulf of Mexico. This population structure is maintained by adult bluefin returning to their birthplace to spawn. In terms of their conservation, it largely comes down to fisheries management, through quota setting and trade regulation; in the Atlantic, this is done by the International Commission for the Conservation of Atlantic Tunas (ICCAT), who delineate how many fish can be caught by each fishing nation whilst monitoring and regulating international trade of Atlantic bluefin, much of which goes to Japan. Like many fisheries, the bluefin tuna fishery in the Atlantic was largely unhindered at the turn of the century, despite ICCAT being formed in the 1970s with the stated goal of “obtaining the maximum sustainable catch of tuna and tuna-like species”.

In the 1990s the fishery expanded from predominantly coastal to also include the waters of the high-seas, with the central north Atlantic and the waters off Ireland becoming an important fishing destination for longline vessels. This expansion brought higher catches and created a high-seas fishery that was particularly difficult to monitor and regulate, given the remoteness of the fishing grounds. As a result, illegal, unregulated and unreported catches (IUU) were widespread, and were consistently over quotas, which varied between 29,500- 32,000t per year after being established in 1998. For instance, work to reconstruct historical catches from Japanese import records during the 2008 Atlantic bluefin tuna ICCAT stock

assessment, showed that in 2006, the reported total catch of eastern bluefin was 31,000t, yet as much as 54,000t were imported to Japan from Atlantic fisheries. Annual catches were maintained in the region of 50-60,000t from the late nineties up to as late as 2007. Hints of a declining eastern stock led ICCAT to establish a multi-annual rebuilding program in 2006, setting out to reduce Total Allowable Catches (TACs) from 29,500t in 2007 to 25,500t in 2010, also instating a closed season for purse seiners, the abolition of spotter planes and measures to increase compliance and reduce IUU fishing.

The recovery plan quotas were revised three times after the 2008 stock assessment (2008, 2009 and 2010), which showed that the eastern stock had been fished to precariously low levels and was in danger of collapsing. Ultimately quotas were slashed and maintained in the region of 13,000t for five years (2010-2014, Fig. 1), which is a measure taken by ICCAT in line with scientific advice. In recent years, all bluefin fattening farms and EU fishing purse seine vessels have begun to use electronic catch documentation systems. These were implemented by ICCAT to detect fraud and deter IUU shipments, as well as to improve tracking of bluefin tuna catch and commerce. Such measures likely led to further reductions in IUU, and together with the reduced quotas, it is likely that from 2010-2015 eastern Atlantic bluefin tuna were fished at anywhere between a half and a third the pressure they had been under for the past two decades. These changes were made in time to take advantage of a period of favourable bluefin tuna recruitment on the spawning grounds in the Mediterranean, and it showed in the 2014 stock assessment, which hinted at a period of population growth for the eastern stock.

Figure 1: Catch quotas set by the International Commission for the conservation of Atlantic Tuna since 1999. Red asterisks denote years with stock assessment

The nuts and bolts of the stock assessment process are time-series of catch rates (indices of catch per unit effort (CPUE)), and for the purposes of the assessments – higher CPUEs are assumed to be indicative of more fish (not changes in the geographic distribution). One of the

longest, and most robust CPUE indices, is that of the Japanese distant-seas longline fleet. This fleet operates throughout the open Atlantic, and seasonally in the high latitude waters of the northeast Atlantic, up to 60°N. Our research has shown that the mean annual CPUE in this fishery has risen by up to as much as 300% of the long-term annual mean (1991-2015) since 2010. This increase in catch rate has coincided with a marked contraction of fishing effort (in both hooks and spatial coverage), and broad-scale oceanographic change in the northeast Atlantic. There may well be more fish in the northeast Atlantic, but it might be hasty to assume that this is solely because there are more fish in total, and it is more likely that multiple factors are acting in concert.

Ocean physical processes, including temperature and currents, oscillate on multiple different time scales; over years and decades. These long-term changes have been shown to affect the distribution of marine species both physiologically (i.e. too warm/cold) and through resource availability (i.e. enough forage fish for bluefin). If CPUEs are to be continually used as an estimate of real abundance, then consideration must be given to other factors that affect bluefin tuna distribution. Instead of assuming there are simply more fish, our work is asking the question: “What other factors might affect Atlantic bluefin tuna catch rates?”. In answering this question, we hope to further the conservation of Atlantic bluefin, by shedding light on how the ocean physically influences their distribution in the Atlantic.

To further complicate matters, it is unclear whether the fish that comprise the seasonal aggregation in the northeast Atlantic, belong to the Mediterranean (eastern) or the Gulf of Mexico (western) stock. Early work by Prof. Barbara Block and Dr Mike Stokesbury (Tag-a-Giant foundation of Stanford University; TAG) hinted that the northeast Atlantic could be a “meet and eat” for fish from both the Mediterranean and Gulf of Mexico stocks (Fig. 2). These ‘mixing’ regions are of particular importance for conservation and management, as currently all fish caught east of the 45°W meridian (Fig. 2) are deemed to be Mediterranean breeders, or eastern stock fish. Individuals from the two stocks of bluefin differ very little in their appearance, but considerably in their sizes and biological traits; the Gulf of Mexico breeding stock is only a 20th the size of the Mediterranean stock and the fish are thought to mature much later (around 12 years old as opposed to as early as 4 years old in the Mediterranean). This means that the western stock is far more vulnerable to overexploitation, and consequently has remained at about 17% of historical levels for several decades without recovery (in 2011 the eastern stock was estimated at 33% of historical levels). Hence, understanding the movement ecology of Atlantic bluefin tuna is another vital step to be able to monitor stock-specific fishing pressures. 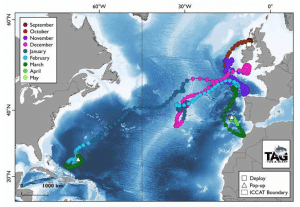 In 2014 and 2016 the University of Exeter, in collaboration with TAG, the Centre for Environment Fisheries and Aquaculture Science, Marine Science Scotland and the Irish Marine Institute, re-ignited efforts to track bluefin tuna from the coasts of the UK and Ireland on their spawning, and return migrations. At present 19 bluefin tuna have been fitted with sophisticated tracking technology that monitors not only their movements, but both diving behaviour and the external temperatures that they experience. By using novel algorithms designed to pick out spawning behaviour from how the fish behaves in the water column we also hope to be able to pinpoint exactly where these fish spawn, whether in the Gulf of Mexico or the Mediterranean. By defining precisely where these fish spawn we can test whether current management measures, such as closed areas and seasons, for purse seiners in the Mediterranean are effective. Such methods have been used in the Gulf of Mexico, and resulted in Final Amendment 7 to the 2006 Consolidated Atlantic Highly Migratory Species Fishery Management Plan (NOAA). This amendment put regulations in place to reduce adult bluefin catches on pelagic longlines in the Gulf of Mexico, based on tracking data and the use of novel spawning detection algorithms. This is yet to be done for the Mediterranean. 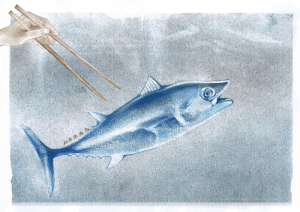 nd and the UK lack the quota to fish bluefin tuna. So, for the bluefin that have suddenly returned to the UK and Ireland, these coastal waters act as a form of protected area for the time being. However, as is made evident by our recent work, bluefin tuna found off the British Isles have probably visited waters where they can be legally fished, in countries such as; Spain, France, Italy, Canada, North Carolina and Morocco, and the waters of the high seas (where the Japanese longline fleet operate). Efforts should be continually made to track bluefin and their fishermen adversaries to monitor the pressures that they face throughout their distribution. The recent reappearance of bluefin tuna in coastal waters of the British Isles, for whatever reason, highlights the incredibly dynamic nature of these ‘superfish’ and the fact that we still have plenty to learn. Taken together, the outlook for bluefin tuna seems to be fair, although, a better understanding of their ecology in the high-latitude North Atlantic is much needed. The data collected from our research efforts will form the basis to beginning to understand why we might be seeing more bluefin in our waters, and will hopefully aid in the management and conservation of these remarkable predators in the future.

Tom Horton is a post graduate research student at the University of Exeter.