Monday, 26 November 2018 was catastrophe and carnage. When temperatures spiked from 36C to over 43C, Spectacled Flying-Foxes (Pteropus conspicillatus) plummeted from canopy heights to forest floors, carpeting leaf litter with carcasses. We arrived before the nightly fly-out unsure of what we would find.  Though history had yet to record the effects of climate change on this Far North Queensland species, knowledge of heat stress events in their southern cousins–the Grey-Headed Flying-Fox (Pteropus poliocephalus)–stifled hope for moderate loss.  As the sun set we watched as around thirty flying-foxes departed their roost to seek hydration from nectar and fruits. The black specks vanished into a dusky horizon that should have been peppered with bats.

Night descended and malodorous fumes settled in a forest thick with the screams of babies calling for mothers that would never again groom and suckle young.  Trailing lianas and a thick, thorny forest understory flouted the beams of our torches as we attempted to trace the echoing cries of the new orphans. We found as many as darkness would allow, some gasping their last breaths.  As we searched, tripping over bodies, we found young adults weakly hanging against trunks of their towering roost trees, glazed eyes unblinking as we attempted to unhook their claws from thorny vines.

Over the next 5 days our small team of volunteer flying-fox carers and rescue workers would collect almost 12,000 corpses and 351 live bats. We worked in heat reaching up to 45C, perhaps even hotter inside the 6-acre stretch forest.  Death clung to every branch. In the forest centre we found the trunks of the tallest trees encircled by layer upon layer of dead bats, sometimes nearly 30cm deep. Even after 3 days of desiccation and rot we still found live young half-buried in the decomposing piles. As we scoured the forest for the live, we packed the dead into bag after bag.  When we ran out of bags, we counted the scattered bodies into piles. With no options for disposal we left the bodies to stew and rot in the viscous heat. By Day 6 the forest was silent except for the constant hum of thousands of flies, still but for the wriggling of hundreds of thousands of maggots.

Spectacled Flying-Foxes are a keystone species in Queensland’s tropical ecosystems.  These bats are pollinators of a variety of native flowering trees and shrubs and have a long evolutionary history as primary seed dispersers of the fruiting trees that comprise Australia’s northern rain forests.  This region encompasses the Wet Tropics World Heritage Site, a major biodiversity hotspot. Without the flying-foxes the rain forest will lose a key player responsible for forest regeneration and growth. 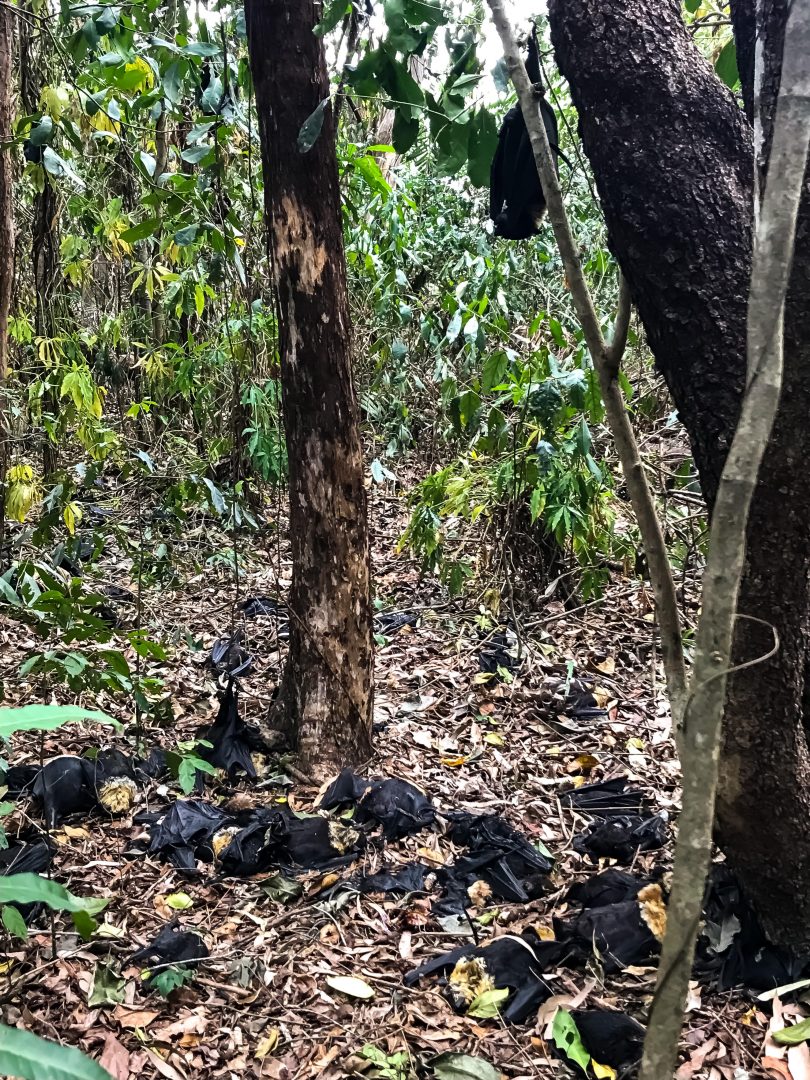 Heat events such as this occur yearly in Australia and seem to be occurring with increasing frequency and severity.  Due to mass die-offs, the effects are more evident in species like flying-foxes; however they threaten more than just bats.  During the same event that withered the forests of Queensland, birds dropped from their perches and small mammals expired beside dried riverbeds.

This is climate change in action.  Skeptics point to geological history and the uneven distribution of climate change effects to argue that the changes we see are part of a natural cycle of the Earth’s physical environment.  While such changes do occur, the scope and severity of what we currently face are unprecedented, outside of mass catastrophes such as extinction-generating meteorites and volcanic eruptions.

Usually we talk about climate change in terms of prevention.  However events such as Far North Queensland’s first extreme heat event reveal that the time for prevention has already passed us by.  In order to protect species and delicate ecosystems we must shift our attention from preventing temperature increases to addressing the immediate challenges climate change has already laid at our feet.  This includes finding novel ways to protect and preserve Earth’s biodiversity given that climate change is already altering the habitats and behaviours of organisms across the globe.

In a few hot days we lost at least one third of the Spectacled Flying-Fox population.  That week, as roosts vanished, we watched as local governments struggled to respond and trained animal rescue workers tried to cope with the scope of the crisis.

None of us at Edmonton was prepared to for the true face of global climate change: carnage. We witnessed the decimation of a colony estimated to have contained around 13-14,000 flying-foxes before the event.  Of that number we were able to save 351 or less than 3%. In order to conserve the remainder of the species we will have to find ways of actively protecting the animals from future heat event effects. If these 12,000+ deaths can teach us anything, it is that we need to stop focusing on prevention and start examining how we can proactively support ecosystems and wildlife that are going to face extreme climate events with increasing frequency and severity.