Born with a killer instinct 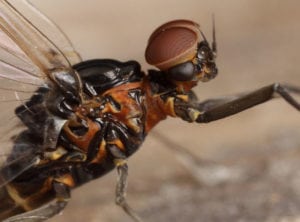 Mayflies or shadflies are aquatic insects that belong to the order Ephemeroptera (in Greek ephemeros means short-lived and pteron means wing). Adults have a very short lifespan ranging from few minutes to few days while the immature stage, called nymphs, can last upto a year in fresh water.

Mayflies are native to Ireland, in some parts where a species of amphipod crustacean, nicknamed Gamma (because its real name, Gammarus pulex, is clearly too long), has recently earned the reputation of a ruthless invader. Scientists know that adult Gamma feed on the young of mayflies, nymphs. But do young Gamma also feed on nymphs? If they do, it might be bad news for the mayflies, a ‘double whammy’, as the authors of this study put it.

Jaimie Dick and colleagues from Queen’s University, Ireland, collected small, medium and large (young, juvenile and adult) Gamma and examined gut content. Much to their surprise the scientists found that all Gammas ate mayfly nymphs, providing no time for the latter’s growth and development. The largest Gamma ate the smallest nymph even. Another ominous fact, Gamma can occur in great densities, up to 3000 per square metre, when compared to declining numbers of the mayfly.

The effects of a predator, especially a non-native one, on the community of animals and plants it interacts with, have been long studied. However, it is usually restricted to adult predators. In order to understand and predict an impact before it occurs, one must know a predator’s behaviour throughout its lifetime. This study highlights the possibility of larger effects of a predator and calls for looking at other known potential invaders, from this angle too.