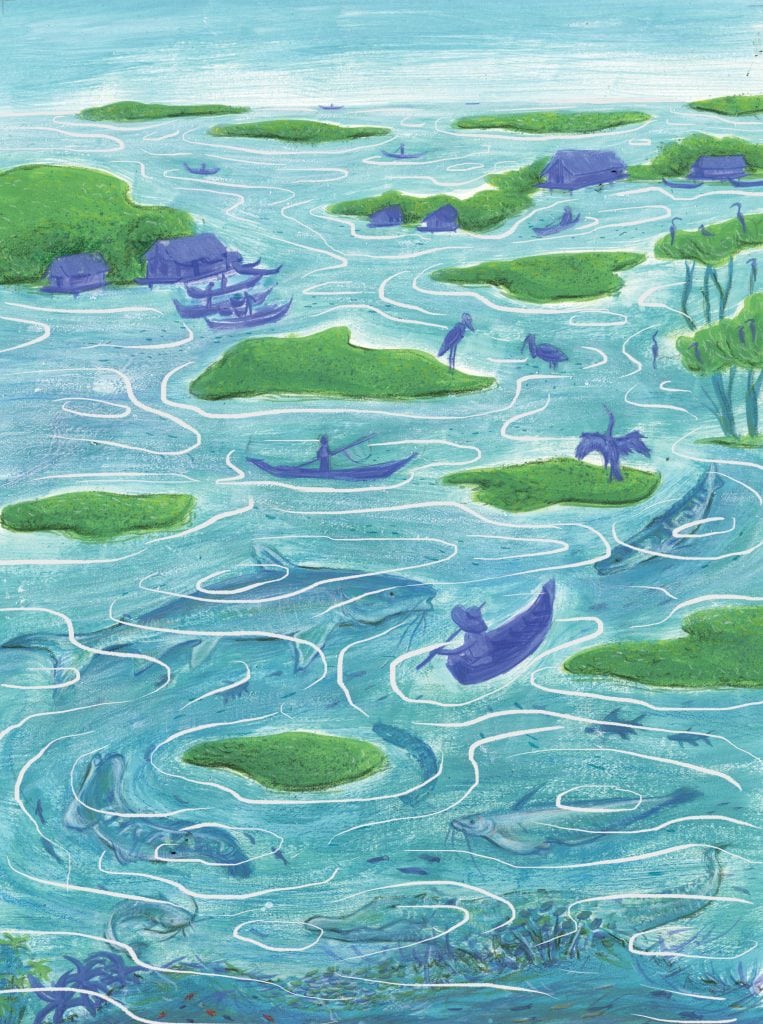 Cambodia’s vast aquatic milieu is part of the larger Mekong River Basin and its fertile floodplains.  At the heart of this area is the Tonle Sap Lake– the largest freshwater lake in South-East Asia and the most productive and bio-diverse freshwater zone in the world.

The Tonle Sap River flows out from the Lake and joins the Mekong at Phnom Penh the capital of Cambodia. During the peak flooding season from June to September the seasonal monsoon causes the Mekong and its tributaries to spill out of their channels.

The flooding is so heavy that the flow of the Tonle Sap River is reversed back into the lake inundating huge areas of forest and grassland across the country.  When this happens, the Tonle Sap — now designated a UNESCO Biosphere Reserve – grows from about 2500km² to cover over 16,000 km² or about 7 per cent of Cambodia’s land area.

Tonle Sap teems with fish that nourishes Cambodia’s population making them who are the world’s largest consumers of inland fish. In 1873 the French Protectorate introduced tenure rights to the most productive parts of the Lake by auctioning licenses to individuals to erect fish enclosures called ‘fishing lots’ over vast areas of the lake.

The Tonle Sap was also mute witness to the genocide of the Pol Pot regime in the 1970s. The populations around the Lake were uprooted and scattered far and wide to realise his dream of making a communist state, based exclusively on a rice growing proletariat subsisting on state welfare. Many Vietnamese fishers and Khmer farmers who were educated and fishing lot owners were killed for fear that they would rise against the state.  Fishing came to a standstill.

The Pol Pot vicious regime was defeated in 1978. Cambodia slowly returned to the democratic mainstream in 1993 only after over a decade of ‘socialist’ rule. The fishing lots gradually reappeared and their auctioning by the state was revived as it did form sizeable revenue – between USD 2 and 3 million per annum. Fishing lot owners became a rich and privileged group. Many former military men also got involved. They jealously protected the lots from ingress by the large displaced Khmer peasant population who settled around the Lake after Pol Pot. Conflict over access to fish became endemic. Many deaths were reported.

This situation was altered drastically in October 2000. Cambodia’s Prime Minister made the an unexpected announcement cancelling half of all fishing lot licenses, including those belonging to of a few hundred powerful individuals. He turned over the rights of access to thousands of poor rural families to harvest fishery resources for food and livelihood. It was an action which yielded important political rewards for the Prime Minister in the next elections in 2003.

This was a state-sponsored aquarian reform backed with legal protection. The Fisheries Administration (FiA) was asked to start a Community Fisheries Development Office to assist the riparian communities with setting up new community fisheries institutions (CFi). Civil society organisations and international development partners were encouraged to help out.

CFi are spatially demarcated areas of flood-pulse land and water terrains. This realm is first roughly charted out by a group of founders. Concrete boundary markers are placed at points which are perennially under water. A democratically elected team from among the group of founders is designated as the CFi Committee. It is their task to make the CFi function as a modern riparian commons. Each CFi is encouraged to prepare their own management plan to chart out how they will utilise and conserve their common domain and its resources.

The technology of fishing lots was ecologically sound. It is just that due to the ownership pattern the overall benefits from the fishery were accruing to just a few. In the CFi the fishers only use what are designated as ‘family-scale’ fishing equipment. Basically these are nets, traps and hooks of limited size which can only harvest small quantities of fish just adequate for home consumption and sale for a little cash.

An assessment made in 2012 of the 450 CFi established by then demonstrated that the aquarian reforms resulted in a much wider spreading of the benefits gained from the huge teeming fishery resources of the Lake and also the other riverine and marine areas brought under the CFi regime.

Leading the list of benefits was the greater quantities of fish consumed by the rural population – particularly the children. Secondly, the use of the small cash incomes from sale of fish contributed to family expenditures such a children’s school books; covering minor health costs; minor repair of homes; purchase of rice in the lean season and such like. For the rural communities such small but crucial expenses madey significant differences in their lives. Knowing that all this comes from resources over which they have collective control is a great source of empowerment.

There have also been tangible improvements in the local ecosystem through the collective efforts of the CFi members to protect the flooded forests; plant mangroves; stop destructive fishing and other conservation measures. The structured role of women in the CFi committees provided new avenues to gradually bring in more gender equality in the communities. Some of the best functioning CFi are marked by the greater participation of women in them.

Noting these small but significant nutritional, economic and social benefits which widely accrued to the communities from his earlier policy pronouncements, the Prime Minister completed his reforms by taking over the remaining half of the fishing lots. Some were converted into exclusive conservation zones in the Lake, which in his words were, “to protect the lake’s pressured wild fisheries on which tens of thousands of subsistence fishermen rely.”

Today there are over 500 CFi in Cambodia. The majority are around the Tonle Sap. Their commons covers over 850,000 hectares spread across 19 of the 25 provinces of the country. There are 188,000 commoners of which over 61,000 are women. Not all the CFi in Cambodia function as ‘lively commons’. Many remain ‘empty shells’ for lack of leadership and timely support from civil society and development partners.

Yet the future is bright. The framework for a modern commons and the rich experience of 15 years of thousands of commoners is a huge social capital which can be tapped with the right facilitation and support. The riparian communities and the Royal Government of Cambodia are committed to this.

John Kurien is currenty Visiting Professor at Azim Premji University, Bengaluru. He has been associated with Cambodia’s community fisheries initiative since 2005.