Mammals are key components in ecosystems acting as grazers, predators, and seed dispersers, and providing important benefits to humans, such as food, and recreation. Despite that, mammals are also an extremely endangered group with around a quarter of extant species being considered as threatened. Mammals from the order Carnivora are likely to come into conflict with humans, especially when they prey upon livestock. This leads to human illegal activities (hunting, poaching, poisoning) that adversely affect their population viability. In fact, the ultimate driving force of almost all recent and ongoing declines in mammal populations and their immediate causes (habitat loss, hunting, and species invasion) is the growth of human populations; hence species inhabiting more heavily impacted regions are at higher extinction risks.

However, species respond differently to human threats and several factors can influence such responses. It is known that extinction risk in mammals can be driven both by environmental factors (habitat loss, climate change) and intrinsic biological traits of the species (gestation length, body size, population density). Moreover, small and large species have different probabilities of extinction given that smaller species are primarily affected by environmental factors (including human impacts), whereas larger species are also constrained by their intrinsic traits.  Some species of carnivores, for instance, are likely to move more rapidly towards extinction than others, as a result of synergistic effects of their own biology and threats posed by the increase of human population density in certain parts of the globe. Therefore, as biodiversity and threats are not homogeneously distributed around the Earth’s surface,  setting conservation priorities is unavoidable and necessarry.

Until recently, conservation planning experiments tended to attribute high importance to areas with the highes species richness and endemism, where many species are thought to be at imminent risk of extinction, or where extensive habitat loss has already taken place.  However, as species respond differently to human-driven threats,   there is a need for including biological traits into such prioritization schemes, because this would entail more ecologically-based options and flexibility for conservation planners, stakeholders and policymakers. We have recently included species evolutionary and ecological traits in different prioritization scenarios for mammals of the order Carnivora inhabiting all Latin America (the so-called  Neotropical  region)  and were able to indicate regions that are less impacted today due to human activities while harboring most very vulnerable species. These regions should, therefore, provide the best return for conservation efforts.

To do this, we first acquired data on four species biological traits, namely body size, rarity, extinction risk, and phylogenetic diversity. These traits are crucial given that they are obviously linked to the persistence of carnivore populations. In particular, the rationale for including phylogenetic diversity (a measure of a species unique evolutionary history) is that species with higher amounts of independent evolution be assigned a higher priority ranking because they retain more genetic/evolutionary information, maximizing the accumulation of conspicuous diversity. Secondly, we mapped these biological traits, and used prioritization algorithms to find optimal sets of regions capable of representing all Neotropical carnivore species in as little an area as possible.

Algorithms were constrained by biological traits so that different planning scenarios could be derived. Hence, when optimal sets were forced to include regions tending to aggregate rare large-bodied species, with high phylogenetic diversity, and under high extinction risks, a very vulnerable scenario emerged (Fig. A). On the other hand, when optimal sets included regions with large-bodied species, but that is not rare nor under high extinction risks, a species persistence scenario emerged (Fig. B). These scenarios were then compared with another representing all  carnivore  species,  but  favoring the inclusion of regions with a higher degree of protection, lower levels of original habitat loss, larger numbers of large blocks of original habitat, and
lower rates of conversion of remaining habitat, that is, a lower conservation conflict scenario (Fig. A, B). 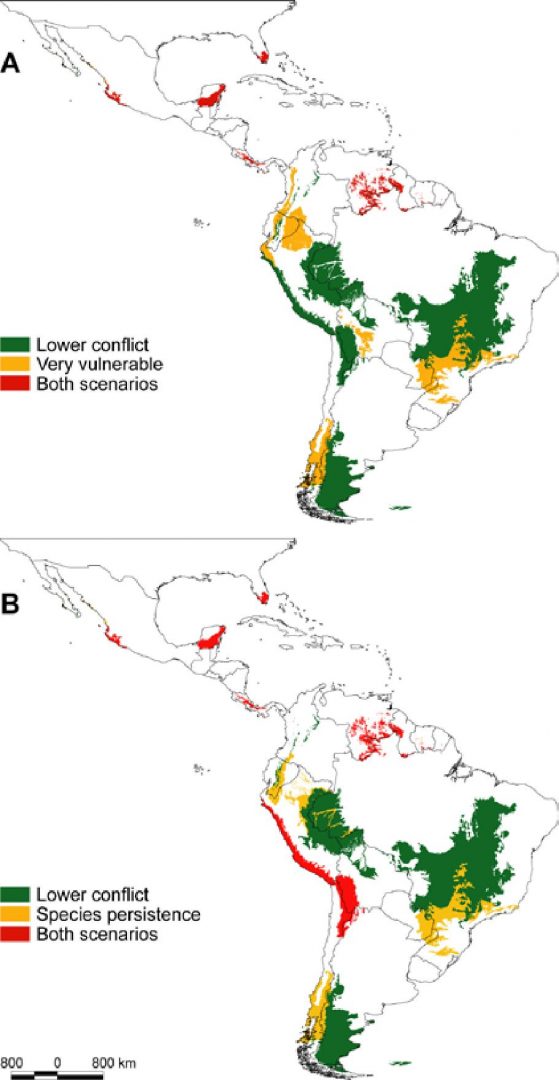 These results showed that conservation efforts for carnivores in Latin America should be concentrated in priority sets of 12–14 regions if all species are intended to be represented. The most important regions are those that occur in the optimal sets that minimize conservation conflicts, as well as those that are very vulnerable and call for urgent intervention. Conservation action in these areas is likely to yield the best return for the investment at the regional scale. The incorporation of species evolutionary and ecological traits can generate more ecologically supported priority sets and this has important implications for reserve network design. Conservation planning would benefit from the inclusion of species biological traits in optimisation
algorithms once the results would better support policy negotiations that, ultimately, are intended to maintain wild animal populations over large periods of time. This kind of approach contributes now to a joint framework for the development of national and continental strategies for carnivore biodiversity conservation. It also adds to growing efforts to establish action
plans to apply finite funds and efforts where they will be most effective.