Challenges and opportunities for nature conservation in Rio de Janeiro: Peninsula and Inhaúma 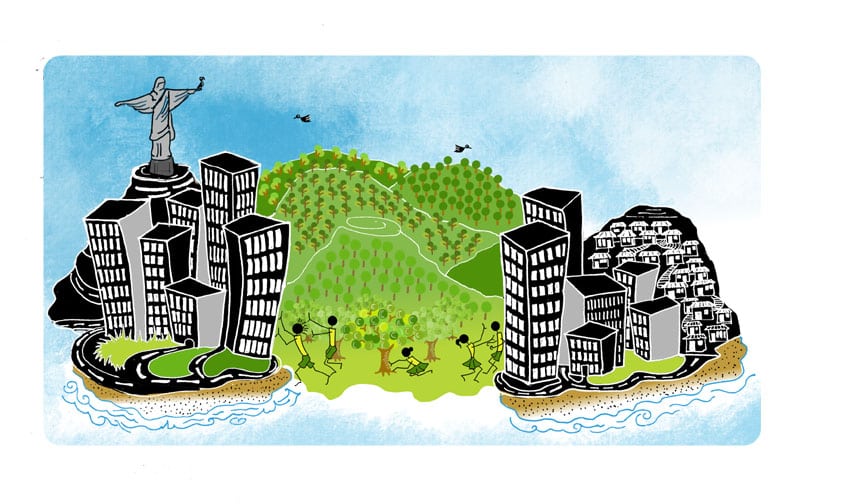 Rio de Janeiro has a history of biodiversity restoration and conservation dating from the 1800s. The area was originally covered by the Atlantic Forest complex (or Atlantic Forest senso lato), a mosaic of ecosystems including rainforest, mangroves, restinga (sandbanks), wetlands and beaches. The Atlantic Forest is one of the biodiversity hotspots of the planet but only about 11-16% of its original area remains. Urbanisation and agriculture have drastically transformed the landscape, not only by deforestation, but also by elimination of entire hills, indented to allow urban expansion along the shore and in flood-prone lowlands. Economic agricultural cycles, mainly coffee cultivation, were responsible for most of the hills’ biodiversity degradation until the 1800s. During this period the city went through a severe drought, which led to the decision to reforest the Tijuca massif in order to restore specific ecosystem services, such as fresh water supply, local climate regulation, botanical explorations, and recreation for the growing population. Today, more than 150 years later, the forest still provides numerous services and is protected as part of the Tijuca National Park. The remnants of the native ecosystems are located in private and public areas, mainly in Federal, State and Municipal Conservation Units. Forests, mangroves, and other natural ecosystems are estimated to cover about 18% of Rio’s urban area.

Urban nature is so important that the city received the UNESCO’s World Heritage Site award in 2012, as “Rio de Janeiro: Carioca Landscapes between the Mountain and the Sea”. Beaches and parks are assets that attract residents and tourists. The city is physically divided by the massifs of Tijuca and Pedra Branca. The slopes are mostly covered by restored Atlantic rainforest and exotic tree species.

Rio de Janeiro faces many challenges related to urban expansion, such as floods and landslides, increasing urban heat island effect, severe traffic congestion, and air and water pollution, among other hazards to human health. Nowadays, the expansion is sped up by public and private investment flows to promote several international events that have boosted the city’s image worldwide, mainly the 2016 Olympic Games. These investments support real estate developments over lowlands in the city’s west zone, causing radical landscape transformations that follow the historic occupation patterns of eradication of ecosystems and biodiversity, even with alterations in environmental legislation.

Despite the ongoing negative trend, tools and mechanisms that can help to support biodiversity and ecosystems in Rio do exist, as the following two examples will show. 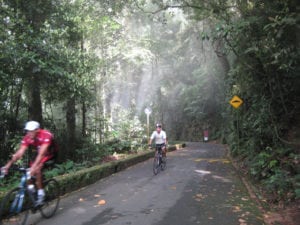 Environmental legislation was responsible for the implementation of protection and restoration of biodiversity in the late 20th Century. The most successful case is located in the Jacarepaguá lowlands—a lagoon system. In this area, a modernist urban plan designed in 1969 by the architect and urban planner Lucio Costa , envisioned the future city center in a wetland, with sprawled car-based gated communities and shopping malls along the main highways. In the plan, the lowlands were divided in glebes—large lots of land—that attracted powerful real estate investors. In the following decades, after the opening of a new road system, the occupation was fast, and led to a deep transformation of the landscape: from native ecosystems to lawns and “homogenised” ornamental gardens with few exotic species. However, the area has still today about 30% of vegetated land cover.

In order to enable the development of a strategically located 750,000 square metres residential gated community named Península, in 1986 the glebe’s owner hired Fernando Chacel, a famous ecologically oriented Brazilian landscape architect, to restore and create a 77,000 square metres ecological park on a three kilometres long lagoon-front land parcel. In this manner, the glebe´s owner could comply with the legislation and add value to his land. He foresaw a business opportunity and envisioned a park that could be a magnet for new residents in his property. He also promoted the restoration of mangroves and associated transition ecosystems in a contiguous park, Mello Barreto, and had to protect a 207,061.26 square metres in an adjacent Northern glebe. Today, residents recognise native biodiversity and adapted species as one of the main assets of their community.

Inhaúma – the bottom-up initiative of Verdejar

The northern district of Inhaúma is one of the densest and poorest areas in Rio. It has about 118 inhabitants per hectare, and only 1.6% of its territory is covered by green areas. In the late 1980’s, a resident known as “Luiz Poeta” (Poet Luiz), started to plant native tree species in one of the few non-built slopes of the region. Other residents joined him in his effort to restore the rainforest, so they could enjoy a better local climate, protection against landslides and further illegal occupation. The informal actions gave place to an active NGO: Verdejar. The transformation is remarkable: large portions of the slopes are now covered by forests, and residents that got engaged in this process started studying to be better prepared to work for enhancing their community. Their many activities combine nature restoration and conservation with local culture and arts. Local production of fruits and vegetables is another target of the organisation. It is a bottom-up approach: people value the biodiversity and the ecosystem services that the forest, agro-forestry and vegetable gardens provide. It is a successful combination of nature restoration and positive social change.

Verdejar is one of the many organisations in Rio that are engaged in social and ecological actions. Together, they have the potential to constitute an efficient network of stakeholders that can influence the political agenda. It is, however, crucial that decision makers of the city develop a deeper understanding of the role of urban biodiversity and the ecosystem services it provides, in order to promote a systemic socioecologically oriented urban planning and design. In this manner, Rio could achieve its full potential to be a real biophilic city.