Changing with the seasons

COMMUNITIES WITH CLOSE TIES TO NATURE SHOULD BE THE MOST AFFECTED BY CLIMATE CHANGE, YET THEY ADAPT QUICKLY TO THE CHANGING CONDITIONS. TENZING INGTY DOCUMENTS THEIR VAST ECOLOGICAL KNOWLEDGE AND THE WAY THEY USE THIS TO REFASHION THEIR PRACTICES. 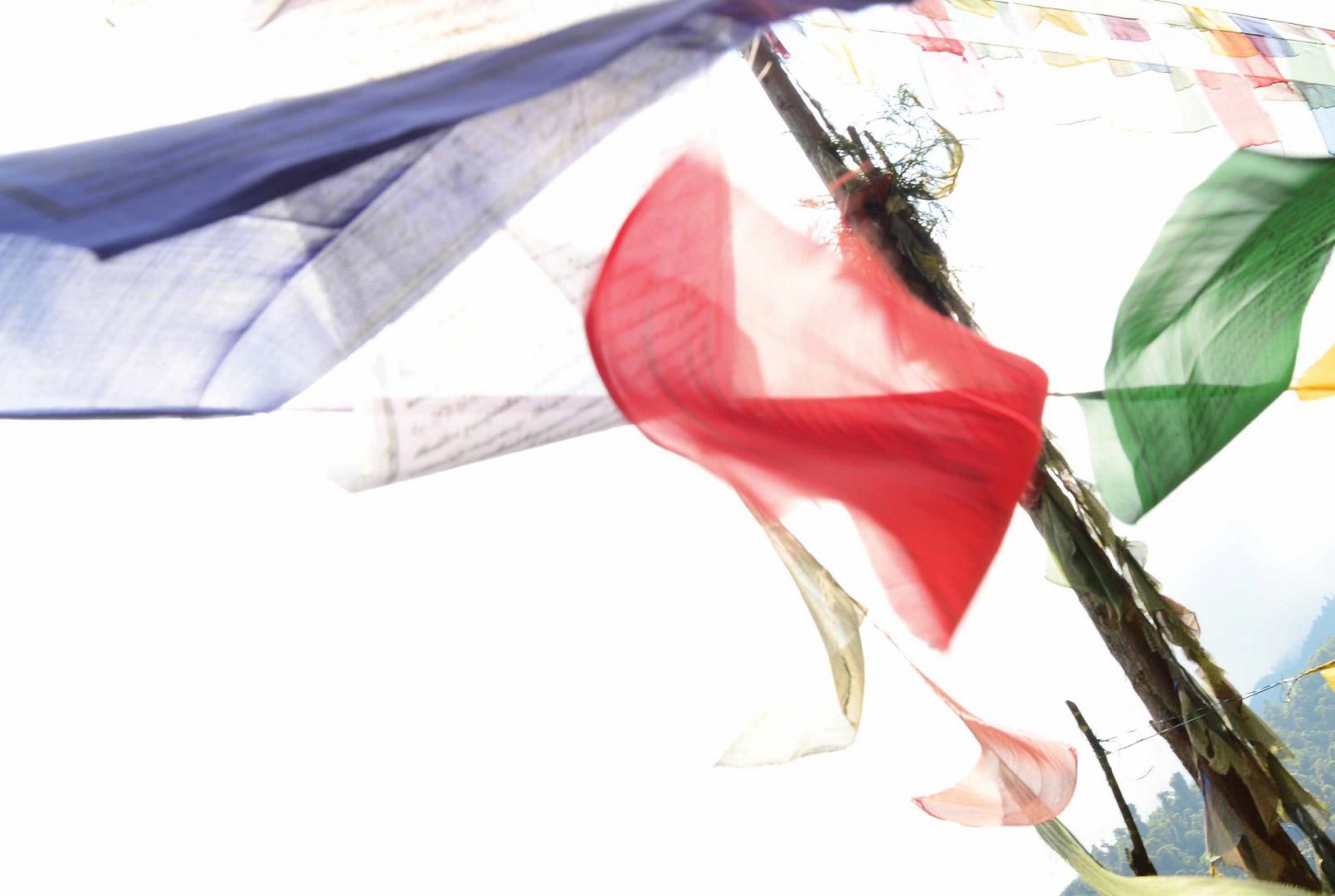 Overall warming, earlier summers, delayed monsoons and shorter winters. These are some of the very definite observations of climate change made by nomadic pastoralists of North Sikkim. 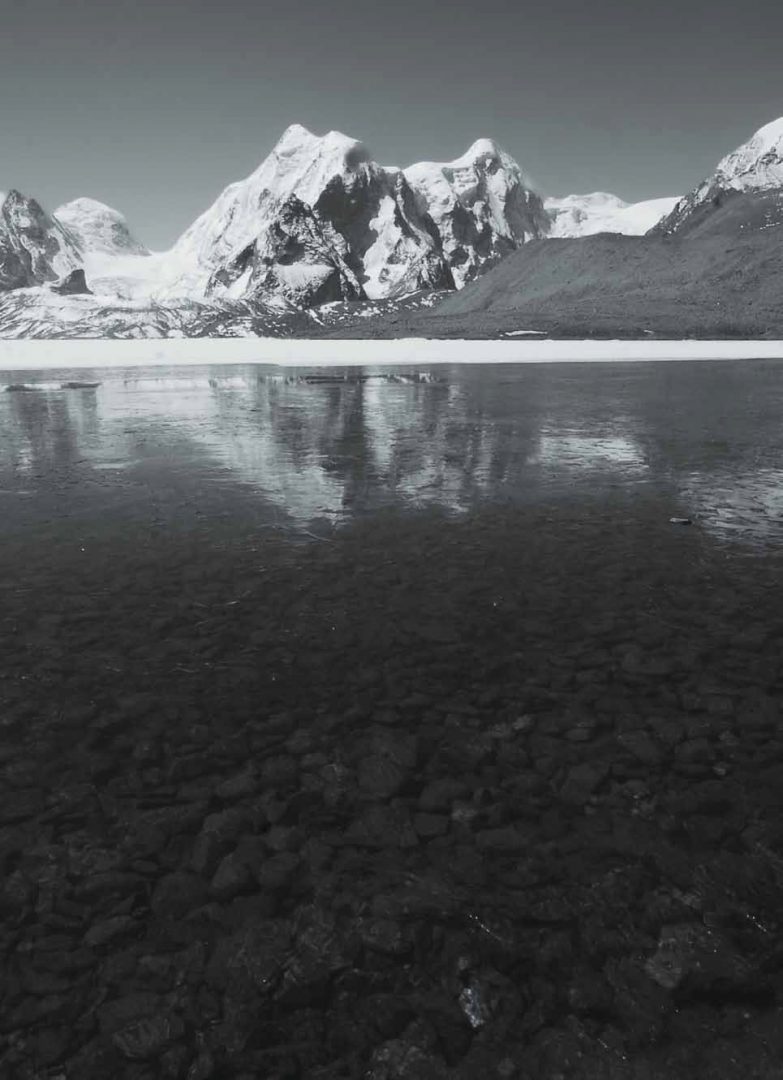 The Himalayas hold the largest mass of ice outside the poles and are the source of the 10 largest rivers in Asia, which provide water for more than 1.3 billion people. Rapidly rising temperatures resulting in reduction of glaciers will have many implications, especially for future downstream water supplies, causing changes in river-flows, groundwater and biodiversity, and impacting livelihoods.

The Dokpa live in the high altitudes of the Eastern Himalayas, traditionally moving higher up the mountains during winter to escape the snow. They live in extreme weather conditions and in largely inhospitable terrain, and are directly dependent on the provisioning services of nature for most of their livelihood requirements. Indigenous people like the Dokpa use resources like grazing pastures, medicinal, aromatic or edible plants, water sources for irrigation, and any changes in climate would affect their lifestyles directly. It might therefore not be inaccurate to refer to them as the metaphoric “canaries of the coal mines” with respect to the effects of climate change. Yet they are rarely considered in academic and policy discourses on climate change.

Climate change is an all-encompassing global phenomenon that can have tremendous consequences for both human as well as natural systems. The 2007 report of the Intergovernmental Panel on Climate Change predicted that mean global temperatures would increase by about 1.8‐4.0°C by the end of the century, and this has now been revised to 2‐7°C, with an increase of 5°C seeming most likely given current emission trajectories. This increasing trend of temperatures is predicted to have numerous cascading impacts on biodiversity, including gradual upward shifts in species’ range distributions, local or global extinctions, and altered flowering and fruiting patterns of plants.

Studies in the Himalayas, a global biodiversity hotspot, have shown that the mean temperatures in the Himalayan alpine zones have increased by 0.6 to 0.8°C since the late 19th century. The Himalayas hold the largest mass of ice outside the poles and are the source of the 10 largest rivers in Asia, which provide water for more than 1.3 billion people. Rapidly rising temperatures resulting in reduction of glaciers will have many implications, especially for future downstream water supplies, causing changes in river-flows, groundwater and biodiversity, and impacts on livelihoods.

Although studies in the alpine Himalayas indicate that climatic changes have significantly impacted biodiversity, they also seem to suggest that the people of the region have in fact been adapting to climate change. It is often seen that they are not just passive observers, but are actively refashioning their lives through numerous strategies, like migration, water conservation techniques, land reclamation and livelihood adaptation. Nevertheless, one must consider the important issue of scale before using this versatility to dismiss impacts of climate change. While climate change is a global phenomenon, human responses are based on very regional or local variations. Most climate change projections are on a larger scale, and often ignore the local scale effects. Indigenous people experiencing local changes in their climatic conditions have often been found to have an intimate familiarity with the natural rhythms and processes of their ecosystem. Scientists have suggested that the traditional ecological knowledge of local inhabitants can be utilised as baseline long-term datasets to analyse climate change as these have developed over centuries of trial and error. This approach could be very useful in the Himalayas, where such long-term baseline data have not been recorded.

Two communities from the Eastern Himalayas that provide an interesting contrast at a finer local scale are the agro-pastoral Lachenpas and the nomadic pastoral Dokpas. Both of these peoples still maintain their indigenous political institution, the Dzumsa, which primarily manages the patterns of utilisation of natural resources. Over the years, this institution has enabled the community a certain degree of resilience by adapting to changes in their socio-environmental surroundings (due to socio-economic, socio-political transformations, compromises for national security, and most recently due to the cascading effects of climate change). The two communities also practice transhumance—moving with the seasons. However, they differ in their patterns of movement, with the Lachenpas moving to the higher altitudes in the summer, and descending in the winter, while the Dokpas do just the opposite. The Dokpas move to higher altitudes in the winter to wind-blown, snowfree
pastures. Comparing the observations of these two communities on the obvious links between changing climatic conditions and biodiversity has resulted in a wealth of traditional ecological knowledge. 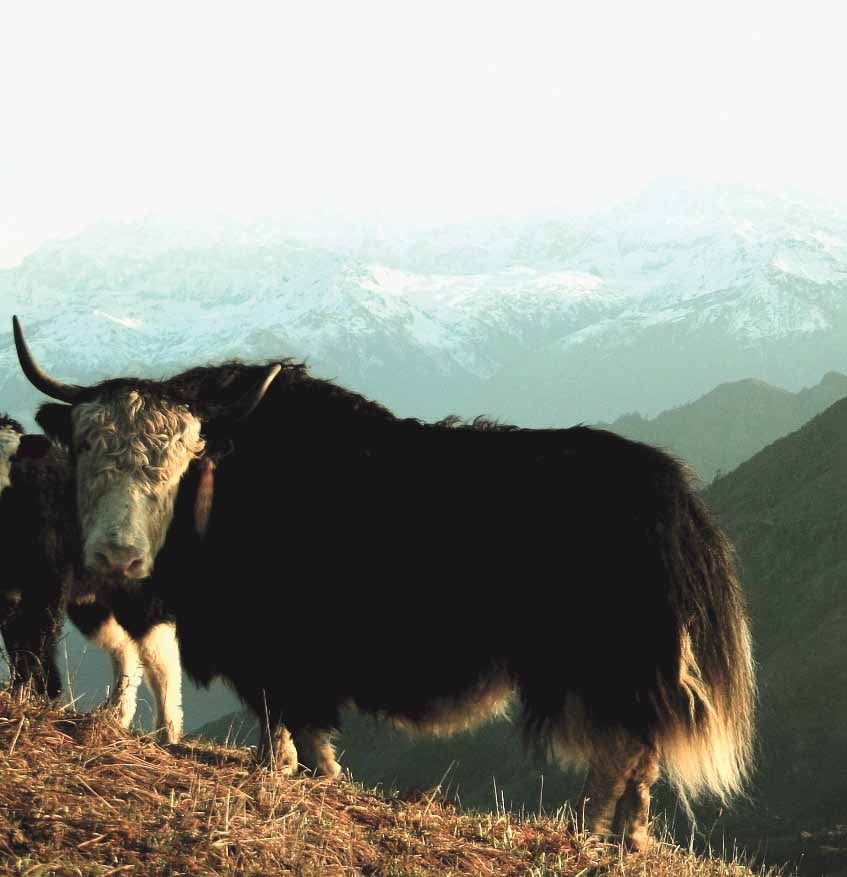 Local observations and perspectives of overall warming, the onset of seasons, snowfall amount and timing, glacier melting and water sources drying out, differed in some cases between the two communities. An almost unanimous number of Lachenpas pointed out that snowfall, which was a regular winter occurrence till seven years back, had not been experienced in the recent past. Similarly, all the Dokpas interviewed observed a decrease in the amount of snowfall where once there would be five feet of snow outside their temporary dwellings it was reduced to just a couple of feet or less. Both communities also noticed that the lowest altitude that received snowfall was now a village at a higher altitude. Similar results were recorded for overall warming, shifts in seasons as well as the duration.

Some of the most significant recorded impacts of climate change on global biodiversity include altered phenology, or patterns of flowering and fruiting. The two communities differed here, and the low altitude Lachenpa hardly noticed any kinds of changes. On the other hand, the Dokpas, who frequent the higher regions of the mountains made detailed observations. For example, they traditionally mark the onset of winter by the flowering of Gentiana ornata, a herbaceous plant with ornate blue flowers, as it would be the last flower to bloom before the snow covered their summer pastures. They pointed out that with the delayed winters, the flowering of the plant too has been delayed. The agro-pastoralist Lachenpas also noted that mosquito numbers have increased over the recent years. In fact, they remember no mosquitoes in Lachen till about seven years back, suggesting that mosquitoes are adapting to these higher altitudes as the climate gets warmer.

The local institutions of these communities, or the Dzumsa, have been able to adapt to some of the changes in climate using a combination of traditional knowledge as well as commonsense practices. With less snowfall and shorter but heavier spells of rain, pastures have become drier, causing large numbers of sheep to die. In response, the Dzumsa has banned the slaughter or sale of sheep for the next five years. The overall number of sheep has slowly increased in the past three years, and the Dzumsa plans to lift the ban gradually over the coming three years.

Yield of pheo (local variety of cereal) has decreased considerably, and the people believe that this is due to warmer weather. To avoid a shortage of food, they have turned to other crops. Crops from lower altitudes, like maize, cabbages and pumpkins, which were previously unable to grow here, are now grown successfully at Lachen (9000 feet above mean sea level). 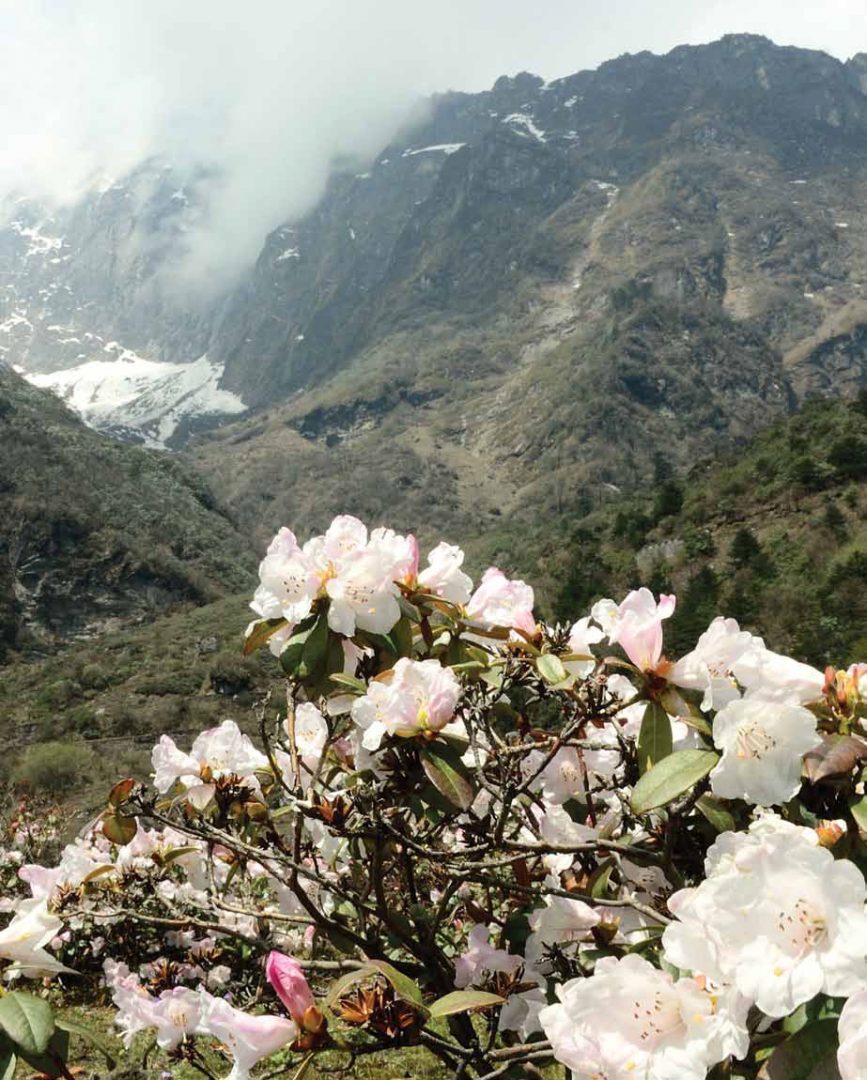 Carrots that were never grown at high altitudes are grown in Thangu (12500 feet above mean sea level). Beliefs and faith often also play a role in determining their solutions, and prayer flags, which some believe decrease snowfall, have been banned in an attempt to allay the severe impacts of the changing climate. The Dzumsa thus forms an important web, binding social structures with the natural systems. 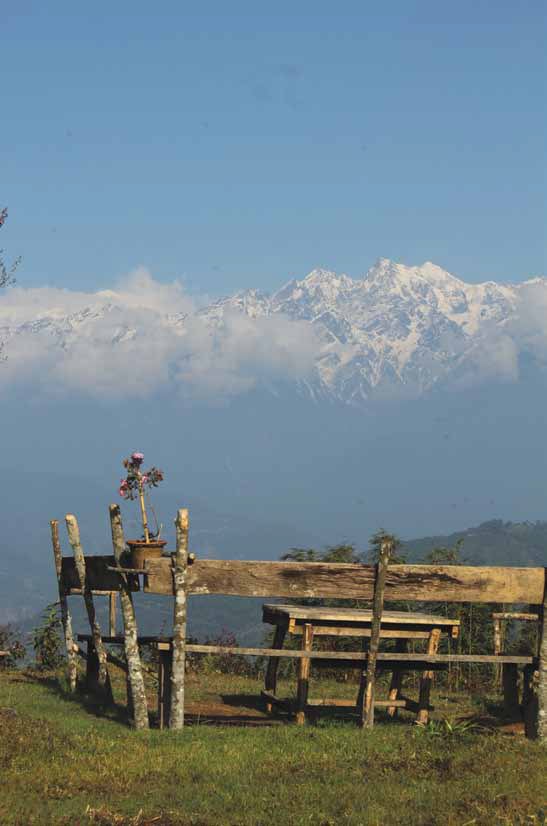 Perception studies of indigenous people on observed or experienced changing climatic conditions in other parts of the world have similarly demonstrated that traditional ecological knowledge is an important source of information for climate sciences. It is important to have holistic approaches while adapting to climate change, with integration and feedback loops between climate change science and indigenous peoples. For example, the Dokpas reported that certain plants are seen growing at altitudes much higher than where they were found 50 years ago. To investigate the veracity of this, I collected point source data in the field for the plant species named. I then crosschecked the present day observations with the range data of these plants from JD Hooker’s ‘Flora of British India’ (1850-1872 A.D.) and his ‘Himalayan Journals Notes of a Naturalist’ (1850 A.D). We were able to confirm indications of range extensions of four plants. Rheum nobile, Gentiana ornata, Primula primulina and Bistorta macrophylla, whose highest reported altitudes were 4500m, can now be located at 4784 m, 5212 m, 4824 m and 4724 m, respectively.

Indeed, indigenous peoples have much to offer to the discourse and actions countering climate change. They must be empowered to exercise self-determination to deal with climate change that threatens their traditional livelihoods and indeed their very existence. To effectively tackle climate change, local perceptions, adaptations, responses and solutions must be kept in mind, while also being inclusive of the traditional institutions like the Dzumsa that can effectively develop and implement adaptation and mitigation strategies.

Tenzing Ingty is a PhD student at the Ashoka Trust for Research in Ecology and the Environment (ATREE), India