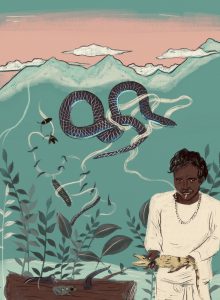 As a snake freak growing up in India, I was peerless. I mean, I had no buddies, no peer group who shared my obsession. I met the usual snake charmers who didn’t know very much about the natural history or behaviour of snakes and I felt no sense of camaraderie with them. Sometime in 1968, I read an article about snakes written by Harry Miller, a Welsh journalist based in Madras (the old name for Chennai, Tamil Nadu). He said he gained his knowledge of snakes from interacting with a local tribal community called the Irula and his description of their abilities to find snakes sounded more magical than true. Nonetheless, I jumped on a train and was in Madras two days later to meet this fabled group. I was immediately impressed with their magical ability to read almost invisible tracks on hard ground. For whenever I’m with the Irula, it is I who am their field assistant. They were more tuned to the seasons, ways of animals, and reading tracks than I or anyone else actually.

In 1969, I set up the Madras Snake Park, the very first one of its kind in the country. Naturally, I hired Irulas to help me with the venture. Three Irulas in particular were constant companions over the next thirty years: Natesan, Rajamani and Chockalingam. Besides helping me get the Snake Park going (constructing enclosures, and feeding and caring for the reptiles), Natesan was my liaison with other Irulas who were shy to talk to me. Natesan understood my version of Tamil and quickly picked up phrases in English, enough so that his nickname among the Irula was ‘Sure man’.

Early on, we realized that to make the Snake Park a success we needed to go out and catch or otherwise acquire reptiles from other parts of the country. So we started making regular trips to the Western Ghats and brought back pit vipers, trinket snakes, monitor lizards and other interesting species. This was all new terrain for Natesan; he was a man of the open, dry scrub jungle, but he soon adapted and used his superb powers of observation to find creatures in the rainforest.

I remember one trip to Nilambur Valley in Kerala. We parked the jeep on an old forest road and walked down till we hit the nearest large stream. After a ritual smoke, Natesan invoked his goddess Kaniamma and we set off downstream, walking slowly along the opposite banks of the stream. We both exclaimed to each other when we saw an interesting frog (all new to us), giant black snail, knobby backed millipede or a plant of note. Natesan called me over to see the vine that the Irula call ‘Veli-kodi kerengu’, a yam that was once a staple of the Irula diet. He dug around the base of the stem and soon unearthed a huge tuber, the size of his arm. He sliced the bottom three quarters of the tuber and carefully re-planted the top quarter with the stem and vine attached. Natesan was most impressed with the size of the tuber and said that we never find such large ones back home.

We continued walking along the stream edge and I saw the first Malabar pit viper of the day. Here I could be the teacher and showed Natesan just where the pit vipers prefer to sit, motionless and splotched like lichen, along a root or low tree branches very near the flowing water where it is cool. Once he knew where they were, Natesan was spotting pit vipers every few hundred meters and it wasn’t long before we had found 24 of them! Along the way Natesan dug out a couple of the big, glossy blue-black forest scorpions which I wanted to photograph. I showed him the large silvery web-lined nest holes of tarantulas which preferred the higher embankments above the water line. My previous trips to the Western Ghats gave me a slight advantage but very soon Natesan was showing me things that I might have otherwise missed including bird nests, rat and squirrel nests and the long strings of toad eggs in a still pool.

On one trip to the Nilgiris, we dropped in to see a colony of ‘hill Irula’ at Mukkali, whom I had heard about and was interested to see how they differed from our ‘plains Irula’. Natesan was in good form that day and for hours shared his knowledge of herbal remedies with the elders of that tribe. It turned out that these were very different people and obviously a completely different tribe with the same name being a mere coincidence. The plains Irula call themselves ‘Villiyan’ (‘people of the bow’) and Irula may have been a name bestowed on them by outsiders. The ‘hill Irula’ had no special knowledge of reptiles and rodents and were fascinated with Natesan’s herbal remedies for snakebite. Natesan was fascinated with the comely hill Irula women and later confided to me that he’d already talked to them about bringing a hill Irula woman home as his bride.

One spectacular trip Natesan and I took was to an area now called the Kalakkad- Mundanthurai Tiger Reserve. When Natesan and I arrived in these hills we put out the word out amongst the tea estate labourers that we were interested in any snakes they see. There were many reports of king cobras and that was one snake I was sure we needed for the Madras Snake Park. Eventually, we did get a pair which was causing considerable consternation in the tea fields.

There was no one stationed at the Forest Department Bungalow in Sengaltheri where we next went to. So we forced the door open and made ourselves at home, starting a small fire in the kitchen for a much needed tea fix. We hunted the grasslands, edges of a stream and the small forest patches in the valleys and came up with several snakes neither of us had seen before including a Forsten’s Cat Snake, Montane Trinket Snake, Brown Vine Snake and a Flying Snake.

Natesan was learning new things too, used as he was to the dry scrub jungles of Kanchipuram district and the ecology of rice and peanut fields. Here in the rainforest we had to look for snakes under logs, in tree hollows and in leaf litter, while back home it was a question of mainly going from one rat hole to the next until a fresh snake track was spotted. Then the snake, if home, was dug out.

Natesan was as amazed as I was when we turned over a big log and found an array of creatures, all the way from a pygmy shrew and a shieldtail snake to a number of kinds of beetles and their larva, millipedes, centipedes, a couple of frogs and a toad or two and some spectacular, large jungle cockroaches. But what impressed Natesan the most were the leeches. He was familiar with the ‘buffalo leeches’, big ones, sometimes eight inches long, found in waterways on plains and not so interested in human blood it seems. But the forest leeches were a different story, coming aboard your feet and legs literally by the hundreds in some areas.

After sitting on a rock “deleeching” ourselves, Natesan taught me the art of stopping the blood flow. Leeches have a heparin-like anticoagulant which they use to keep the blood flowing into their gullets. After they’ve dropped off, satiated, the wound will keep bleeding for hours making a big mess. Natesan tore a small piece of paper off from his packet of beedis and applied a bit of it to each leech bite after wiping the blood off. The beedi wrapper was the perfect stopper unlike newspaper or toilet paper which are just a bit too absorbent to work. Natesan truly was a man of many resources.

Romulus Whitaker is an Indian of American origin who has a lifelong obsession with reptiles.

Upasana Agarwal is an illustrator based out of Kolkata. When they’re not drawing they organise a LGBTQ art space in the city. Their work is largely influenced by the nostalgia and history of urban landscapes and the fabric of life that ties them together. They are obsessed with tea, cats and plants.