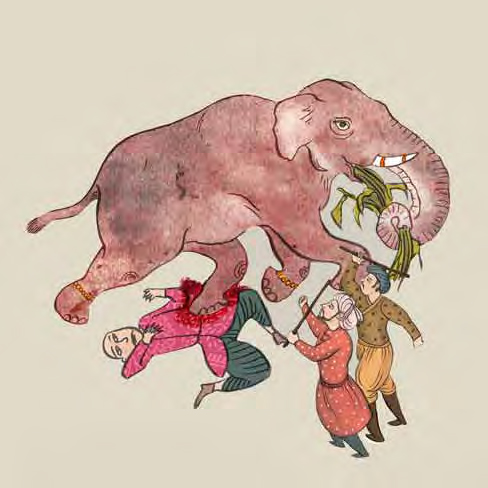 Farmers of the rainforests of Nigeria, Africa constructed an extensive network of earthen walls and moats. Astonishingly, in some places, the walls are 20 m high and the moats 20 m deep. What makes this even more remarkable is that Sungbo’s Eredo (meaning “Sungbo’s Ditch”) is thought to have been built around 1150 AD on the orders of a childless matriarch, Bilikisu Sungbo (although the dates don’t add up, locals believe that she is none other than the Queen of Sheba). The fortifications span 160 km encompassing an area of 1,400 sq km, the size of Delhi. Nearby Benin City has even more spectacular walls and trenches, extending 16,000 km and covering an area of 6,500 sq km. This is thought to be the single largest archaeological phenomenon on the planet, an enterprise larger than the Egyptian pyramids. The zooarchaeologist, Juliet Clutton-Brock, believes they may be evidence of man’s earliest elaborate defense of crops against elephants. However, conflict with these pachyderms is thought to have started much earlier, when man first began to till the soil.

A millennium later, the range of devices that farmers use to keep elephants at bay is a tribute to the ingenuity of both, animals and humans. The simplest and most widespread (perhaps the oldest) practice is guarding crops through the night from tree top machans (or ground level tunsis, rickety shacks sometimes protected by a trench, used in north Bengal and Assam). When elephants are spotted, the vigilant farmers set up a cacophonic racket by lighting fire crackers, banging plates or rattling other noisy implements to scare the animals away. When extended families lived together, men took turns at guard duty. Now that nuclear families are the norm, the burden of chasing elephants falls on the man of the household night after night; hiring guards is not an option for poor farmers. The price of inadvertently falling asleep after a long day’s labour is catastrophic: the loss of the family’s sustenance for the next few months.

If an animal is repeatedly chased away from food, it gets irri-table and elephants are no exception. Humans who haven’t slept well for days become crotchety. When bad-tempered members of two species confront each other, the stage is set for tragic accidents. The elephants’ dark coloration renders them almost invisible at night and drowsy farmers on patrol have been maimed or killed. Bursting fire crackers can goad elephants to take out their aggression on buildings or machans. Feeble torch lights, the barking of dogs and even a solitary human voice can cause a frustrated elephant to charge, some-times with fatal consequences. Guarding crops is probably one of the most dangerous occupations in elephant country and several villagers tilling marginal lands have abandoned farming altogether.

In parts of elephant country, farmers complain that none of the commonly used methods such as torch lights and bursting fire crackers work anymore. In north Bengal and Assam, farmers have resorted to chasing elephants using mashal (a spear tip surrounded by a flaming ball of rags), birio (indigenous sling shots), poison arrows, flaming arrow heads, jute (fire balls on sticks), cycle tyres set afire, and more. Some of these cause grievous injuries to elephants and the pain can ramp up their aggression. In areas where damage caused by elephants is particularly high and farming has become unsustainable, men emigrate to cities for work leaving their wives to guard the crops. One agitated woman in Upper Kolabari village (north Bengal) shrieked, “We used to think that elephants were god, but not anymore. If they are killed, then finally there will be peace.” Eventually when she calmed down, she complained that she hadn’t slept

for weeks and the stress of managing the farm and family while her husband was away was sapping her energy. The despondent woman was only voicing her threats, others more intolerant carry them out—they kill elephants with home-made guns, electric wires hooked up to high tension cables, and poison or explosive filled pumpkins.

In an effort to aid the beleaguered farmers, almost every division of the Forest Department in north Bengal and Assam forms a squad to chase elephants away during the harvest season. Depending on the obstinacy of the herd, it may take a few hours to a full night’s work to complete the job and the squad can only rush to one or two sites per night. On jeeps, tractors or trained elephants called kumki, they fire blanks to drive wild elephants away. One beat officer claimed proudly, “The elephants won’t budge if your vehicle goes, but as soon as our jeep arrives, they start moving.” During the harvest season, the field staff of the Forest Department is stretched to the limit, performing their regular duties through the day and chasing elephants every night without overtime or other benefits. On the other hand, farmers complain that these squads are inadequate and that the elephants return to the crops once the squads leave.

Perhaps the one method that has gained mythical powers of stopping elephants in their tracks is the electric fence. The non-lethal pulses of high voltage power carried along steel wires, unpleasantly jolts a barging elephant, warning it to stay away from the farm. As ingenious as it sounds, electric fences are no panacea. Desperate elephants have learnt a variety of tricks to get through fences—toppling trees onto them, using their tusks to rip or the soles of their feet to step on the wires and even running into them bringing posts and wires down! In Kenya, removing the tusks of eight fence-breaking bull elephants did not stop them from breaking 20 electric fences in the following five days. Once an elephant loses its fear of electricity, no fence, however sophisticated, appears to stop it.

Several NGOs in different parts of India are testing and imple-menting different methods of protecting crops from elephants. Perhaps the simplest innovation is the creation of voluntary youth groups to watch for elephants from machans. Young men spend their evenings playing card games while keeping an eye out for the pachyderms. Some of the other experiments range from using thorny plants to create a ‘biofence’, alternate inedible cash crops, bee hives along the perimeter of farms, trip wire alarms that alert sleeping farmers to the presence of elephants, and delivering chilli’s pungency through a variety of means (smoke, spray, paste smeared on a rope surrounding the crops). Some of them have shown initial promise but that is mainly because elephants stay away from anything new and unusual; if they put their minds to it, they seem to eventually overcome these obstacles. This talent inspired the ancients to create the elephant-headed god, Ganesa or Vinayaka, the super-human clearer of obstructions.

When bad-tempered members of two species confront each other, the stage is set for tragic accidents.

The crucial factor that determines the success or failure of any conflict resolution measure seems to depend on the elephants’ desperation for crops. In areas where there is abundant natural forage such as the Nilgiri Biosphere Reserve, elephants that are tempted by agricultural goodies, can be deterred by any of the methods. But in places such as Kodagu (Karnataka), Assam, north Bengal, Orissa and the Northeast where the assault on forests is intense and unrelenting, hungry elephants rely on human agricultural enterprise for their survival and they will overcome any challenge that man erects between them and the food they crave. Confining these giants with gargantuan appetites to fragmented insubstantial forests using fences, trenches, or walls is bound to fail (and unethical); but should these measures work, the elephants will in all likelihood eat through the forests and worsen the situation. Enriching the habitat by planting fodder, trees, and bamboo in elephant country has been suggested, but little is known of its efficacy.

We cannot hope to be successful by gnawing away at the habitat with one hand and with the other, curbing, altering and manipulating elephant behaviour and movement according to our convenience with the expectation that they will obey. That’s like trying to staunch a hemorrhage with several little band-aids. Wildlife managers are constantly on the look-out for measures that work decisively against elephants under any conditions, but unfortunately, there are none. At best, using the various measures in combination, changing them frequently and constantly improvising will buy us some time while a long-term habitat protection strategy is developed.

Conflict is caused mainly as a result of human actions, and this has to be at the heart of any attempt at resolution. Elephants are only compensating for what they have lost. In other words, it is not the elephants that are badly behaved, it is us. According to Project Elephant, 3% of India’s land surface is elephant country and of this, only 10% is affected by conflict. It is still possible to achieve a more amiable relationship with elephants if we put our minds to it and this is the time to do it before we irrevocably lose more elephant habitat.

Janaki Lenin is a freelance writer with a special interest in wildlife and conservation. janaki@gmail.com