Collaborative Research and Management among the Kaxinawá in Amazonia: Kaxinawá and biologists collaborate to monitor and manage wildlife in Brazil

Research and conservation frequently go hand in hand. The data collected by academics helps inform management of natural resources, such as the establishment of reserves or bag limits on wild game. Most students complete their research in five years, and the grants that fund professors’ research often have similar life spans. Many conservation problems, however, can not be characterised that quickly, and monitoring is required to assess management efforts. This creates a disconnection between the efforts of academics and the needs of conservation.

To address this, local people who rely on natural resource use are being integrated as collaborators in long-term biodiversity research. Pedro de Araujo Lima Constantino of the Brazilian non-profit Comissão Pró-Índio do Acre (CPI- AC), his colleagues at the University of Florida, and members of the Kaxinawá indigenous group report on their collaboration in Biological Conservation.

The Kaxinawá live in the Brazilian and Peruvian Amazon. In Brazil, the Kaxinawá live near the remote headwaters of the Jordão and Tarauacá rivers. In 1991 the Kaxinawá began receiving official title to their land. This allowed them to bar hunters from nearby Jordão City from their territory.

A conventional wildlife survey was conducted during the establishment of these territories. Wildlife populations were found to be severely impacted by unsustainable hunting, and several species were concluded to be locally extinct. The Kaxinawá had also recognised that game was becoming less abundant. In 1996 they sought resource management guidance from CPI-AC. CPI-AC began training indigenous agroforestry agents (IAAs) to help the community develop sustainable resource management practices.

Among the IAAs’ activities was monitoring hunting. In 2005 scientists collaborated with the Kaxinawá to systematise their monitoring system and develop hypotheses that could be tested through their efforts, as part of a bi-national conservation project between Brazil and Peru in the surroundings of Serra do Divisor, Acre. The Kaxinawá proposed that there was variation in the abundance of game between villages in their territory, and that the most favored species remained abundant only near the isolated headwaters of the rivers.

They also hypothesised that land use, hunting, and human density were the main factors causing this variation. Constantino and his team then worked with the Kaxinawá to develop methods to test these hypotheses. An important goal of this process was to assure that the data would be meaningful to biologists as well as the Kaxinawá. Both parties could therefore interpret the results and collaborate to refine the Kaxinawá’s wildlife management plan.

IAAs began surveying every household in their village. For every animal killed, the IAAs recorded data about the animal and the activity of the hunting party. The study reports on the first year of this ongoing study, with individual villages contributing up to 11 months of continous data.

The study provided new insights into the status of game species in the area, and the effects of hunting. The IAAs recorded 33 different species being harvested. Five of these were purported by ecologists to be extinct in 1996. One of the ‘extinct’ species, the white-lipped peccary (Tayassu pecari), was being harvested regularly by villages along the entire river. Other species deemed rare by the 1996 survey were also commonly harvested. 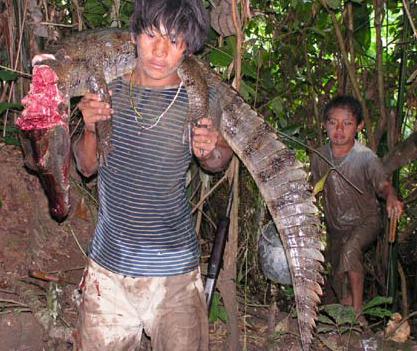 Some of these species were perhaps missed during the 1996 survey, while others had likely returned to the area from near-by nature preserves. These findings indicate the importance of using these collaborative methods in addition to conventional wildlife surveys.

Analysis of the IAAs’ data indicated that wildlife abundance was highest near the headwaters of the rivers and decreased downstream toward Jordão City. As proposed by the Kaxinawá, this trend correlated with increasing human population density, the density of villages in an area, the age of villages, and the number of trails for harvesting rubber.

The authors also examined whether the analyses done with the IAAs relatively simple data corresponded to more complex multivariate analysis. In general, results from the basic univariate variables collected by the IAAs were correlated with multivariate analyses. This indicates that more straight-forward forms of wildlife data and analysis can be as robust as more labor-intensive techniques 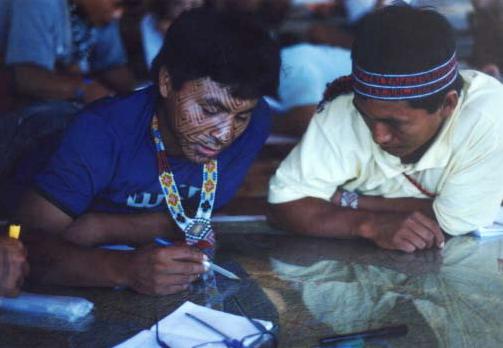 Additional insights were gained regarding the effects of wildlife abundance on Kaxinawá hunting. Down-stream villagers were more likely to hunt non-game species or those considered suitable when food was short. This included the taboo giant-armadillo and capybara. Constantino and his colleagues propose that depleted wildlife populations have led to the harvest of less-preferred species and the expansion of some villagers’ diets.

These research techniques and villager participation in data analysis are being promoted via CPI-AC to other indigenous groups. Constantino and his colleagues propose that results from this long-term and cross-cultural collaboration will continue to help the Kaxinawá and other indigenous peoples to understand and manage their wildlife resources.

Nathan Brouwer (brouwern@gmail. com) is a PhD student at the Department of Biological Sciences, University of Pittsburgh, USA.