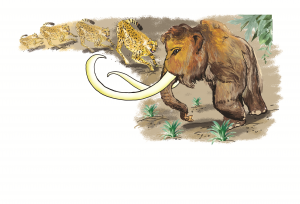 Conservation is faddy. By that we mean that it pursues new enthusiasms vigorously and eagerly. The observation is not our own. Bill Adams and Kent Redford pointed this out several years ago. And its not necessarily a criticism either. You call me faddy, and I call myself someone who moves with the time. And I’ll call you a faddyist back.

But every now and then some conservationists can seize on an idea which is particularly bananas. Our ‘favourites’ include the plan to clone the cheetah in India (yes, having hundreds of genetically identical cheetahs would save the species), he plan to revive mammoths (we can barely live with elephants), the plan to save Swallowtail butterflies in the UK by preventing the reed cutting which in fact sustained the butterfly habitat, the management of forest ecosystems in north America by killing wolves and suppressing fire, and the plan to evict cattle from Keoladeo National Park in India when the cattle grazing actually helped maintain the wetland habitat. And then there is the time the US flew millions of endangered Kemps ridley turtle eggs from Mexico to the US and incubated them in Styrofoam boxes, releasing only males for many years (because they didn’t know yet that temperature determined sex of hatchlings).

The thing about those ideas is that they are, fortunately, isolates. But, every now and then two wacky fads come along at once. As we have previously written, the Half-Earth project is one of the more bonkers, and potentially callous, ideas out there. But now there is a new one – Compassionate Conservation.

It’s a bit difficult to summarise Compassionate Conservation. It is not the idea that, as feral cats chomp through your endemic avifauna, you should feel sorry for the cats. It is more complicated than that – but not very much. It’s not exactly that, as crocodiles crunch on fishermen, we should sympathise with the crocodile because the meal wasn’t sufficiently salty. But its’ heading in that direction. Nor is it the idea that nothing should kill anything ever – at least we don’t think it is.

It is important to tackle this thinking. But in this article, rather than engage too deeply with this approach, we propose instead to adopt it, adapt it and turn it to good use. In fact, we’d like to do that with both of these new fads in as constructive, dynamic, novel, unique and revolutionary manner as possible. So, bringing together the ‘Very Best of Half Earth and Compassionate Conservation’, we would like to offer to the world a new and improved trend which we are proud to launch here. It is: ‘Compassionate Halfism’®©.

Compassionate Halfism is the idea that there are lots of things that we have far too much of and that this world would be a much more wonderful place if these things were precisely cut  in half. Obviously the two fads we have just mentioned are themselves prime candidates for such halving. But there are clearly plenty of others. And so we’d like to start a more general ‘Half It’ movement that seeks to cut a swathe through the excess of our lives.

The current list for this populist movement is given below. Additions are welcome.

Kartel Shockington is a failed comic book creation with special powers of rapid hair loss. He sometimes appears as  Kartik Shanker, and at  other times as Dan Brockington.

Daniel Brockington is at University of Sheffield, UK. Email: d.brockington@sheffield.ac.uk.

Amit Kaikini Is a freelance illustrator, with a decade of experience in digital advertising He loves to explore Sci-Fi & Horror genres, with an inclination towards nature & a desire for surreal storytelling, he is working towards self- publishing his own comics in the near future.