Conservation of Asiatic lions: where do we go now? 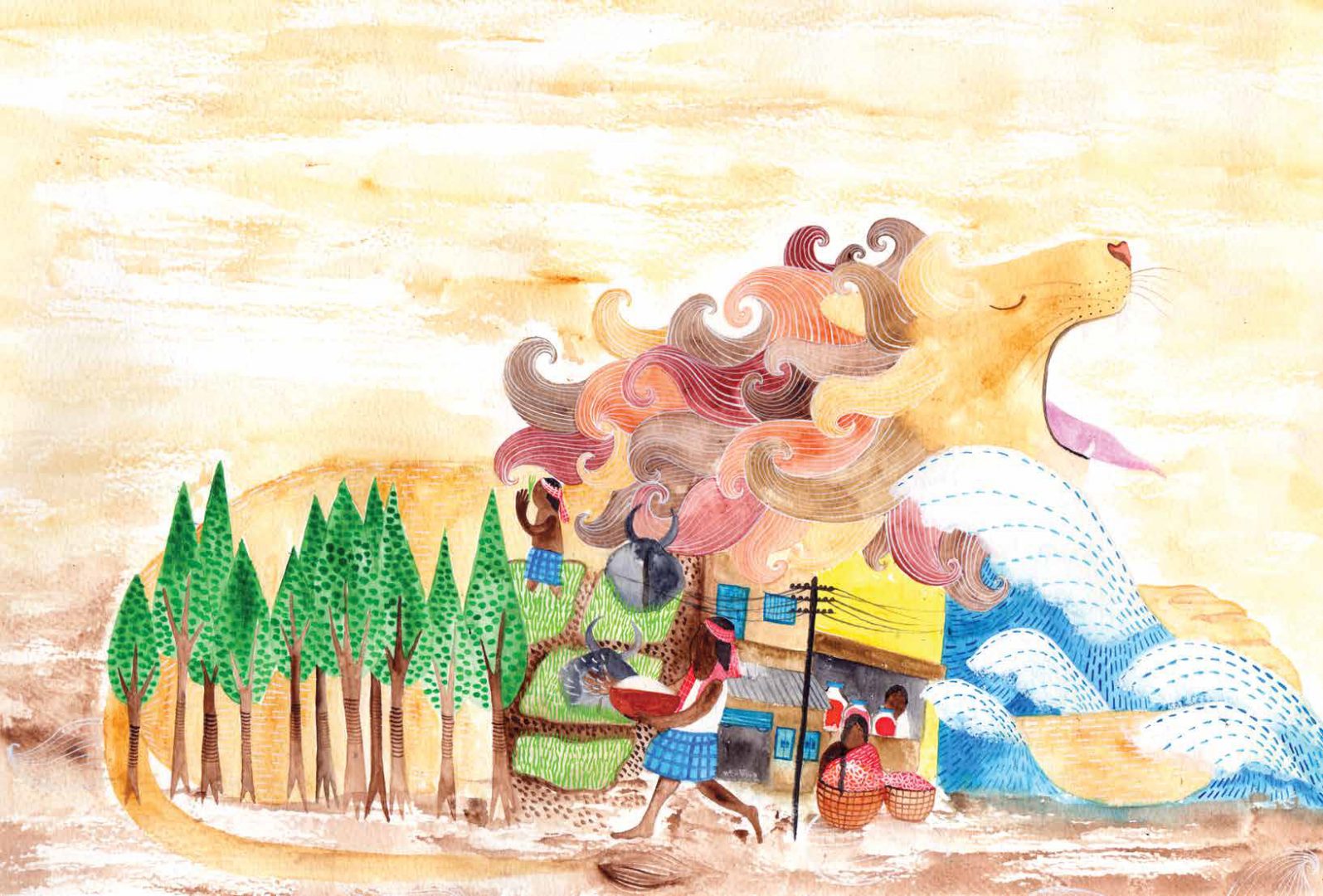 The Asiatic lions represent a carefree existence to many. Having historically benefitted from royal patronage, they continue to enjoy painstaking protection in the Gir Protected Area. The lions can rest assured that their food security, water availability, habitat suitability and safety are meticulously managed and vitriolically debated in conservation forums. Dispersing through increasingly urbanised settings, establishing home ranges in new habitats outside the protected area, nothing seems to deter the lions except for the danger posed by an occasional open well, electrified fence or poisoned carcass. Pride and love of lions of local people, media and political pressure ensure that concerted and constant efforts are kept up to save it from extinction. Recently, when 6 lions died due to rail accidents outside the PA in Rajula area in Amreli district, there was much public and media outcry as a result of which Rs. 10 crore was immediately allotted to investigate, mitigate and solve the problem. Speed regulation, fencing along railway tracks, and construction of 23 underpasses were proposed to ensure safe passage of wild animals thereafter. When results of a recent “study” conducted in Lathi Liliya area hinted at fluorosis in lions due to high levels of fluoride in the ground water, there was a scramble to act and a study was initiated to investigate the problem in greater detail. Throughout the Gir landscape, alert forest department staff are on the lookout for injured or ailing lions so as to provide prompt on-field medical attention or move them to the animal shelter at Sasan Gir for better care. The involvement is so high that it is sometimes misplaced. Some overenthusiastic staff often take it upon themselves, even as they endanger their own lives, to interfere in cub rearing, territorial strife and movement paths of lions. The immense political and media pressure sometimes makes such measures obligatory.

So, what then really ails the Asiatic lion? Is conservation about increasing the numbers alone?

In the past, the Asiatic lion population has been revived and saved from the brink of extinction through conservation interventions at critical periods. Fortunately, in the past 3 decades, there has been consistent growth in the population. The lion numbers were around 240 in 1990 and have increased to over 400 in 2010. The population growth has also resulted in increased movement, dispersal and establishment of lions in natural habitat patches outside the PA with the result that about 25% of the lion population is now found in Girnar WLS, coastal areas and in distinct patches of natural habitats along Shetrunji River northeast of Gir PA. In a decade, livestock depredation and incidences of lion attacks on people have increased. It is evident that the continued survival of lions depends on people’s tolerance and at the same time, protection of lions from poaching, accidents, retaliatory killing, and diseases. Dispersing lions face risk of transmission of epidemic diseases due to contact with people and domestic animals. Studies have identified domestic dogs as a major source of rabies and canine distemper outbreaks. Hard lessons have already been learnt from the canine distemper virus epidemic in Serengeti National Park. Although kept under check through stringent protection and laws, poaching is a looming threat especially when endangered species like lions are outside protected areas in human landscapes where it is difficult to monitor their safety. To keep up with these new demands, the focus of management has shifted and is now oriented towards effective conflict mitigation, secure passage and creation of dispersal corridors and resource rich natural habitats outside the PA for the spillover population.

This situation is not unique to the Gir-lion ecosystem. Worldwide, forest and wildlife conservation has stepped out of the forest into the “outside” world to confront a range of new challenges. Landscape level planning and management is something to wish for but not easily achieved, especially for large carnivores. Expansion of habitat preferably along the natural dispersal range of lions in the Gir landscape seems to be a logical way forward but is limited by a matrix of agropastoral landscapes, industrial townships and highly populated villages.

This situation justifies the increasing focus on human-dominated landscapes and reconciliation of human needs and environmental conservation. Incentive based conservation, monetary compensation for losses incurred due to livestock depredation, relocation, community participation and empowerment are conservation approaches that are gaining favour in recent times with the lion as focal species.

Which model for Gir? 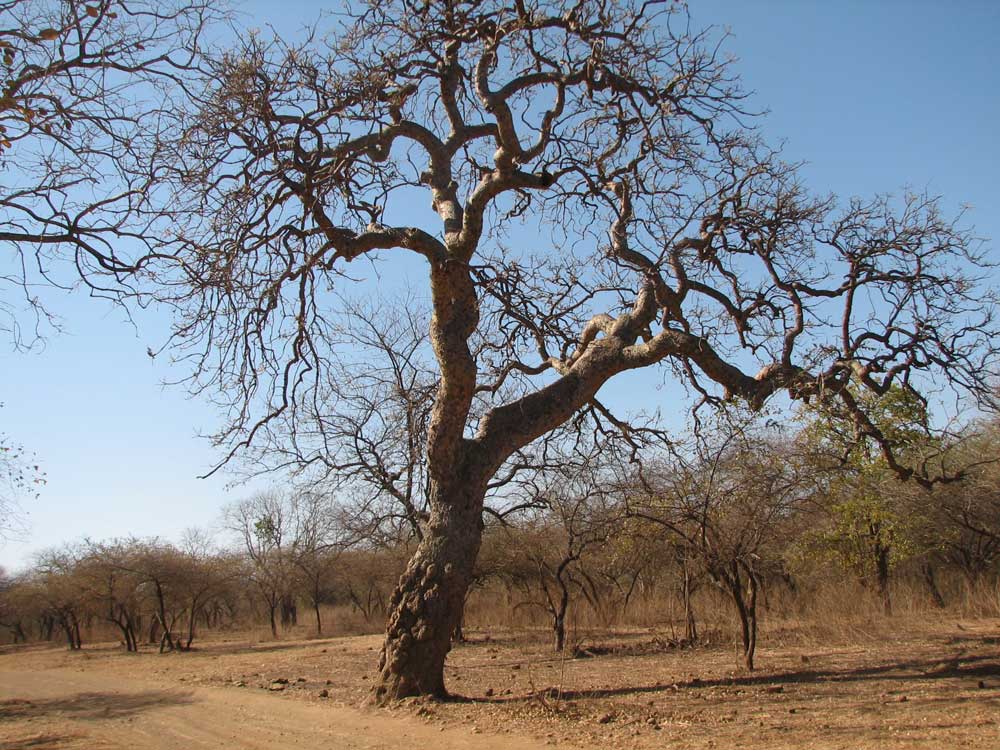 A majority of people living in the peripheral villages (97 villages and one lakh humans) of Gir PA belong to families that have been resident in this area for several generations and are predominantly land owners with medium sized land-holdings (5-15 ha) practicing agriculture. Crop raiding and livestock loss (partially compensated by the forest department) are the penalty they pay due to proximity to the forest while deriving few benefits by way of livelihood or resource collection. In spite of this, our study revealed a positive sentiment towards the forests as people recognised the benefits derived by way of ecosystem services such as soil fertility and water availability favouring high crop yields. Their attitude towards lions is even more remarkable. To say that the local people are ‘tolerant’ would be an understatement in fact they have a great sense of pride and love for lions. This attitude has favoured lion survival through several generations but as lions move further beyond this zone of historical coexistence, an uneasy relationship and apprehension among local people endangers their survival. Thus, there is a subtle change in the cultural acceptance and tolerance of the presence of lions amidst human habitations. Therefore, future conservation success will depend on achieving goodwill towards lions across a wider swathe of the landscape.

Gir Sanctuary has emerged as a very popular tourist destination particularly in recent years with close to 3 lakh tourists contributing to an annual revenue of about 2.5 crores. An additional 250,000 people visit Tulsishayam temple located at the edge of the sanctuary, and Banej and Kankai temples located within the core area of the sanctuary. In spite of the enormous tourist influx and high revenue, local people are not directly benefitting nor are they dependent on this income for their livelihood. In such a thriving agro-pastoral environment, models of conservation where revenue from tourism is used to boost local economy and create partnerships with local people is not strictly necessary. In spite of this, the revenue generated from tourism has been made available for the conservation and management of Gir PA by the State government of Gujarat. How effectively this fund is utilised and how well the people residing in the Gir landscape are allowed to appreciate and participate in conservation and management of the Asiatic lion and its habitat will determine the future of the species. Unless well planned, tourism and developmental activities would have irreversible repercussions where neither the local people nor the wildlife will benefit. A case in the point is a proposal to construct a ring road around the Gir Protected Area System (Gir National Park and Gir, Pania, Mitiyala and Girnar Sanctuary) at a cost of Rs. 260 crores. A project of this nature would cause land-use changes, promote rapid development and urbanisation and, most importantly, delink corridors for animal movement and hence pose a threat for the safe movement of animals. 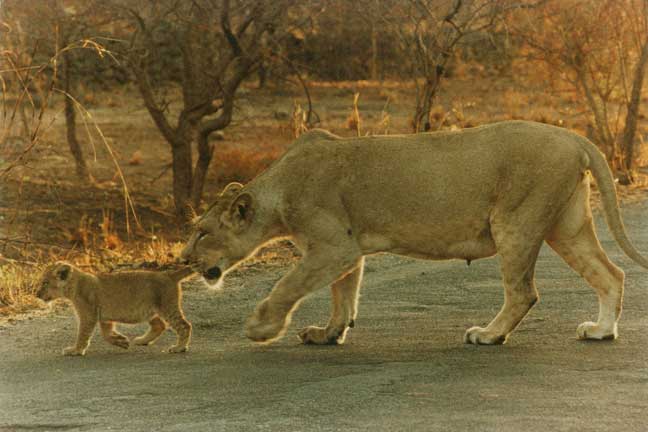 Lion with its cub at Gir.

The only free-ranging population of Asiatic lions is presently limited to a single habitat and conservationists the world over are convinced of the need for additional sites. For this purpose, Barda Wildlife Sanctuary in Porbander district, at a distance of about 100 km from Gir PA, has been identified as an ideal habitat for translocation of lions. Experts are of the opinion that the choice of Barda WLS may yet be inadequate to save lions from the ill-effects of disease outbreaks and natural calamities as it is too close to the source population. On the other hand, a persistent conservation campaign since 1993 has argued the need for an alternate home to secure this endangered population and has identified Kuno WLS in Madhya Pradesh State as the most suitable habitat for this purpose. A recent Supreme Court ruling has given the much needed impetus to this long pending proposal and hopefully a well-meaning and critical conservation initiative will be realized very soon.