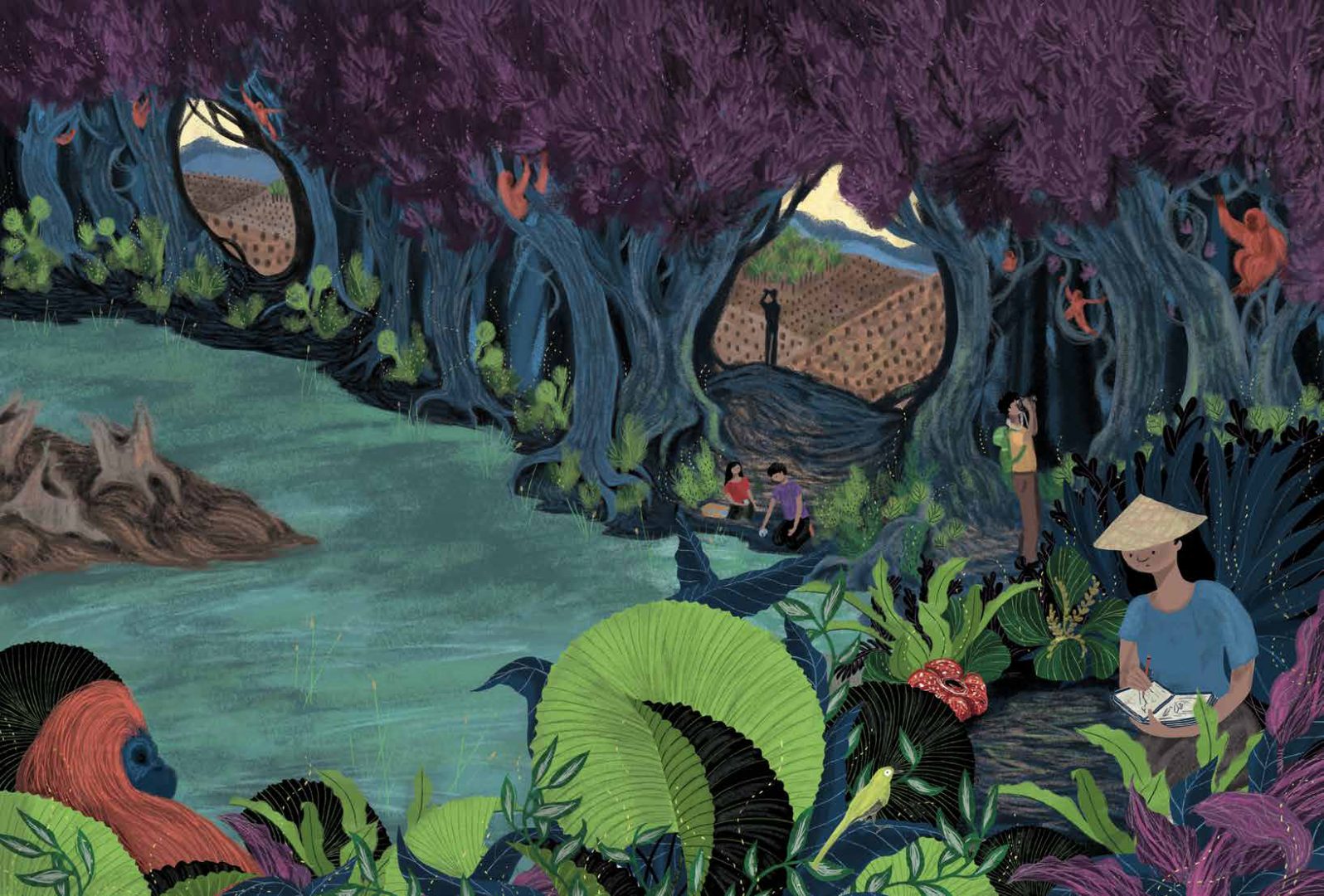 While walking through the rainforests of Borneo and Sumatra it won’t be long until you come across some amazing sights, sounds, and smells. Leeches inching up your legs, the loud hoots of gibbons, and the sweet smell of wet soil after a downpour. Keep looking up and if you’re lucky you might see a glimpse of red hair high in the canopy. Asia’s only great ape, the orangutan, is an iconic species of Southeast Asia but is, unfortunately, becoming a rare sight in the wild.

Two subspecies of orangutans live in Southeast Asia: the Bornean orangutan (Pongo pygmaeus) and the Sumatran orangutan (Pongo abelii). They are the only great apes found in this part of the world and spend most of their lives high in the rainforest canopy dining on fruit, leaves, roots, and flowers. As their survival depends on healthy forests, deforestation has had a devastating effect on orangutan populations. In the year 2000, Bornean orangutans were listed as endangered on the IUCN list, while Sumatran orangutans were classified as critically endangered and are predicted to go extinct by 2100 if conservation efforts are unsuccessful.

Habitat loss is the biggest threat to orangutan populations and palm oil is the biggest culprit. Palm oil is a type of vegetable oil used in food such as biscuits, chocolates, packaged food, and bread, in addition to soaps and cosmetics like lipstick and toothpaste. Because palm oil is used in so many products, the high demand for it is responsible for destroying much of Southeast Asia’s rainforests and biodiversity. The areas primarily cleared for palm oil plantations are the peat forests and lowland forests, which are unfortunately the preferred habitat for orangutans. As little as 40 years ago both Borneo and Sumatra were covered in forests, but today the landscape has drastically changed and only small pockets of forests remain. Orangutans struggle to survive in these fragmented forests as they eat, sleep, and travel through the trees, rarely touching the ground. The number of orangutans has plummeted from over 230,000 to around 25,000 individuals in 100 years. To make things worse, loggers, poachers, and palm oil farmers have now started to encroach on the last few refuges for struggling orangutan populations.

Habitat loss is not the only threat orangutans face, poaching and the illegal pet trade are also threatening their numbers due to the high demand for bushmeat and exotic pets worldwide. Both industries go hand-in-hand as adult orangutans are killed for bushmeat and their babies sold as illegal pets. Law enforcement is minimal in Indonesia so despite having complete wildlife protection laws, Indonesia’s law enforcement is notoriously weak and ineffective. In addition, the majority of primates being kept as pets are by local people, suggesting the need for more education and law enforcement in local communities. All of the threats to orangutan populations are interconnected and require both local and global intervention to address them.

Community-based conservation (CBC) is a tool currently used by NGO’s and governments to address the threats to orangutan populations in both Borneo and Sumatra. CBC started to evolve in the 1980s when scientists saw the need to incorporate human welfare into conservation. Traditional conservation methods involve creating protected areas off limits to humans, but despite having more protected areas in the world today than we’ve ever had, we continue to lose species and habitats at an alarming rate. Conservationists and social scientists are realizing that displacing local people from their homes to create protected areas is not effective. Instead, teaching local people to coexist with wildlife and the resources they share has had better results. 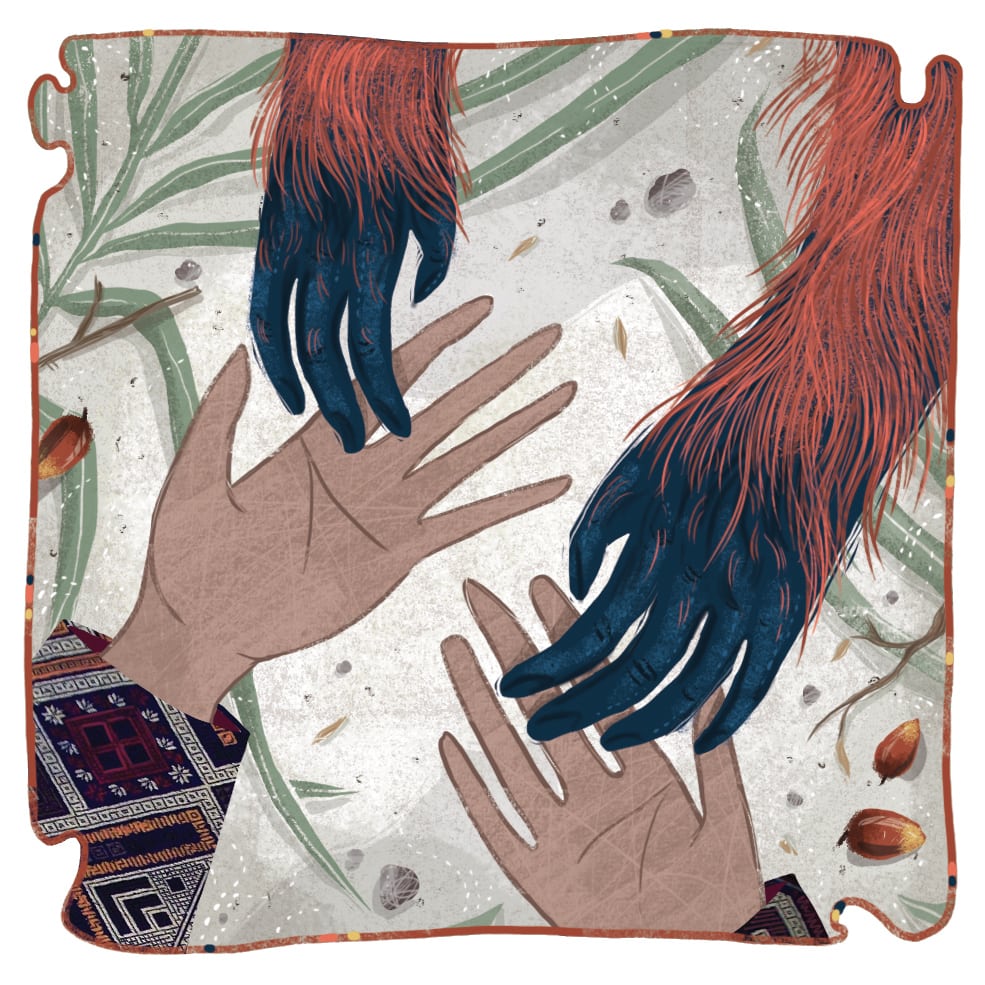 A community-based approach can be changed to address threats and create solutions for the many different landscapes, cultures, species, and communities in need of help. CBC programs are currently succeeding for various species in multiple countries including the black rhinoceros in Namibia, cotton-top tamarin in Colombia, and Grevy’s zebra in Kenya. Despite some success, for conservation to become a social priority more people need to understand that conserving their native environment is in their best interest and that without nature, people cannot survive.

CBC efforts for orangutans; are they effective?

To conserve native species and their habitats, it is imperative that humans coexist with orangutans and other wildlife. Coexisting not only benefits the native species but also the native peoples. Without seed-dispensing orangutans, the forests people depend on would not thrive, the tourism industry imperative to the economy would collapse, and Indonesia’s most iconic species would disappear. Currently, conservationists use four main strategies to address threats to orangutans: fighting illegal trade and poaching, managing protected habitat, establishing orangutan friendly management in areas such as palm oil plantations, and rehabilitating and releasing orphaned and injured orangutans. All of these strategies involve some form of community-based conservation as local communities move closer to the last patches of forests left in Borneo and Sumatra.

Palm oil is a very profitable crop; it is widely used and has created many jobs which have improved the lives of poor communities as many plantation owners provide their workers with healthcare, salaries, housing, and schooling. Despite having some benefits, it is the leading cause of deforestation in Southeast Asia and the biggest threat to the survival of orangutans. To help reduce the destruction caused by palm oil plantations on the ecosystem a non-profit organization called the Roundtable on Sustainable Palm Oil (RSPO) was established in 2004. RSPO provides financial incentives to boost the growth of sustainable palm oil worldwide and includes members from plantation companies, manufacturers of palm oil products, retailers, banks and investors, and environmental and social NGOs. RSPO has created a list of environmental and social criteria that must be met by companies in order for their palm oil to be considered ‘sustainable.’ These guidelines help to minimize the destructive nature of palm oil plantations on both the environment and local communities in the region.

There are many branches to the RSPO non-profit; one of these involves community-based programs that provide tools and education to the local communities. In Indonesia, RSPO certifies small plantation owners so they have the knowledge and ability to produce more palm oil using less land. RSPO gives the farmers the opportunity to raise their income by offering access to training, education, and funding that allows them to provide for their families while helping to protect biodiversity in the region. The RSPO community-based programs benefit the local people by providing many resources to better their families and livelihoods while working to create more sustainable practices to protect the environment now and for the future.

Education and empowerment in the community

Community environmental education (CEE) and community empowerment strategies are both powerful tools used in CBC efforts in Southeast Asia. Both strategies encourage local communities to become involved in managing their natural resources in ways that benefit them and their environment. Education is one of the most powerful tools in conservation as it allows people to gain awareness, skills, and knowledge, while providing opportunities to participate in decision-making. Once people understand their environment and are aware of how its problems affect them, they are more motivated to work towards finding solutions that better their community and support the wildlife they cohabitate with.

Hutan, a french NGO based in Sabah, Malaysian Borneo is one of the successful CBC programs supporting orangutan conservation. Beginning in 1996, Dr. Marc Ancrenaz and Dr. Isabelle Lackman have spent over twenty years in Sabah trying to build the trust of the locals while working to conserve the area’s wildlife. They partnered with the Sabah Wildlife Department to create The Kinabatangan Orangutan Conservation Project (KOCP) and after eventually gaining the local people’s trust, they got them involved in the conservation efforts. Hutan-KOCP integrate scientific research, community engagement, education, and capacity building to conserve the wildlife living within and around the Kinabatangan Wildlife Sanctuary. They involve the local community in every aspect of their program from hiring local people to monitor the native wildlife, manage the sanctuary, collect scientific data, and conduct anti-poaching patrols, to holding community meetings, offering environmental education classes, and awarding the community exclusive rights to develop ecotourism within the sanctuary, including a homestay program in the village. Since the program’s establishment, there has been a significant decline in the unsustainable use of forest resources and an increased understanding of the importance of protecting the rainforest and its wildlife. A program called the Wildlife Wardens gives eighteen highly trained local people the power to arrest poachers and illegal loggers, allowing them to have a hand in protecting the natural resources and wildlife they depend on. So far, the programs and opportunities Hutan-KOCP provide have been effective in engaging the local people in sustainable behavior, creating a sense of pride in the community, boosting the local economy, and has created 26,000 ha of protected forests in the area.

CBC largely depends on the willingness of the local community or village to take responsibility to preserve and protect their natural resources. Successful CBC projects have two things in common: they work at a community scale, and the community has been properly prepared to manage the project or most aspects of it on their own. A community-based program is considered successful if there is a change in human behavior over time and the local communities show the ability to sustain the conservation project with little or no oversight from the NGOs. To be successful, NGOs must provide more than just information and awareness of sustainable practices; they must offer new skills and give communities the opportunity to practice new behaviors and take action themselves.

Due to their charismatic nature and similarity to humans, orangutans have become the ambassador species for conservation in the battle against unsustainable palm oil and deforestation in Indonesia. Local communities have to be dedicated to protecting the only great ape living in Southeast Asia and work collaboratively with NGOs to ensure they are around for the future. Conserving biodiversity can only be achieved through changing human behavior, as humans are the main cause of biodiversity loss, to begin with. To change human behavior, understanding the needs and wants of the community is important. Tools and programs such as RSPO, education, alternative livelihoods, and creating a sense of pride in the communities are used by NGOs try and protect the last populations of orangutans in Indonesia.

Katie Badowski is a graduate student at Miami University studying biology with a focus in wildlife conservation. During her master’s coursework she spent time in Sabah, Borneo working on community-based conservation projects involving orangutans, reforestation, and community education.  She completed this project as a part of her graduate work with Project Dragonfly at Miami University in Oxford, Ohio in conjunction with San Diego Zoo Global.