An inclusive method to measure impact of noise on marine mammals 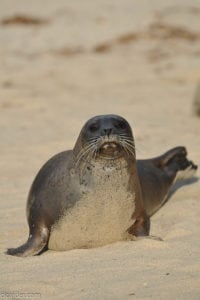 Harbour seals (Phoca vitulina) pick out familiar resting spots, mostly rocky areas where they are protected from adverse weather conditions and predation, near a foraging area.

Noise from ships and coastal industries is capable of traveling miles underwater and scientists have found that, in many ways, this affects marine mammals. They used to consistently record the amplitude of a sound when produced and drew concentric ‘zones of influence’ around it, thus measuring the potential effects of the sound on an animal. However, they had not taken into account some other equally important factors (read on to know what they are). Luckily, some scientists  have taken the hint from a few earlier studies.

In one study, harbor seals were played sounds of local fish-eating killer whales, and they barely shrugged their shoulders. But when migrant mammal-eating killer whale sounds were played, the seals reacted strongly. In another study, sonar signals were relayed from a stationary ship en route of migrating gray whales. They moved around the ship and avoided it. But when the ship was moved two kilometers away, even though the sound levels remained the same, the whales didn’t seem affected and continued on their original path. Clearly there was more to this than just the intensity of sound produced.

So, Ellison and colleagues proposed a new method to better assess the effects of sound on marine mammals. This approach includes contextual factors that were not taken into account earlier, such as the influence of distance between the sound source and the animal, whether the animal had heard the sound before and recognised or learnt it and whether the sound was similar to natural sounds like that of an enemy. They call for similar inclusive assessments that will help in more efficient management of all the noise we create.

Divya Ramesh is a staff writer at Current Conservation.divyaram23@gmail.com