Coral Reefs of the land 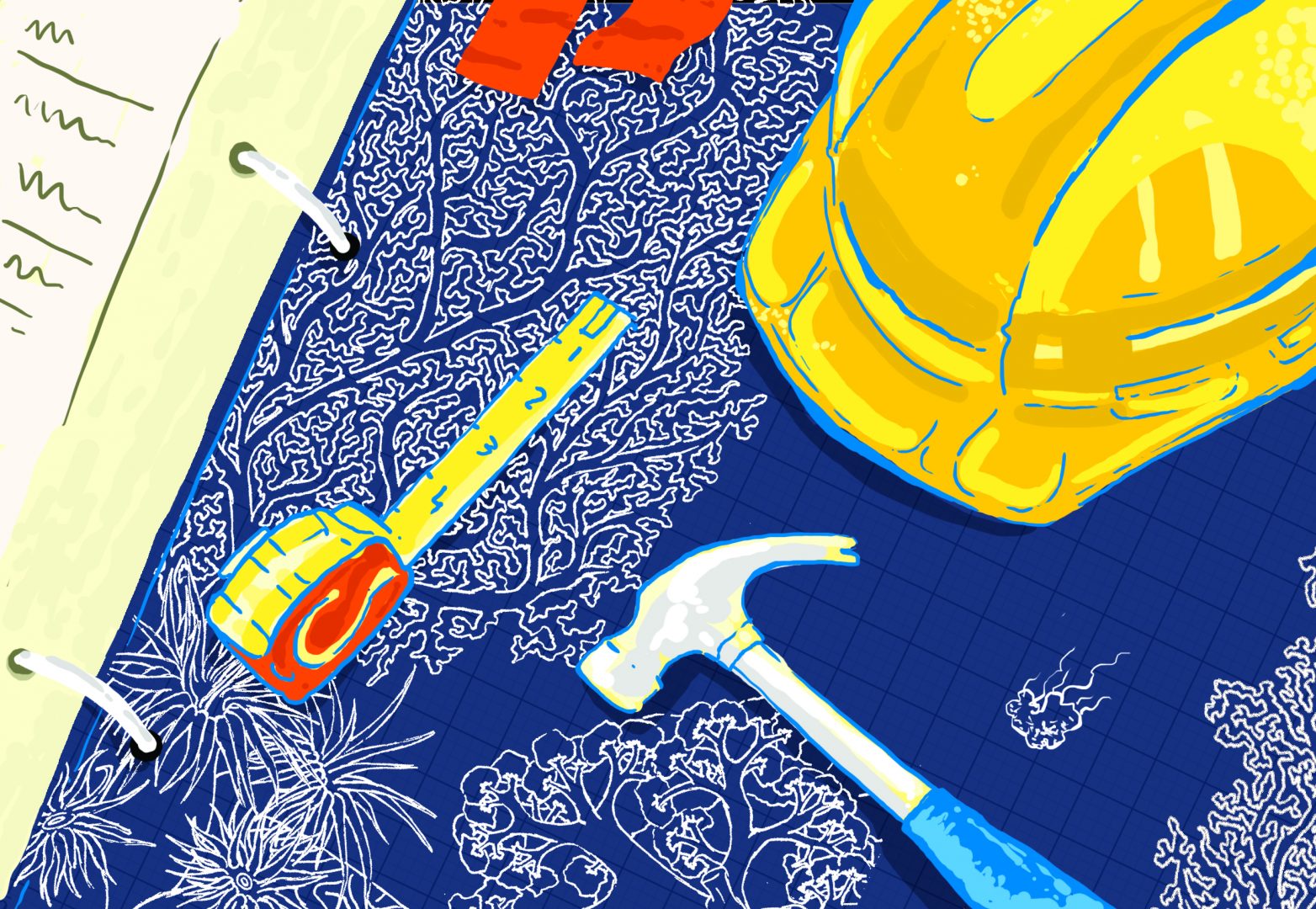 It is a hard nonliving complex three-dimensional structure built by living beings, often covering extensive areas of habitat, and unlike anything else naturally found in the vicinity. It is a product of the labor of an organism which has evolved to transform the materials in its surroundings into a protective home for its progeny and itself. It is built in layers, growing upon itself as its occupants continue to build it over generations. It does the job of protecting its inhabitants well enough to outlast them, standing firm over scores of generations and thousands of years. It helps concentrate the flow of energy and materials from its surroundings to make life more efficient for its denizens, sometimes thriving even in places that otherwise seem deserted. It not only provides shelter and resources and a supply of energy to the species that built it, but also supports a wider range of other species that may come seeking its riches and adapt to new ways of making a living in this strange new construction. Its appearance, color and occupants vary from one part of the world to another. It is large enough in some places to be visible from space. It is resilient to a surprisingly wide range of environmental variation, yet vulnerable to catastrophic collapse under conditions such as rising sea levels and warming ocean temperatures. And even when it collapses and is no longer able to support its creators and main occupants, it continues to loom in its place, casting shadows deep into history, until the patient forces of water and wind and temperature wear it down and its remains wash up on some shoreline in the sands of time.

It is a Coral Reef, built by ingenious, soft-bodied, tough little creatures that can scarcely survive on their own in the vast ocean outside its protections. It is a City, also built by ingenious creatures with bodies softened by civilization, too clever by half, but creative and tough as hell and who may also struggle to survive outside the city walls.

Coral reefs are ecosystems rich in biodiversity, often concentrating biological productivity and wealth amid relatively poor waters. Coral reefs are described as rainforests of the ocean harboring as much, if not more, biodiversity underwater as tropical rainforests do on land. They stick out in the underwater landscape as distinctly as forests full of tall trees do in terrestrial landscapes, marvelously unlike anything around them, but teeming with a richness of diverse marine organisms that have evolved to be uniquely adapted to life in the coral reef, lured by its richness to tie their evolutionary fate to that of the reef itself. 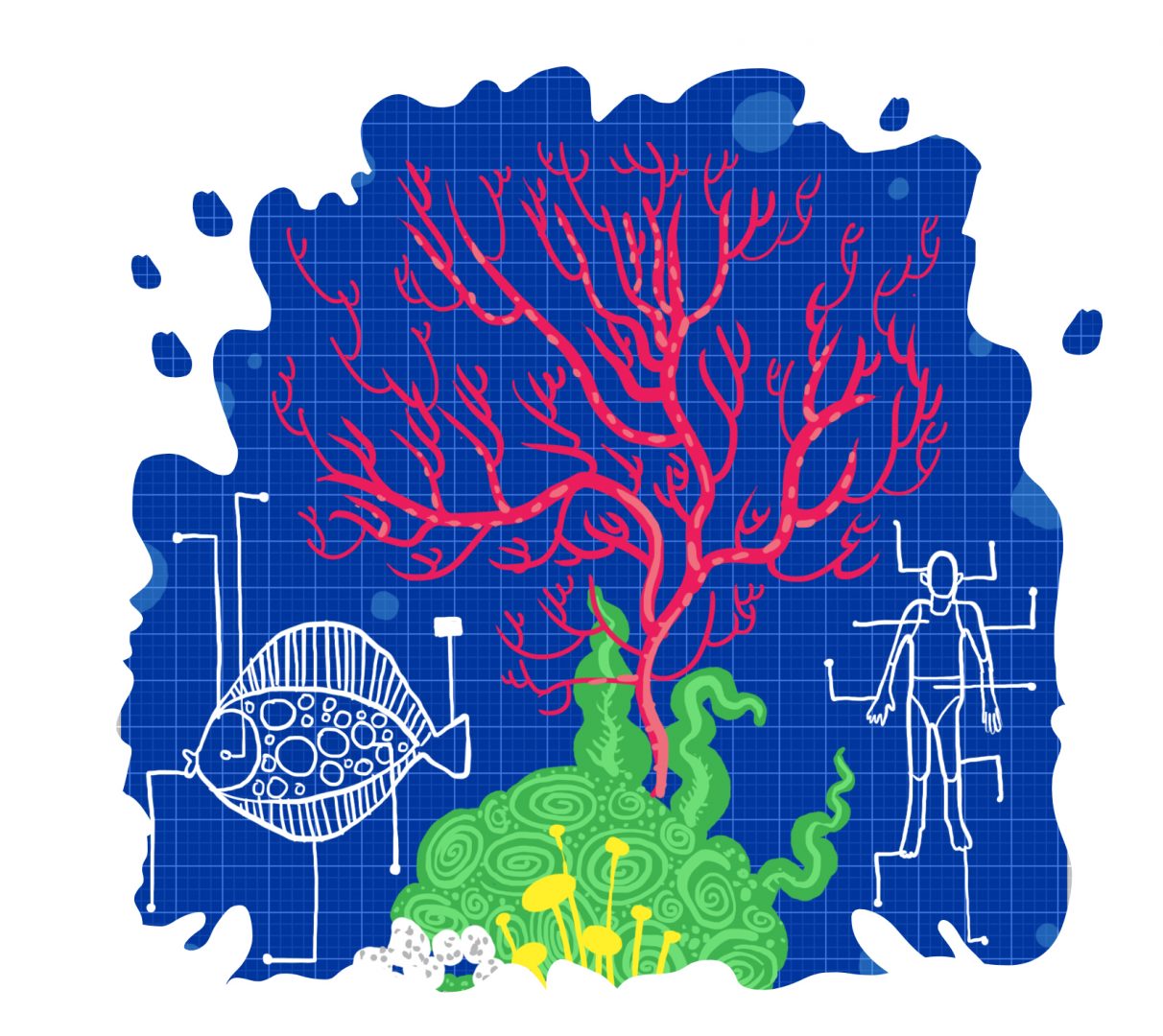 It may seem odd, but coral reefs are also often likened to cities. The City, that quintessential “artificial” construction by human beings alienated from nature, symbolic of how we pave over natural ecosystems, is often used as a metaphor to understand and explain the complexity of coral reefs. There are children’s picture books full of wonderful artwork that explain how coral reefs function much like cities. Tall structures rise up from the ocean floor like skyscrapers. Schools of fish and molluscs and crustaceans scuttle about busily, commuting among productive nooks and crannies where they can feed, nest, and raise babies securely. Diverse species evolve to specialise in different tasks, much like how medieval guilds of craftsmen and workers divided up human labor to make it more efficient, enabling us to produce wonders of art, craft, and technology—diverse, creative, and sometimes horrific.

We have never debated whether coral reefs are complex ecosystems in their own right, worthy of protection. We should also be long past debating whether cities are ecosystems. Of course they are, unique ones described in much of the recent literature as complex social-ecological systems, because we like to pull the human social elements apart from the “natural” in our Cartesian ways of thinking. A much more interesting exercise is to ask what kind of ecosystems cities can be rather than worrying about how unnatural a blight they are on more “natural” landscapes.

As they stand, unlike coral reefs, cities are not founts of biological diversity amid less diverse landscapes. In the relatively short timespan of human history, cities have become known more for destroying biodiversity rather than enhancing it.  More recent work in urban ecology has found a surprisingly high diversity of species in many of our cities. Do cities destroy other habitats and ecosystems? Of course. Do cities cause local extinctions of many species? Undoubtedly. We never built them as habitats for any species other than ourselves. Indeed it would seem that we build cities as places where we seek refuge from “nature” in all its vagaries and its “red in tooth and claw” horrors. Yet, we also bring a lot of that nature, and many other species, with us into the city—planting some in our gardens, growing others on our walls and balconies, feeding and watering many with intent or benign neglect, and willingly or unwittingly sharing the bounty of resources we concentrate for ourselves in cities. We know now that we depend on many of these other species for food, water and air, for our bodies and our minds, and for our culture and artistic inspiration—even though we never built cities for anyone but our own selves. Just like the mindless tiny organisms that build coral reefs.

But unlike the coral organisms, we have minds capable of reflecting on our own actions, and of imagining different futures. Imagine building cities more intentionally like coral reefs on land. The oldest cities are just a few thousand years old—an order of magnitude younger than the oldest coral reefs. That deeper span of time has allowed coral reefs to evolve into the diverse ecosystems we now celebrate and whose decline through our actions we dread and lament. Yet, to borrow that tortured phrase from urban land developers, the coral organisms simply built their little shelters, and they came: all the diverse algae and plankton and fish and mollusks and crustaceans in the ocean to evolve together into a diverse ecosystem thriving under the ocean. A growing body of research on urban wildlife is now showing us that many species on land come into our cities once we build them, so long as we leave enough of our surplus of resources for them. Recognising the value of nature and wildlife, the biological and cultural ecosystem services they provide us in the current jargon, we are also actively bringing other species into our cities. Why not go all the way and reimagine our cities as bustling diverse coral reefs on land?

Surely, if we build cities with intention, with niches full of unique resources, many other species will come on their own, and over time will adapt and evolve into unique urban creatures, tying their fates to ours just like the house sparrow or the chimney swift have already done. Even underwater, our artefacts, like sunken ships, can act as surrogates for species fleeing damaged coral reefs, and are being used intentionally to restore reef ecosystems threatened by warming oceans and rising seas. It is not hard to imagine some of our major coastal cities also turning into such surrogate reefs as they submerge under the rising oceans. So let us reimagine and reinvent our cities as terrestrial reefs, as rich and full of other species as we can learn to coexist with, becoming not just their competitors and killers, but also their gardeners and nurturers and symbionts. Let us think as deep into the future as the coral reefs teach us about the past, and turn the metaphor of the coral reef as a city into the real city as a coral reef, diverse and resilient and full of evolutionary ferment to match the tides of our changing world.

Madhusudan Katti is Associate Professor for Leadership in Public Science in the Department of Forestry & Environmental Resources at North Carolina State University, Raleigh, North Carolina, USA. He studies how an evolutionary understanding of cities as social-ecological systems can help us reconcile nature and biodiversity conservation with human development.