Corals or Cola: between the devil and the deep blue sea 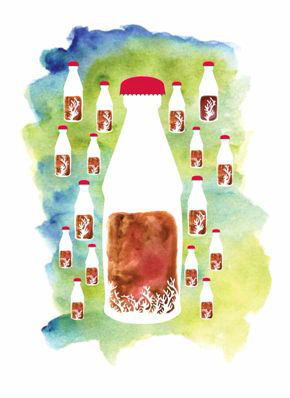 Ocean-going vessels, which can account for the movement of 7,000-10,000 species at a time, are the single most important pathway for the dispersal of marine organisms. In addition, the intentional introduction of species for aquaculture is becoming an important mode of spread of potentially invasive species. One such species introduced to India is the seaweed Kappaphycus alvarezii.

K.alvarezii was first introduced by the Central Salt and Marine Research Institute to Gujarat, in 1993, and later to Mandapam, in 1995, for large-scale commercial culture. K. alvarezii is used to produce the gelling agent, kappa carrageenan, which, in turn, is used in industrial gums, and in products such as soft drinks. The entrepreneurial venture of seaweed cultivation was undertaken by Pepsi Foods Limited (PFL) along with the Central Salt and Marine Chemicals Research Institute (CSMCRI) as a livelihood option for Self Help Groups (SHG) on an attractive buy-back arrangement. Large -scale culture of the species began in 2001 in the Palk Bay waters of Mandapam (which supports coral reefs and seagrass beds). By this time, the species had been classified as an invasive species and had wreaked havoc in the reefs of the Hawaiian and Caribbean islands. At the Kaneohe Bay, Hawaii, the alga is spreading at the rate of about 260 metres per year, and covers 50% of the benthic substrate in many areas. It can grow over, smother, and prevent fresh establishment by both coral larvae, and other benthic invertebrates and its invasive potential and ability to re-grow has aroused the concern of researchers.

Recent studies and our own in situ observations have shown that the species has spread to the marine protected areas within the Gulf of Mannar Biosphere Reserve. The alga is growing extensively on the branching coral colonies of Acropora formosa and A. nobilis, smothering the corals beneath. We found that all coral polyps below the algal mat were dead. The alga grows so densely and compactly on the coral colonies that, once well-established, it is impossible to separate the alga from the coral colony without causing severe damage or breaking. If left unchecked, and if no immediate remedial action is taken, the alga could well spread to other parts of the marine protected area and lead to large-scale ecosystem phase shifts and undermine the functionality of coral reefs. Some scientists (including Dr. APJ Abdul Kalam, former President of India), have hailed Kappaphycus cultivation as an important alternate livelihood option for communities.The culture of the alga is a lucrative activity and comes with a promising buy-back package, and central and state government support.

The entire issue of K. alvarezii raises questions about the integrity and responsibilities of science, scientists and people in power. While the idea of introducing K. alvarezii to provide a livelihood alternative for resource-dependent communities is certainly well-intended, the scientific information and research to support and justify its introduction is weak and unsubstantiated. #e most audacious justification so far provided for the introduction of K. alvarezii was the discovery of a few strands of the species in the Andaman and Nicobar islands, leading to its being declared a native species.

If immediate measures are not undertaken to check the spread of large-scale culture, at least till the species is conclusively proven to be harmless, it could lead to complications in future management. With more people depending on the seaweed for livelihoods, conflicts could evolve if management policies are to be put in place.

Naveen Namboothri is a Post Doctoral Fellow at the Centre for Ecological Sciences, Indian Institute of Science, Bangalore, India. Mail at naveen.namboo@gmail.com

Kartik Shanker is an Associate Professor at the Centre for Ecological Sciences, Indian Institute of Science, Bangalore, India.