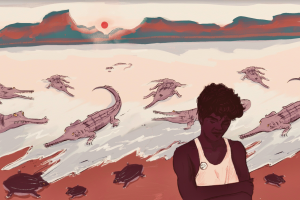 Rajamani, an Irula snake hunter in his early 20s was my field assistant and a special friend with a great sense of humour. Though he wasn’t “book educated” (having only studied till Standard 3 in school), he was eager to learn about the world outside of his tribe – the Irula people. Since he knew only Tamil, I usually had to be his interpreter up north, with my rudimentary Hindi.

In our travels, there were long walks along the highway when we couldn’t get a ride. Once Rajamani found some tracks of a snake going into a termite mound. He dug for about 20 minutes and pulled out a 6 feet long banded krait, a snake he had never seen before since they are found only up north.

The year was 1973 and I had a grant from World Wildlife Fund India for Rs. 3,000 to do a preliminary crocodile survey. I knew the money wouldn’t take us too far but crocs in India had been badly hammered for skins, eggs, meat, and their unfortunately exaggerated reputation as human eaters. They were also losing their habitat. Rajamani and I headed up north and stood on the Agra highway hoping for a ride.

It was late evening, when we got off on the outskirts of Indore. We curled up in a nearby park with jackals howling around us. The only croc distribution data we had was from old hunting books and of course, the Journal of the Bombay Natural History Society. Shortt’s Hints on Crocodile Shooting published in 1922, provided us with a list of places along the Ganges river where ‘good sport could be had’ as long as you could get close enough for an instantly fatal shot. Any basking croc that was merely wounded would disappear into the water and “the trophy” would be lost.

Talking to some of the old tannery owners in Kanpur and later in Allahabad, it was clear that crocs were no longer to be found in those old hunting areas. Both mugger and gharial had been hammered so bad that most of the sacred Ganges were virtually free of them. A member of one of Rajasthan’s royal families who also happened to be an old hunter told us that the last place to see gharial and mugger was on the Chambal River which runs through Rajasthan, Uttar Pradesh and Madhya Pradesh. So Rajamani and I set out for Dholpur, Rajasthan with a somewhat cryptic warning that it was a pretty dangerous place.

A Conservator of Forests advised us not to go because of dacoits who were at large then. I guess our well wishers were thinking, “This tall white guy and short dark man would be easy targets”. I explained what dacoits are to Rajamani and he looked suitably impressed. We stood on yet another busy highway looking for a ride to Morena.

A kind soul, working for the Public Works Department, had somehow heard of the Madras Snake Park and was happy to help the oddball American who started it. He drove us to Rajghat, the bridge across the Chambal River in his official jeep, determined to show us gharial. Lo and behold there were half a dozen of the crocodilians basking on a sand bank, the first wild ones we had ever seen. Later we spent the day walking along the banks of the Chambal counting gharial tracks, getting startled at the sight and spoor of a huge Chitra softshell turtle and finally seeing a group of basking gharials accompanied by a large Ganges softshell turtle. Rajamani showed me where several turtles had laid eggs but in every case the nest had been dug up, some by jackals and some by mongooses. We were actually somewhat disappointed that we hadn’t run into any dacoits!

By the time we headed east from the Chambal we were almost out of money. There was enough to buy a bit of food but nothing for travel, so we started hitchhiking again. After a couple of rides with lorry drivers, we reached Hazaribagh.

The next day we headed south for Orissa but no one would slow down for us on the highway. We walked until we reached the edge of Hazaribagh National Park. Rajamani called me over and pointed out very obvious snake tracks disappearing into one of the large holes at the base of a large termite mound. “Kattu virian” he said, a krait had gone in the night before. We just had a small crow bar (that essential tool of the Irulas) with us, but Rajamani couldn’t resist digging into the mound to see this krait. With the skill that only the Irula have at digging, meticulously cutting roots and scooping out the dirt with one hand, Rajamani was soon well into the mound and suddenly jumped back. “Yena pambu ithe?” he asked (“what kind of snake is it?”). I gasped as I saw the bright yellow and black bands of a two-metre long banded krait emerging from the hole, no doubt very offended to be disturbed during his sleep period. As we watched the gorgeous snake search for another hole to escape into I explained to Rajamani that this was the banded krait, a snake we don’t have in the deep south, but probably one of the most ‘showy’ snakes in existence. The snake entered another hole in the mound and disappeared from sight. 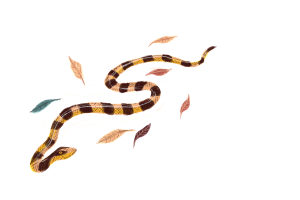 This was just one of the many varied experiences I shared with Rajamani. Come to think of it, up there in north India we must have appeared to be a pretty weird pair, this long haired whitey from New York and the short tribal man from Tamil Nadu.

One evening we sat down to talk with a sadhu under a banyan tree on the outskirts of Kota, Rajasthan, the day before our gharial survey along the Chambal. The sadhu was ‘massowing’ a ball of ganja along with beedi tobacco in his palm, sprinkling a little bit of water to make it pasty. We watched as he picked up his clay chillum and placed a little stone inside. “This is the gitak”, he said and emptied his palm of ingredients into the chillum. “And this is the safi.”, wrapping a piece of damp coloured cloth around the base of the pipe. He put a piece of burning coconut fibre rope on top of the chillum, took a couple of deep puffs to get it going well and handed the chillum to me. I held it clumsily and managed to get a puff down without coughing too much and handed the pipe to Rajamani who had much more finesse. It was getting dark when we left the sadhu in clouds of smoke with a bow and a thank you. As we walked down the road, everything seemed to have a silver lining under the street lights. Rajamani pointed at the man across the street with a bald head and said “Atho, aamai paar!” (There, look at the turtle) and indeed that shiny head looked just like a turtle shell gleaming in the sun. We both giggled uncontrollably.

Romulus Whitaker is an Indian of American origin who has a lifelong obsession with reptiles.

Upasana Agarwal is an illustrator based out of Kolkata. When they’re not drawing they organise a LGBTQ art space in the city. Their work is largely influenced by the nostalgia and history of urban landscapes and the fabric of life that ties them together. They are obsessed with tea, cats and plants.