Diminishing colours on the food palette?: Reflections on lost diversity of foods in West Sikkim, India

In the 2000s, Sikkim banned its traditional pastoral practice in parts of the state due to ‘serious degradation’ of forests. This inevitably led to a loss of livelihoods and economic inequality between different groups. Perhaps the ban did lead to regeneration of forests where grazing used to take place. However, proof for this or that there was loss in forest cover before, is sparsely documented in scientific studies. Despite the absence of such studies, there remain entrenched views on the ‘unsustainable and backward’ practice of pastoralism.

Sikkim’s Organic Mission launched in 2015 was another policy that embellished the state government’s green image. This is, by any standards, a massive achievement since Sikkim is the first fully organic state of India that had completely stopped the use of chemical fertilisers for ten years before the policy came into being. However, a large population of its farmers who are below the poverty line (BPL) are still largely rice-fed by non-organic produce from outside, under the Public Distribution System.

Also, the earlier ban on grazing in forests stopped the production of large amounts of cattle dung required as manure to practice organic farming. Herds that numbered over 40 were collectively owned by two or three families, had to be sold. Today they have shrunk to 2-5 stall-fed animals depending on the activities the villagers choose to engage in. Faced with high rates of unemployment, the ban also triggered the movement of the younger population to urban areas for education and jobs.

These changes are best understood through a specific case, the Semba villages in West Sikkim, where I conducted a study in November 2016. The first agro-pastoral families migrated to Semba from Nepal in the 1960s when Sikkim was still a kingdom and the forest was not a designated national park. Sikkim went through a major shift in policies when it became a part of democratic India in 1975. These were amongst the regions that came under the grazing ban.

With a population of about 300, Semba is situated atop the Eastern Himalayas in India, disconnected from roads. Thus, all activities are conducted on foot. The villages lie close to the Kanchendzonga National Park (KNP), which is home to 36 species of rhododendron flowers and sometimes gives lucky trekkers a glimpse of the red panda.

With very apparent differences in altitude, temperature and livelihoods, Semba can be split into upland and lowland areas. The lowland is mainly covered in large cardamom crops as far as the eye can see, invading the kitchen gardens of residents who have planted them. This spice has a global demand and can sometimes earn farmers big money. However, fluctuating prices and recurring disease in the crops put farmers under constant threat.

The upland, covered in clouds at all times, grows vegetables and has larger numbers of livestock compared to the lowland. One cannot grow large cardamom here due to the colder climate. The upland is also closer to the forests. This drives a considerable difference between the earnings as does the landholding size. Land availability decreases with increase in altitude and cost of carrying head-loads goes up as distance from markets increases.

The changes experienced in Semba’s agricultural development in the last three decades have emerged due to several cross-scale interactions. The first was a shift from subsistence to commercial agriculture. The second, reduced livestock population owned by communities, and the third, restricted access of communities to forests. The overall result is a reduction in the diversity of food and food sources, and increasing dependence of communities on external markets and government subsidies for food and income. The main sources of food used to be subsistence agriculture, livestock husbandry and forest foraging which do not provide the same services anymore. A ‘food plate’ exercise with older community members to compare daily meals from 25-30 years ago revealed that the only item bought from the markets in the past was salt. The rest of the ingredients were available in the villages. The variety of foods had changed over time too and the current food was perceived to be less nutritious.

The careful mixing of colours on the old palette

Back in the day, yak and other livestock grazed in the forests of the now Kanchendzonga National Park (KNP) in West Sikkim. This pastoral tradition, known as the gothwala system enabled the pastoralists to practice subsistence agriculture. The monarchic rule allowed this under an elaborate tax system, the regulation of which is not very well known. The cattle dung which was rich in forest nutrients served as manure for an array of crops grown by the mountain communities. The benefits of dietary diversity obtained from the integrated practice of livestock herding in forests and agriculture have been documented. For example, dung obtained from grazing in forests as opposed to stall feeding indirectly contributes to dietary diversity through biomass flows. So does increased availability of manure, that increases the diversity of home gardens.

The variety of crops depended on land holding size and time available aside from that spent in the goth or tending the cattle in forests. Crops included mustard, wheat, buckwheat, barley, maize and millets. Mustard was used to prepare cooking oil. Millet was used to make the famous chaang, a fermented alcoholic beverage, and flour for pancakes. Maize was used to make popcorn. From the dairy itself, communities made curd, churpi or dried cheese, and ghee or fat which they also used to sell. Meat was also an obvious by-product. While having access to forests, communities had developed the skill and knowledge to forage for fruit like kawlo and banta, wild mushrooms, wild saag, laipatta, bamboo shoots, and wild garlic among other herbs and plants with medicinal values. Wild deer was also hunted for meat. Wax from oak trees was used for making tea. While some of these practices continue, they have diminished greatly.

Wild vs. the tame

When Sikkim came under the constitutional framework of India, the Wildlife (Protection) Act, 1972 became applicable. This along with the declaration of KNP in 1977, made it harder for communities to access forests. Following this, with an increase in human population and the opening of new markets over time as Sikkim became integrated with India, the demand for cattle products increased. To save the forests from overgrazing, the government passed a ban on selective parts of Sikkim in 1998. The Semba communities shifted to commercial farming from subsistence, and the upland communities suffered greater losses than the lowland ones, resulting in economic inequality. 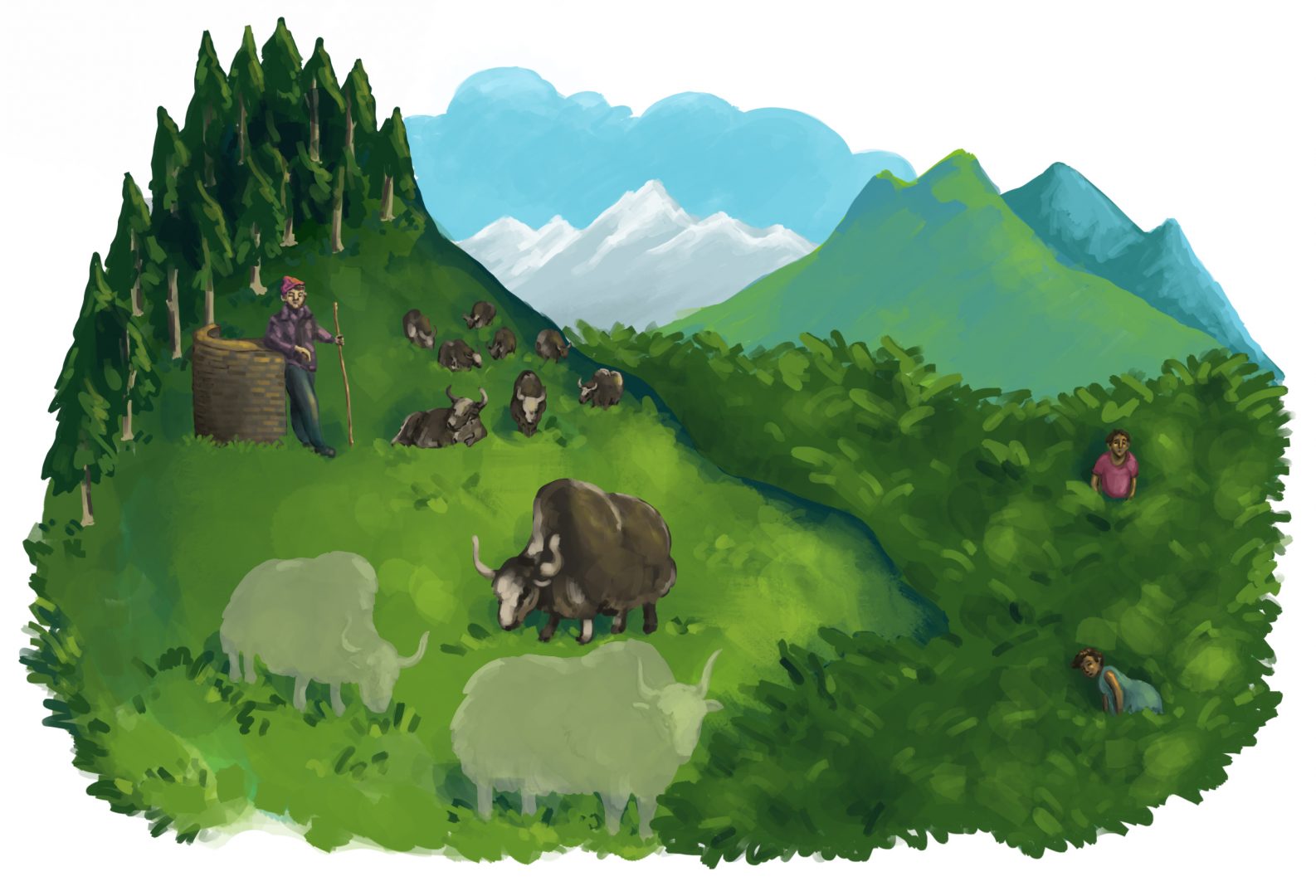 This came about because while cardamom can be grown in the lowland areas, the upland climate does not support it. Government policies together with growing market demand for large cardamom has also pushed aside the practise of subsistence farming. In Semba villages, 60% of MGNREGA funds are used for daily labour wages for those who work in the farms and, and 40% for buying high yielding large cardamom seeds. Water sprinklers have been distributed under Rashtriya Sinchayee Yojana, to expand cardamom plantations which could earlier thrive only close to water bodies and under the shade of trees. Local seeds are replaced by hybrid varieties that are issued by the central government, thousands of which are wasted every year as they are not suited to local conditions.

Interactions between people, ecology and economy work in non-linear ways. When development policies are designed, the history and context of a system matter. The Public Distribution System was first created in the 1940s before India became independent. After the merger of Sikkim with India, BPL ration card holders could claim 35kg of free rice, per family, per month. An upland resident recalled the time they first started to receive subsidised rice and described it as the moon rising on a dark night. While the policy can help save money and/or provide food security, farmers may feel no need to grow food when the government gives rice almost free of cost. The rise of external markets in conjunction with subsidised rice make it easier to buy rather than grow. For example, mustard oil which was produced at homes is now replaced with refined oil from the markets. 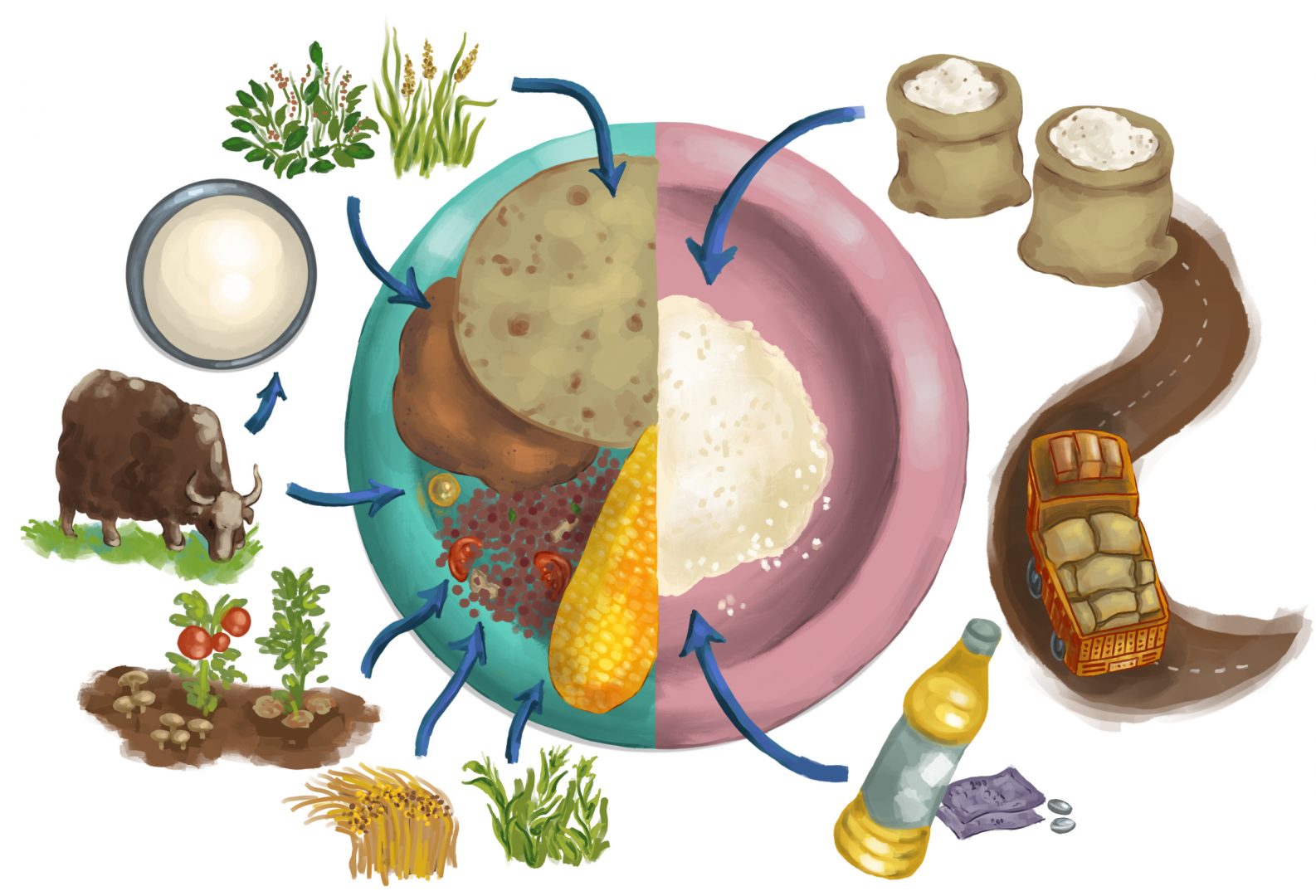 This has probably interacted with the increasing need for money, which encourages commercial farming over the ‘toilsome practice’ of subsistence farming. The staple of Semba villages has shifted to rice from the various millets, wheat, buckwheat, maize and barley.

Semba’s sarpanch is concerned about the future of his children, saying, “if there’s a strike, a war in the future, and the rice stops coming from outside then [the children] should learn the practice of agriculture. Right now the rice comes from Siliguri, it’s not grown here.”

In a nutshell, the social-ecological system of Semba is faced with high vulnerability. Its diverse foods were lost as their sources diminished in one way or another and the communities have become increasingly dependent on government subsidies and external markets. The lost diversity is largely caused by the disintegration of subsistence farming, livestock grazing and forest foraging, that were all deeply connected to each other. These changes have probably come at the cost of nutritional decline in diets, as dietary diversity loss can reduce micronutrient adequacy. There is evidence that literacy has gone up and standard of living across Sikkim is better than the past. But has it come at the cost of long term resilience?

Why do colours on the palette matter?

Semba villages are not the only ones losing diversity and becoming dependent on far off sources. Parts of central India and Odisha have also come under the homogenous distribution systems, making a switch to a more rice-based diet and losing local varieties, respectively. The replacement of subsistence foods with imported market products causes a disconnect between diets and food sources. This depleting diversity of foods also results in a loss of knowledge that help to harvest or cultivate, produce and use them. With increasing droughts and resistance to disease in crops, several factors that govern marginal and small- scale farming communities need to be considered.

Keeping or providing options gives freedom of choice as well as the ability to fall back   on substitutes when other options fail. It is like an ability to choose from a colourful palette and paint one’s own future in terms of food diversity and choice. Acknowledging the diversity of individual social-ecological systems should be a key consideration while creating policy.

Studying interactions across time and different geographical scales can greatly inform policy. Conservation of forests and economic development are not individual end goals. They are parts of a larger painting that can ensure Sikkim’s food security.

*Semba is a replacement for the original name to maintain the anonymity of interview participants for ethical reasons.

Radhika Gupta has a Master’s in Social Ecological Resilience for Sustainable Development from the Stockholm Resilience Centre. She is interested in science communications and dialogue-based multi-stakeholder engagement.

Ladyfingers Co. is a communication design studio with a fun and sensitive approach, based in Bangalore, Mumbai and Kolkata. At their core, they believe in making communication relevant to context and culture.