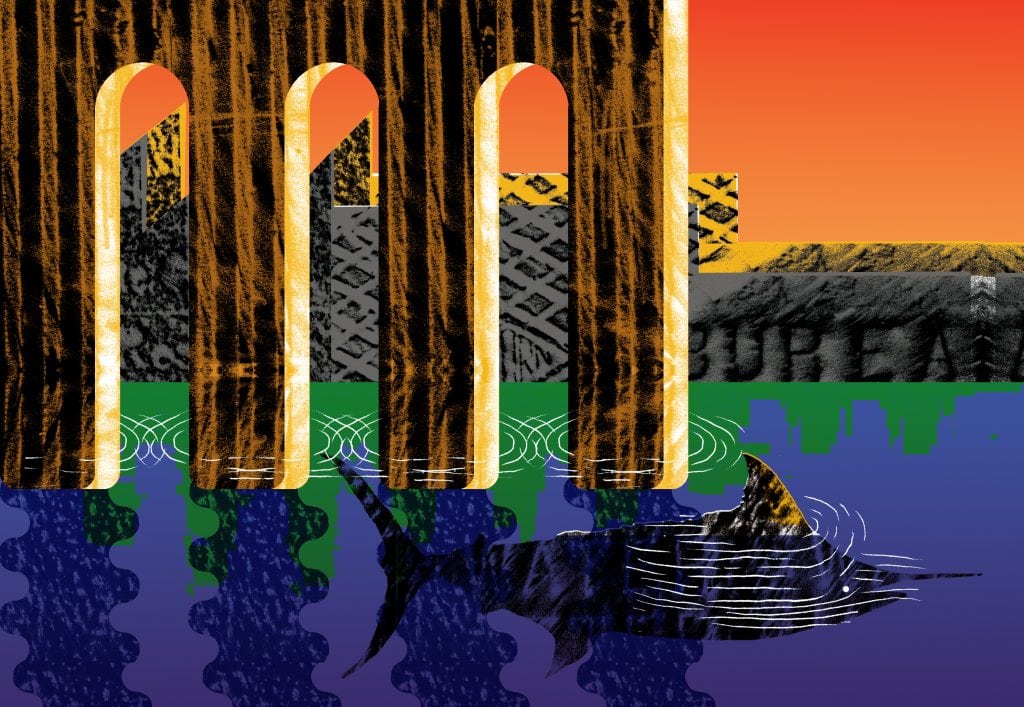 The shaky video shows the arc of its tail scything through brown water as the Black Marlin swims through the creek, hunting bream and tailor. The phone camera pans around and the built structures of the Port Kembla steelworks frame the scene, heavy trucks rolling over a concrete bridge, smokestacks and factories crowding the landscape. The most polluted creek in the Illawarra region of south-east Australia, Allens Creek flows through the steelworks, its banks lined with concrete and weeds, its waters littered with plastic, broken glass and rusting steel. Recently steelworkers watched amazed as that Black Marlin hunted in the shallow waters inside the steelworks itself.

The Black Marlin is an apex predator of oceanic environments, a wide ranging ocean swimmer that can grow to 800 kilograms. Regarded as the premier game fish amongst anglers, they epitomise the oceanic wild – fast, powerful and beautiful. The waters and banks of Allens Creek are a complex amalgam of industry, abandonment, toxicity, flourishing and decline. From the position of the dominant material logics of power and capital, these are the increasingly forgotten, ignored or avoided places. The presence and agency of the Black Marlin in the middle of the steelworks bring into focus debates about the nature of nature in the twenty first century. The giant ocean fish swims into the heart of industrial Port Kembla not because it is disoriented, but because the ‘dirty ecologies’ of this human-transformed environment provide resources and shelter. Patricia Yaeger (2013) discussing the amazing film Beasts of the Southern Wild, argues

“The film’s rags and wastelands—its killing fields—become powerful emblems of the Southland’s (and our nation’s) commitment to toxic inequality…The citizens of the Bathtub practice a dirty ecology, making do with what they can salvage from other waste-making classes.”

The imagined community of the Bathtub, lost in the interstices and floodzones of the modern American juggernaut, reflecting class and racial neglect, is, like Allens Creek, simultaneously full of life and energy. Both the humans and the non-humans living in these environments thrive or struggle with repurposed elements from other ecologies. The toxic dirt and debris of the steelworks waterway are the hidden byproducts of the glistening steel towers in modern cities; the marginalised workers fishing in these waters are increasingly discarded by the processes of capital and automation. 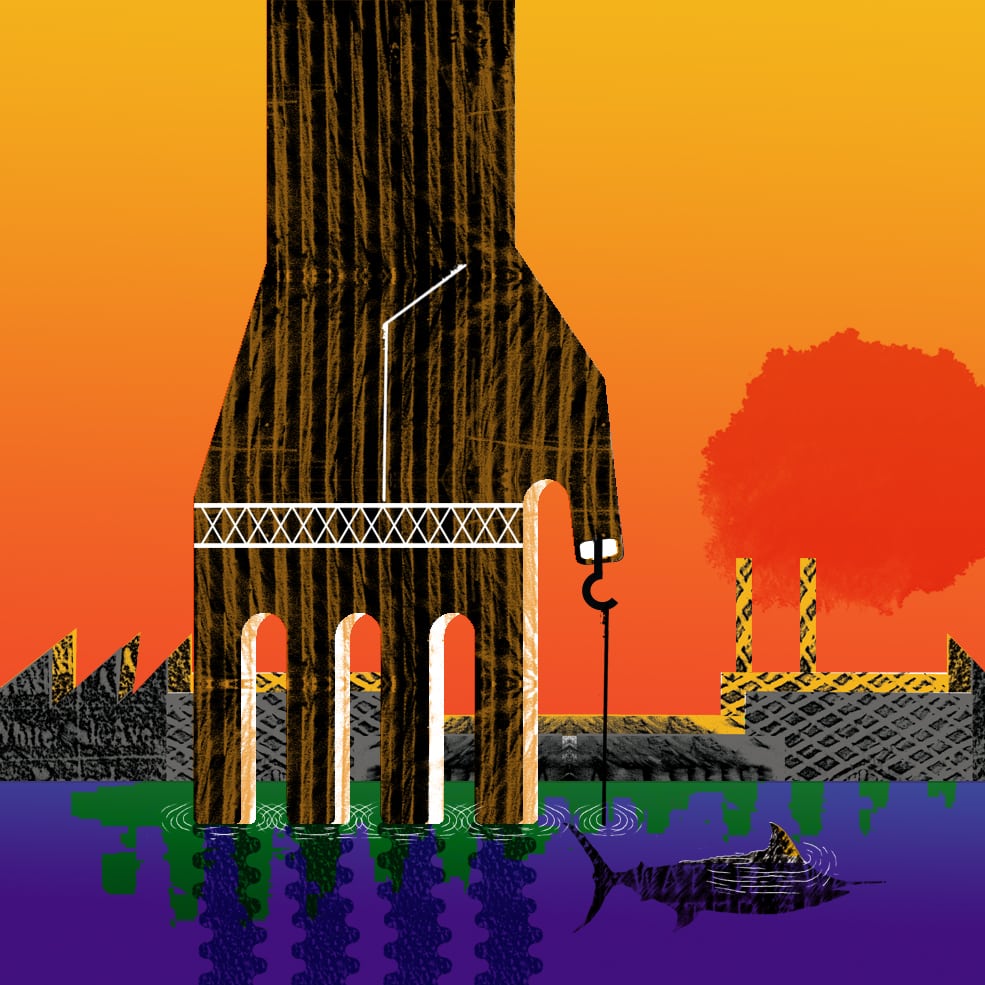 All this of course is not so far from jugaad. Radjou et al (2012) define some underlying principles of jugaad as seeking opportunity in adversity; doing more with less; thinking and acting flexibly; simplicity and ‘heart’ – elements of these easily map onto both human and other ecologies. Around the world, many human communities approach innovation and change through the same principles that define jugaad.

The powerful presence of the Black Marlin highlights for us what water and its denizens might have to teach us. How do we learn in these interstitial environments? What are the seen and unseen processes of respect, reciprocity, generosity and humility between humans and non-humans in these liminal zones? How is the ocean water itself, covering 71% of the planet and containing 99% of its inhabitable area, a key learning opportunity for us?

In much of both popular and scientific discourse there is an increasingly insistent environmental story of damage, extinction and decline. Simultaneously, some scientists, environmentalists, humanities scholars and artists are rethinking the nature of nature. I want to argue that all environments are still whole environments, that the whole is constantly reassembled, reorganized, from whatever are the available constituent parts and processes. This idea of new ecologies emerging from pre-existing and new constituents has been discussed by a number of researchers. In 2013, the edited volume Novel Ecosystems (Hobbs, Higgs and Hall) presented a range of perspectives, Emma Marris’s book Rambunctious Garden (2011) had earlier explored the challenge of ‘saving nature in a post-wild world’, and George Monbiot’s Feral: Searching for enchantment on the frontiers of rewilding (2013) also provocatively explored these ideas.

The spaces of Allens Creek, marine aquatic and terrestrial, have rewilded themselves. New communities flourish here, made up of both pre-existing species and new arrivals. These are the unguarded, unmanaged spaces where lives can flourish and decline often unobserved by the auditing eyes of power. The human observers of the Black Marlin are working class men, steelworkers and fishers who occupy marginalised spaces in society. These are people for whom much of their learning and knowledge is embodied; they carry their skills in their hands. Fishing is a working class recreation, but one with often very high levels of knowledge and embodied skill.

In a world where many human societies are increasingly narcissistic, where our only concern is ourselves, the appearance of the Black Marlin in the steelworks is a transcendent experience. Perhaps our task is to harmonise ourselves with these old and new environments, not continually attempt to ‘manage’ them into some other state that we in our hubris think is more desirable, whether ecologically or economically. Part of the opportunity for learning is to honour the knowledge of those vernacular worlds. Another part is to trust our own embodied, intuitive understandings, our affective and emotional responses, our ancient ways of understanding that lie beneath the more recent cognitive processes.

The waters of the Blue Planet are simultaneously and paradoxically both vulnerable and damaged, and unlimited in their power to damage and make vulnerable. The South Asia floods, almost invisible in world media next to Hurricane Irma, bring this home yet again to the world’s most populous region. Our shared material bodies: humans, the Black Marlin, the ocean water itself, are composed of the same elements: each is a rearrangement of the other, and each will be rearranged again as they die and return to the matrix from which the next lives will grow. Embracing humility, listening, slowness, might transform our practices of care through making space for others, helping others endure, moving our human selves to the edges instead of the centre.

Monbiot, G., 2013. Feral: Searching for enchantment on the frontiers of rewilding. Penguin UK.

Michael Adams is Associate Professor of Human Geography at the University of Wollongong, Australia. He was born in India.
His research includes work with indigenous communities and conservation and heritage management in Australia, Arctic Scandinavia and India.