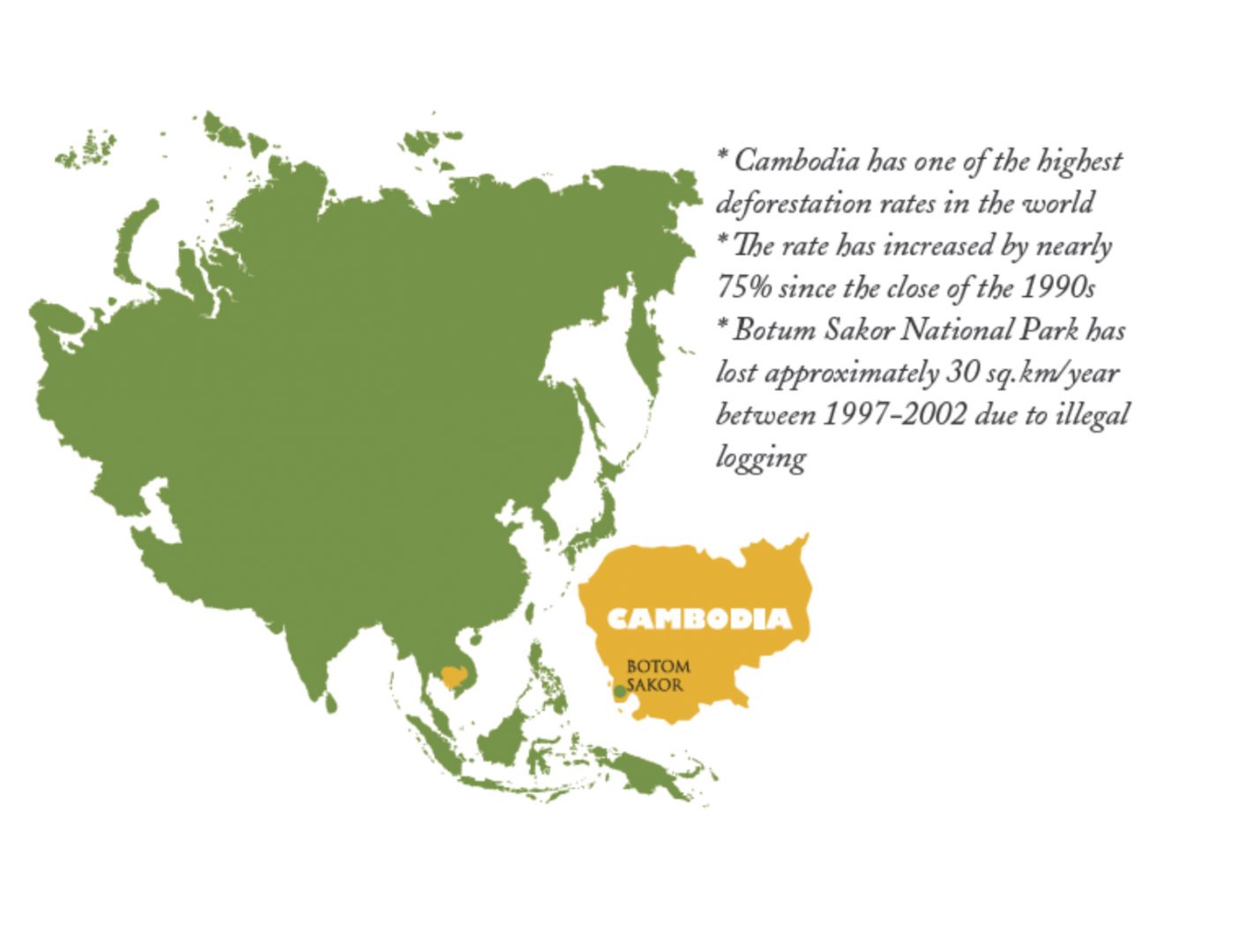 Situated near the southwestern border of Cambodia, at the foot of the Cardamom Mountain range, Botum Sakor National Park provides an astonishing diversity of plant and animal species. However, this extraordinary biodiversity is now severely threatened by a range of anthropogenic disturbances, especially illegal logging.

Botum Sakor National Park constitutes one of the protected areas in the Cardamom Mountains Priority Landscape and is officially managed by the Department of Nature Conservation and Protection, which is part of the Ministry of Environment. Over the last few years, a wealth of species of great conservation importance has been recorded within the national park. Before the construction of the highway along the northern boundary of Botum Sakor National Park, it was connected to the forests of the Southern Cardamom mountains. As a consequence, several species are found in both regions.

It has been estimated that Botum Sakor National Park could contain over 2000 groups of the rare Pileated Gibbon, which is only found in South West Thailand, Cambodia, west of the Mekong River, and in a small area of Laos. The national park might in fact contain as much as 10% of the global population of Pileated Gibbon. However, the recent construction of the highway particularly threatens to fragment the population, and hence possibly the long term survival of the species in Cambodia.

The Dhole, or Asiatic Dog, is a medium-sized Canidae species which occurs in low density over a widely distributed fragmented range throughout Asia. The global decrease in Dholes is greatly affected by habitat loss and degradation. This species is not very well studied, but it has been estimated that the national park could support as many as 27 packs of Dholes, which again stresses the conservation importance of this region, not only at a local but also global level. 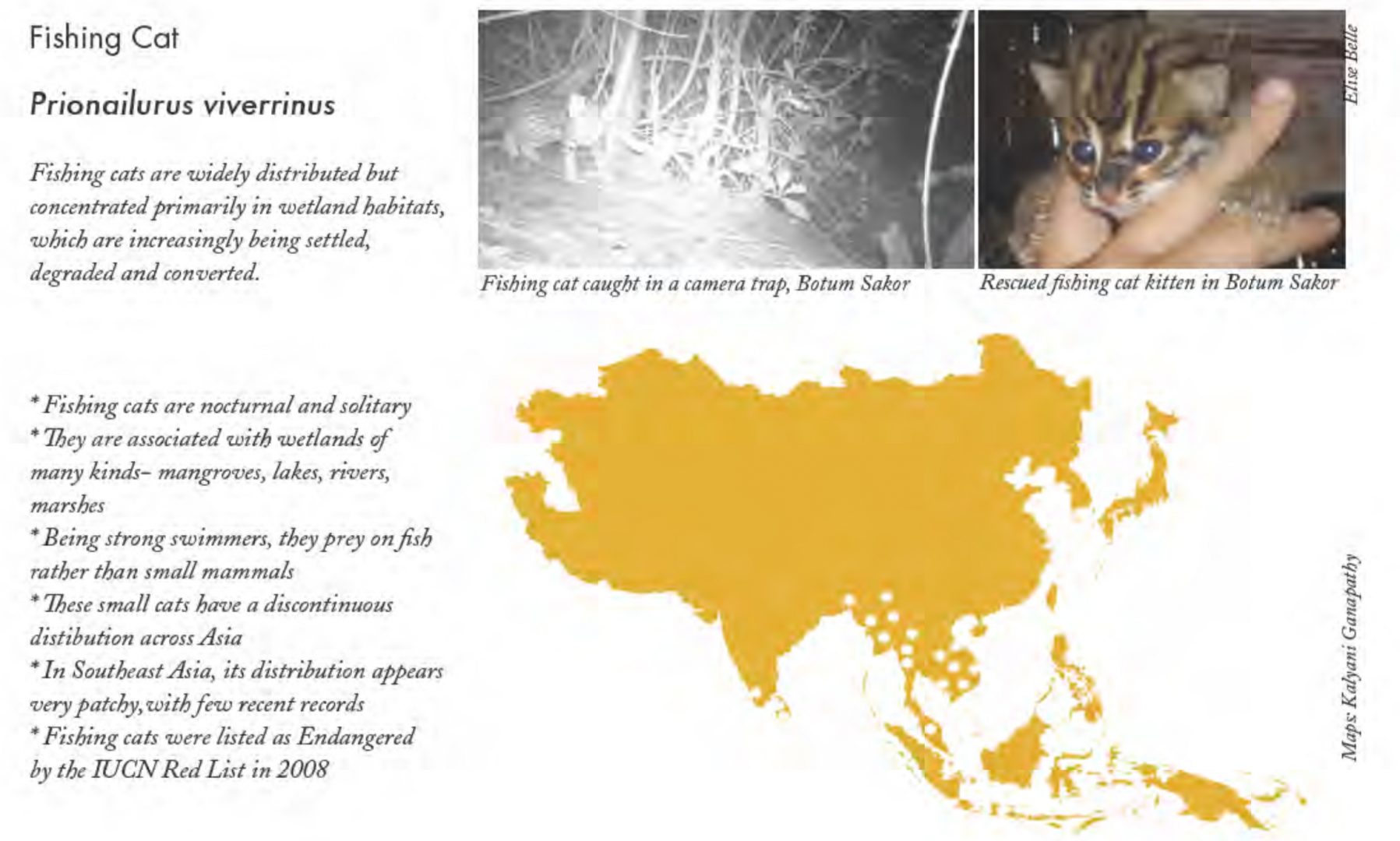 The presence of the Fishing Cat is also of particular significance. Fishing cats have specific habitat requirements and rely on the rare lowland wetland forests present in Botum Sakor National Park. Sadly, in addition to habitat loss, they are also threatened by noose snares which are commonly used, as well as human consumption.

The national park is also extremely important for resident and migratory bird populations, with 533 species recorded so far and estimates suggesting that up to 600 species might be present within the park. Of particular interest among the endangered bird species present, is the White Winged Duck which is one of the rarest waterfowl species in Asia. Because of the already important loss of riverine habitats, populations have become increasingly fragmented, and it is estimated that only about 1,000 individuals remain worldwide. This species is also highly threatened within the park due to the removal of their nesting habitats and noose snares.

In terms of the herpetofauna, a very high number of species of conservation importance are present within the park. To cite only two, the Elongated Tortoise (Indotestudo elongate) and the Siamese Crocodile (Crocodylus stamensis} are listed as Endangered and Critically Endangered, respectively, on the IUCN Red List.

Top: Pileated Gibbon, a rare pecies found only in southwest Thailand, Cambodia west of the Mekong River, and in a small part of Laos. Bottom: Pangolin in Botum Sakor.

Finally, the variety of ecosystems present in Botum Sakor also allow for an impressive floral diversity. Of particular interest are two species of tropical rainforest trees belonging to the Dipterocarpaceae family (Anisoptera costata and Hopea pierrei) which are listed as Endangered. An impressive variety of epiphytic orchid species are also found within the park.

Unfortunately, despite the abundance of species of high conservation importance and the park being officially protected, these species are now under increasing threats by recent disturbance within the park’s boundaries. Since 2004 an Indonesian company has been logging the irreplaceable ancient forests of Botum Sakor National Park. This has been done through the purchase of land concessions, with the dubious pretext of creating acacia plantations, thereby destroying biodiversity and habitats. This is in turn likely to affect rainfall levels, causing severe draughts, as well as dangerous landslides. The company has been widely criticised for their very destructive practices. In addition, the loss of the forest is also very detrimental to the local populations who rely heavily on the ecosystem services it provides. In addition, there are other threats already affecting the park, or likely to affect it in the near future, such as water pollution, large tourist developments planned on the west coast and offshore oil rigs.

The protection of Botum Sakor National Park therefore urgently requires the commitment, not only of all local stakeholder groups, but also of decision makers. To this end, it is crucial to raise awareness, especially of the political class, of the long term benefits of non-timber forest products, such as ecotourism, which the protected area could easily provide, given the wealth of biodiversity present.

Elise Belle is currently the Research and Development Manager at the Society for Environmental Exploration. emsbelle@googlemail.com