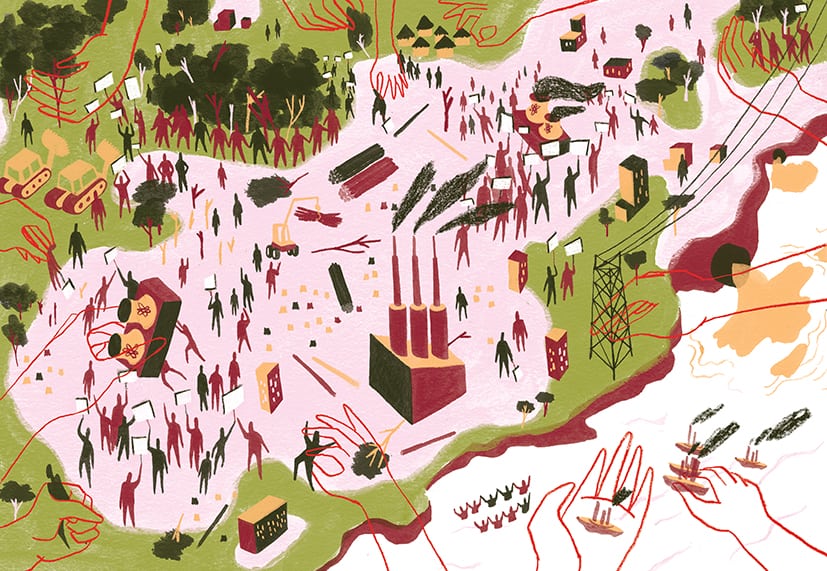 21st September 2017
I am on my way to Barcelona. If I squint I may just see the chimneys that signal the entrance to the city, but I know it’s just my imagination – the city is still an hour away. The train from the provincial town of Blanes to the metropolis traces the Mediterranean coastline, a sleeper-and-iron transect that wanders along its beaches and coves. After every big storm, the sand from the beaches has to be cleared from the tracks. This railway line would violate every one of our coastal regulation zone (CRZ) rules in India. This is Spain. The track was constructed a long time ago. It probably violated many environmental guidelines back then. It was built anyway. The journey is undeniably lovely.

Barcelona is in ferment. The Catalans are demanding a referendum. They want nationhood. A separation from the idea of Spain and a recognition of their autonomous economy, culture, identity and history. Yesterday they took to the streets. The government in Madrid, in a ham-handed provocation, sent in the central police force to arrest and grill Catalan bureaucrats for colluding with the separatists. It didn’t help that this was the same police force set up by the repressive dictatorship of Franco. The Catalans, in protest, took to the streets, pouring out of their houses carrying flags of an independent Catalonia, flowers to hand to the police, pots and pans, righteous indignation. They encircled the administrative buildings with loud protests. The police could only leave when, past midnight, the masses granted them safe passage.

I live with a Catalan nationalist. She is a strong believer in the idea of a separate nation. I have watched how, over the last decade, her vague dissatisfaction has grown to a more focused indignation and a sharp anger at the increasingly authoritarian handling of the Catalan question. So yesterday, when she heard of the protests in the city, it was the most natural thing to leave work mid-sentence, jump into the car, and drive the 140 km to Barcelona to add her voice to the throng.

Standing with her in the crowded, angry square, watching a large banner welcoming us to the self-declared Republic of Catalonia being unfurled on a nearby building, I felt a sense of profound disconnection. How was I to relate to this? The Catalans have their political heroes, their ideological wise men and women who show them the way. They may bicker over the little things, but they stand together on the important things. They seem to have a plan. And the Catalans believe them. When they call, the Catalans rise up to dissent. Change, they are assured, will come. A bright new future awaits, just there, past the next legal hurdle.

While one part of me envies this fervent energy, another – the resigned realist – cannot help smiling at the powerful belief the Catalans rest in their leaders. Our own experience in India tells how little our belief in politicians really brings. We are not ruled by a Franco – at least not yet. Still, we know better. Politicians of every stripe are an amoral, self-interested bunch of crooked power-brokers. The only thing that separates a good politician from a bad one is her ability to manipulate popular belief for as long as it takes to get what she wants. We know this in India. To find a politician that speaks with our voice is a vanishingly rare thing. And when he does, we have to look to him with growing suspicion. What’s in it for him? When is he going to disappoint? We look at every call to dissent and we smile the smile of the failed romantic. Ah, yes. How wonderfully quaint to believe that dissent can bring change for the better. 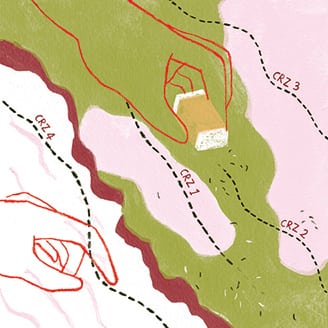 The coastline outside my train window is heavily modified. Harsh breakwaters – concrete and rocks – try vainly to protect small bits of coast from erosion. The beaches behind these breakwaters are artificial. The have to be replenished every few years with sand from the rivers, smoothed down each morning for a fresh batch of tourists. To the south, without having to squint, the three chimneys of Les Tres Xemeneies rise above the September haze that envelops the city. It is a defunct thermal power plant built right on the beach, destroying vast acreage of the Bésos Delta when it was first constructed in 1970s. There were protests when it was first proposed. It will be an environmental disaster. It will be an architectural eyesore. It was built anyway. Coastal regulations were not so strict back then.

I think of our own coastal regulations in India. The year 1991 seems like a long time ago, but when plans for the coastal zone regulations were first being circulated, there was a genuine sense that this was something different. It was not so much a legal notification as a vision statement. Of the special ecological status of the coast and islands. Of the unique traditions that linked coastal communities with their ecosystems. Of how vulnerable these narrow stretches are to rampant over-development, overuse, overpopulation. Climate change was not yet the buzz phrase back then, but here was a document that did everything you could expect from a government taking cognizance of how climate change was likely to impact the coast and islands. Sure, we bickered over the details. But here was something we felt we could be genuinely proud of. Something to believe in.

We know the reality. It is the reality of most environmental legislation today. There have been, to date, more than 20 modifications to the original notification, each a rationalization, a clarification, a dilution, a workaround. If current reports are right (and a recent right to information request confirms this), there are plans to make the notification a shadow of itself. The coast, in case you hadn’t heard, is open for business. There are industrial and tourism opportunities everywhere, for the taking. This is not the 1990s. Or even the 2000s. The decades of dissent are done in India. So yes, there will be a few small protests, but they will be ignored, laughed at, labeled reactionary. Anti-national. There was a time when “environmental stories” bought eye-balls for our infotainment industry but between the raucous politics of division and celebrations of India’s neo-liberal dreams, they have other, more entertaining things to occupy themselves with now.

We have no environmental heroes in India anymore. Nobody who can get us out on the streets with our pots and pans. And while our government is not yet as blunt-headed as Madrid in dealing with dissent, the machinery of state is powerful enough. It is surprisingly easy to quiet the noisy NGO sector – show them up for the squabbling complainers that they are; magnify their differences so they make for easy pickings; remove them from all policy forums; weigh them down with bureaucratic filings; quietly threaten to revoke their legal legitimacy; squeeze their funding sources. Between fear, cynicism and plain tiredness, civil society voices are reducing to a whimper over government and big-business disdain for the environment.

Barcelona’s skyline is getting clearer on the horizon. Once reviled, Les Tres Xemeneies, now marks where the city begins. It is stripped bare of everything except its brick chimneys, but remains an architectural statement as iconic as Gaudi’s unfinished cathedral. It stabs a coastline already much transformed. It tells its own powerful tale of dissent. Conceived in the 1970s, it faced huge opposition from environmental groups and the local government. The power company that owned the property built it against a strong wave of local anger and ecological protests. Its three tall chimneys rose as a mutant three-fingered ‘f*** you’ to the environment, the coast, the local community. The plant polluted the nearby beaches and seas with black rain. Mistreated its workers. Saw more violent protests, this time from workers, in which police intervened. People died. And in time, like other grand projects of the time, it became unprofitable and faced demolition. Once loathed as an aesthetic disgrace blotting the city skyline, the citizens of Barcelona now rallied to save the structure as a symbol of cultural and environmental resistance. It lies bare now, its future uncertain. It may become a museum.

Dissent as art. Signifying all it fails to achieve.

Last night’s crowds would have dispersed by now. They were up late, banging pots and pans on the streets and from their kitchen windows. Their dissent will continue. Will they get the change they want? And if it comes, will it be all they expect it to be?

This is my stop.

Rohan Arthur works as a scientist with the Oceans and Coasts programme of The Nature Conservation Foundation. He flits between India and Catalonia.