Exploring the Relationship Between Water, Waste and Well-Being in the Coonoor Watershed 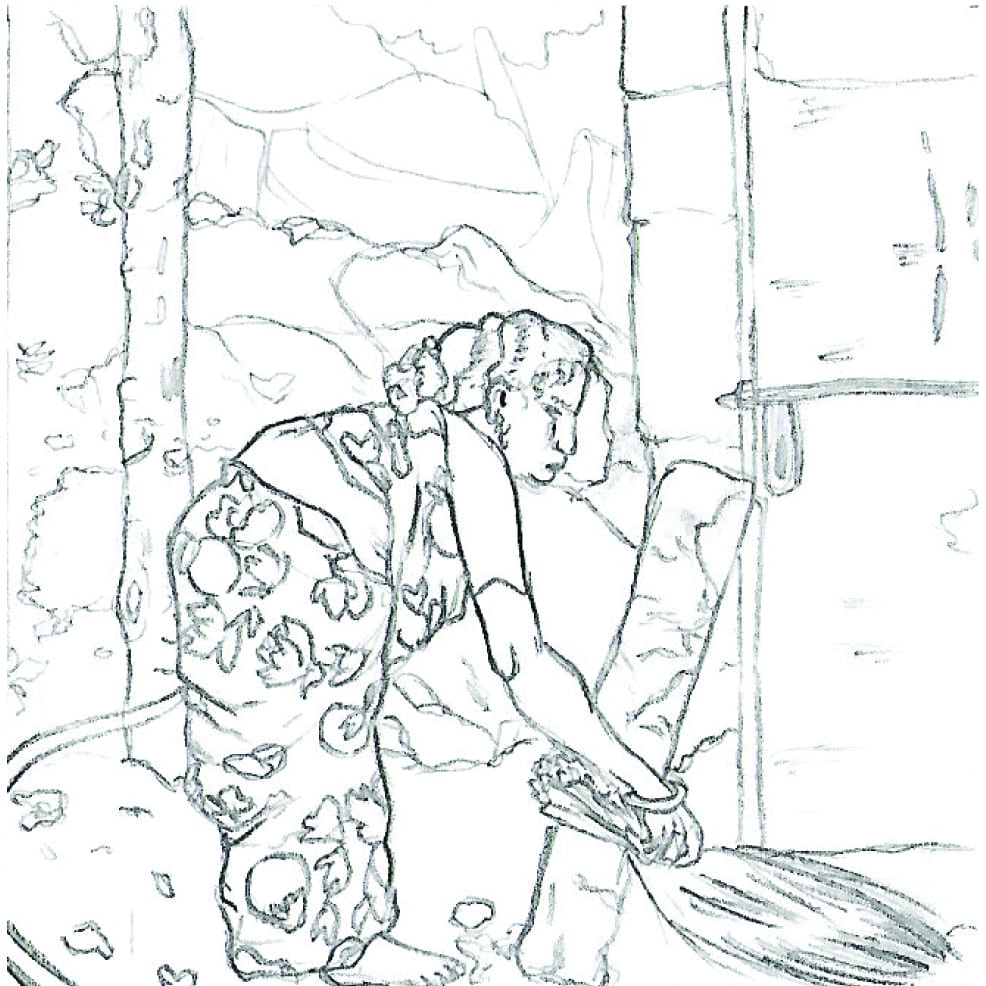 The Swachh Bharat Mission is associated with creating “clean villages” – yet improvements are not consistently seen in many of the communities for whom the policies are designed. The Nilgiris Field Learning Center’s (NFLC) four-year study on the relationship between water and waste in the Coonoor Watershed examines some of the factors contributing to these inefficiencies, specifically exploring the role of the Swachh Bharat Mission. In partnership with the NFLC health team, our research explored linkages between water quality, livelihoods, and health—and the sociocultural factors that shape water contamination in the Coonoor watershed.  Future research along a stream transect, to be completed in the next two years, will focus on settlements further downstream to understand spatial and cultural variables shaping waste production and water quality as rivers flow into the plains.

During the project’s first two years (2015-2016), research teams worked with several non-tribal villages in the Hubbathalai Panchayat. This past year, the project moved downstream and began work with two tribal villages located within a kilometer of each other along the Burliyar highway. After a landslide wiped out their original villages, the communities founded these villages during the early to mid-twentieth century. Each village is under thirty households, contains government-built housing and offers basic services. Most villagers earn their income through daily wage labor.  One village has a producers’ center, which connects the community’s traditional non-timber forest produce based livelihoods to markets. Yet both villages remain disconnected from their ancestral agricultural and forest roots.

Both villages sit on a steep slope between a large tea estate and the Coonoor River below. Their watershed catchment runs at a forty degree incline and several streams flow past the villages down the slope.  Deep soils with high transmittivity, a medium water-holding capacity (100-150 mm), and well-drained sandy clay loam soil create an environment where water moves quickly through the system (National Bureaus of Soil Survey and Land Use Planning 1997:25-31).  This site feature, in conjunction with the prevalence of soak pit toilets and open-defecation practices in the area, could lead to increased fecal contamination—posing a serious potential health risk for the communities. 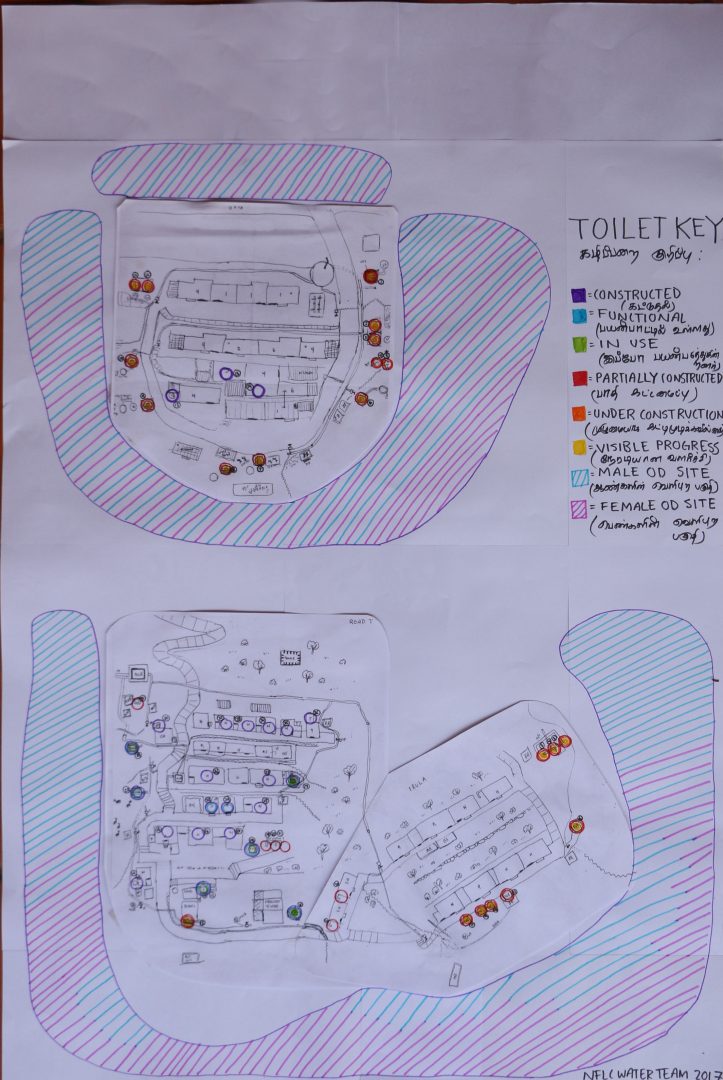 Maps prepared for community presentation  indicating water and waste infrastructure and conditions (not to scale and names of villages removed).

Drawn by Emma Eaton with data from Eaton and Arunagiri, NFLC 2017

Through our analysis, we sought to understand how location, infrastructure, and socio-cultural practices influenced water quality and consequently, health at the village level. These three dimensions allow for a more nuanced understanding of how interpersonal and structural relationships interact to mediate the links between water, waste, and well-being in an indigenous context.

Water flows from a spring, mixes with runoff from the surrounding forested catchment, and diverts into the streams from which the two villages source their water. Both villages use a system of rudimentary plastic surface pipes (500-1000 m long) to transport water into a covered concrete storage tank. One-and-a-half-inch diameter GI pipes distribute water from the holding tank to stand pipes where residents collect water for drinking, bathing, and other domestic purposes. These access points run along the periphery of the rows of village line houses. During the 2017 dry season, the stored tank water in both villages tested positive for fecal coliform. Although the stream watershed above the villages does not contain any houses, contaminants from tea estate soak pits as well as other mammalian feces likely infiltrate the water supply.

Gray water flows directly from the standpipes and surrounding bathing areas into dirt drainage ditches that pass over soak pits, open-defecation sites, and garbage pits before reaching the Coonoor River below. Considering the soil’s percolation and holding properties, water is not likely retained for the ten days that it takes to filter out pathogens (Oram 2014). While this may not directly impact village health, it highlights problematic downstream relationships and how all upstream villages contribute to contamination in the river. These soil properties also bring the placement of soak pit toilets into question. India’s national Swachh Bharat Mission (SBM), a scheme promoting sanitation infrastructure, was introduced into both of these villages just before we started our field work. While the SBM toilets were not all completed at the conclusion of this study, we observed noticeable progress during our fieldwork. Given how closely SBM toilets are located to the perimeter of the village, space was the primary placement consideration, not soil suitability. In time, more tests need to be done to understand whether seasonal fluctuations in the water table could draw out harmful contaminants from the soak pit leach sites.

Despite SBM toilets, open-defecation practices continue to be followed. Villagers explained that they are more comfortable going into the forest than they are using SBM toilets. Aesthetics of nature and culturally inappropriate placement—often inside the house—of government toilets through earlier schemes are major factors contributing to the underutilization of toilet infrastructure. While new toilets are being constructed outdoors, use patterns of existing outdoor toilets suggest that this new scheme alone will not be enough to eliminate open-defecation.

One toilet per household does not equate to one open-defecation-free household. Only one out of the eighteen total indoor toilets in both villages are currently being used. Although the placement of SBM toilets outdoors will likely make them more widely used than the indoor toilets of earlier government schemes, the SBM toilet’s design is making it harder for villagers to transition to using these toilets. Cost effectiveness seems to be SBM’s primary concern. Design exists only as a factor of physical functionality—resulting in a cement-block toilet that is dark, cramped, poorly ventilated, lacking a direct piped water supply, and linked to a foul-smelling soak pit—the exact opposite of the surrounding forest environment. The indigenous preference for open-defecation needs to be understood within these parameters when implementing these interventions. Our evidence suggests that the SBM is not sufficient to eliminate open-defecation or prevent the presence of fecal coliform bacteria in water. 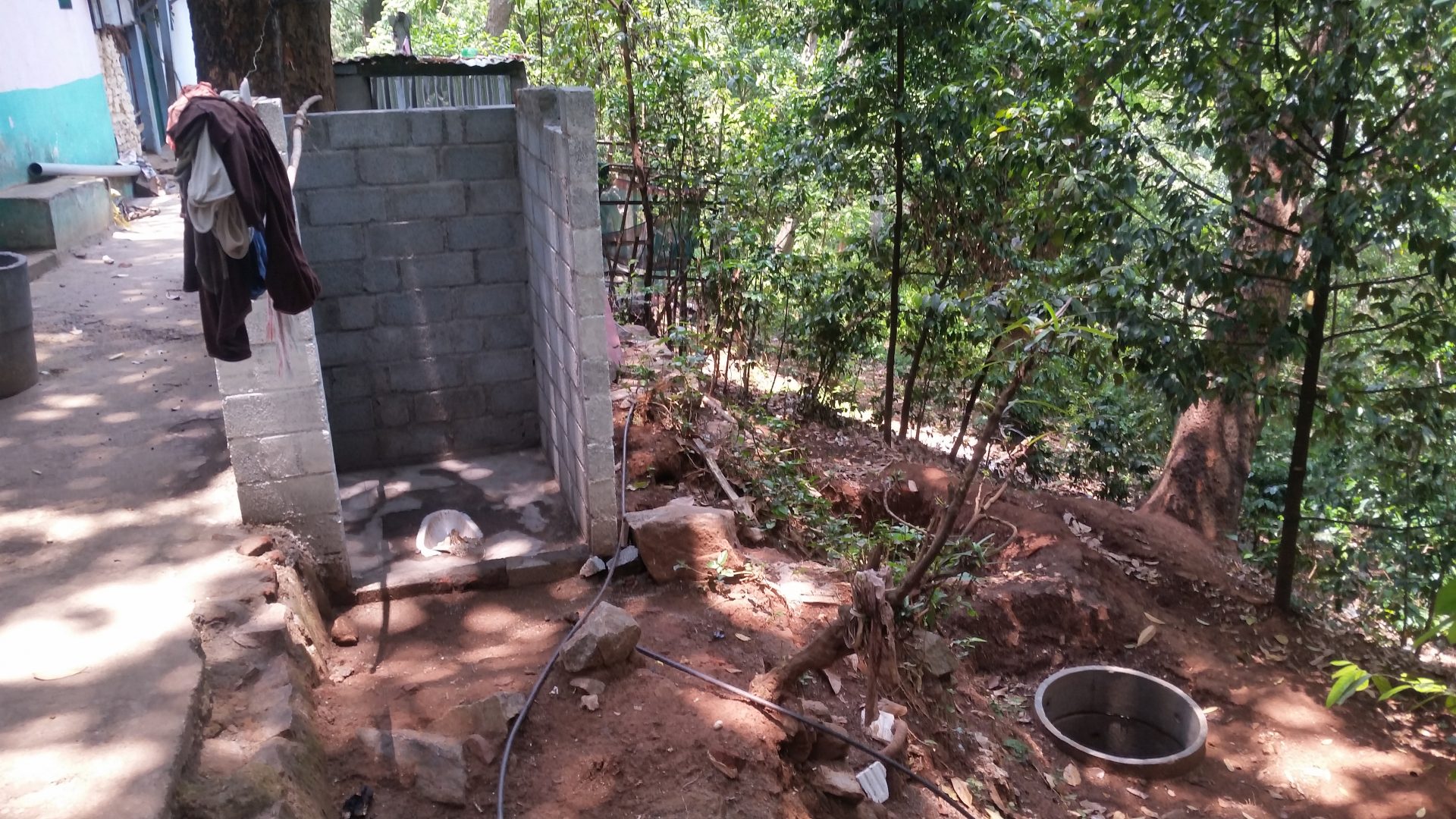 From a human-health perspective, the sanitation infrastructure is ineffective in both our case villages. With limited governmental support, there are not enough village resources to properly purify the water and prevent downstream contamination. Toilets are also not being installed in a way that eliminates open-defecation and its associated risks. We also sought to understand community perceptions of water-borne illnesses and village water treatment methods to clarify how people understand the relationships between water, waste and health. 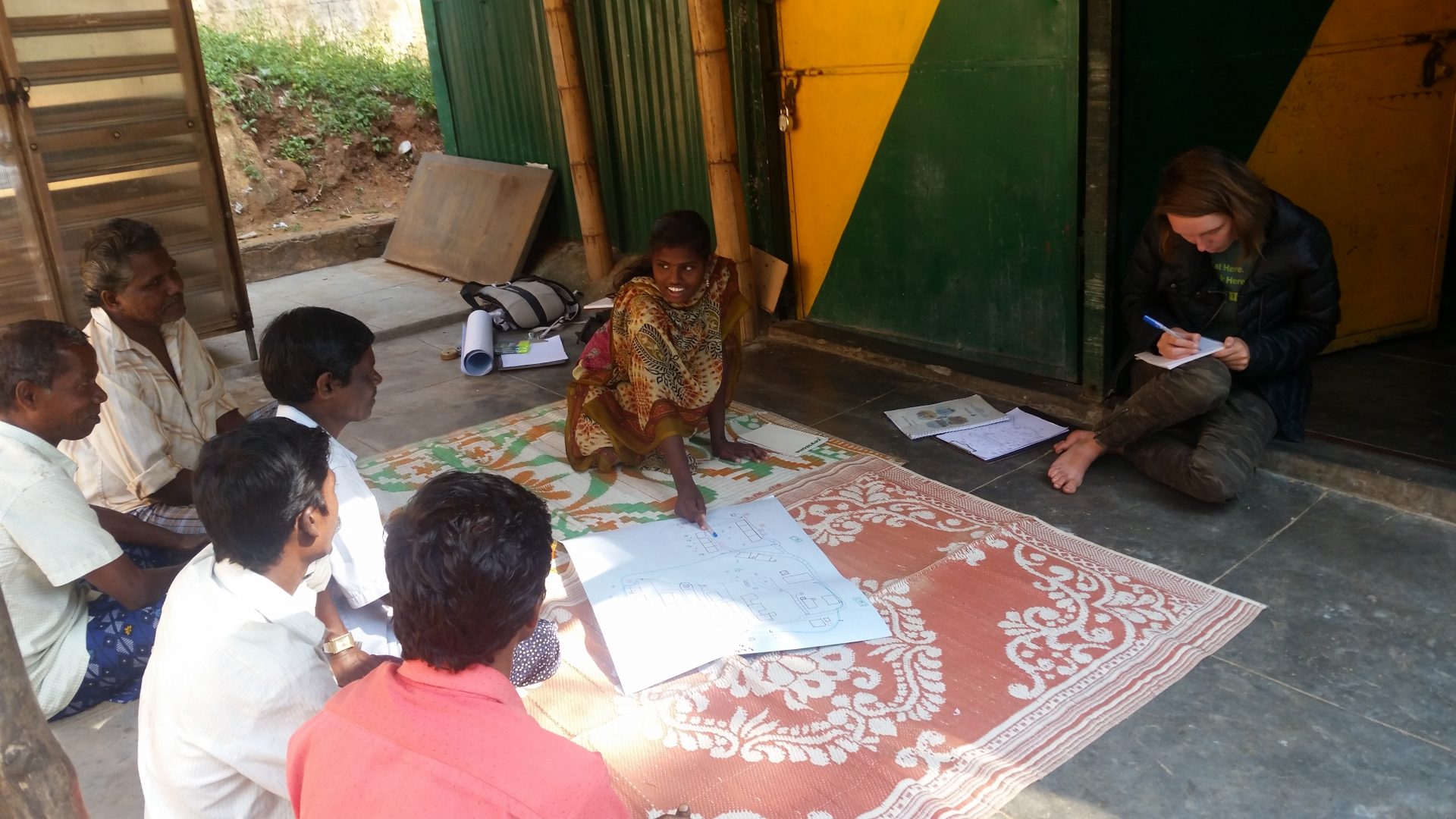 The authors meeting with a group of men in the village to understand their perspective on water and waste issues. Credits: Shanmitha Raghu, NFLC 2017

While villagers shared an overall lack of specificity regarding types of illness and their causes, women demonstrated a broader understanding of health challenges and linked illness to water quality more explicitly. In contrast, men tended to attribute their illnesses to work exhaustion and rarely connected it to water quality. Villagers also pointed out that rainy season water was less safe to drink – indicating that there is a seasonal sense of urgency surrounding water treatment. Even with a widespread understanding of these risks, children, the ill, and the elderly were the only groups likely to consume treated (boiled) water. Although everyone was aware of a few general ailments, most said that they would require a doctor for diagnosis. These seasonal and demographic differences gave us a more nuanced understanding of how villagers identify, respond to, and treat the effects of contaminated water.

Our intensive water-and-sanitation-related observations of young children, siblings and care-givers in their homes revealed a variety of other routes for fecal-oral transmission. Since most open-defecation sites weren’t near water, bathing rooms were used to rinse after going in the open. This brought the fecal contaminants close to the home, and in the immediate perimeter of the village into a space often used for washing dishes and clothes. Our observations also revealed that the yards outside the houses contained large amounts of feces from wild monkeys, and domestic animals such as goats and chicken. Young children crawled over this area frequently and sometimes attempted to consume the waste. This, in combination with infrequent and soap-free hand-washing practices, makes contaminated water just of one of the many potential fecal-oral transmission routes.

Understanding the relationship between location, infrastructure, sociocultural factors, and health serves as a starting point for further questions. Why and how do different communities interact with water and waste differently? What are the implications of these interactions? How can responses to the current environment inform future policy decisions? Village health depends on all of these variables. A simple description of sanitation and water facilities and infrastructure, or where contamination exists is not enough. We need to also understand how villagers interact with and manage a range of contaminants.

To ensure equitable and effective sanitation policies, policy makers must understand diverse communities and contexts. Our research highlights interconnections that need to be considered when implementing such interventions. Although sanitation efforts will always have to balance effectiveness and scale, emphasizing the relationship between the structural and the personal can help reduce the disparity between these two variables.

Acknowledgements: Neema Kudva, T. Balachander, Shanmitha Raghu and Gokul Halan made important contributions to this work. We would like to thank all the faculty and staff of the Nilgiris Field Learning Center, the Keystone Foundation, and the community members who shared their time with us, for enriching our experiences and making our research possible.

Emma Eaton’18 just graduated with a major in Human Development at the College of Human Ecology at Cornell University. She can be reached at ele46@cornell.edu.

Meena Arunagiri lives in the Pillur Valley, Nilgiri Biosphere Reserve. She has a  partially done B.Com degree, has been trained in professional photography and wildlife filming and is a graduate of the NFLC class of 2017. She is free lancing with projects from Keystone and has just recently completed a one year photo documentation on the situation of single women in Pillur.