The histories of traditional fishing and coastal communities in South Africa, like those of many coastal communities in post-colonial contexts the world over, continue to be shaped by the legacies left by their colonial occupiers. These communities remain marginalised within the political economy of fisheries governance management and marine conservation in South Africa and are engaged in a prolonged struggle for the recognition of their fishing rights.

Building on the approach to native administration developed by the British colonial administration from the 1850s, the apartheid state created a separate, deeply unequal and distorted system of spatial planning and administration, based on racial and tribal classification. This impacted traditional fishing communities extensively as they predominantly comprised poor African and coloured families who depended on marine resources for their food security and livelihoods. Racially-based, discriminatory legislation divided access to the coast, restricting African persons of different tribes to residence in areas known as tribal homelands. Large stretches of the coast in these homelands were declared marine protected areas, several of them later declared complete no-take marine reserves. The local owners of the land were forcibly removed from these coastal reserves and resettled, effectively dispossessing communities, whose ancestors had resided in these areas for centuries, of access to their land and marine resources. Even outside these designated homelands, traditional fishing communities were marginalised as the focus of state policy and support centred on the development of the white-controlled industrial fisheries. These policies undermined communities’ customary systems of tenure, their culture and their local ecological knowledge.

In 1994, following the election of the first democratic government in South Africa, these fishing communities held high hopes that their rights would be recognised and they would secure redress for the dispossession that they experienced at the hands of the white minority apartheid regime. Prior to this the State fisheries department had only recognised three categories of fishing — commercial, recreational and subsistence. Subsistence fishing was tightly controlled for local use. Artisanal and other small-scale fishers who fished for their own food and for a livelihood were not legally recognised. The relative invisibility of the small-scale sector resulted in the failure of the state to recognise the important contribution that this sector makes to food security, poverty relief and livelihoods. In addition, a top-down approach to marine conservation failed to take cognisance of local coastal communities’ customary relationship to coastal lands and waters.

After the election of the new democratic government, a far-reaching process of legal reform was initiated. Most notably, a new Constitution was adopted in 1996. The South African Constitution is hailed as one of the most progressive, aspirational constitutions in the world. The Bill of Rights outlaws discrimination on the grounds of race, gender, sex, pregnancy, marital status, ethnic or social origin, colour, sexual orientation, age, disability, religion, conscience, belief, culture, language and birth. It protects a range of socio-economic rights and makes provision for the protection of tenure security, and redress for those who experienced dispossession as a result of apartheid. For the first time, customary rights to natural resources gained legal recognition in the Constitution. It recognised customary law as an independent source of law and confirmed that any rights arising in terms of such law must be recognised in so far as they are consistent with the Bill of Rights. 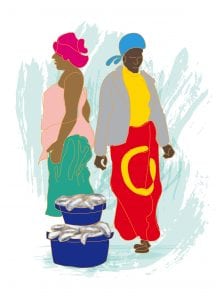 Notwithstanding this Constitutional recognition of customary rights and the right to culture and tenure security, the new national legislation introduced in 1998 to transform the fisheries sector failed to recognise small-scale fishers and still favoured the large, industrially-orientated fisheries sector. Furthermore, the policy introduced to restructure the industry and allocate fishing rights was based on a system that allocated rights to individuals or companies, either through a quota-based system or an effort-controlled system.

This individually-orientated rights system reflected no real understanding of collective rights or the systems of community-based, customary governance that operated within many of the indigenous coastal communities. Rather, it introduced an individualistic, privatised notion of rights to resources. As a consequence, it undermined the social tenures and care economies that have operated in these communities wherein access to and use of marine and other resources reflected bundles of rights and obligations embedded in the social and cultural relations operating within these communities. In most of these local systems of governance, individual rights are nested within family or household rights which in turn are nested within a broader clan-based or community right. Whilst these common property regimes have been impacted by the imposition of a statutory system of administration over the past century, and some have been completely undermined, many of them retain their integrity within local systems of customary law and governance.

Small-scale fishers — with support from Masifundise Development Trust, a non-governmental organisation (NGO) and the Legal Resources Centre, a human rights litigation organisation — embarked on a range of advocacy actions in response to the failure of the reforms to affirm and protect their rights. They supported the mobilisation of small-scale, traditional and artisanal fishers and the development of a community-based umbrella network called Coastal Links. In 2004, they launched legal action against the minister concerned to fight this discrimination, citing their Constitutional rights to food security, their culture and right to their occupations and livelihoods. They argued against the discriminatory nature of the policy which privileged large commercial fisheries but failed to recognise those most dependent on marine resources. Coastal Links and Masifundise launched a campaign, “Fisher’s rights are human rights”, to highlight the interdependence of their right to access to marine resources with other human rights.

In 2007, the Equality Court ordered the minister responsible for fisheries to develop a new Policy for Small-scale Fisheries through a participatory process that would recognise the socio-economic rights of these traditional fishers. During the policy development process many communities advocated strongly for a paradigm shift in fisheries governance from the state-centric, top down system to a community-based systems of fisheries governance. They articulated the inseparable linkages between the socio-ecological systems comprising small-scale fisheries and the economic and cultural aspects that comprise the lives and livelihoods of these fishers. They argued against the individual orientation of the rights regime that had excluded them. They wished to avoid the social conflict and division that the individual quota and licensing approach to fishing rights allocation had introduced, which often pitted neighbour against neighbour in a fight for a limited number of fishing rights. Instead they called for a community-based system that would enable small-scale fishing communities themselves to define bonafide fishers dependent on marine resources for a livelihood. They argued that this would enable them to include the work that women did along the value chain and hence promote gender equity in a community-based tenure system. Such a system would accommodate the recognition of the customary rights of many communities. At the time, the fisheries authority denied that any community had presented them with evidence of customary fishing rights in accordance with the proof required to meet the Constitutional recognition of customary law, and the legal question of what constituted a customary fishing right was yet to be established.

After a prolonged process of consultation, a Policy for Small-Scale Fisheries was gazetted in 2012 and the legislation was finally amended in 2016 to recognise small-scale fisheries as a legitimate category of rights-holders. The legislation was amended to enable the minister to recognise and allocate community-based rights to small-scale fishing communities and to identify zones for the use of small-scale fishers. During this period small-scale fishing communities gained international visibility through the adoption of the Voluntary Guidelines on the Responsible Governance of Tenure (FAO 2012) and the Guidelines on Small-Scale Fisheries. The South African Department responsible for fisheries management participated in the negotiations and adoption of these instruments and has committed to the implementation of these instruments at a national level.

Progress towards realisation of the vision of the new policy and implementation of the legislative amendments has been painfully slow due to political interests. The dominance of a neoliberal approach to fisheries and marine resource governance has resulted in the continued privileging of large, industrial, export-orientated fisheries. This sector, with close ties to the ruling elite in government, has actively resisted efforts to transform in favour of the principles of securing food sovereignty and local livelihoods and recognising customary rights. Instead they argue that they can contribute more to job creation and poverty alleviation through an export-oriented fisheries policy that uses commercial quotas as the means of managing resource allocation. To date, the fisheries authority has failed to allocate a viable portion of the nearshore resources to small-scale communities. On the contrary, individual commercial rights have continued to be allocated the most valuable resources in the nearshore. Conservation management tools such as marine protected areas have continued to be designed and implemented in a top-down manner without traditional fishing communities’ participation. 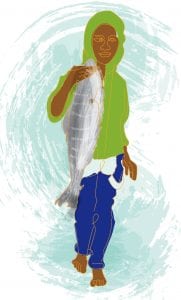 The neoliberal turn towards the ocean and the valorisation of the ‘blue economy’ has also exacerbated the marginalisation of the small-scale sector just as the fishers were on the brink of realising their rights. Now, in contrast to the re-prioritisation of marine resource allocation in favour of local coastal communities’ pre-existing rights, attention has turned to the ocean economy. The President is driving a national initiative to maximise the productive potential of the oceans, described as ‘unlocking a new economy’. South Africa is also playing a leading role in the Indian Ocean regional drive to exploit this ‘blue economy’. These initiatives are dominated by powerful gas and oil mining interests, industrial aquaculture, and energy and marine transport sectors. Instead of a paradigm shift in favour of a sustainable, equitable and human rights-based approach, a powerful current of extractivism has hit the coastal and fisheries sectors. Lip service is paid to the use of marine spatial planning (MSP) as a governance tool to ensure that the interests of ‘all stakeholders’ are considered but in reality the power of capital predominates and is shaping the marine and ocean space in new but uncomfortably familiar patterns. Small-scale communities with ancestral links to coastal lands and lengthy histories of reliance on marine resources are marginalised in the narratives of economic value and ecosystem services. Hand in hand with this drive for exploitation is the strengthening of a neo-protectionist conservation approach which argues for an expansion of the marine conservation estate in order to counterbalance the anticipated surge in ocean exploitation. This conservationism operates akin to an additional form of extractivism, further dispossessing traditional fishing communities from the marine commons.

Whilst the continued marginalisation of the small-scale sector has impacted individual fishers, families and communities heavily, deepening poverty and undermining the social fabric of these communities, these communities continue to fight for the implementation of the vision of the small-scale policy and for their rights. In the face of new permutations of neoliberal capitalism and domination in the marine commons they are forming new alliances and developing new strategies. Increasingly, they are realising the need to build alliances with other small-scale producers, harvesters of natural resources and workers in ‘precarious work’ sectors. These strategies draw inspiration from local as well as international social movements. They are expanding their horizons to harness the power of new information communication technologies. These tools are strengthening their position within markets as well as enabling them to demonstrate the critical contribution that their local ecological knowledge and skills make towards climate-smart, equitable, sustainable human rights-based fisheries management and marine conservation.

Jackie Sunde is an independent researcher and activist working with small-scale fishing communities in South Africa.