Can insights from gendered knowledges of fire in California and Australia facilitate a dynamic transitioning of traditional fire knowledge into present-day fire and land management? 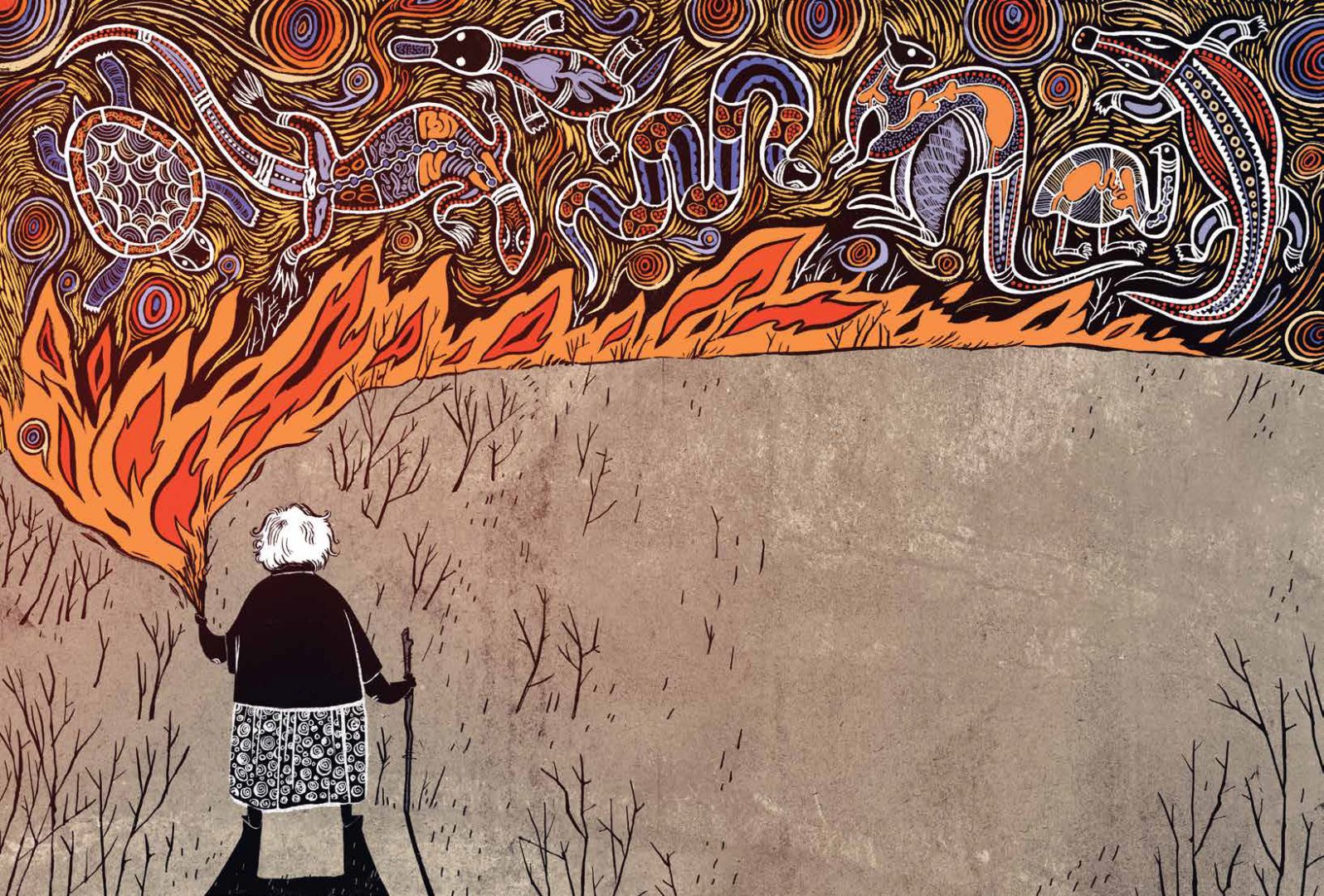 Fire has played a key role in the land management practices of Aboriginal Australians and Native Americans for millennia. However, colonial interests have disrupted indigenous use of fire in multiple ways. This article summarises how gender is entwined—spatially and temporally— in the adaptive knowledge trajectories through which some Aboriginal Australian and California Indian fire knowledge is retained and revived. The article draws on oral narratives shared by indigenous elders, cultural practitioners, and land stewards during prescribed burns, fire knowledge workshops, field trips with students, informal conversations and audio-recorded interviews.

A ‘disconnect’ between the past, present and future of both ecological and cultural aspects of fire underpins a tendency amongst many researchers, policy makers, and practitioners to dismiss or ignore fire knowledge that is alive today amongst indigenous elders and cultural land stewards in Australia and the United States of America (USA). Instead, guidance is sought from archaeological and anthropological records or from scientific models that project the future. This tendency persists despite the tangible results of adaptive management frameworks that have empowered indigenous knowledge keepers to practice fire.

The many similarities between New South Wales, Queensland and California—ecological, colonial, pyro-geographical and between indigenous environmental knowledge and burning practices – invite comparison with one another. Our findings further support this comparative approach despite running the gauntlet of scholarly criticism regarding the portrayal of all indigenous knowledge as being similar.

Indigenous eco-cultural burning is distinguished from agency fire management in the context of traditional law, objectives and the right to burn. By ‘traditional’, we refer to the time-tested knowledge and customary practice, which still guide many indigenous societies. Traditional law and lore are rooted in the landscape and stories that define a given culture. By ‘lore’ we refer to story, where indigenous law is coded in the lore. Many examples of fire in the stories of indigenous people explain various aspects of fire knowledge from inter-specific relationships to devastating fire. This knowledge informs how a culture interacts with fire spatially and temporally.

It is important to recognise that culture and knowledge are as dynamic as the environment. From an applied standpoint indigenous fire knowledge is fluid (for example, changing with past climatic events), and the ability to read the landscape to know how, when, why and what to burn comes with proper training. The concept of ‘proper training’, however, arguably plays out differently today due to the impacts of history and politics.

Although uneven in time and space, colonial processes introduced a new paradigm of law into indigenous cultures. Colonial interests in both Australia and the USA disrupted indigenous use of fire through the removal of indigenous people from their lands, policy prohibition, and other pathways. This arguably resulted in both a forced loss of memory of land and the displacement of knowledge on fire management. Access to land is important to indigenous peoples’ memory of land, self-identify, and for their sense of belonging. The land is not only the source of traditional law and lore, it is what defines many indigenous cultures; when the ties to the landscape are compromised, so too is their culture. With colonisation, the indigenous obligations to burn as responsible environmental stewards were in many cases restricted from application at a landscape scale to memories and cultural stories. The struggle to recognise indigenous fire as a keystone process has consequently encountered many challenges and the place of indigenous burning practices in present-day landscapes continues to be a source of much contention.

Despite the impacts of colonisation, indigenous laws have remained at the root of many Aboriginal Australian and California Indian communities through their continuing operation outside present-day colonial laws. In some regions of northern and central Australia, indigenous law and practice are still applied through fires ranging in scale. For example, individual plants are targeted for food and basketry resources whereas fire is utilised at the landscape scale for hunting and environmental management purposes. In California, this happens at a fine localised scale at present although it was comparable in scale to the Aboriginal fires of Australia historically. These examples demonstrate a chain of knowledge from which to contrast indigenous and non-indigenous fire use and management practices. However, many indigenous people working with fire today are trained within the Eurocentric and patriarchal notion of fire fighting. Fire among indigenous cultures is therefore a complex affair, which has been muddled by colonial laws, policies and practices.

From our experience, the knowledge of indigenous fire practices persists in varying formats among many indigenous women and men who are either cultural practitioners or land stewards within land and fire management agencies. Their employment or engagement with such agencies reflects a need for fluidity within a culture over time for its well-being and ultimate survival. Although gender norms are interwoven into indigenous law, the stories shared with us strongly indicate that the gender of specific indigenous knowledge keepers is generation-dependent due to the impact of external social factors past and present. A temporary generational crossover of gender roles and gendered knowledge has been forged to ensure the retention of indigenous fire and land stewardship knowledge. The diagram illustrates a generalised view of this spatial, temporal and gendered trajectory of Aboriginal Australian and California Indian fire knowledge holders in New South Wales, Queensland and California.

According to our research, the layering of fire knowledge and rituals has traditionally been the purview of the ‘burn boss’—a role that seems to have fallen mainly (but not exclusively) to men. It seems that prior to colonisation, men were the holders of the fire knowledge that was applied at a landscape scale, while women held fire knowledge in the context of finer scale burning for specific purposes, such as plant foods or basketry. Even though such gendered norms and gender roles were interwoven into indigenous everyday practices, this did not seem to preclude an understanding of the underlying knowledge by the other sex. That women in many places became the main carriers of fire knowledge is directly linked to the impact of external social factors, such as male genocide.

However, recognition of whom—women or men— the knowledge and customs belong to traditionally remains with the intent of returning the knowledge to its rightful gender when time and space allow.

An example of such dynamic transitioning of indigenous fire knowledge is the ways in which Aboriginal Australians and California Indians have been able to reconnect with land they are otherwise denied access to through employment with wildfire management agencies. While agency fire management may differ from traditional burning practices and outcomes, employment inadvertently opens up an avenue for the retention and fortification of elements of indigenous fire knowledge through interaction with land. Such employment has tangible positive outcomes, such as the recorded increase in physical, mental and social health among indigenous employees and their communities. However, these outcomes can also obscure the power struggles, contrasting cultural norms, rules, and generational gendered fluidity that underpin the interaction between indigenous and agency fire knowledge.

Agency approaches to fire fighting contribute to the breaking of traditional rules surrounding what knowledge is shared with whom in the context of indigenous eco-cultural burning. Equal opportunity policies within federal and state agencies, for example, result in fire knowledge and training opportunities in theory being shared equally with men and women of indigenous and non-indigenous heritage. Another example of cultural sensitivity (or lack thereof) is the impact of wildfire fighting on indigenous sacred sites, women’s and men’s ceremonial sites, and other areas of significance. When a helicopter used an Aboriginal rock art site as a landing pad, one Aboriginal fire fighter felt the site was being “desecrated”. The traditional laws governing knowledge of and access to such sites are often related to an individual’s own role within the society and may be linked entirely to gender or restricted to initiation into a given group. In this sense, employment with wildfire management agencies is simultaneously an important element in the retention of indigenous fire knowledge through access to and caring for tribal land, and defies cultural laws and practice, which could subvert the revival of traditional indigenous burning practices. The long-term effect of agency employment on the retention and revival of indigenous fire knowledge is therefore a critical unknown.

By illustrating gendered dimensions of the temporal and spatial trajectories of Aboriginal Australian and California Indian fire knowledge holders, this article reveals how gender is at the crux of the story of how fire knowledge has been able to persist over time. Even when the practical connection to land has been hindered in the past and present, the cultural connection of indigenous laws to their source—the land—enables knowledge transfer across gender rather than knowledge prohibition caused by static gendered norms. By forging temporary generational crossovers of gender roles and gendered knowledge, the retention of indigenous fire knowledge and environmental stewardship has been ensured despite generations of externally imposed cultural hardship. These adaptive knowledge trajectories hold many lessons, which can aid ongoing discussions about how to coexist with fire in the 21st Century. In working together with indigenous communities, wildfire management agencies stand to gain through the protection of a real asset at risk, namely the cultures that have shaped our landscapes since time immemorial.

Black CF. 2011. The land is the source of the law: A dialogic encounter with indigenous jurisprudence. Routledge, London, UK.

Gammage B. 2011. The biggest estate on Earth: How aborigines made Australia. Allen & Unwin, Sydney, Australia.

Christine Eriksen is a social geographer with the Australian Centre for Cultural Environmental Research, University of Wollongong, Australia, ceriksen@uow.edu.au.