Health, disease, and wildlife conservation in the Pacific Islands 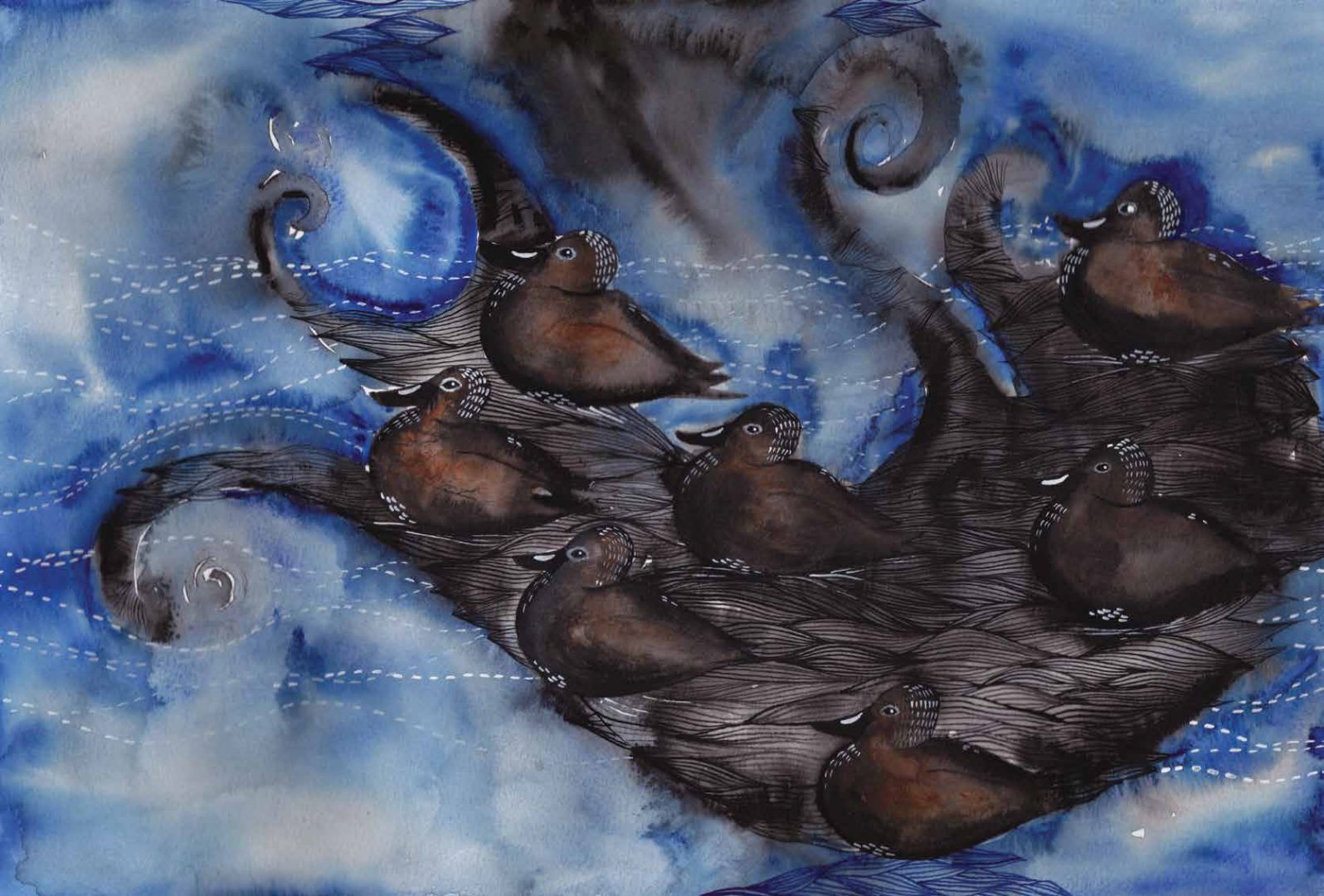 Mention “disease” or “death” in a conversation, and the listener will typically cringe, wince, and turn away in disgust. Yet disease and death are part and parcel of life as we know it and play an important role in wildlife conservation, particularly for threatened and endangered species. Like humans, wildlife die from various causes, including infectious disease and non-communicable causes of death such as predation or poisonings.

Take the Laysan duck, for example. It is one of the most critically endangered water birds of the world, found only on the small island of Laysan in the northwestern corner of the Hawaiian archipelago. These ducks forage around a shallow hypersaline lake at the center of the island and raise their ducklings near freshwater seeps around the lake. In 1993-1994, massive duck mortality occurred in conjunction with a drought. The ducks had been killed by a parasitic worm, the quick and widespread transmission of which had been aggravated by the ducks’ dense congregations around scarce sources of fresh water.

Because Laysan was the only location where the ducks existed, this die-off introduced the possibility that a future disease outbreak, in conjunction with some other environmental fluctuation (e.g., storm surges) could wipe out the population completely. To prevent this, 42 ducks were translocated in 2004 from Laysan to Midway Island, a wildlife refuge managed mainly for seabirds, sea turtles and monk seals. In anticipation of the ducks’ arrival, numerous small wetlands were created on Midway. The translocation was a success, and the duck population increased six-fold over the next three years. Unfortunately, about half of the Midway ducks were lost over a two-month period in 2008 because of botulism, a natural toxin produced by bacteria in the newly created wetlands.

Botulism mortality in waterfowl can be effectively reduced with a combination of carcass removal and water management that alters conditions sufficiently to stop toxin production, and Midway has now implemented some of these practices to stem losses from botulism. As a result, in addition to monk seals, sea turtles and seabirds, Midway must now also be managed as a waterfowl refuge.

The forensics of animal deaths

Investigating wildlife mortality is a deductive process. Wildlife health experts and biologists must consider a range of possible causes and, using data from environmental and laboratory observations, systematically and efficiently eliminate these possibilities to arrive at the most likely cause of death. Valuable clues include which species are affected, the extent and timing of the mortality, and whether there have been any changes in behaviour or land use patterns. For example, the deaths of multiple species over a short time period in a localised area might suggest a non-selective agent, such as a toxic spill, rather than an infectious disease that usually targets a given species or group of animals.

Wildlife mortality is driven by three factors: the agent or cause of mortality, the host (animal affected) and the environment in which the agent and host interact. Understanding the interactions between agent, host, and environment is what makes the study of wildlife health so fascinating. To understand how mortality impacts wildlife, you need to know about things like physiology, anatomy, molecular biology, pathology (the study of disease), veterinary medicine, animal behaviour, and animal ecology just to name a few. Clearly, no one person has a grasp of such varying disciplines, so to address such complex issues, wildlife mortality investigations are best done by an interdisciplinary team comprising animal health experts with an appreciation for ecology, and biologists with an appreciation for animal health.

Ask a biologist how his or her wildlife populations are doing, and most will answer in terms of population levels or recruitment rates: If these are stable or increasing, then things are going well. Mortality, a major driver of animal populations, is often explained away as a natural phenomenon that we can do nothing about. Furthermore, many biologists do not have the necessary expertise to investigate animal mortalities or understand why animals die. Cultural norms also play a role –disease and death are not exactly pleasant topics of conversation. As a result, many animal populations are managed in absence of knowledge of the major drivers of mortality. This is unfortunate,because if we know what kills wildlife, we can, in some instances, do things to alleviate or reduce those causes of mortality, thereby aiding recovery of animal populations. Furthermore, an understanding of wildlife health ultimately facilitates an understanding of ecosystem health. Hawaii, for example, has one of the highest numbers of threatened and endangered animals per unit land area in the world; in places like this, it is critical to understand why species are declining. Wildlife health expertise can sometimes aid biologists in identifying the cause of such declines and aid management to stem such declines.

Laboratory investigations typically begin with a necropsy of dead animals and examination of tissues under the microscope; this guides additional laboratory investigations. For instance, the presence of bacteria in tissues associated with cell death would prompt investigators to order laboratory cultures to identify the bacterium and potential cause of death. Once a cause of death is determined, then the really hard work begins: determining how to mitigate or eliminate this cause to aid recovery of the population. Achieving this requires one to know about how the agent, host, and environment interact and to identify appropriate critical points where an intervention can interrupt the cycle. For example, the discovery that mosquitoes transmitted malaria led to mosquito abatement and use of bed nets to reduce the contact between malaria-infected mosquitoes and humans. In rare cases, vaccines can be used to reduce wildlife diseases; the use of orally delivered rabies vaccines has successfully pushed the virus out of large geographic areas.

Investigating diseases of wildlife is a deductive process that follows a series of logical steps to systematically eliminate possible cause of death, and these are summarised as follows: (1) Field history– Where and when dead animals are found, location, time of year, species, age or sexes affected can all provide preliminary clues as to potential causes of death. (2) Pathology– Dissecting dead animals and describing morphologic changes of disease at the gross and cellular is critical because it provides both clues as to whether mortality is associated with infectious causes like bacteria or parasites or non-infectious causes like poisons. (3) Biodetection– Laboratory assays are used to identify and characterise suspect causative agents. (4) Laboratory trials– In case a new pathogen is found, laboratory experiments are done on animals to confirm the cause of disease; both biodetection and laboratory trials are guided by pathology. Eventually, a cause of death is confirmed, and field studies are done to understand the ecology of the disease in animal populations with a view to developing ways to manage or reduce impacts of diseases in wild animals.

Islands are, of course, surrounded by water, and what happens on land will often impact the surrounding ocean. Ecosystem degradation often manifests as the presence of sick or dying wildlife. One example in Hawaii is the turtle tumour disease fibropapillomatosis that has been linked to polluted or degraded marine ecosystems. Researchers suspect that a virus is associated with the tumours, which grow on the eyes, mouth, and skin, and cause turtles to waste away and die. Unfortunately, this disease is difficult to manage at this time because researchers have not yet established an unequivocal link between the virus and tumour development. For this to happen, it will be necessary to culture the virus in a laboratory and then experimentally reproduce the disease in turtles. Unfortunately, growing the virus in the lab has proved elusive. This is one of many examples of the challenges faced by wildlife health professionals who often lack the necessary laboratory tools to investigate disease in the myriad animals they encounter, and who therefore must develop them de novo.

If we do not have the laboratory tools for charismatic megafauna such as turtles, imagine how difficult it is when investigating diseases in less loved life forms, such as molluscs and other invertebrates. For many of these species, we know little about physiology, anatomy, or behaviour. Yet the health of these organisms can often drive the health of entire ecosystems. For example, tropical marine ecosystems are underpinned by tiny animals called corals that form massive reef structures and provide habitat for myriad fish and other invertebrates. By buffeting the effects of storm surges, corals also protect human communities living along the coasts. Corals are an extreme in wildlife disease ecology, in that the animal is, in essence, the environment. Loss of coral reefs is analogous to loss of rainforests, and in some regions of the world, such as the Caribbean, diseases have decimated coral reefs over the past 30 years. Unfortunately, because biologists and wildlife health experts did not team together to address the problem, we know little about the cause of coral diseases and their declines. In the Pacific Ocean, home to the highest diversity of corals, we are trying to avoid a repetition of this mistake by applying some of the standard biomedical tools we use for other wildlife species to figure out what is killing corals—with the hope that this knowledge will allow us to manage and mitigate the effects of disease on these populations.

As these examples show, the developing field of wildlife health is intellectually exciting, and promises to yield much new information about infectious and non-infectious causes of mortality in terrestrial and marine ecosystems. In this day and age of specialisation, there are few fields that afford the opportunities to work with such a variety of organisms, disciplines, and ecosystems in a truly integrative fashion. Biologists and wildlife health experts working in concert have much to learn and discover as they strive to maintain healthy ecosystems and conserve natural resources and species in an ever-changing world.