Here there be monsters (for now) 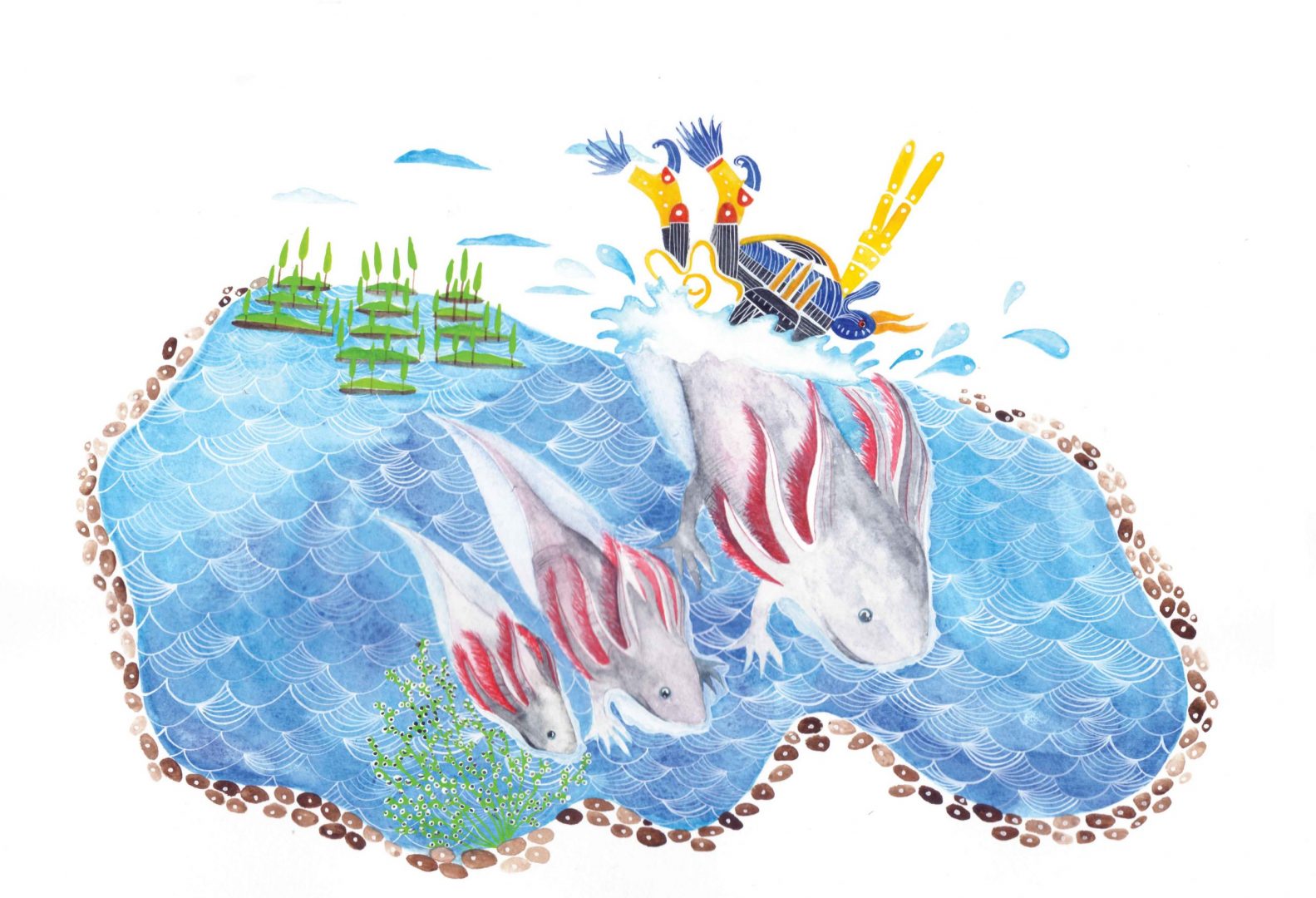 Ambystoma mexicanum is a species with many names. In addition to its Latin binomial, it goes by “Mexican salamander,” “Mexican walking fish,” and “axolotl”—the last of which is a Nahuatl word that translates, dramatically, as “water monster”. Whatever you choose to call it, A mexicanum is a fascinating animal with an unusual life history that may one day help medical researchers develop improved techniques for treating traumatic injuries, and potentially even increase human lifespan. Yet, ironically, although abundant in laboratories and collections around the world, the axolotl is critically endangered and may soon be declared extinct in the wild.

Although axolotls have a long history of being used as food and medicine in the New World, they were not known in Europe until the mid-19th century, when specimens were sent from Mexico City to the Jardin des Plantes in Paris. There, the zoologist Auguste Dumeril began studying the unusual characteristic that makes the axolotl so interesting to modern scientists: paedomorphism, or the maintenance of juvenile physical features into adulthood.

Like the majority of its fellow amphibians, the axolotl begins its life as an aquatic larva. Feathery gills, splayed around the animal’s face like a lacy Elizabethan ruff, allow it to extract oxygen from water. The axolotl also sports unlidded eyes, small limbs, and a pronounced fin running along its spine and onto its thick tail—traits that are common in all larval amphibians. These characteristics, along with the animal’s large size (axolotl larvae can be up to 46 cm long), give it the appearance of a giant tadpole from an alien world.

Unlike tadpoles, however, the axolotl does not usually undergo a full metamorphosis, the process through which typical amphibians prepare themselves for emerging from the water and transitioning into a terrestrial life. The axolotl does not lose its gills or tail, or grow larger limbs to help it move onto land and navigate through the undergrowth. Instead, it experiences what is called neoteny, or delayed development: it keeps its larval traits and simply continues to expand until it reaches full size and sexual maturity at approximately 18-24 months of age. After this, the axolotl looks and behaves the same for the remaining decade or so of its life.

Thanks to the work of Dumeril and his successors, we now know that axolotl neoteny is at least partly caused by a deficit of thyroid stimulating hormone. This chemical tells the thyroid gland when it is time to produce thyroxine—a different chemical that regulates metabolic activity and, therefore, the body’s transition into adulthood. Thyroxine production is dependent on the axolotls’ ability to consume adequate levels of iodine, a commodity that is generally scarce in their habitat—(sometimes, especially when these animal breed at high densities, larvae obtain their dietary iodine requirement by consuming other larvae). An additional hindrance to metamorphosis may be the coldness of the water in which axolotls live, since low temperatures reduce the efficacy of thyroxine. While these conditions cumulatively favour the lifelong retention of juvenile traits, it is biologically possible for axolotls to undergo metamorphosis and seek a terrestrial existence—as has been observed in their geographical neighbour and close relative, the Plateau tiger salamander (A. velasci). This is uncommon in the wild, but can be stimulated easily in captivity by an injection of iodine or thyroxine. Although this might seem like an extravagant parlor trick, it has been integral to studies of what is, perhaps, the defining feature of axolotls: their healing ability. 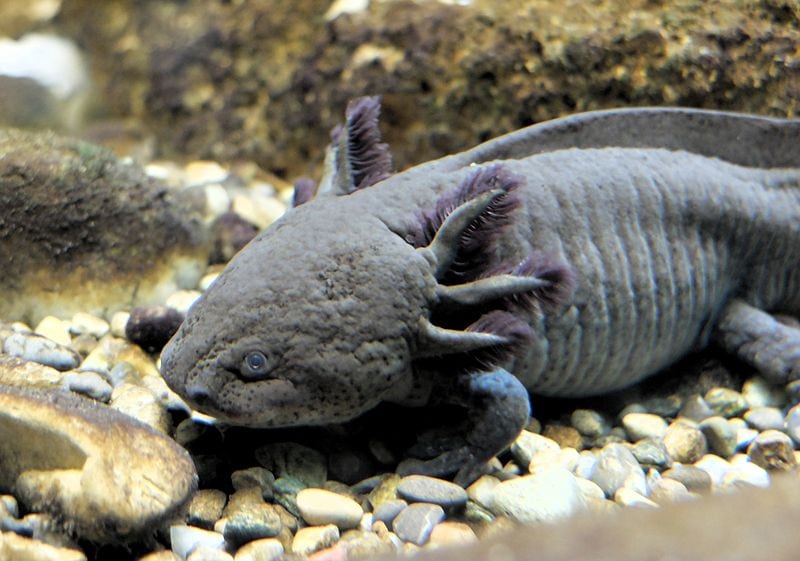 If an axolotl is cut, its wound will heal over without producing a scar. If it suffers a trauma to part of a limb, it can repair the damage and eventually regain normal function. However, what is truly amazing about the axolotl is that, given enough time, it can completely regrow entire structures, including tails, legs, and even parts of its brain. Further, if organs are transplanted from one axolotl to another, the recipient will readily integrate the foreign components and eventually use them as if they were its own. Because these “talents” are most pronounced before an axolotl undergoes metamorphosis, researchers are particularly keen to understand how, why and when exactly the shift to adulthood makes healing more difficult. This information has obvious implications for both human and veterinary medicine, especially for a range of injuries that previously meant lifelong disability, paralysis, or certain death.

Although axolotls are special for their remarkable ability to recover from trauma, the neoteny that facilitates this trait has been observed in a number of other species. A survey of the natural histories of neotenic organisms suggests that the characteristic may be at least partly linked to habitat: Neoteny is particularly common in environments where it is difficult or dangerous for aquatic juveniles to make the transition to terrestrial habitats—especially those where the animals need to locate scarce resources while navigating rough terrain and avoiding desiccation.

This is an apt description of axolotl habitat—the high-altitude Laguna Alchichiga region located to the southeast of Mexico City. The area once boasted five lakes, or lagunas (Chalco, Texcoco, Zumpango, Xaltocan, Xochimilco), that sustained generations of Mesoamerican cultures. The two freshwater lakes, Chalco and Xochimilco, were a useful source of water for both humans and their crops; the Aztecs used these bodies of water to create a system of chinampas, or “floating gardens”, in which a series of drainage channels were interspersed with small plots of arable land that could be used to grow food crops.

Even before the appearance of humans, the Alchichiga region was a challenging place for the axolotl to live. Water temperatures fluctuate greatly, dropping as low as 6°C and soaring to as high as 20°C; the lakes experience intermittent periods of flooding and drought; and there are a number of terrestrial and aerial predators ready to snatch up any axolotls that venture onto land. Life only became more difficult once the Aztecs and their successors settled the area. Because axolotls were considered a delicacy—reportedly tasting like eel— they were regularly hunted for food; their fat was also processed into a syrup that could be used as a nutritional supplement. Perhaps most catastrophic to the axolotl was the drainage of Lake Chalco to prevent flooding and facilitate the expansion of Mexico City and its suburbs. Lake Xochimilco was similarly reduced, leaving the dwindling axolotl population to eke out an existence in the few freshwater ditches and pools that remain in the Alchichiga area.

Recent surveys suggest that wild axolotls occupy no more than 10 sq. km of fragmented and degraded habitat. The water in these areas is often polluted by chemicals, sediments, and microorganisms. Even where it is clean enough to foster growth of vegetation on which axolotls can secure their eggs, the water may still be home to other dangers such as invasive fish (including carp and tilapia), that eat young axolotls and their prey. As a result of these challenges, axolotl numbers have decreased markedly in recent years—in 1998, surveyors located nearly 6,000 individuals per sq.km; over the next decade, the number dropped to 1,000 and then to 100; in January 2014, researchers could find no axolotls at all. 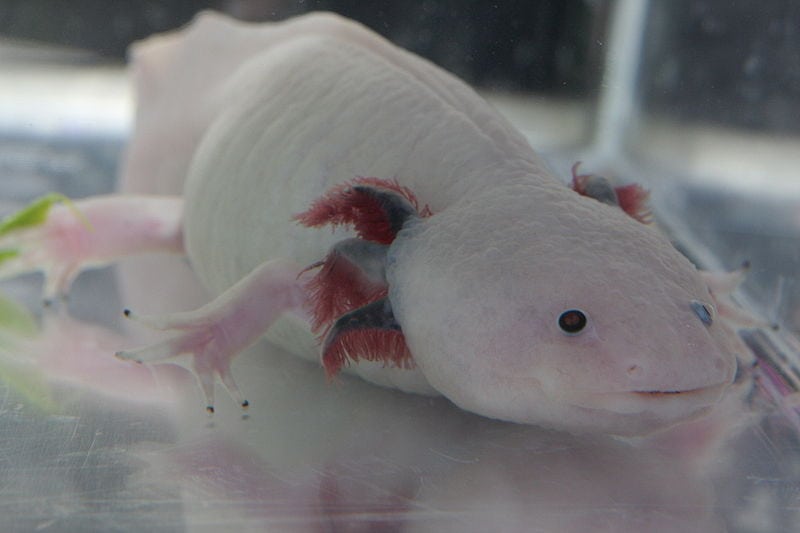 Axolotl in the laboratory

Despite these trends, axolotl conservationists are not ready to give up on this unique salamander. In addition to its bizarre appearance and regenerative powers, the axolotl also boasts a connection to the Aztec god of deformations and death. Thus, while it may not be the cutest or cuddliest of organisms, it is undeniably striking, memorable, culturally relevant, and strangely charismatic—a combination of traits that may allow it to function as a flagship species for conservation throughout the Alchichiga region.

Perhaps most promising is the fact that Lake Xochimilco, a popular tourist destination, has received international recognition through both the UNESCO list of World Heritage Sites (1987) and the Ramsar Convention (2004). The axolotl was recently chosen as the figurehead for a Darwin Initiative project aiming to educate Xochimilco visitors about the lake’s ecosystem and its economic and ecological benefits. Among other initiatives, the project included wildlife surveys, guidetraining workshops for the boatmen who punt thousands of visitors around the canals on large flat-bottomed boats (trachineras), and efforts to help artisans establish souvenir-selling businesses. A field station situated along the shore of Lake Xochimilco provides space for both education about, and scientific study of, axolotls and other wildlife that share their wetland habitat. Visitors may not be able to see free-ranging axolotls, but they can view some of the many live specimens that are kept there in aquaria for research and breeding purposes.

In the future, some of those captive animals may be used to re-establish axolotl populations in the wild—but only if two conditions are met. First, the habitat needs not only to be restored, but also protected; if it is not, the axolotls are unlikely to survive and successfully reproduce because they will have no environment in which to do so. Second, conservationists must work to ensure that only healthy individuals are released. The latter goal may sound easier to achieve than the former, but “health” is a complex issue that encompasses not only disease but also genetics and behavior. Captive breeding can inadvertently select for particular traits that may not be favourable—or may even be actively harmful—in the wild. Preliminary genetic work has suggested that captive-bred axolotls have lower levels of genetic diversity, which means that they may be less able to respond to environmental pressures such as those associated with human disturbance and climate change. Additionally, variations in size, survival, reproductive output, and even colour can prevent successful mating between individuals from different populations of captive axolotls, and between captives and their free-living brethren. The urgency of establishing wild populations of axolotls cannot be overstated. Already, some captive axolotls have shown signs of losing some of their regenerative capacities over many generations, suggesting that robust wild populations are needed to keep this species viable over the long term.

Right now, the future is very uncertain, but there are glimmers of hope. In February 2014, in an unexpected and happy turn of events, biologists from Mexico’s National Autonomous University spotted two wild axolotls in Xochimilco. The animals could not be caught for use in captive breeding programs, but perhaps they will reproduce in their native waters. To facilitate this and other conservation interventions in the Alchichiga region, an international team of researchers met recently in Mexico to write an updated axolotl action plan. Their management recommendations, due to be released by the end of 2014, will usher in the next phase of axolotl conservation efforts—that, hopefully, will allow us to one day add “survivor” to the long list of names used to describe this remarkable species.