How and why animal diseases impact humans 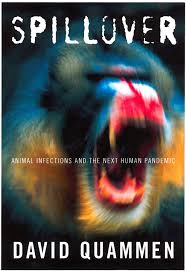 Several years ago, I had the opportunity to interview award-winning science and nature writer David Quammen, author of (among other things), Monster of God, Flight of the Iguana, and The Song of the Dodo. At the time, he was celebrating the 200-year anniversary of Charles Darwin’s birth by touring the United States to read from The Reluctant Mr. Darwin, Quammen’s “intimate portrait” of the biologist who developed the theory of evolution.

Towards the end of our conversation, I asked Quammen if he was working on anything new. It turned out he was: something to do with animal diseases that could be transferred to humans. I was surprised; the majority of Quammen’s previous books had focused predominantly on megafauna—particularly endangered species—and the increasingly threatened wildernesses in which they live. This new book sounded like quite a departure.

As it turns out, that is not exactly the case.The book, which was not finished until nearly three years after our conversation, was published in late 2012 under the title Spillover: Animal Infections and the Next Human Pandemic. A perusal of Spillover reveals that Quammen’s favourite themes are still present, but are examined from a different perspective and at a different scale. The megafauna are, more often than not, humans, and the ecosystems are both those through which we move and those that are found within our own bodies.

As a result, Spillover is, in many ways, the most personal of Quammen’s books to date. It should have particular resonance with readers who have nervously noticed the increasing frequency with which new disease outbreaks have been reported— diseases such as bird flu, SARS and Nipah, all of which have their origins in non-human animals. The book describes both why and how such pathogens are shared between humans and our animal neighbours; it also explores whether we can use information from previous and current zoonotic epidemics to predict those that might occur in the future.

Spillover has much to commend it, but two strengths in particular: its treatment of scientific research and the people who conduct it, and its conversational, easily accessible prose. Together, these give the book the intensity and excitement of an adventure novel, but also a breadth, depth, and accuracy that make the book a legitimate educational resource. Where many authors might have been content to merely summarise the major points of published papers, Quammen travelled the world to interview researchers on the front lines of epidemiology: scientists sampling bats in Australia and Asia, primates in Africa and monkeys in Bangladesh. As a result, the author provides not only detailed background information and accessible definitions to scientific terms, but also vivid first-hand descriptions of how immunological work is conducted in the field.

The plethora of case studies examined in Spillover—Hendra, ebola, SARS, Nipah and HIV, to name a few—act as variations on a theme, driving home the point that nearly all spillover events have certain characteristics in common, even if the associated infectious agents vary in location, virulence, transmissibility, and innumerable other traits. Indeed, Quammen describes disease outbreaks as a perfect storm of factors—“Maybe luck… Maybe circumstance. Maybe [population] density. Maybe genetics. Maybe behavior.”

However, the author also takes pains to emphasise that humans do not have to passively accept their fate as pathogen hosts. By combining our brainpower with modern technology and the scientific method, we have a fighting chance of identifying “the next big one” before it becomes big—or, at the very least, of responding to it efficiently and effectively once it does make the leap from wildlife into humans. Thanks to this optimistic message, Spillover is an engrossing, informative, and ultimately rather hopeful book.

The following excerpt, from Chapter 74 of David Quammen’s Spillover, describes the author’s experiences volunteering as a field hand in Khulna (Bangladesh), helping a team of epidemiologists investigating whether local bats were carriers of the deadly Nipah virus.

The bats were all out for their nightly feeding. We would lurk here to catch them as they returned, sometime before daylight. Gofur and Pitu had already hoisted the net into place, an invisible wall of delicate mesh in the blackness somewhere above us, big as the screen for a drive-in movie. We hunkered down to wait. The night grew chilly– the first time in my limited Bangladesh experience I’d had occasion to get cold. I lay on my back upon the tarpaper, bundled as best I could be in a light jacket, and went to sleep. The first bat hit the net at 4:22 a.m.

Headlamps came alight, people jumped up, Gofur lowered the net on its pulleys while Epstein and Pitu converged on the animal and I staggered forward after them, safely blinded behind my safety glasses. Pitu untangled the bat and Epstein accepted it, using just the technique he had described: grabbing its head firmly, taking its legs and arms into his finger gaps—binga, binga, binga, binga— and then jouncing the bat into its bag. Close the bag’s net, tie firmly with a piece of twine. Captured bats, like captured snakes, evidently relax better if you confine them in soft cloth. Reraise the net and repeat. I was impressed by the proficiency of Epstein’s team.

Between the first bat and daylight, before call to prayer even sounded from the local mosques, they bagged five more. Six bats for a night’s work was below par for Epstein—he liked to average about ten—but it was a good start for a new location. Adjustments to the net placement, to the height of the masts, would improve the yield here in coming days. For now, enough. As dawn filtered in, we climbed down the ladder and repaired to the laboratory room. Here again, everybody had an assigned role. Mine was to stay the hell out of the way, and occasionally to assist with a swab.

Three hours later, blood samples drawn, swab samples taken, tubes in the freezer tank, it was time to release the bats. Each of them first received a drink of fruit juice to help restore bodily fluids lost in the blood draw. Then we all walked back to the grassy courtyard, beneath the karoi trees, where a small crowd of men, women, and children from the neighborhood had gathered. (The walls of the old depot compound were permeable to locals when something interesting was afoot.) Epstein, again now wearing welder’s gloves, released the first five bats one by one from their bags, holding each animal high so it wouldn’t crawl up his face, letting it free its legs and its wings, then relaxing his grip gently just as the wing beats began to find purchase on air, and watching—all of us watching—the animal catch itself short of the ground, rise slowly, circle languidly, and fly away. Eventually, after a circuit or two of the compound, a few minutes of befuddled relief, it would find its way back to the communal roost, sadder but wiser and no great harm done.

Before releasing the last bat, Epstein gave a brief talk to the assembled citizens, translated by Arif, congratulating them on their good fortune as a village at harboring so many wonderful bats, which are helpful to fruit trees and other plants, and assuring them that he and his colleagues had taken great care not to harm the animals while studying their health. Then he let the final bat drop. It climbed through the air, from knee level, and flew away. Later he said to me: “Any one of those six bats could have been infected. That’s what it looks like. They look totally healthy. There’s no way to distinguish Nipah virus. That’s why we take all these precautions.” He dipped his boots again in the sterile footbath, as we left the lab, and washed up at the village pump. A little girl brought soap.

Caitlin Kight is an editor, writer and educator affiliated with the University of Exeter’s Penryn Campus, caitlin.r.kight@gmail.com. http://www. caitlinkight.com.