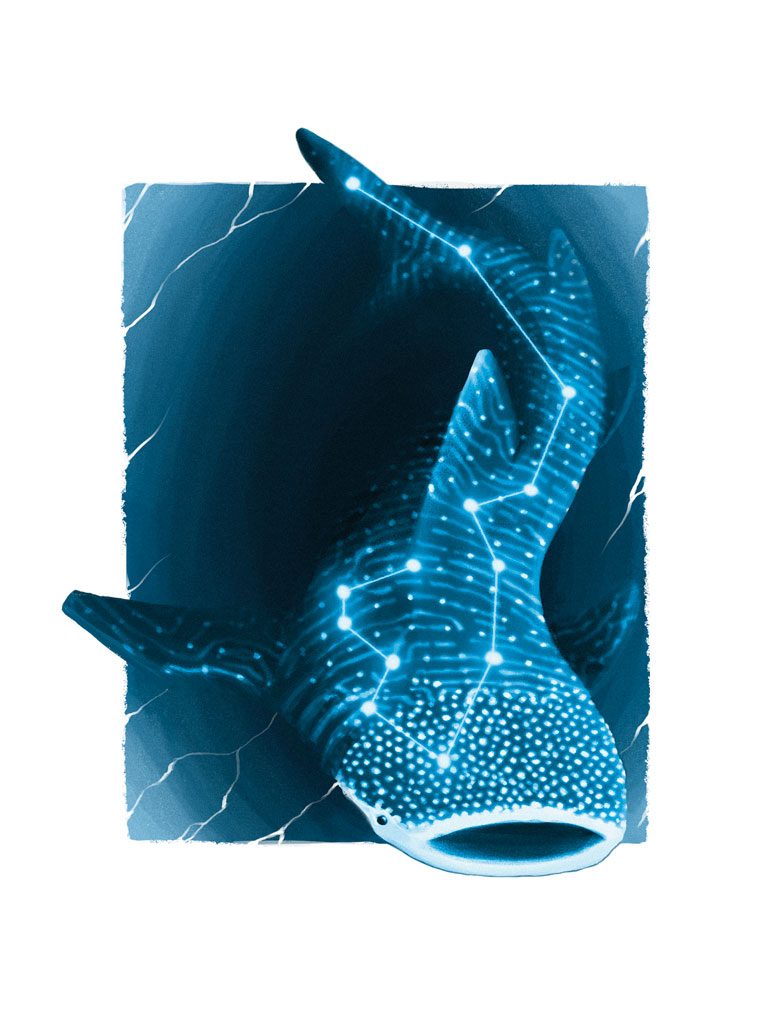 In the summer of 2016, I volunteered with a small group of fellow field researchers to collect conservation data on whale sharks in Baja California, Mexico. Our conservation data was collected with cameras, waterproof slates for documentation of data, and measuring tape to measure the length of the whale sharks we encountered. All of our cameras varied in style and price, from a GoPro to a cell phone inside a protective underwater sleeve. We each used our own underwater camera to capture photo-identifications of various whale sharks in the Sea of Cortez. Once a whale shark was spotted near our small fishing boat, a few of us would slowly enter the water and swim towards it. Submissions of photo-identifications have to remain raw images and cannot be zoomed, cropped, edited, or altered in anyway, since it affects the integrity of the data. To capture Figure 1 accurately, I had to swim closely and calmly alongside the whale shark while steadying my camera to record an effective photo-identification. While two of us photographed the shark, another researcher would swim underneath the whale shark to record its sex. We quickly measured the length of that whale shark with measuring tape or against the length of the fishing boat and reassembled on the boat to record our data onto the slate. As Figure 2 highlights, the data collected consisted of sex, length and any identifiable markings. If a whale shark had noticeable identifiable markings, such as a boat injury to the dorsal fin as seen in Figure 3, this was also photographed as data. Once back on land, we uploaded our data onto a computer and submitted it to Wildbook for Whale Sharks. 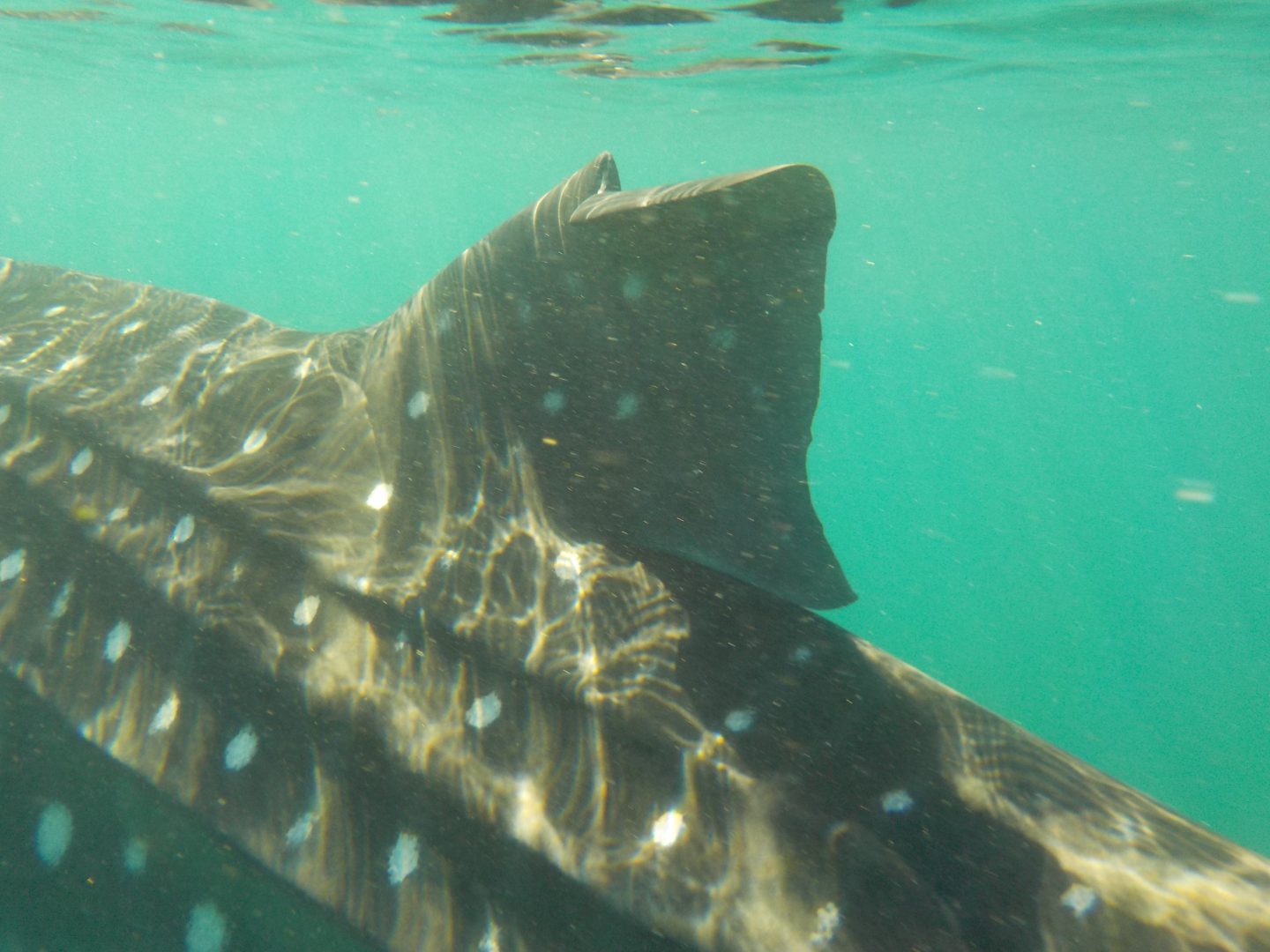 Figure 1. Photo-identification of a female whale shark on her right flank 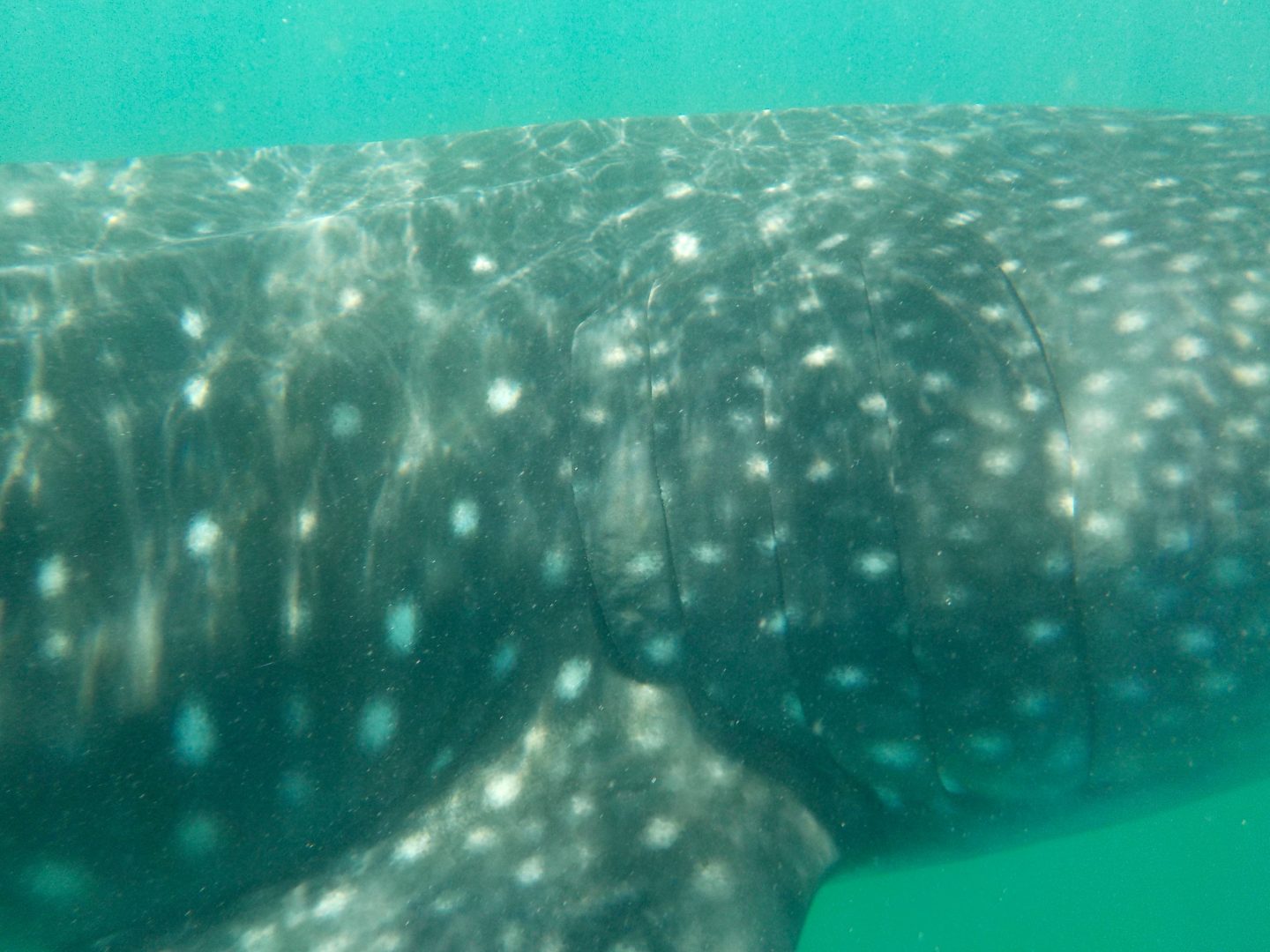 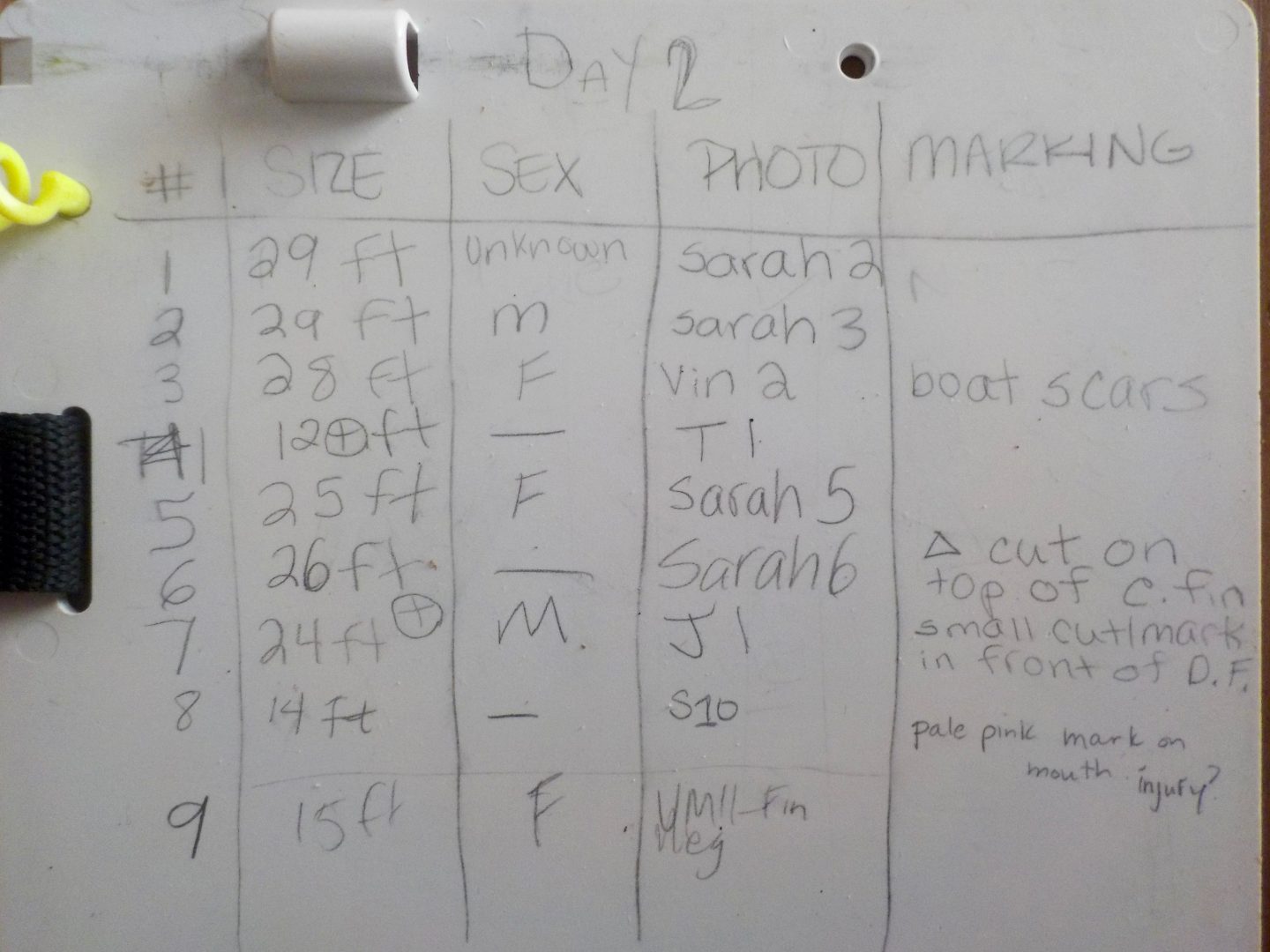 Figure 2. Photograph of the rough data chart recorded on the boat

Whale sharks are the world’s largest living fish although little is known about them. Whale sharks ( Rhincodon typus) are the largest fish in the world, estimated to reach lengths between 35 – 55 feet. The whale shark is a pelagic, migratory species that is found worldwide in tropical waters. They are filter feeders, which means as they swim they suck in water through their large, 5 foot wide mouth and filter out plankton. Whale sharks have around 300 tiny teeth within their mouth, but the purpose of their teeth is still a mystery. The whale shark gives birth to live young, although the average number of pups born in one litter is still relatively unknown. There is little to no information on key aspects of whale shark biology, such as breeding habitats, lifespan, reproductive/growth rates, basic behavior and pup survival rates. Recently, the International Union for Conservation of Nature, IUCN, Red List of Threatened Animals has updated the whale shark conservation status from vulnerable to endangered. Conservation policy depends on biological, ecological and demographic data of a threatened species, which in this case is complicated since little is known about the whale shark to enact worldwide conservation laws. Reliable existing data do not currently exist on whale sharks, which threatens their worldwide conservation status. To protect the whale shark, more data is currently being collected through the use of cameras. 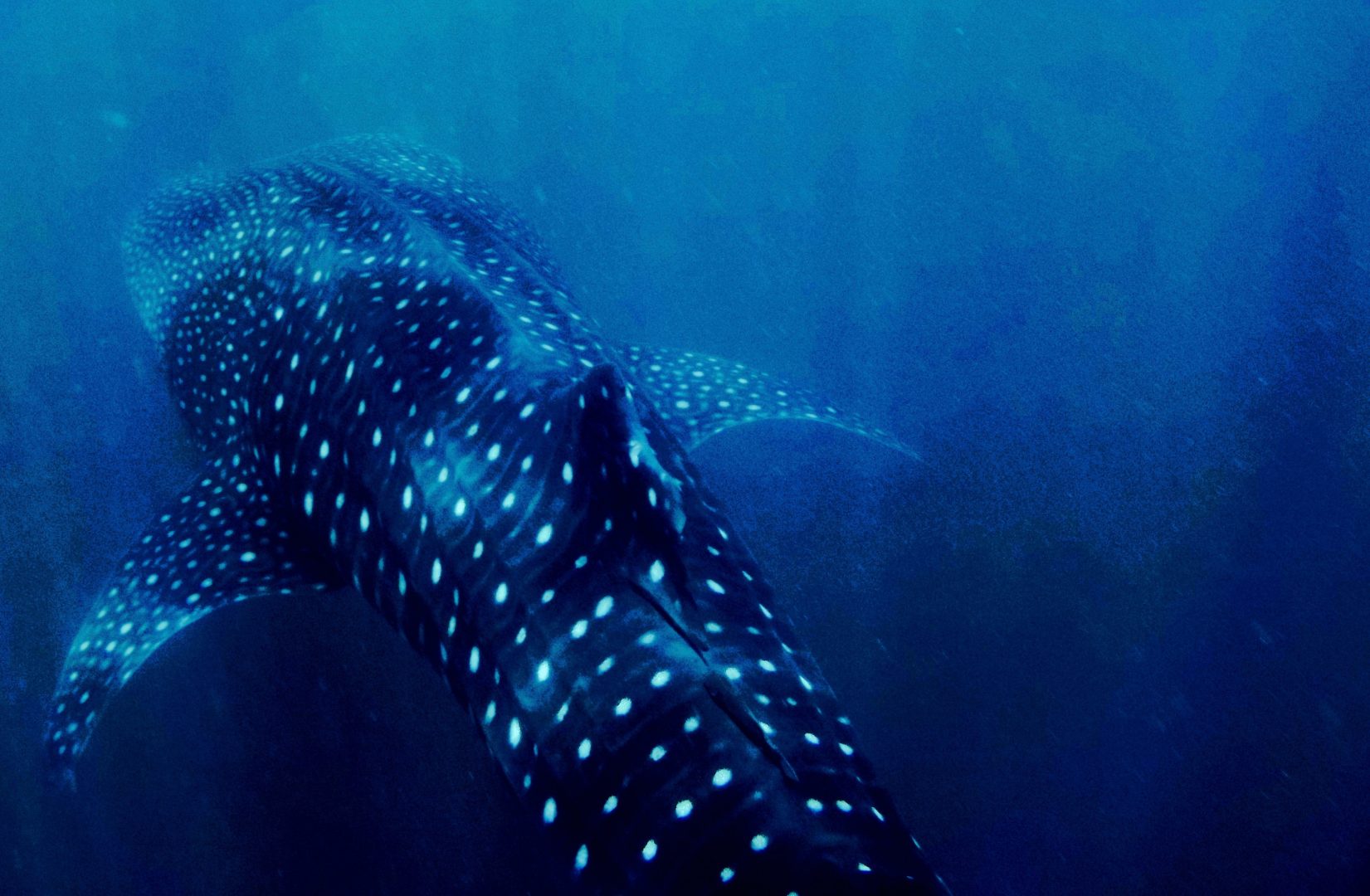 Pattern-matching Algorithm Software System Wildbook for Whale Sharks is a public photo-identification library on whale sharks where people upload their photo-identification photographs. This website boasts a software system that has been developed from an algorithm originally designed for astronomy for star pattern recognition, see Figure 4, to recognize the unique patterns of individual whale shark markings.

A collaboration between whale shark biologists, Ben Norman and Jason Holmberg, and NASA astrophysicists Zaven Arzoumanian and Ed Groth, who created specialized algorithms for the Hubble Space Telescope, created a pattern-matching algorithm software system that compares two lists of coordinates ( x, y ) that identifies individual points to form a geometric pattern within the spots of the whale shark pattern. 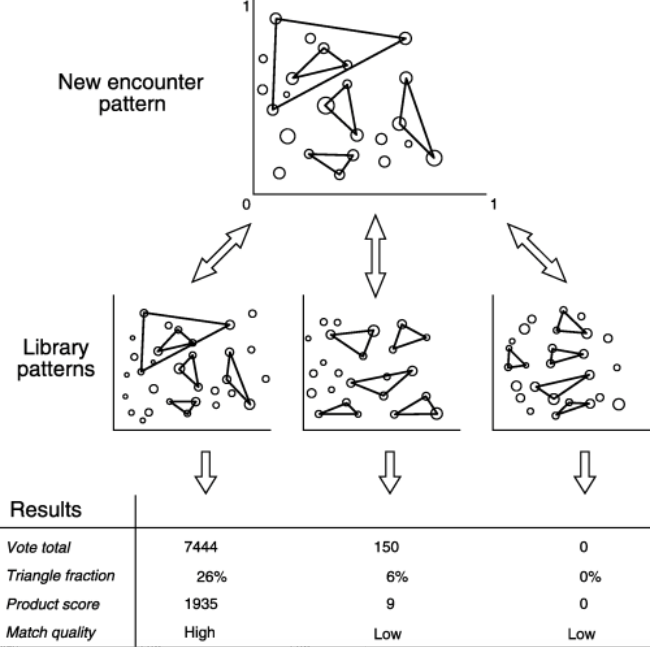 Conservation The field of conservation has benefited greatly from technological advancements, such as cameras and software systems, and from new methods for communication of data among researchers. Cameras have proven to be an effective conservation tool from photo-identification of species, such as whale sharks, to camera traps and camera drones. Cameras are used in tracking wildlife, studying animal behavior, identifying migration patterns, monitoring survival rates, management of population demographics and preventing illegal poaching of endangered animals. Photo-identifications of whale sharks will be used to gather more information on the species, from population demographics to migration patterns, to protect and update its worldwide conservation status. Cameras have always been an entertaining way to capture the daily moments within our lives, but cameras are also an essential tool in conservation and the survival of magnificent species, such as the whale shark.

Talia Nicole Tamson has studied and participated in conservation research in Mexico, Australia, Costa Rica, Namibia and Thailand. She currently resides in Chicago, IL as an educator.

Adwait Pawar is an artist and illustrator based out of Bangalore who is passionate about wildlife, traveling and storytelling. He tries to combine the three as often as he can.