How costly is it to be vigilant? 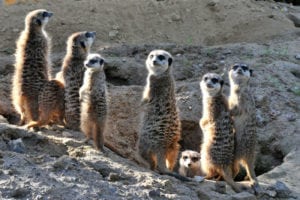 Meerkats (Suricata suricatta) are always found in groups. While most members of the group search for food, there is always one on guard watching for predators.

Animals in the wild have to constantly watch their backs in order to survive, even if it means compromising on feeding time. They have evolved to exhibit variations of this vigilance behavior, depending on their surroundings, the number of group or family members with them, etc. Is one strategy better than another? Do some species have a better chance of survival because their strategy is more efficient than that of others’?

Aliza le Roux and colleagues tested this by following two different species—the yellow mongoose which forages alone or in small groups of two to seven members, and the social meerkat that moves in groups of up to 18 members. They observed the animals for 2 years and recorded their births and deaths, nearest refuges and plant cover. They found that the presence of group members did not affect vigilance patterns in either species, but they showed different overall strategies. While the meerkats spent more time looking down and foraging, mongooses were alert more often. The latter were found closer to safety more often than meerkats and also spent more time under complete cover.

Like many other small mammals, both species remained close to cover and refuge, the mongooses more so because they did not have as many other eyes scanning the area. Despite these differences in their behavior, both species showed similar chances of survival, indicating that both strategies were efficient in helping them avoid their predators.

READ AN INTERESTING PAPER YOU LIKED ?

To contribute summaries of research articles, write to the editor, or submit online by logging on to www.currentconservation.org