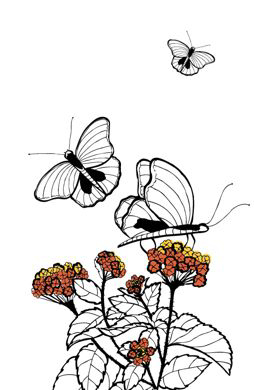 There are a growing number of invasive species in ecosystems around the world. One such invasive species is Lantana camara. Key biological attributes of lantana that make this species among the world’s 100 worst invasive weeds include fitness homeostasis, phenotypic plasticity, widespread dispersal by birds that feed on its fruit, a broad geographic range, vegetative reproduction, !re tolerance, ability to compete effectively with the native flora, and allelopathy.

It is not clear how lantana arrived in India, although there are anecdotal references to the introduction of lantana as an ornamental in the early 19th century. lantana may have been introduced into India on multiple occasions—as an ornamental plant in Coorg and as a hedge plant in Calcutta. Wecan trace its spread in Nainital district of India: it was introduced around 1905; till 1911 it was confined to hedges and was sparsely distributed; by 1929 it had become widespread, forming dense thickets in farms, pastures, fallows, and forest areas. Lantana has invaded most Indian pasture lands (13.2 million ha) besides forest and fallow areas, and the cost of its control is estimated to be US$ 70 per hectare. Indian populations of lantana have been around for a long time (about 2 centuries). This would suggest that lantana has had time to evolve and become locally adapted. However, it is difficult to attribute the success of lantana to any one factor alone, and one could invoke different hypotheses to explain its success at di$erent stages of the invasion process (see over-leaf).

Consequences of lantana invasion, particularly on the native flora, are little understood and need to be studied. Our studies provide a qualitative and quantitative overview of the effects of lantana on ecosystem structure and function in tropical dry forests of northern India. Many species of tropical dry forests have small local populations, but several of them exhibit declining or even severely depleted populations in lantana-invaded locations. Such invasions create demographic instability among native tree species, reduce tree diversity, and could even change the structure of the forest in the near future (examples of species with declining populations include Acacia auriculiformis, Adina cordifolia, Boswellia serrata, Briedelia retusa, Buchanania lanzan, Cassia fistula, Elaeodendron glaucum, Emblica offi- cinalis, Eriolena quinquelaris, Hardwickia binata , Miliusa tomentosa, Schrebera swietenioides). Lantana can also have a devastating impact on the rich herbaceous understory.

We also observed that lantana litter inputs increase with increasing lantana cover and that the chemical composition of lantana litter is very di$erent from the chemical composition of native forest species litter. The high nitrogen and low lignin content of lantana litter and the favorable microclimate beneath lantana canopies favour faster decomposition and release of nitrogen. #is alteration in litter inputs and chemistry beneath lantana positively and signi!cantly alter soil nitrogen availability, nitrogen mineralization, and total soil nitrogen, leading to a positive feedback: lantana increases soil nitrogen availability, and  this, in turn, favours the growth of lantana. Our research suggests the need for prioritization of issues, designing of
hierarchical management, and adaptive management strategies in response to lantana invasion. New research approaches warrant further investigation with more in situ experimentation. There is also an urgent need for information regarding the current and the potential distribution of lantana, for its monitoring, control, and possible eradication. All this can only be possible through increased public awareness of the harmful impacts of lantana on our landscapes. Amalgamation of all this will create a promising environment in which lantana research can be promoted, funded, and nurtured through a ‘Lantana working group’ for India.

Biologists have invoked a number of potential explanations, or hypotheses, for the success of invasive species.
Fluctuating Resource Hypothesis: The ability of invasive species to preemptively take advantage of resources (light, soil nutrients,
space) that become available following a disturbance.

Presence of Empty Niches: Some species-poor ecosystems, such as oceanic islands, are thought to be more vulnerable to invasions
than species-rich ecosystems.

Enemy Release Hypothesis: Invasive species are often thought to be successful in their introduced environments due to the
lack of natural enemies to keep them in check.

Evolution of Increased Competitive Ability: Freedom from enemies (herbivores or predators) might allow introduced species
to allocate resources to growing larger, or faster.

Novel Weapons: Invasives may spread rapidly in new environments due to weapons like antimicrobial or allelopathic chemicals
they exude from roots, which may inhibit other species in their new environments-the Allelopathic Advantage Against
Resident Species of some invasive species is an example.

Gyan Prakash Sharma is at the Department of Environmental Biology University of Delhi, New Delhi, India. Mail at gyanprakashsharma@gmail.com

AS Raghubanshi is a Professor of Botany at Banaras Hindu University, Varanasi, India