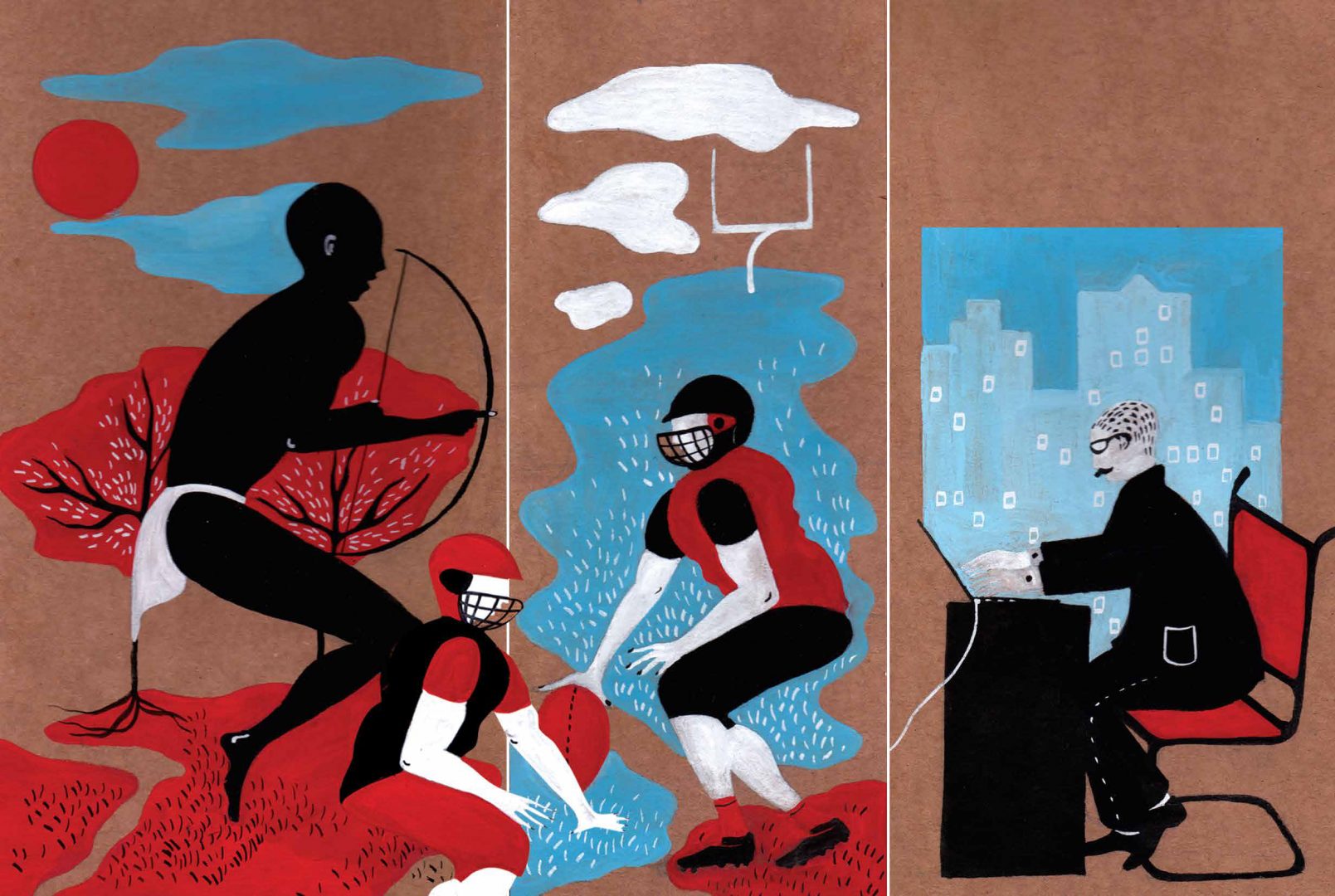 Current wildlife research in India is mainly driven by conservation priorities. Often, studies that do not have a conservation implication are treated as a sinful luxury. What is less appreciated is that basic wildlife research can yield many important insights into the fundamental principles of life, behaviour, society and health. Health is an ecological phenomenon: when you consider infectious disease as an interaction between two or more species, it becomes intuitive to consider it an ecological process. However, current opinion suggests that even non-infectious diseases, such as type 2 diabetes, hypertension and cardiovascular disease can be better understood as ecological processes. Increasingly, many principles of evolutionary physiology and animal behavior are providing a radically different and insightful view of the disease process.

Our major understanding of human diseases comes from experiments on captive animals. However, certain intricate patterns can only be revealed through wildlife research. Wildlife data have contributed to our understanding of some of the modern lifestyle-related disorders, and we will illustrate this using the example of type 2 diabetes.

A global burden of haunting diseases

Diabetes, one of the oldest diseases described in humans, has had an unprecedented impact on modern human health. In 2011, 366 million cases of diabetes were reported worldwide; this number is expected to rise to 552 million by 2030. The number of people with Type 2 Diabetes Mellitus (T2DM) is increasing in every country. India, with its huge numbers of T2DM patients, is considered the diabetes capital of the world. Though diabetes has been intensely studied, the exact cause and mechanism of the disease remains shrouded in mystery, and no permanent cure is in sight. T2DM begins with insulin resistance—the inability of cells to respond to the hormone insulin like normal cells would. Insulin resistance is usually associated with high levels of glucose, though which of the two comes first is debated. The current belief is that insulin resistance is central to T2DM, with blood sugar rises resulting from an inadequate insulin response.

There are three main hypotheses as to why T2DM is incurable. First, it may be associated with some sort of irreversible physiological or morphological change. If this is the case, then diabetes would function like retinal damage, which is permanent because retinas cannot regenerate in humans. However, recent research has shown that this is unlikely. The two main components believed to cause diabetes, namely insulin resistance and degeneration of beta cells, are both reversible. The second possibility is that the pathological components of diabetes are not, by nature, irreversible, but we do not have the technology to reverse them. This is also unlikely since there is extensive work on insulin sensitisation and stimulation of insulin secretion, both of which are unable to cure diabetes once it emerges.

The final possibility is that our current understanding of type 2 diabetes is fundamentally wrong, and therefore we have not yet been able to determine the correct approach for curing it. The lack of support for the first two possibilities makes the third more likely. This might be true not just for diabetes, but also for a number of other modern lifestyle disorders, including hypertension, cardiovascular disease, osteopenia, polycystic ovary syndrome, and chronic fatigue syndrome—all of which are increasingly prevalent but not yet well understood.

Behavioural syndromes and their accompanying physiologies

The concept of ‘hawk’ and ‘dove’ behaviours was introduced by John Maynard Smith, a British evolutionary biologist and geneticist. In a conflict situation, a ‘hawk’ behavior is an aggressive one, with the individual willing to risk the negative outcomes of an attack or fight. ‘Dove’ behaviour, on the other hand, avoids physical aggression, often through the use of deception. Whenever a ‘hawk’ and a ‘dove’ enter a conflict, the dove always retreats and the hawk wins. This may suggest that it is always better to be a hawk. However, a meeting of hawks often results in huge costs— including injuries or even death—to one or both individuals. Doves, on the other hand, escape with merely a temporary defeat. As a result, hawk and dove strategies can coexist in stable equilibrium in a given society.

In real life, one can see this and similar behavioural dichotomies in a wide variety of animals, ranging from frogs, rats, primates and even humans. For example, large frogs are able to use their sizeable vocal sacs to attract mates, while smaller frogs cannot do this and prefer to linger around larger males and take a chance by engaging in ‘sneaky’ matings with females. Such behaviour is also seen in other species—less sexually attractive ‘dove’ males wait near more attractive ‘hawk’ males in the hopes of sneaking a copulation with females attracted by the ‘hawk’ males’ displays. The ‘hawk-dove’ model explains how individuals can be successful despite being physically weaker: Individuals that are not strong can still be socially ‘smart’

.In primate societies, weaker individuals show tactical and deceptive behaviours toward stronger individuals, relying on strategy rather than brute strength. Insulin plays a role in strengthening cognitive abilities as well as altering behaviour; it has been shown to help thinking and problem solving on the one hand, and reduce aggression and risk-taking behaviour on the other. Therefore, it likely helps the weaker but smarter subordinate individuals. If this is true, then it is no surprise that the subordinate chimpanzees have high insulin levels and accompanying insulin resistance.

These results from animal research have inspired a completely new interpretation of the origins of T2DM in humans. According to this theory, the human analogs to hawks and doves are ‘soldiers’ and ‘diplomats’ (referring here to personalities, rather than actual professions). The soldier trait is characterised by physical strength and aggression, risk-taking, swiftness, injury proneness, and tolerance to physical pain and discomfort. A diplomat, on the other hand, is physically weaker but socially smarter; this condition is brain-dependent and involves social manipulation. In both animals and humans, behaviour has been strongly linked to insulin, cholesterol and cortisol levels. Levels of these molecules alter behavioural preferences, and, in turn, engaging in specific behaviours alters the levels of these molecules. Typically, strong, aggressive and dominant hawk/soldier behaviour is characterised by low levels of insulin, cholesterol and cortisol, as well as high insulin sensitivity. Conversely, dove/diplomat behaviour is associated with high levels of insulin, cholesterol, and cortisol, and low levels of sex hormones and growth factors.

The behavioural transition: from hunting-gathering to modern urban life

We evolved and lived as hunter-gatherers for millennia. But even in ancient human societies, the soldier-diplomat dichotomy existed: There were shamans or magic-men who would have hunted less and lived by shaping people’s faith. Over the course of modernisation, we have been engaging more and more in the diplomat way of life, and a majority of the population has lost its the hunter-fighter instincts—a by product of the transition from a muscle-dependent lifestyle to a brain-dependent lifestyle. This transition is associated with certain physiological changes in the body. Australian Aborigines are the classic example of what happens to human physiology during such a transition: Aborigines in urban environments rapidly become diabetic and hypertensive, but no longer experience these conditions after returning to the wilderness and resuming a hunter-gatherer lifestyle.

Though researchers have argued for quite some time that the Paleolithic diet is the critical factor, it is increasingly clear that the Paleolithic environment and behaviour are equally critical. The modern lifestyle is sedentary, and deficient in physical aggression, agility, endurance activities and quick and complex nerve-muscle coordination. These deficiencies bring about many changes in body chemistry; these are increasingly recognised as causing not only diabetes, but also many other modern lifestyle disorders. These are not superficial explanations; there is now detailed knowledge about how different behavioural strategies are associated with variations in gene expression and changes in metabolism, hormones, and immunity. More than 70 signalling molecules are now known to link behaviour to hormones, metabolism and immunity.

Modern humans are increasingly found living in crowded urban environments away from wilderness and serenity. High population densities create an anticipation of future food scarcity, since this is what happens in nature. Populations of wild animals periodically rise and fall; these ups and downs have caused animals to evolve the ability to anticipate starvation and store fat. Experiments in worms and fruit flies have shown that crowding induces fat storage. Perception of crowding also affects behavioural responses, favouring diplomat traits over soldier traits. It also affects many hormone levels in the body. The unprecedented overcrowding of cities and lack of serene natural places is likely to be an important contributor to changes in human health.

Hunter-gatherer and agricultural lifestyles were associated with frequent minor injuries and behaviours that anticipate injuries. Minor injuries maintain a delicate balance between central and peripheral immunity. Normally, minor injuries result in the movement of macrophages, a type of immune cell, to the skin. In the absence of injuries, macrophages fail to undergo this migration, instead remaining in the blood vessels, where they cause inflammation of the vascular tissue. Many of the molecules—particularly growth factors—involved in would healing are also shown to be essential components for the normal growth of pancreatic beta-cells that secrete insulin.

Does this mean that being a diplomat is wrong, and therefore leads to diabetes and other modern health problems? Not necessarily. Rather, the source of the problem is less being a diplomat than exhibiting a deficiency of hunter/soldier behaviours. In a non-violent society, these latter traits can be experienced in the form of aggressive sport and outdoor adventure. Physical exercise has long been known to protect against a number of modern disorders. Now we know that exercises are not mainly important for burning calories, but for filling a behavioural gap in our lives. Therefore it is the type of exercise that matters, not the number of calories burned.

Much of this new view of disease has originated in wildlife research. This is an important realisation for wildlife lovers, researchers, and managers. Not only can wildlife be observed through binoculars; they can also make us think and learn about our own lives and health. Wildlife research should focus on more than saving species; studies of basic animal biology can also help us improve our own lives. Our new understanding of type 2 diabetes best illustrates this potential.

Milind Watve is a professor of biology at Indian Institute of Science Education and Research, Pune, milind@iiserpune.ac.in.