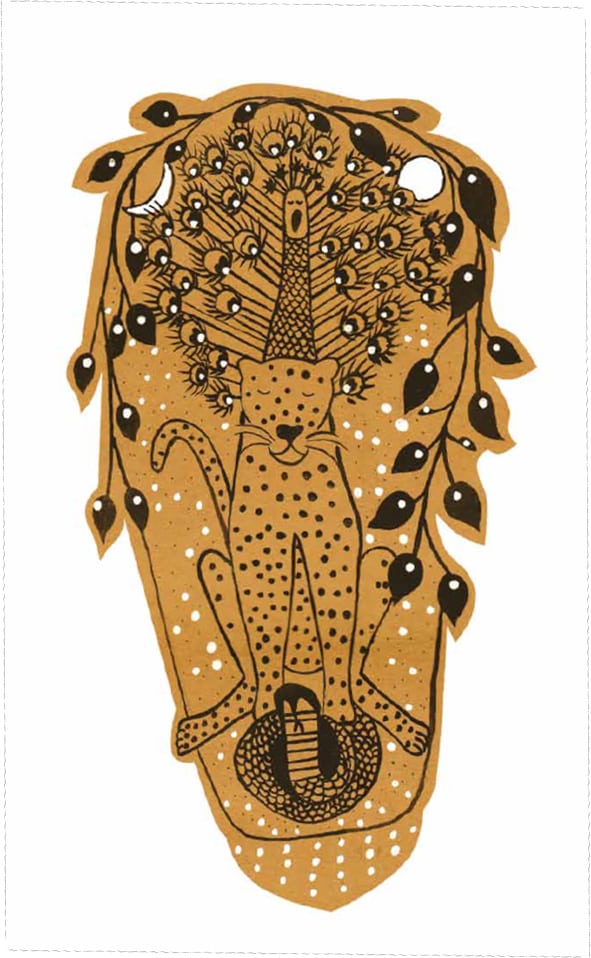 NEGOTIATING LIFE WITH LEOPARDS AND MODERNITY IN A SACRED-MORAL LANDSCAPE

The winter sun beat down as thin slivers of water irrigated an otherwise parched land. I was riding through familiar back streets, making our way to a remote corner of the maze of valleys cut by rivers that make up Akole taluka in northern Maharashtra. These valleys were historically arid and parched outside the monsoons. Irrigation schemes over the last two decades have transformed them into lush croplands producing sugarcane, grains, a variety of vegetables and dairy products.

The landscape would appeal to poets and geologists alike, for its rugged beauty, but it held no charms for us. I was here because people and leopards lived together in this human-dominated landscape. Conventional wisdom makes the presence of these big cats in such an area seem counterintuitive; the area is neither close to any conservation protected areas nor does it have any wild ungulate species that we imagine support large carnivores. Yet, the leopard population in the area is stable and in fact breeding. They live on a varied diet of dogs, pigs, chicken and rodents; not exactly our conception of a noble large cat but effective for survival nevertheless. Furthermore, they live not in ‘forests’ but in the safety of sugarcane fields, where they remain undisturbed for months on end.

In my initial visits to the area, I had braced myself for what I presumed would be overt conflicts between people and leopards. What I found instead, was a situation where people and leopards dynamically shared the landscape with a complex relationship ranging from conflicts to coexistence. Fascinated, I set out to probe these interactions and map the factors that create conflict and/or facilitate coexistence.

I explored the political, social and administrative institutions and strategies that were employed by people to share the landscape with leopards. The present journey I was making, with three local informers, was to the tribal belts, to engage with a cultural institution built around the large cats.

The road to the tribal areas penetrated deep into the mountains of the northern tip of the Western Ghats. These tribal areas are characteristically drier than the valley floors that are irrigated by water taken from the river systems that drain these areas. Besides being drier, the tribal areas are also perched on the political periphery of developmental activities, be it physical infrastructure or educational facilities or socio-economic integration. The tribal communities that live in these hills are primarily Thakkars and Mahadeo Kolis. They are primarily agro-pastoralists, though several members of the communities are also employed in the formal and informal sectors outside the village. Though good-natured and hospitable, the community I was visiting seemed reserved and guarded to my visible presence in the village. The reasons for this apparent wariness became evident in due course, but more on that later.

The time I spent in Akole, brooding over its reality, led me to realise that the physical landscape was pregnant with meaning, acquired through people’s interactions with each other and nonhuman species. In this sacred-moral landscape, the large cats had a towering presence that was difficult to ignore. The tribal communities have deified the large cats in the form of a local village deity called Waghoba (the female equivalent is Waghjaimata, but she has a more spatially and morally restricted presence). To believers, Waghoba is at once a benevolent and violent deity with a strong sense of morality. This deity delineates space allowing people to intensively use part of the landscape, while also allowing space for wilderness outside the domain of the village. These communities are conscious of the fact that their long-term survival depends on husbanding resources in both domains. In this context, Waghoba plays the role of a guardian deity, enabling community members to live in the landscape as long as they respect his presence. Rituals like Waghbarsi are dedicated to appease Waghoba while also expressing gratitude for his generosity and benevolence.

Over the years, I had encountered several people in the valley who had scorned the Waghoba and associated rituals. They dismissed them as ‘backward’ and ‘blind superstition’ (though many of them later admitted that they did participate in the rituals, which they claimed are a social event rather than a cultural one). There were also people in the town who held the area as a production landscape meant for use by people, who petitioned the forest department for compensation for depredation losses and insisted that the leopards be removed from the area. Such demands are rare in the tribal area, be it for compensation or removal of leopards. But then the tribal communities have fewer resources to spend on negotiating with the forest department and even less access to political patronage. Instead, they negotiate with the large cats directly.

Here the socio-cultural institution of Waghoba plays a central role. As a deity, ritualised negotiations are only one aspect of adapting to the presence of large carnivores in the landscape. I hoped to witness this negotiation and interview members of the community who participated in the rituals. Once we arrived in the village and were introduced to our hosts, I wondered if we would head off into the hills for the Waghbarsi rituals, as is the practice amongst communities living in the valley. Our host laughed and pointed to a hut in the heart of the village and said it is the Waghoba shrine where the rituals are performed. Most other Waghoba shrines I had visited were sited in the hills and at important crossroads. I wondered why this shrine was located in the heart of the village but was told that its significance was lost in antiquity.

After a quick meal at the host’s home, we planted ourselves near the Waghoba temple. Some village youth were milling around and started to chat with us. On hearing that we were interested in the Waghbarsi, they invited us into the temple and explained that Waghoba is a benevolent deity who ensures that no harm befalls the village. However, the youth added ominously, if one does not perform all the rituals with genuine piousness, the leopards and the tigers in the hills would harm our interest within three days. The youth named several individuals who had lost livestock to leopards till they performed rituals to appease Waghoba, after which the leopards caused them no harm! The rituals got underway with male members of households in the community taking turns to offer a rooster at the Waghoba shrine accompanied by a prayer; occasionally a dry coconut was broken and a coat of vermillion and oil was added to the shrine. The rooster was taken outside the shrine, pinned down and offered water before its throat was slit. It was then beheaded and the head was respectfully placed at the Waghoba shrine as a symbolic offering. After the bird was plucked and cleaned, it was taken back to be consumed by the family, relatives and neighbours. The temple priest and the youth had also set up a make-shift kitchen beside the temple, where they cooked a broth of chicken, rice, lentils and vegetables. This was later distributed among the children of the village and people gathered at the temple. The last animal to be sacrificed was a goat, which was owned by the whole community. After being ritually slaughtered, the head and hooves were offered at the shrine, while the rest of the meat was distributed amongst the villagers. Other Waghbarsi rituals I had observed, and heard reports of, did not involve animal sacrifices but involved a vegetarian feast instead. The gathering at this shrine pragmatically informed me that the offerings are symbolic, depending on the people participating. The important aspect of the ritual was piety and gratitude towards Waghoba. 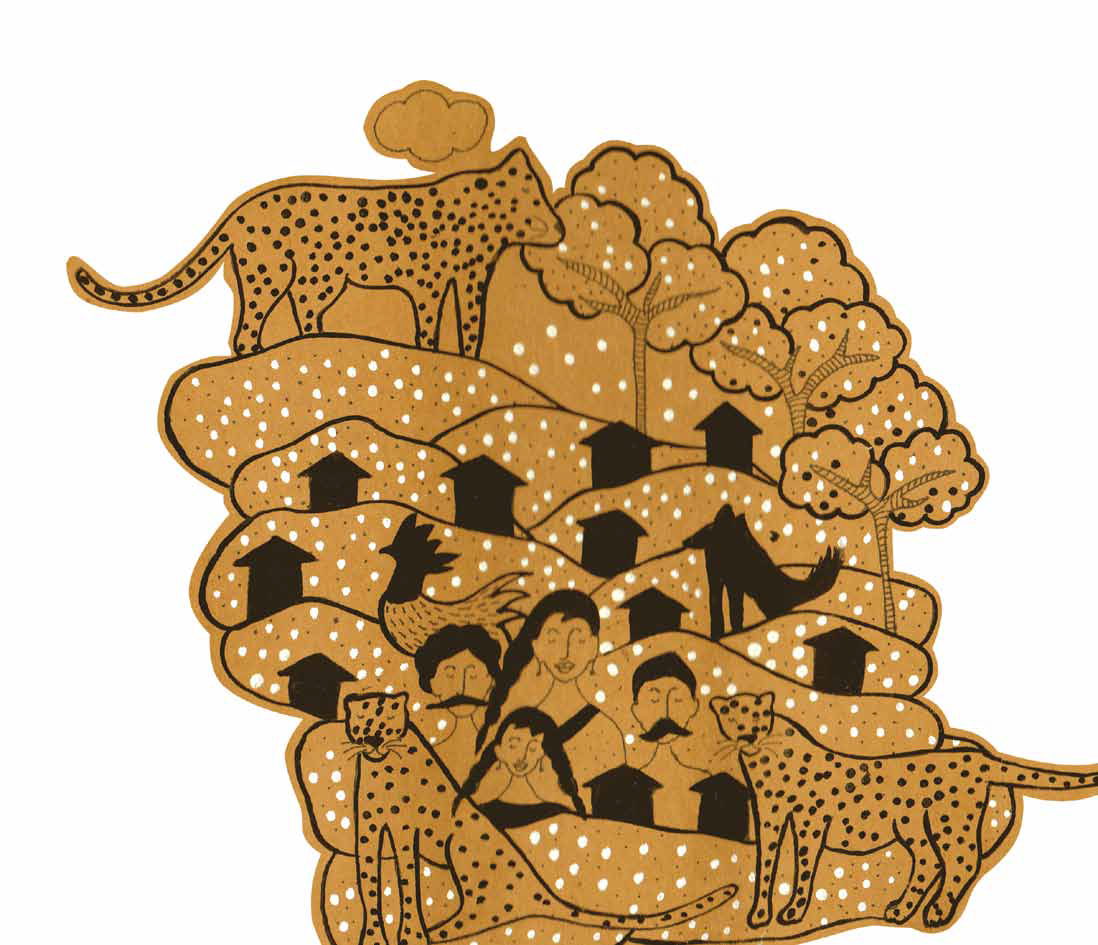 Naively, I asked if the leopards and tigers in the area visited the shrine. The priest smiled and one of the youth said that earlier the shrine was uncovered and they would often see pugmarks of the big cats around it. Now that the shrine is covered, he added, they see pugmarks around the area but not inside the shrine. On being asked if they feared these big cats that could very easily kill a human, the gathered villagers responded that they were gods and would never harm anyone unless provoked. An elderly gentleman spoke up, saying that Waghoba governed the life of the village and wilderness. He concluded that Waghoba belonged to their pantheon of village deities that ensured that the villagers did not suffer undue misfortune.

I discovered that no one in that hamlet had suffered losses due to leopards. However, some people in the neighbouring hamlet had suffered depredation losses. The people at the shrine had a ready explanation for this claiming that the individuals had stopped doing these rituals or were doing it half-heartedly. Waghoba had punished them, and now they were once again participating in the rituals as they had for generations.

Towards the end of the day we headed back to the host’s house for dinner. I witnessed how carefully the livestock in the village was protected for the night. Our host said it was their responsibility to take care of the livestock. The big cats needed to eat meat as that was their way of life, but as agro-pastoralists the villagers could not rely on the benevolence of Waghboba alone but also needed to protect their livestock. As we were about to leave, we heard rumours that some villagers claimed we were from rationalist groups and had come to ensure that they would not be able to perform these rituals in the future. This explained their initial guardedness. However, in retrospect, I realise that these rumours were fueled by the tension between upholding traditional socio-cultural institutions anchored to their sense of identity and negotiating modernity.

On the one hand is the institution of Waghoba, which enables the community to adapt to living with large carnivores. The institution also underpins shared values that hold the community together and provides a context for symbolic negotiations with the large cats. This intimacy with the large cats has yielded a deep respect for them, which ensures that livestock in these parts are well protected. Even when there are depredation losses, no compensation claims are put forth to the forest department (partly due to their socio-cultural beliefs and partly due to the complexity of bureaucratic procedures). Furthermore, the ritual ensures that the community members eat a protein-rich diet, atleast for a few days of the year. However, many community members, especially the youth, are aware that outsiders do not understand their myths and beliefs and regard them as superstition.

On the other hand is modernity symbolised by the state, NGOs, technology and interaction with nonlocals. In this context, the leopard and tiger are large carnivores protected by the state and its law. Depredation losses are partly compensated by a fixed rate (depending on the forest department), but otherwise these communities have no option but to tolerate the presence of large cats in their midst.

The interactions between large carnivores and people in a morally and politically-charged landscape is complex and dynamic. The choices are stark but very real. Communities and individuals face divergent and contradictory value systems everyday. Within larger realities, both facilitate large carnivore conservation but one encourages coexistence through existing socio-cultural institutions, while the other imposes it through the state’s policing mechanism. While neither system is perfect, a little pragmatism can help integrate these two very different conceptions of nature and large carnivores. The outcome of these complex negotiations is far from clear and calls for a new (political and conservation) morality. Unfortunately, this window of opportunity is small and lacks an ‘undo’ button.

Sunetro Ghosal is a Research Fellow, Department of International Environment and Development (Noragric) at the Norwegian University of Life Sciences (UMB), Norway. ghosal@mtnl.net.in