Is rewilding viable under climate change?

In theory, yes, concludes the paper by Jarvie and Svenning (2018), which investigates if human-mediated climate change is likely to reduce the rewilding potential of large-bodied animals (megafauna). Climate change is recognised as a major threat to global biodiversity and ecosystem functions, mainly because under climate change, temperatures and precipitation may exceed a species’ physiological tolerances. Megafauna have had higher extinction rates and range contractions than other species, often leading to the loss of ecosystem functions, notably a reduced capacity to maintain biodiversity. This recognition has led to an increase of rewilding campaigns to restore self-regulating, biodiverse ecosystems. Rewilding projects often involve reintroduction of extirpated animal species, or the introduction of functionally similar species to replace globally extinct species, aiming to restore top-down trophic interactions such as predation and herbivory to ecosystems.

However, climate change may alter the potential suitability of habitats for many species commonly discussed as rewilding candidates. As a consequence, current or proposed (re)introductions of species may be to areas that, under future conditions, are climatically unsuitable. This could mean major investments in (re)introducing species to areas that may become unsuitable habitat in the future, for example in areas that exceed the species’ maximum temperatures or that are unable to support their primary food source in future climate scenarios.

To assess the magnitude of this potential problem, Jarvie and Svenning intersect climatic tolerance estimates with future climate scenarios of 17 megafauna species commonly discussed for rewilding, including iconic species such as African savannah elephant, various rhino species, and lion. Since the geographic and environmental ranges of many large animals are already seriously restricted by humans, they quantified climatic tolerances of these species according to their estimated natural ranges in the absences of human-induced range contractions.

The results suggest that, for many species, the total amount of area with a suitable climate remains relatively similar from current to future climates. This means that, even under future climate change, trophic rewilding remains a viable option for restoring self-regulating biodiverse ecosystems. While there are other constraints (social acceptance, species composition and other ecological variables), climate change in itself does not appear to be a major future road block to implementing rewilding. 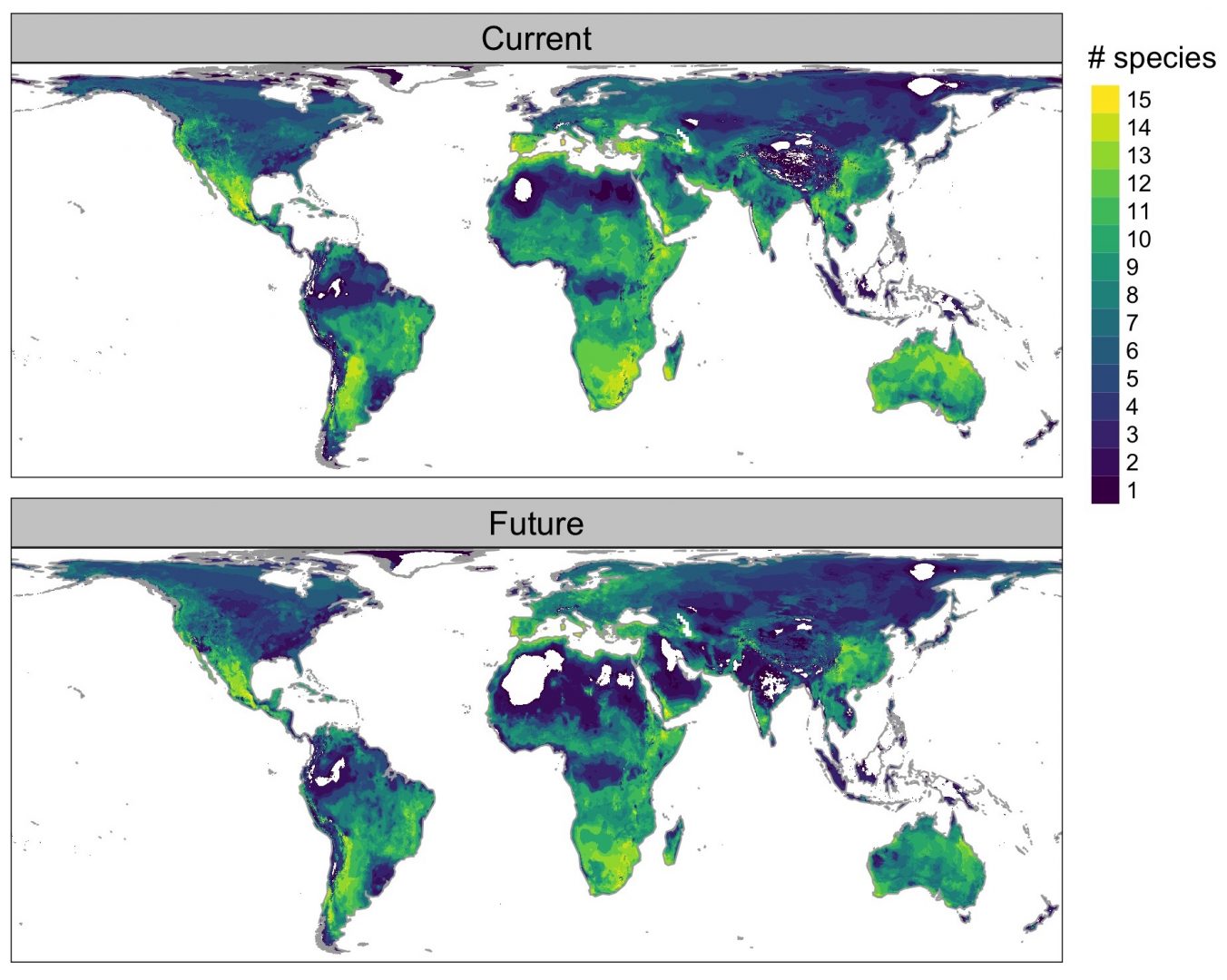 Dr. Scott Jarvie is a Postdoctoral Research Fellow at the joint Ecoinformatics and Biodiversity Section (ECOINF) and BIOCHANGE – Center for Biodiversity Dynamics in a Changing World, Department of Bioscience, Aarhus University. He is an ecologist and conservation biologist with a strong interest in restoration of species populations and ecosystem function.

Dr. Jens-Christian Svenning is professor and VILLUM investigator at Department of Bioscience, Aarhus University, where he leads the Center for Biodiversity Dynamics in a Changing World (BIOCHANGE) and Section for Ecoinformatics and Biodiversity. He is an ecologist and biogeographer with strong interests in global change, ecological restoration, and human-nature relations.

Dr. Ashley Pearcy is the Science Communication, Outreach and Education Instructor for the Center for Biodiversity Dynamics in a Changing World (BIOCHANGE) in the Department of Bioscience at Aarhus University. She is an ecologist and conservation biologist with a focus in management strategies and risk assessments.