Is the Wildlife Protection Act being broken in moving potentially ‘dangerous’ animals?`

In 2016, a remarkable animal came to Delhi’s Yamuna Biodiversity Park. It came quietly, eating secretly, staying hidden, shrouded in the enigma it is known for. A leopard had come to a ‘park’ meant to restore Delhi’s biodiversity. It may have walked along the Yamuna river, crossing its alluvial flood plain; it had settled in on pig and ungulate prey in the biodiversity park. The scientists who had worked for years at restoring the area were elated, seeing the leopard’s picture in a camera trap. A top predator making itself at home was a validation of their efforts – the area was historic range of the leopard, and not so long ago, nothing would grow on the barren, saline soil. But villagers living around the area did not want a leopard there. They cleared vegetation cover and met the local politician. The forest department, instructed by the Delhi government, moved quickly: a  trap was set for the leopard, it was caught and sent to an undisclosed location. Unofficially, this location was revealed to be forests in Saharanpur (Hindustan Times, 2016).

Neither Yamuna Biodiversity Park nor Saharanpur are protected as wildlife sanctuaries, and it is doubtful what future a leopard would have in Saharanpur, where it was sent to ‘stay’, like a pet dog asked to sit in the corner. Would it be caught again if Uttar Pradesh local administration deemed it dangerous?

But at least for Delhi, the Big Cat was out of sight, and so out of mind.

In January 2019, the Gujarat forest department quietly captured 15 mugger crocodiles. This was in order to safeguard tourists who would visit the state’s new mega tourist offering – a gigantic statue of Vallabhbhai Patel, the Statue of Unity. Crocodiles living in the pond where an aircraft ferrying tourists was set to land had to be moved. After the first 15 crocodiles were moved, the forest department said they were not sure how many more they would translocate, or how many crocodiles were in the ponds. Some reports suggested close to 500 crocodiles would be moved away (Indian Express, 2019) – a rough estimate not based on systematic estimations. Outrage at the unsustainability—and the unfairness—of the plan has halted further translocations.

The Wildlife (Protection) Act, 1972, says a Schedule 1 Animal—like the mugger crocodile and the leopard—can only be captured if it is proven to be a danger to human life. Neither Delhi’s leopard nor Gujarat’s muggers had yet proved to be a danger to human lives. They were trapped because of their potential for danger; like junking a car because it may possibly cause an accident.

Many more efforts to catch leopards have continued. In May 2019, a trap was laid for a leopard that was frequenting a village in Sirumugai forest range in Tamil Nadu. It is interesting to note that last year, another leopard was trapped in a village in Sirumugai and then transported away to an undisclosed location.

So what does a tourist site, a village in forest land and a biodiversity park have in common?

Nothing at all, save the fact that human society decrees wild animals should not live there. The idea of which animals to remove is tempered by perceptions of danger. Both the crocodile and the leopard are top predators. Not only do they have disproportionate impacts on their ecosystems, they also occupy psychological spaces of unease.

But the problem needs further interrogation. If animals are going to be trapped in biodiversity parks and forest land, where exactly are they supposed to be? 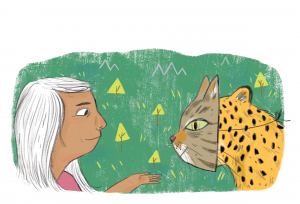 The issue of spatiality of the animal sits through the lens of human perception on where wildlife belongs. A pond that newly ‘belongs’ to tourism, no longer belongs to a predator. Such a predator is best relegated to a separate, ‘out of sight, out of mind’ place. These kind of knee-jerk translocations go against any understanding of the subject and its preference for a home range.

The forced relocation of animals also demonstrates a particular view of Nature. An area meant for reclaiming Delhi’s habitat is meant just for gentle nature; the proverbial stroll in the park with butterflies and birds; not for anything as wild or untameable as a leopard. This connects to the first point: Nature is acceptable as long as it is not dangerous to us.

“Relocation of crocodiles to a suitable location is fraught with potential problems and must be done under advice and supervision from competent experts or there is a great risk of killing them,” says noted crocodile conservationist Romulus Whitaker. “This will not solve the problem.”

It is clear that relocation of crocodiles is not a simple matter, and relocation may lead to a new conflict situation.

Does the law and its schedules matter?

Here is what the Wildlife (Protection) Act, 1972, says on catching protected wild animals. The Act is divided into Schedules that afford protection—Schedule I being the highest level. A Schedule I animal can be trapped only if it has become a danger to human life, and through     an order given by the Chief Wildlife Warden. There are further safeguards in section 11 of the Act. The first is the fact that it is not mandatory for the CWW to issue an order for hunting   (this includes trapping) the moment an animal has become a danger to human life. The   exercise of the power is discretionary. Secondly, the order has to be a detailed speaking order which discloses why there is no other option but to hunt the animal. In the case of the Delhi leopard, Section 11 was invoked, but this was pre-emptive. The leopard had not yet proved to  be a danger, nor had it attacked anyone.

For other Schedules, the animal can be trapped or hunted it if has become a danger to human life or property or standing crops, again through a written order by the Chief Wildlife Warden (CWW). Wild animals can be trapped for management, scientific research and translocation with prior approval of state government, and in the case of Schedule I species permission needs to come from the Central Government.

Whitaker for example, noted that it is highly unlikely that the Central government granted necessary permissions to the Gujarat Forest Department to capture and relocate the Schedule I protected crocodiles.

The Wildlife Protection Act is constantly being contravened. Consider this: Crocodiles are given even more protection through the Act. Birds and reptiles are accorded a higher level of protection in the Act than in comparison to mammals. This is because under Section 2 (16) of the Act, hunting has been broadly defined to include “capturing, coursing, snaring, trapping and every attempt to do so.” However, in respect to birds and reptiles, the definition of hunting includes ncludes, “disturbing the eggs or nests of such birds and reptiles.” Thus, even the act of ‘disturbing’ the nest or eggs of crocodiles is covered under the definition of hunting and there is no requirement for the actual killing or capturing of the Crocodile for it to be considered hunting.

The question of where the animals are taken is also an important one.

“Under section 12 bb (i) of the Act, the Chief Wildlife Warden can give a permit in writing for the purpose of translocating any wild animal to an alternative, suitable habitat. The use of the expression ‘alternative suitable habitat’ by the legislature is significant since it mandates that the CWLW must be satisfied that the area where the animal is being relocated is an ‘alternative’ habitat which is ‘suitable’ for the animal,” says environmental lawyer Ritwick Dutta.

The area must also satisfy the definition of ‘habitat’ which is provided in the WPA viz an area “which is a natural home of any wild animal” [Section 2 (15) of the Act]. Thus shifting an animal to an area which is not a ‘natural home’ of the wild animal would be contrary to the provisions of the WPA. Thus, he stresses the law is being violated on several counts— not only are wild animals being moved without reason, they are being moved without any credible assessment of suitable habitat

Are we solving the problem?

The view of ‘problem’ animals, confined to a view of Nature as desirable as long as it is not dangerous, paints all so-called unwanted animals in the same way. The answer is reached before the question is posed: the answer is that the animal must be removed. In this sense, there is no difference in the way the leopard or the crocodile is treated, though both pose different kinds of risks when relocated forcibly. The ‘answer’ is also not sustainable and reached without the use of any modern technologies. Leopards are often moved, shot or trapped without exercises done to identify individuals. In this case it is hard to tell if the same individual recolonizes the area it was relocated from, as leopards are known to do.

The final question to ask is: what are the other lenses to look at the issue, apart from legalities. Surely, best practices need to come from an understanding of the subject. Local perspectives of living with wildlife assume significance here, and should be learned from. For instance, people in Charotar in Gujarat, and Kotmi Sonar in Chattisgarh know how to live with mugger crocodiles. Instead of setting in place catch-them-by-the-tail, all-guns- blazing relocation, we could learn from them.

We need assessments to understand if we have a problem on our hands in the first place, or whether management solutions can involve not actually moving animals. Finally—and it seems counter-intuitive to state this—any move to take care of a problem has to include a genuine attempt to solve it.

Neha Sinha is with the Bombay Natural History Society. Views expressed are personal. She has a chapter in the newly published, ‘Nature Conservation in the New Economy’, ed Ghazala Shahabuddin and K Sivaramakrishnan.

Sheena Deviah by day works as an art director at a children’s book publisher and by night she enjoys working with her hands while surrounded by her three rowdy cats. She loves the company of messy art supplies and is constantly fascinated by nature, both inside and outside.